A track-focussed sportbike like the KTM RC 390 may just be what an adrenaline junkie motorcycle seeks for thrills and dollops of entertainment on two wheels. But in the practical scheme of things, where easy rideability, increasing competition as well as sales volumes, seem to rule, a focused, track-oriented approach may not always be ideal, more so, for a manufacturer like KTM in India. The premise of the KTM RC 390 in India was to offer sporty performance, aggressive ergonomics, suited more for the racetrack enthusiast than for everyday duties, since it was first launched in 2014.

Suspension is all-new, the airbox is 40 per cent bigger, and the new curved radiator and redesigned fairing helps blow hot air away from the rider.

In the 2022 KTM RC 390, KTM India’s idea is to make it appeal to a wider range of riders, make it more street friendly and the list of changes on the new model seem to reflect that purpose. 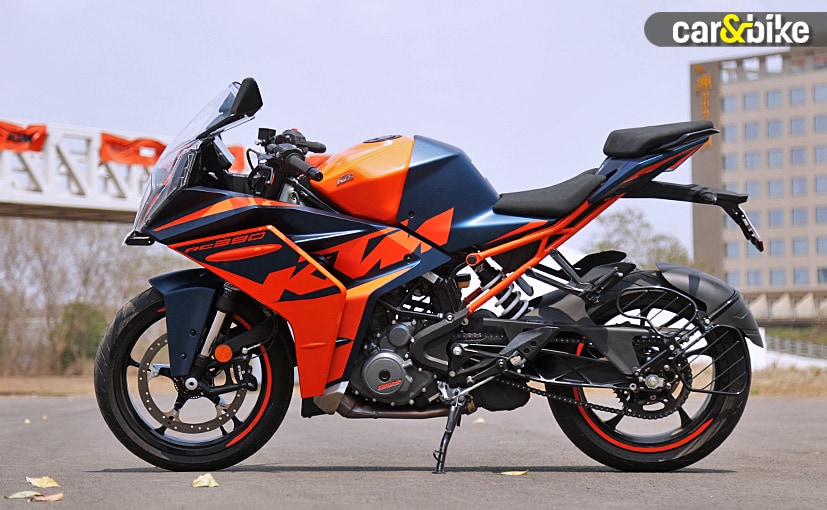 The new KTM RC 390 gets a new design, new colours, and a whole lot of other changes, including new features, more comfortable ergonomics and also boasts of better acceleration, wider torque spread and marginally more torque. But does it deliver to make more riders jump astride the new RC 390, to use it as an everyday streetbike. We spend some time with the new KTM RC 390 at Bajaj Auto’s test track at Chakan, on the outskirts of Pune, to see what all has changed and what it offers in its latest avatar. 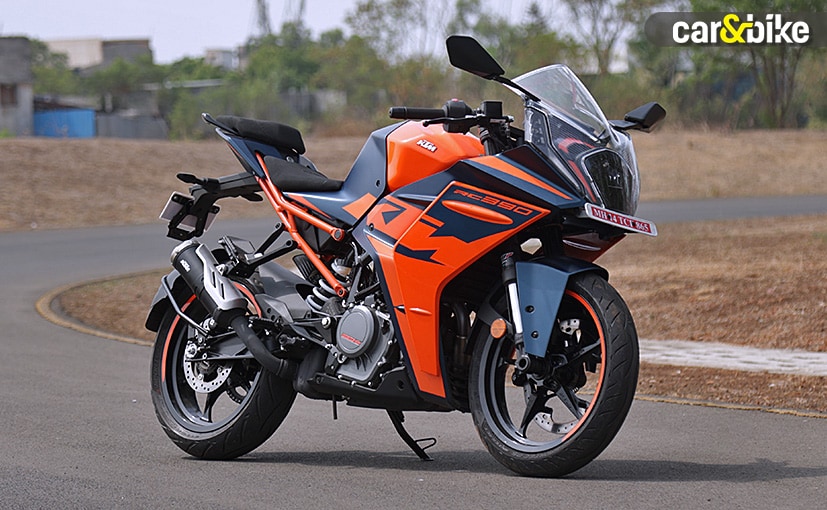 The first thing you’ll notice about the new KTM RC 390 is the face, inspired by the KTM RC 16 race bike. It’s a bit of a hit and miss design, and opinions will certainly be polarized about the way the bike looks now. To me, the outgoing model had a sharper and more handsome face, but the new design does begin to grow on you, and the new LED headlight should offer better light spread than the bulb-type unit on the previous generation model. The curved radiator design is also new and is 10 per cent bigger than before, and the fairing has been redesigned as well to divert hot air away from the rider’s legs. 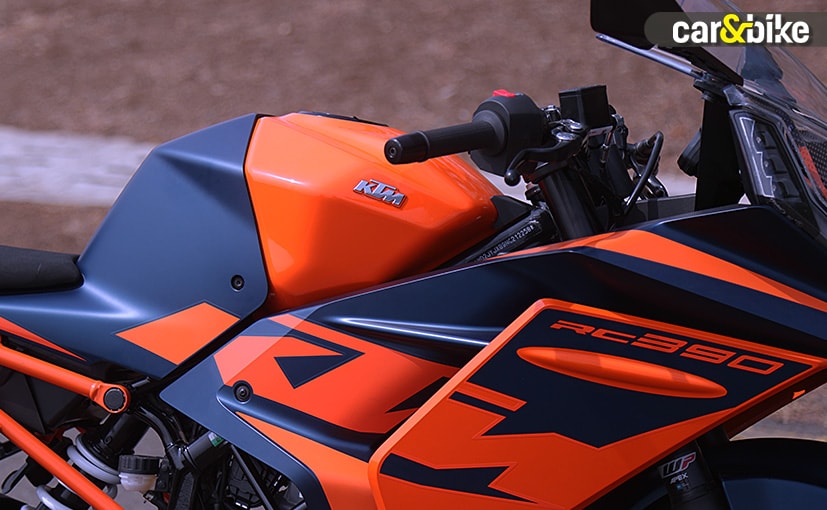 The fuel tank now has more capacity of 13.7 litres, and the clip-on handlebars have been moved up.

The fuel tank has been redesigned too, and now gets more capacity, with 13.7 litres, so the RC 390 will get more range between refuels, compared to the 9.5-litre fuel tank of the outgoing model. And despite the increase in fuel tank capacity, weight saving measures elsewhere has shaved off 3.7 kg in the dry weight of the new model. With a 172 kg kerb weight, it’s still a full kilogram lighter than the outgoing model. The bolt-on subframe has added 0.1 kg weight, but the wheels, brake discs, hollowed-out wheel axles have all contributed to saving weight. In all, while being more rigid, the wheels have become 1.1 kg lighter each, and the brake discs have also lost 1.1 kg weight. 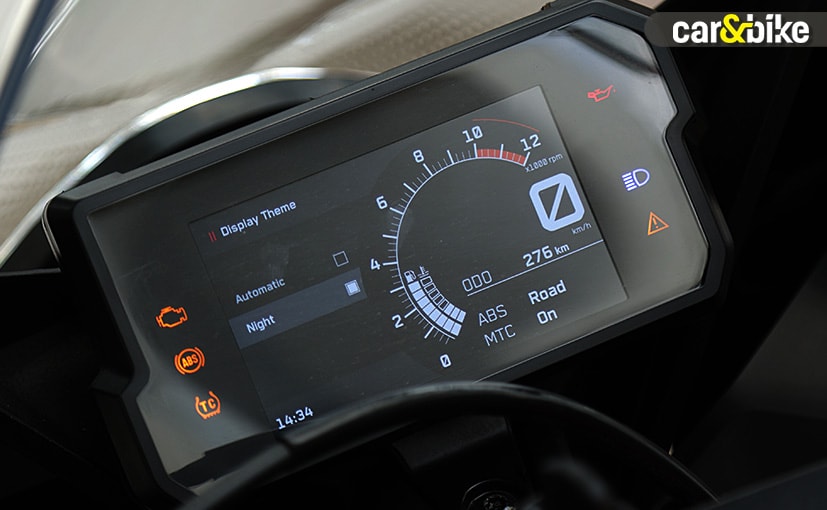 TFT instrument console has day-night feature, and also gets controls for ABS, traction control and other nifty features.

On the features list, the 2022 KTM RC 390 gets the same full-color TFT screen as the 390 Duke, and it gets auto-dim feature, night mode, and also gets Bluetooth connectivity through the KTM My Ride app for music and calls. But the lack of navigation on the latest generation RC 390 is a miss which could have upped its feature quotient for sure. 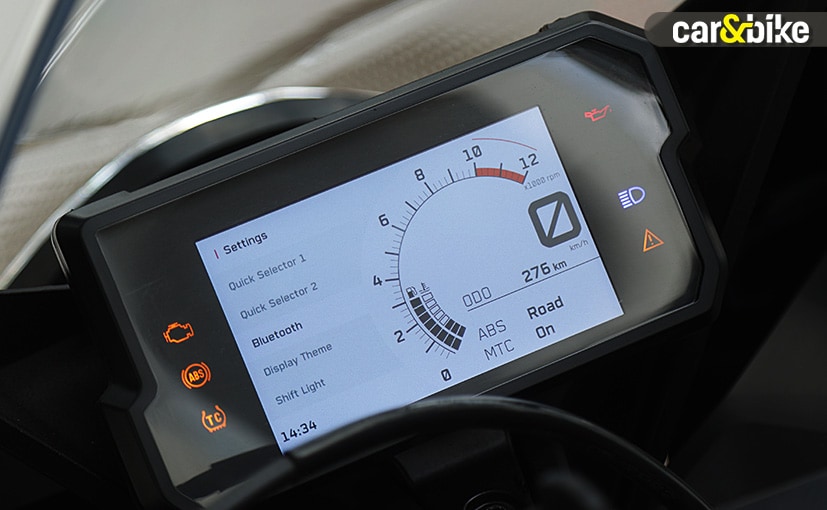 There’s Bluetooth connectivity through the KTM My Ride app, but navigation is missed.

Along with the visual changes, the RC 390 also gets new colours, in the traditional KTM Orange, as well as the KTM Factory Racing Blue. And dimensions have marginally changed as well, with a 6 mm longer wheelbase, at 1347 mm, and 3 mm more ground clearance, which is now 153 mm. The most significant change is that the clip-on handlebars have been moved 14.5 mm higher, but these can be moved lower with the addition of spacers, for more aggressive track use, if required. 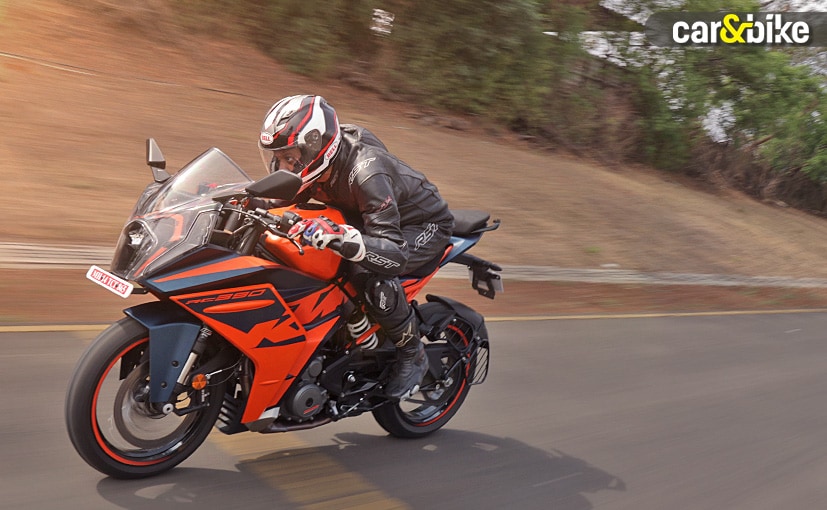 The engine is the same 373 cc single-cylinder unit as before, putting out 43 bhp at 9,000 rpm. But peak torque has increased to 37 Nm at 7,000 rpm. Overall throttle response has become smoother and crisper, and acceleration is faster.

The 373 cc, single-cylinder, liquid-cooled engine remains the same, and puts out an identical 43 bhp at 9,000 rpm as before. But with a 40 per cent bigger airbox, KTM says torque spread has improved over low and mid revs, and peak torque has actually increased by 1 Nm to 37 Nm at 7,000 rpm. The engine does feel more tractable than before, particularly in the mid-range, but the biggest takeaway is that throttle response feels smoother and crisper across the rev range. And when you do open the throttle mid-corner, power delivery feels strong, but smooth, without any sense of jerkiness, so newer riders will welcome the smooth throttle response in the RC 390’s power delivery. 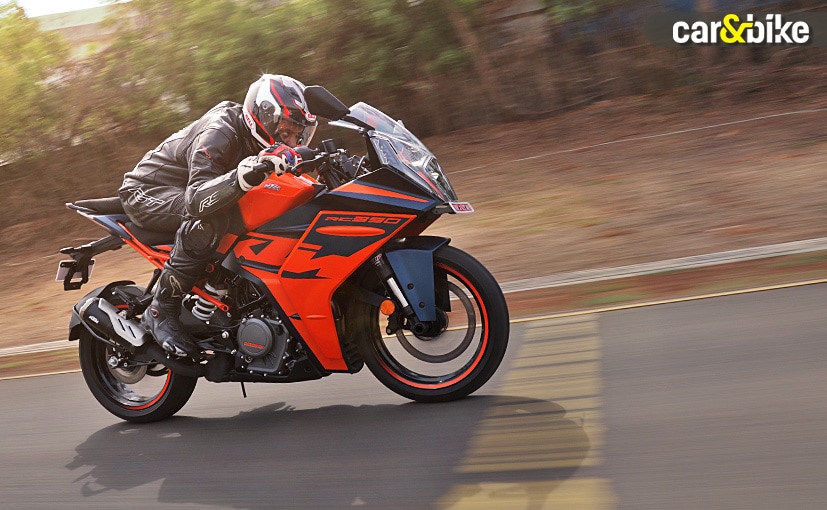 According to KTM, acceleration times have also improved, with 0 to 60 kmph achieved in just 2.7 seconds, from 3.2 seconds in the earlier model. And acceleration from 0 to 100 kmph is now achieved in 6.3 seconds, from 7.1 seconds in the outgoing model. The quickshifter offers effortless upshifts and downshifts, and while it may not be as smooth in city speeds, at low revs, on the test track, with revs kept close to the redline, the quickshifter works seamlessly. 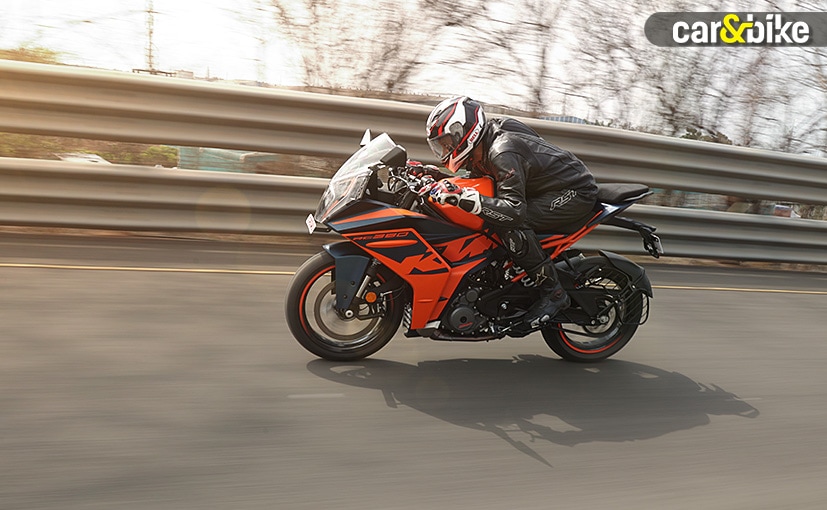 Out on the test track at Chakan, we saw a speed indicated top speed of 165 kmph.

On the back straight of the Chakan test track, we saw a speedo indicated top speed of 165 kmph, before it was time to hit the brakes. The brake discs are lighter than before, but stopping power is superb, offering quick deceleration from very high speeds, and without any drama. And yes, there’s an inertial measurement unit (IMU) which powers the cornering ABS, and there’s also traction control for added safety under all conditions. For expert riders, there’s also the Supermoto ABS mode, which switches off ABS on the rear wheel. 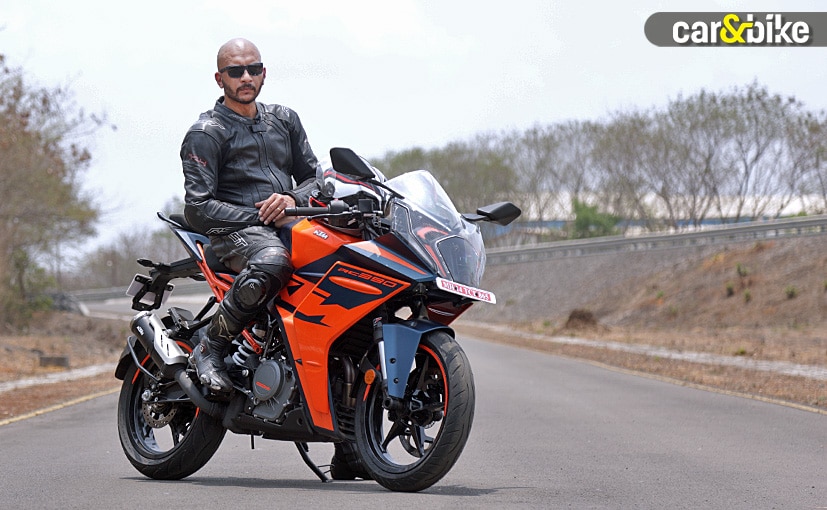 Getting astride the new RC 390, the first noticeable change is the riding position. The ergonomics aren’t as committed as before, and the bike has now definitely become easier for everyday riding. And when the corners do come up, the chassis retains superb balance, and the sticky Metzeler tires come together to offer sharp and confident handling. Scraping knee pucks around the corners or around the parabola of the test track feels intuitive and effortless, and even over some road undulations around the far corner, the bike remains planted and retains its line with razor sharp accuracy. 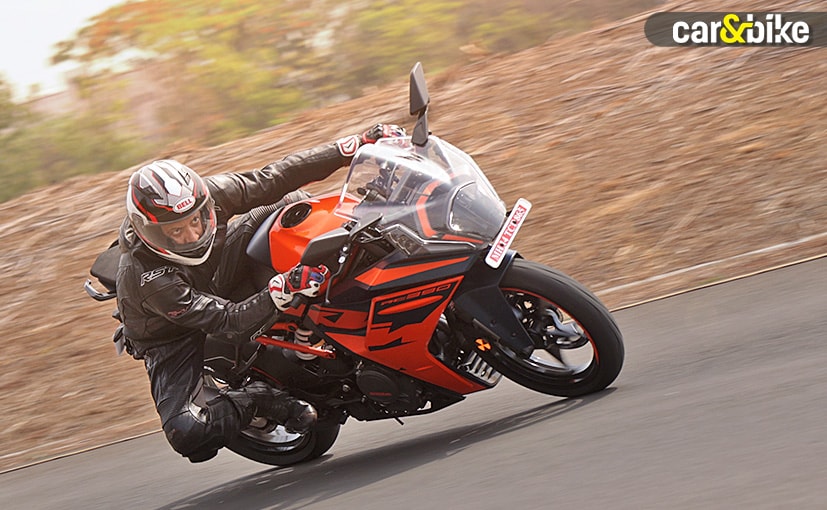 The KTM RC 390 offers razor sharp handling, and mid-corner corrections have become smoother, with an apparent smoother power delivery across the rev range.

The chassis is now a split steel trellis design, with a bolt-on rear subframe, but if it’s sharp handling one is looking for, the 2022 KTM RC 390 has enough and more, to enable experienced riders to explore its full potential and for newer riders to improve their riding skills. The suspension is all-new too, with WP units both front and rear. The 43 mm upside down fork is non-adjustable on the India-spec model, while the European model will get fully adjustable forks. But the monoshock gets 5-step preload and damping adjustability. 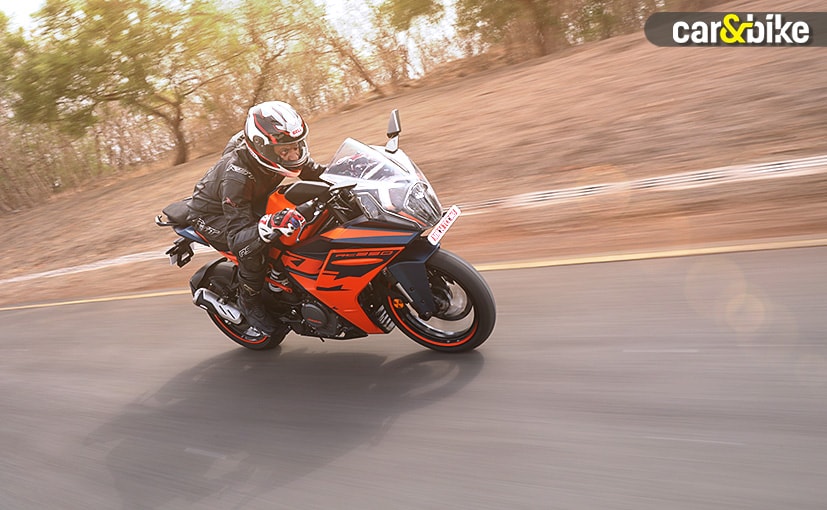 The 2022 KTM RC 390 has become a more accessible and friendlier sportbike. Yes, opinions may be polarized over the changes in design, but overall, in its latest update, it has definitely become friendlier and easier to manage.

The new KTM RC 390 certainly has become an easier and more accessible sportbike. KTM’s slogan, “Racetrack DNA for the street” certainly underscores the intent of the updates the RC 390 has gone through. For someone looking to upgrade from a smaller motorcycle to a true-blue sportbike, or even for someone considering a first sportbike, the new RC 390 certainly makes a very strong case to be on the shortlist of considerations. Yes, some could argue that the KTM RC 390 has lost its edge, but overall, the updated model will make it appeal to a wider range of riders with varying riding skills and experience. 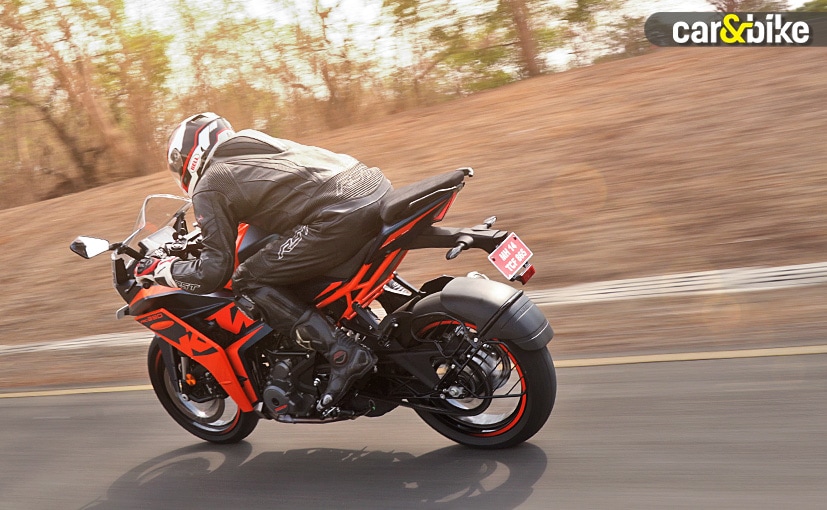 The 2022 KTM RC 390 certainly has transformed into a motorcycle which is better suited for everyday use than the outgoing model.

With the new updates, aimed at practicality and comfort, the 2022 KTM RC 390 certainly has transformed into a motorcycle which is better suited for everyday use than the outgoing model. And for the minority of users who would want to cut their teeth on a racetrack, the RC 390 still offers a potent and capable track tool. Prices though have gone up by almost ₹37,000, but in its segment, the 2022 KTM RC 390 still makes for a very strong case, as a performance-oriented and well-equipped sportbike!