The Mercedes-Benz S-Class is widely regarded as the best car in the world. That’s because it sets many luxury benchmarks and has won a whole of lot awards too, the most recent one being the premium car of the year award at 2022 car&bike awards. But is there a way to make this supposed best car even more luxurious? Well yes if you give it the Maybach treatment. The German luxury carmaker has launched the Maybach S-class in Indian in 2 variants. The S 580 4Matic is the one we’re driving and yes it is assembled at the company’s plant in Chakan, Maharashtra. There’s also the more powerful and more expensive S 680 4Matic that is being imported.

The Maybach grille with vertical slats is different from the one we’ve seen on the S-class.

If you do decide to buy the Maybach S-class, you will want your car to look rather different from the regular S-class. And that is exactly what Mercedes-Benz has done with this new car. The big highlight is the Maybach grille with vertical slats instead of the horizontal ones we’ve seen on the S-class, and they come with a nice 3D effect. And then you have a raised chrome strip on the bonnet which looks distinct and very premium. A big highlight also are the digital lights on the car which have 3 strong LEDs and each the sets has 1.3 million micro mirrors to give you the best possible throw. 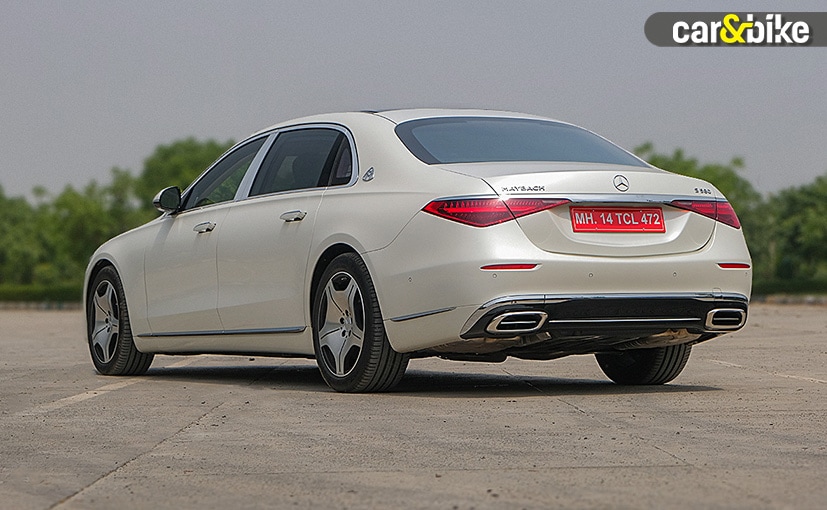 On the profile, you get a brand-new set of very nice looking 19-inch alloys while you also have the option of taking 20-inch wheels when you buy the car. A big novelty factor are the flush door handles, and it is quite artistic how beautifully they come out for you to open the doors. Then of course is the Maybach logo and lettering all over the car that adds its own charm. The rear pretty much reminds you of the S-class with the split LED tail lamps standing out. This car is really long, in fact it is a whole 180 mm longer than the long wheelbase S-class which means it is nearly 5 and a half meters long. There are 10 dual tone and 5 single tope options to choose from and the one you see here is the design diamond white bright with obsidian black roof. 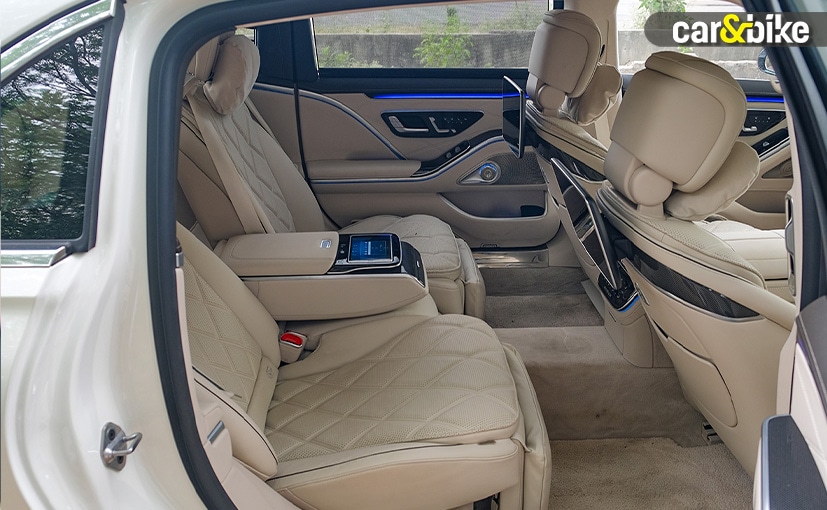 As expected, the cabin on the Mercedes-Maybach is luxury personified, more so on the second row. Now this one is probably the easiest sedan to get into and Mercedes has made a lot of effort to ensure that you don’t have to make a lot of effort to get inside this car. So, you get comfort rear doors that recognise hand gestures. A simple wave of your arm will close the door while you can stop the door from closing by just stretching your arm out. Neat indeed. You can also open or close the door at a press of a button next to the grab handle and control the movement using the touch screens on the first or 2nd row. 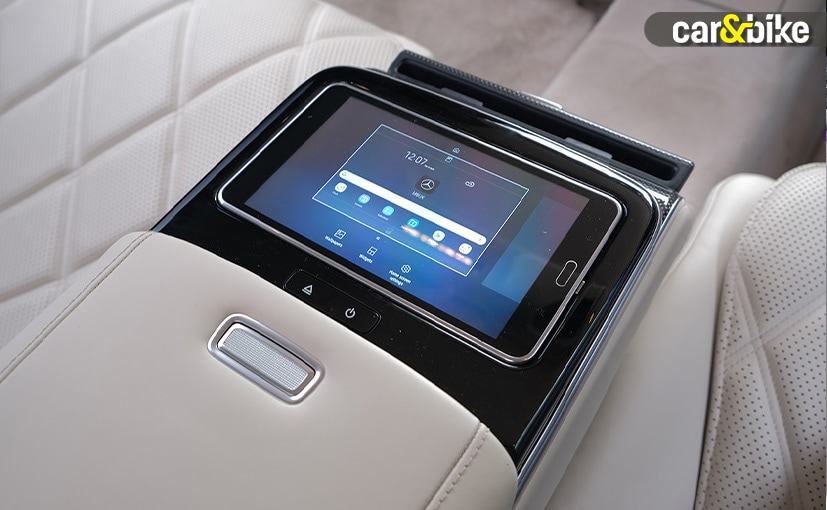 The center armrest comes with a tablet through which you can control a lot of functions.

What you get on the 2nd row are executive seats which get neck/shoulder heating and can recline by almost 45 degrees. There’s also the seat belt extender recognizes the occupant’s intention to reach for the belt by hand movements. On the Maybach S-class this second row turns into a lounge at a press of a button and then the occupant gets ample amount of leg space, great under thigh support, calf support and footboard as well. The center armrest comes with a tablet through which you can control a lot of functions both on the front row as well as the second row. So, infotainment options, massage functions, seat adjustment is all under your control. It’s another matter that in the lounge position there’s no way you can reach the big 11.6-inch touchscreen placed behind the front row seats, so it is more feasible for to use the tablet. 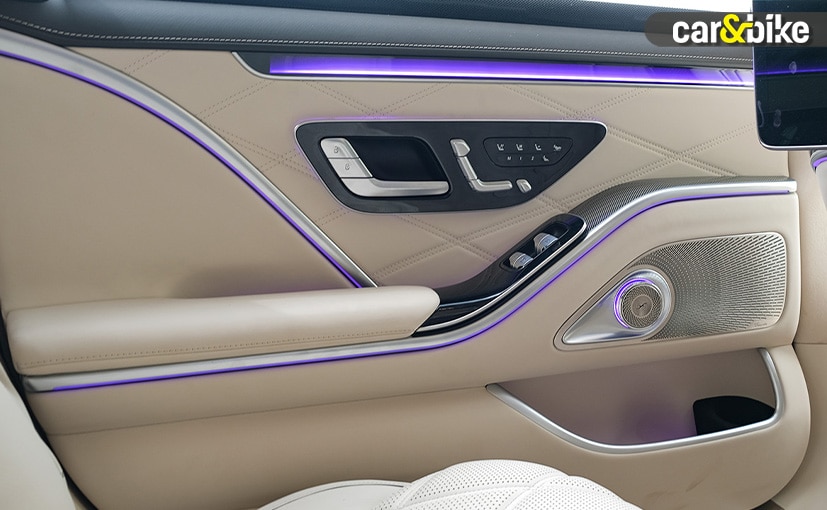 On the Maybach S-class this second row turns into a lounge at a press of a button.

The Mercedes-Maybach S-Class is the first car from the brand to feature Adaptive Rear Lighting in India which lets user completely control ambient lighting. Now unlike the Maybach GLS what’s missing here is a refrigerator, but you do get folding tables and a first-class rear compartment as options but only on the S 680. It will not be wrong to call this car a spa on wheels purely looking at the number of massage options it comes with. So right from head to toe almost all body parts are covered. So, no matter how tiring day you’ve had, once you step inside this car there’s no way you’re going to feel tired after spending some time here. This will just rejuvenate you in a really nice way. Of course, the rear seat is the place to be inside this car, but it doesn’t really harm in checking out the front row. 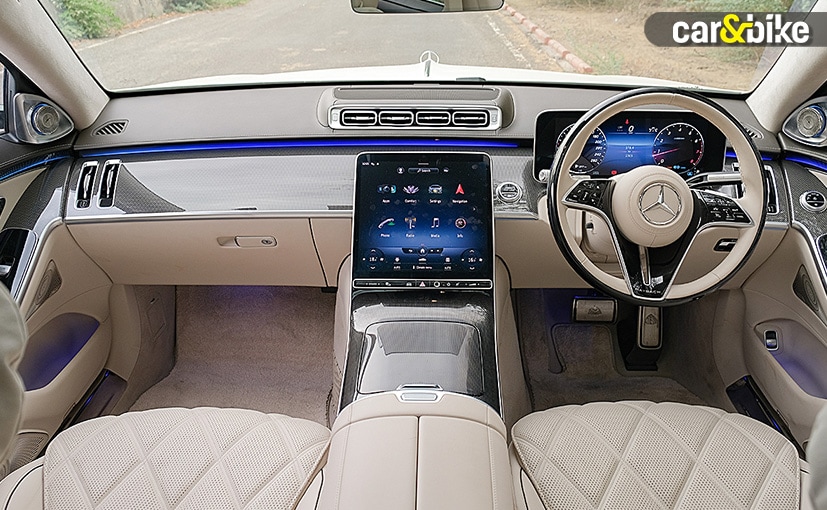 the huge 12.8 touch screen system on front row will put any high-end tablet to shame.

The exclusive Maybach Nappa leather is good and the seats on the front row bolster you well when the car is on the move. Then there’s the huge 12.8-inch touch screen system this will put any high-end tablet to shame, its fast and clear and even in bright sunlight easy to read. Almost all the features can be accessed through this screen and there are hardly any physical buttons here. There’s also the 12.3-inch digital instrument console which again is very easy to read and understand. You also get capacitive touch buttons on the steering wheel which gets the premium wood finish. The patterns on the dash give you a sportier feel, so you get a combination of luxurious and sporty feeling here. Just like the 2nd row there’s also a wireless charger on the front but accessing it is a bit cumbersome. Yes the owner of this car will not spend too much time in this part of the car something like the Maybach S class needs to be perfect in every way. 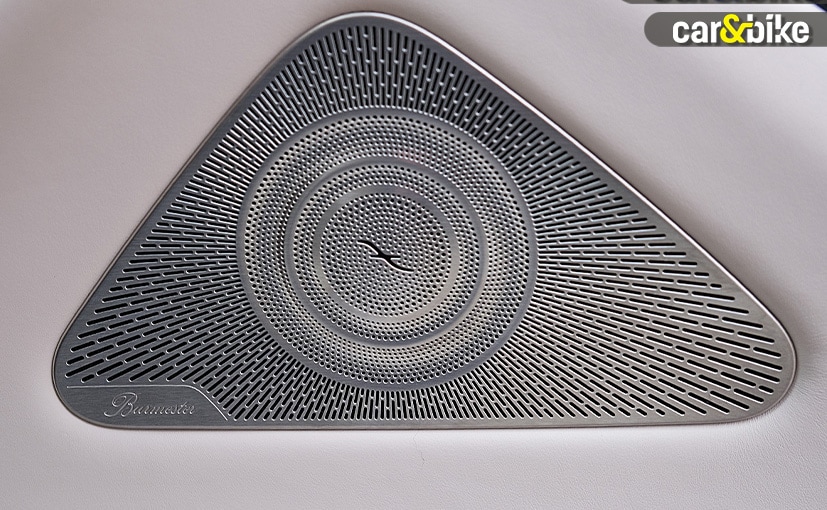 The 1750-watt Burmester sound system with 30 high-end speakers is a highlight in the cabin.

The latest generation of the Mercedes MBUX infotainment system does its duty on this car. And the ‘Hey Mercedes’ voice command system can even be controlled from rear seats. Then there’s the MBUX Interior Assist which recognizes eye direction and hand gestures of the occupants, to assist with some functions while the car is also able to recognise movements and gestures by the rear occupants with the help of 3D laser cameras in the roof liner. For example, it reads the height of passengers in the rear and makes the car adjust headrests. Another highlight is the 1750-watt Burmester sound system with 30 high-end speakers. The exciters in the seat also add their own feel. This is even better than the Maybach GLS. 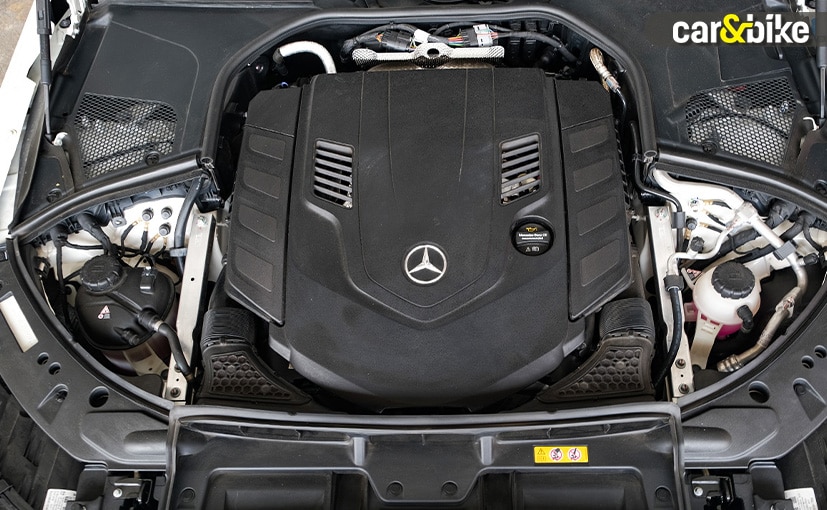 Powering this S 580 is a 4.0 liter V8 petrol engine which gives you a maximum power of around 496 bhp and a peak torque figure of 700 Nm. A 48-volt mild hybrid system also does its duty on the car so there’s always enough power to play with. The engine works beautifully with a 9-speed Automatic transmission and there’s no lag here for you to experience. And if we talk about the more powerful S 680 well there you get a 6.0 liter V12 engine which makes a mad 603 bhp and 900 Nm. Both these cars can do 0-100 kmph in under 5 secs. Power is sent to all four wheels via AWD system, and you also get paddle shifts for added driving pleasure. Top speed is limited to 250 kmph. 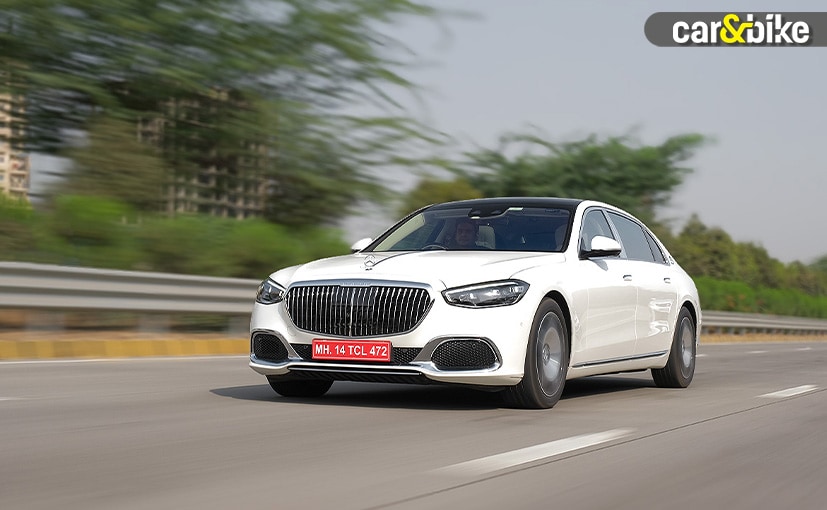 Power is sent to all four wheels via AWD system and top speed is limited to 250 kmph.

We’ve spoken of insulation levels in luxury cars, but I don’t think any car beats the Maybach S class in that respect. This is a quiet cabin in this car. It comes with active road noise tech, something like noise cancellation in headphones so all the efforts have been made to ensure that no sound from outside comes into the cabin and it remains an exclusive and silent place for you. Initially when you put the ignition on it is so silent that it gives you the feel of an electric vehicle. The car also comes with something called engine order cancellation (EOC) where the rpm of the engine is used as an input variable to generate counterwaves from the sound system. The Airmatic air suspension does a brilliant job on the car.

Just like the Maybach GLS, even here you an exclusive drive mode called the Maybach which ensures a softer ride. The car literally glides over all sorts of surfaces, and you do not get affected inside the cabin at all. Now for some of you this could be a little too soft for comfort, in that case switch to the comfort mode and get the desired ride quality. Of course, the Sport mode is there too if you want to use the drivetrain to its full potential. The Airmatic air suspension does a brilliant job on the car to say the least. However, the sensor system seen on the Maybach GLS that recognises the road ahead and adjusts the dampers accordingly is missing on this car. But Car-to-X technology that comes with the Mercedes Me connectivity suite does help in reading the conditions that lie ahead. 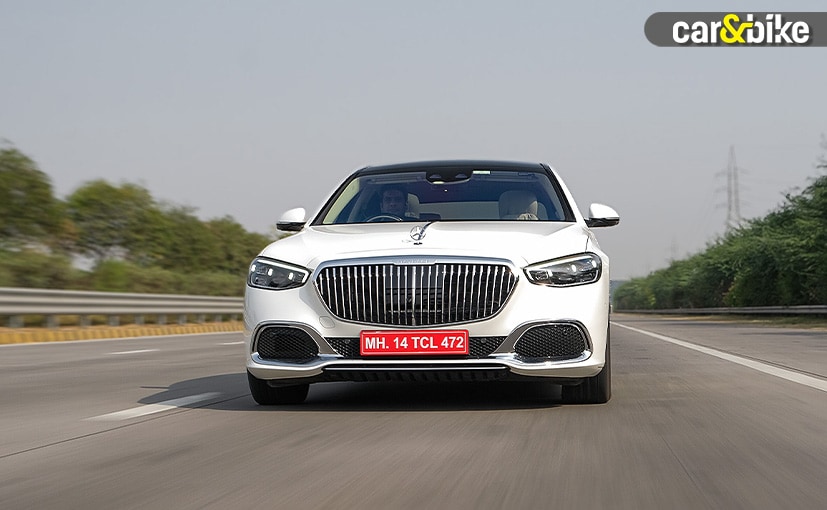 Car-to-X tech in the Mercedes Me connectivity suite helps in reading the conditions that lie ahead.

This S 580 also misses out on a rear-axle steering which would’ve come in handy looking at the length of the car. Available in the S 680 as an option it reduces the turning radius of the car by up to two metres. Then there’s the ground clearance which is a bit of a concern on this car. So, you got to be careful specially when you’re crossing speed breakers or uneven patches of road. The good thing is that the car gets a feature called raise vehicle level which you can access by pressing a button on the touch screen. So just before you’re hitting a speed breaker it’s a good idea to press this button increase the ride height a bit and then cross the breaker for peace of mind. 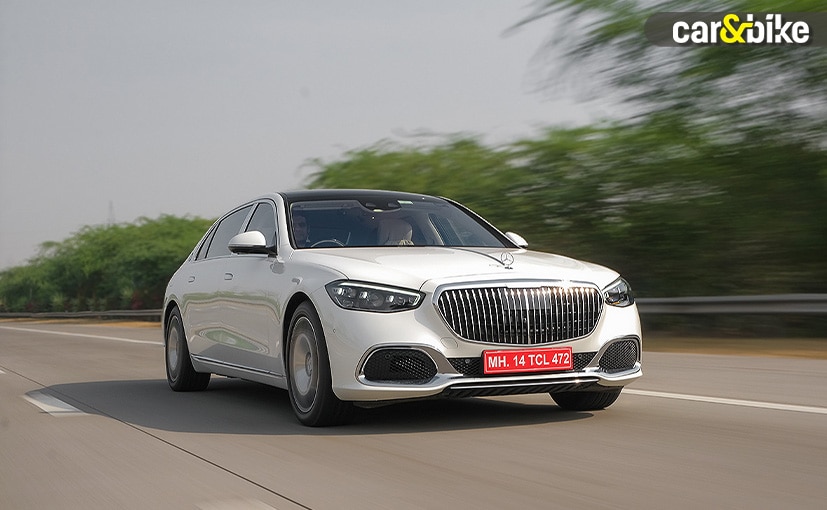 There are as many as 13 airbags inside this car including beltbags.

The Mercedes-Maybach S-class also gets Autonomous Driving Level 2 tech something that will of benefit in the chaotic Indian road conditions. Features like Evasive Steering Assist and Active Brake Assist with Cross-Traffic function find a place in this luxury car. And there are as many as 13 airbags inside this car, more than any other car sold in India. 2 of them are behind the front seats and there are 2 more bags inside the seat belts called beltbags. This is some innovation from Mercedes-Benz. 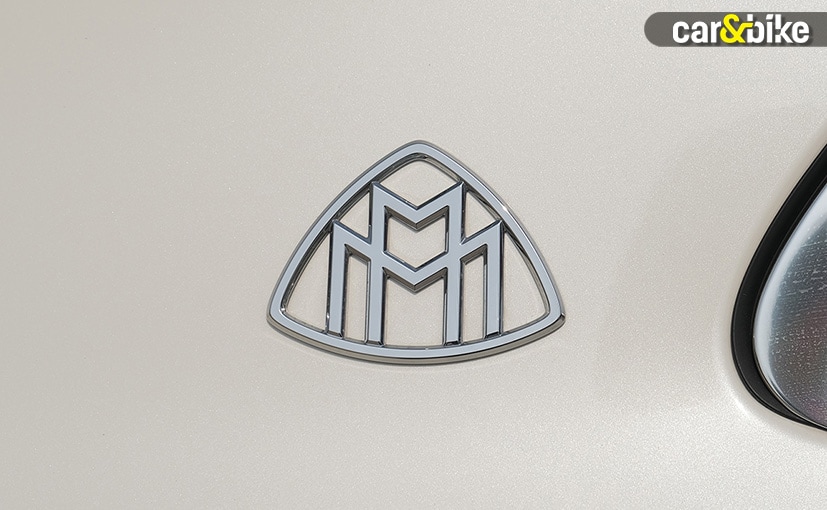 This car is well and truly be your ticket to absolute luxury.

To take on the likes of even more luxurious brand like Bentley and Rolls-Royce, the Maybach S-class is loaded with all the arsenal and looking at that a sticker price of Rs 2.50 crore (ex-showroom) for this S 580 may not sound very exorbitant. But remember it is still a full ₹ 1 crore more than the S-class. At ₹ 3.2 crore The S 680 will burn an even bigger hole in your pocket, provided you get it as the car is sold out till 2023. So, if you’re ready to sign that cheque and do get to lay your hands on this palace on wheels, this one will be well and truly be your ticket to absolute luxury.