In 1995, the BSE switched to an electronic trading system.

The Greek philosopher, Heraclitus once said, “Change is the only constant.”

While this is true for human beings, it’s also true for businesses. How a company responds to change and trends determines its ability to survive (or thrive). Without changing itself, it runs the risk of becoming irrelevant and obsolete.

However, if it chooses the path of transformation, it can continue to survive and even flourish.

Here are five companies that pivoted their business and thrived.

First on our list is the Bombay Stock Exchange.

What is now a fintech company used to at one point be a gathering of stockbrokers under a banyan tree. This later evolved to an office in a building in Mumbai in 1928.

For decades, stockbrokers would buy and sell physical shares in an open outcry trading floor.

Then in 1995, the Bombay Stock Exchange switched to an electronic trading system as digitisation took the world by storm.

The company made this transition in only 50 days. This automated, screen-based trading platform, called BSE On-Line Trading (BOLT), had a capacity of 8 million orders per day.

Today, BSE is the fastest stock exchange in the world with a speed of 6 microseconds.

The company uses a technology platform called Bolt Plus, which is based on the business architecture of global giant Deutsche Borse.

It has over 4,000 securities listed on its platform and has commodity derivatives contracts in gold and silver. It also has a platform for trading in equities of small-and-medium enterprises and runs India INX, the first international exchange of India.

BSE is a perfect example of how a company made the pivot and transformed its business to stay relevant.

In the December 2021 quarter, the company’s revenue increased by 60% YoY while net profit almost doubled. 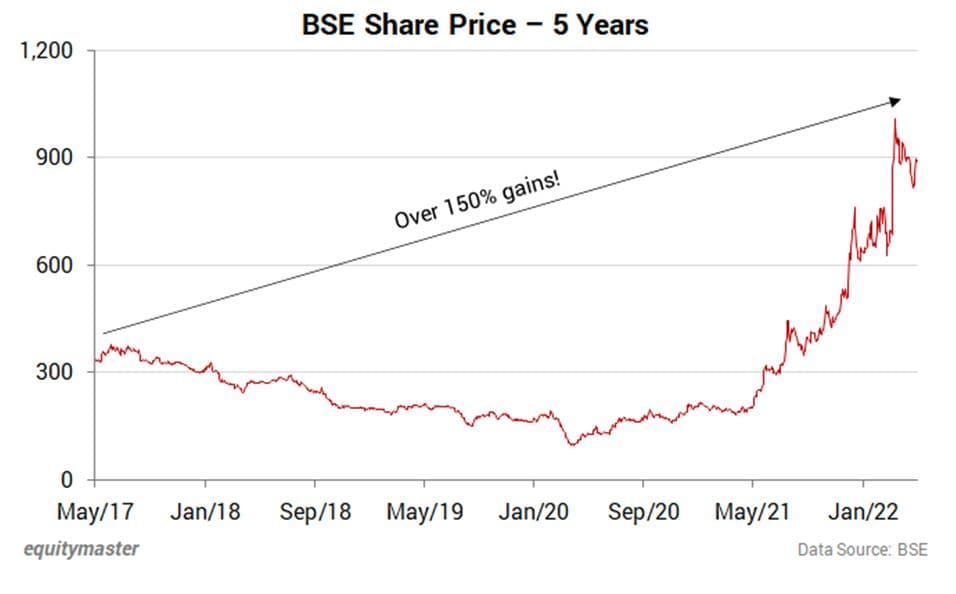 The company is a market leader in manufacturing extrusion machinery for plastics. It has over 60% market share in the segment.

KET is the sole supplier to many players in the plastics industry, such as Supreme Industries and Ashirvad. It has maintained its leadership with the help of strong in-house R&D and long-term technical tie ups with leading players across the globe.

However, in the financial year 2021, the company decided to venture into the electric vehicle (EV) segment via its battery division, Battrixx.

Led by various government initiatives/incentives, an increase in fuel prices & environmental concerns, demand and consumer awareness for electric mobility has gone up. The same is reflected in high demand for electric vehicles (EV).

The company believes this momentum of shift will continue to grow and is a huge opportunity.

In March 2022, Battrixx, announced it acquired a 100% stake in Pune-based Varos Technology, a pioneer in developing IoT tools for EV infrastructure and battery management systems.

With this, KET is set to strengthen its leadership position in newer technologies for electric vehicles and other energy storage applications.

For the December 2021 quarter, the company reported a 70% YoY growth in revenue and a 51% YoY increase in net profit.

It has also approved a proposal to raise up to Rs 300 crore for the expansion of Battrixx. With these funds, Battrixx will enhance its annual production capacity from 100,000 battery packs to 700,000 packs by the end of 2024. 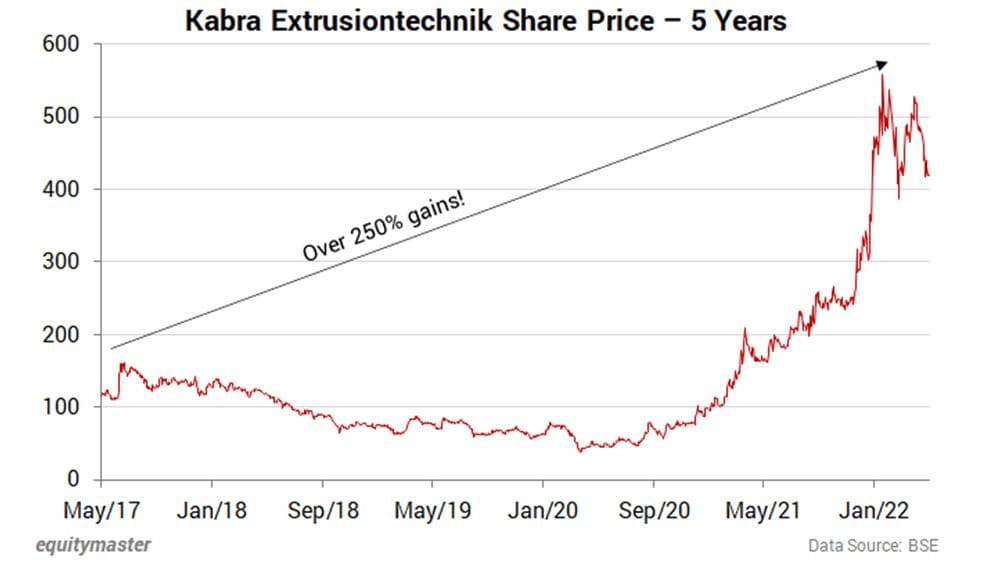 Third on the list is Arman Financial Services, a non-banking finance company.

The company is headquartered in Ahmedabad and provides loans to the unorganised sector residing in rural and semi-rural locales.

It also owns Namra, a microfinance company, that provides loans exclusively to women self-help groups for income-generating activities such as livestock, dairy, agri, and allied ventures, kirana stores, and other rural activities.

Prior to May 2013, Arman Financial was engaged in the business of two-wheeler financing and microfinance lending business through Joint Liability Group (JLG) model.

However, in 2013, the company decided to grow its microfinance business.

Following the RBI directive for creating a separate category of NBFC for lending to the micro finance sector, the company was the first in India to obtain a “NBFC-MFI” license for its wholly owned subsidiary – Namra Finance Ltd (Namra).

For the December 2021 quarter, Arman Financial reported a 22.4% YoY increase in revenue and a 140% YoY rise in net profit. 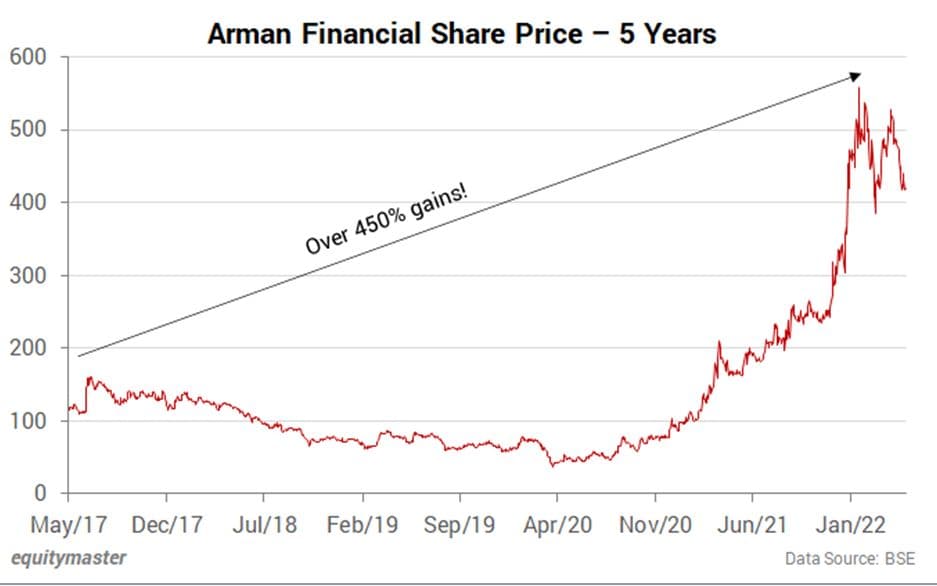 Last on our list is MoldTek Packaging, a market leader in the rigid plastic packaging space.

In the 1990s, the company pioneered the concept of plastic pails for the paints industry. It also introduced plastic containers for the lubricant industry with value added features such as ‘pull-up spout’ and tamper & leak free features.

Then in the 2010s, the company saw opportunity in the food packaging and FMCG industry. It pivoted its business and received orders from segment leaders such as Adani Wilmar, ConAgra, Cargill, Healthy Heart etc.

This resulted in robust growth for the company. It increased production capacities at existing plants and set up a new plant in Dubai to keep up with demand.

Post a successful entry and execution in food and FMCG packaging, the company is again shifting gears. It has recently announced entry into Pharma (domestic and OTC) packaging.

The management expects revenue from the pharma packaging to contribute from 2024. The immediate focus is on CRC Caps, where the market opportunity could be worth Rs 500 crore.

In the December 2021 quarter, MoldTek reported a 20% YoY increase in revenue while net profit rose by 11.4% YoY.

It also recently raised Rs 100 crore through QIP issue, at a price of Rs 740 per share.

Turning a business in a different direction could be a risk not many would be willing to take.

However, if done at the right time, with calculated foresight, it could pay off.

Change and transformation in an organization have many positives. They encourage innovation, help employees develop skills, and lead to better business opportunities.

They also drive growth, which in turn drives the stock price, and thus the value of the company is higher.

However, sometimes risks may not pay off.

Before investing in a company at the precipice of change, assessing the fundamentals and prospects of the business.

Sustained research must not be compromised despite the positive odds.

Disclaimer: This article is for information purposes only. It is not a stock recommendation and should not be treated as such.