There has been a furious struggle raging between bulls and bears.

Quantitative tightening, rising crude oil prices and inflation have dampened investor sentiment. In the absence of a significant event there has been a furious struggle raging between bulls and bears.

Amid this volatility, many stocks have hit their 52-week lows, irrespective of their fundamentals.

Shares of the company are trading at their 52-week lows after the it recently announced its Rs 12,900 crore capex plan.

The company plans to add 22.6 MT (million tons) of capacity to cater to future growth.

However, analysts believe that in times of weak demand and high fuel costs any significant announcement capacity is a negative.

Input costs have remained elevated for the past few months and cement companies haven’t been able to pass on the cost increase. Further capex could impact margins.

But UltraTech Cement has a strong balance sheet to ensure this planned expansion without stress. The net debt-to-equity ratio of the company stands at a low 0.2x.

Analysts also believe the company will be debt-free by the end of the financial year 2024. 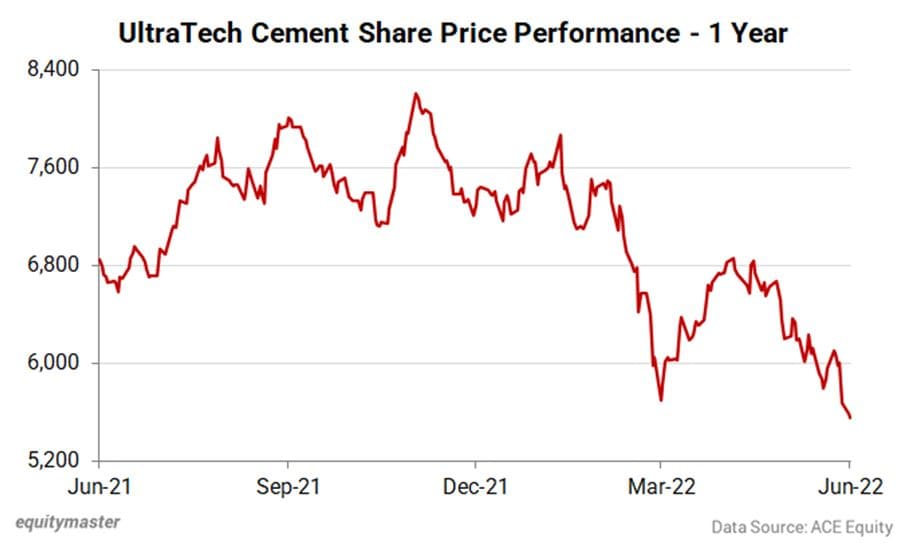 Shares of the company also hit their 52-week low as cement stocks came under pressure after UltraTech Cement announced its expansion plans.

UltraTech’s capex plans are likely to trigger a race towards maintaining or increasing capacity share. It is also expected to increase competition along with a possibility of price wars.

The Adani Group has indicated that it may seek to double the capacities of ACC and Ambuja over the next five years.

Shree Cement also has stated plans to double capacity. The company has set aside Rs 9000 crore for its expansion plans.

But does its balance sheet have what it takes to withstand the aggressive capital outflow?

Shree Cement’s debt-to-equity ratio stands at 0.1x. It also has healthy cash reserves which it plans to use to fund its capex. 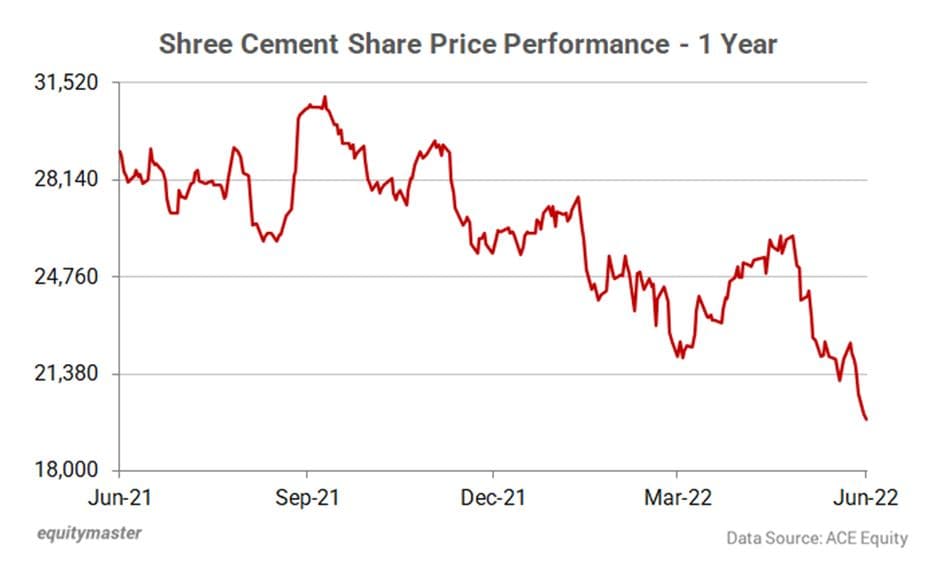 Third on the list is ICICI Lombard General Insurance.

The share price of the company hit a 52-week low on concerns of Covid-led claims.

The stock is also trading at its lowest level since May 2020 as it has consistently reported weak results for the last two years.

In the recent quarterly results, the company reported a 9.5% YoY drop in net profit at Rs 310 crore due to decline in Covid-19 cases.

That apart, underwriting losses of the insurer also widened in the quarter to Rs 310 crore from Rs 91 crore, a year ago.

However, weak results may just be a temporary phenomenon. The company is a natural beneficiary of pick-up in non-life insurance space given huge under penetration.

It is India’s second largest non-life insurance player and one of the largest within the private sector.

It also has 81% of its investments currently in debt, which means there is a scope for higher realised returns, with a turn in interest rate cycle. 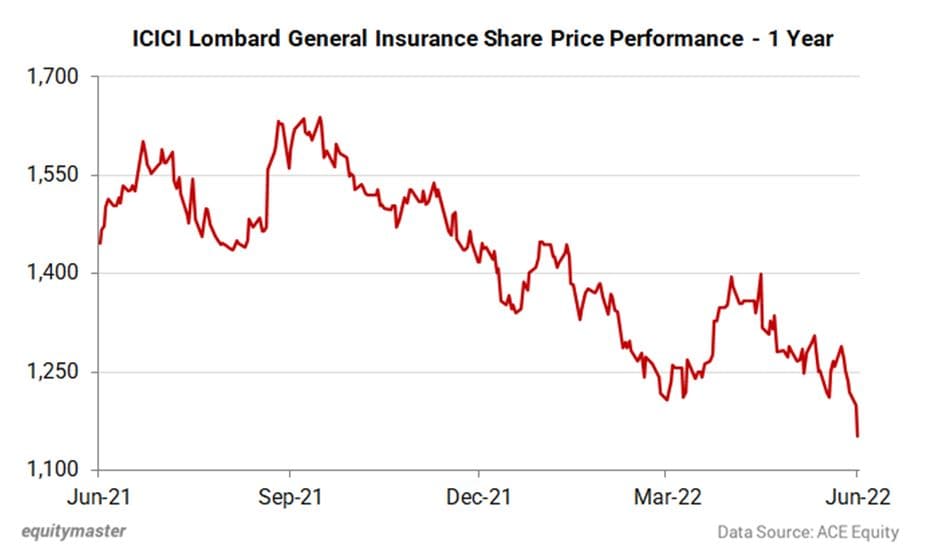 The company’s shares have been trading low as crude oil prices have soared in the last couple of months.

The price of crude oil recently topped $120 a barrel after Saudi Arabia raised the July official selling price (OSP) for its crude oil to Asia by $2.1 from June to a $6.5 premium, the highest since May.

This does not bode well for oil companies such as HPCL as it could further put a pressure on margins.

For the March 2022 quarter, HPCL reported a 40% YoY decline in net profit due to a decline in marketing margins. The company’s revenue increased only marginally.

While it earned $12.4 on turning every barrel of crude oil into as against $8.1 per barrel in the year ago period, these gains were wiped away by losses on petrol, diesel, and domestic LPG sales.

HPCL expects crude prices to remain elevated through the year. However, the company hasn’t faced any shortage of refined products and is able to meet requirements at its retail outlets using the refineries it does not operate or jointly owns.

It also has high financial flexibility supported by its parent, ONGC, that owns a 54.9% stake in the company.

Last on our list of stocks is Grasim Industries.

Grasim has been falling after it announced its plan to invest Rs 10,000 crore over the next three years for entering into the paints business.

For this massive capital expenditure, Grasim Industries is planning to raise up to Rs 2,000 crore through debentures.

Not only that, but Grasim Industries also happens to be the holding company of UltraTech Cement. As mentioned above, UltraTech Cement has also announced a new capital expenditure plan of Rs 12,900 crore to tide increased competition in the sector.

This could negatively impact the company’s financial health.

As indicated by the results of the financial year 2022, the company’s debt-to-equity ratio stands sizeable at 1x. He stood at 0.2x five years ago.

However, Grasim Industries is the flagship company of the Aditya Birla group. It ranks among India’s largest private sector companies.

It also has certain other businesses such as fertiliser, textile, etc.

Has the market got it wrong? Only time will tell. 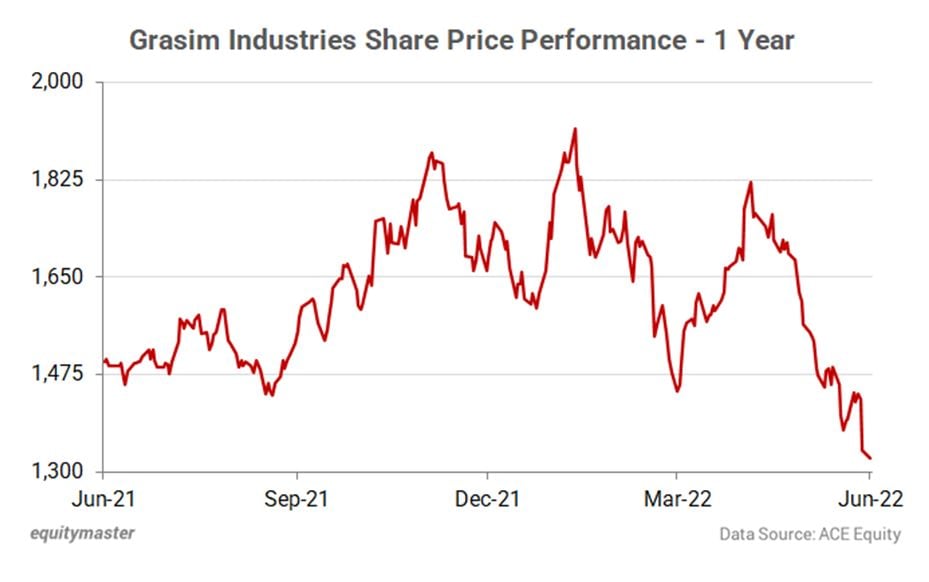 Should you buy stocks trading at their 52-week lows?

When it comes to stock selection, it’s important to have a margin of safety. However, at a time like this, when volatility is at its peak, it’s better not to catch a ‘falling knife’.

What does this mean? This means don’t buy stocks that are falling just as you wouldn’t catch a falling knife. Let the volatility settle until you decide to buy.

So, before you choose an investment ensuring that you dig deeper. Even the bluest of blue chips don’t offer much upside if just bought before a massive fall.

Investing in stocks anyway comes with inherent risks. Doing thorough research won’t eliminate them, but it will surely minimise them.

Disclaimer: This article is for information purposes only. It is not a stock recommendation and should not be treated as such.