Sean Patrick Maloney is a Democratic Party stalwart who declares himself a “practical, mainstream guy.”

Alexandria Ocasio-Cortez is a political outsider-turned-left-wing star with a powerful social media megaphone.

Perhaps no two House Democrats better represent the dueling factions of a party at war with itself — over matters of doctrine and institutions, how to amass power and, most of all, how to beat Republicans. Maloney, who represents a Hudson Valley-area district, is chair of the Democratic Congressional Campaign Committee, tasked with protecting incumbents and making him a pillar of the establishment. Ocasio-Cortez, who represents the Bronx and Queens, has made it her mission to push that establishment to the left, one endorsement of a liberal challenger at a time.

The two forces collided this week when Ocasio-Cortez handed her endorsement to Maloney’s primary opponent, Alessandra Biaggi, a left-leaning state senator with a political pedigree. It is often frowned upon for incumbents of the same party to back primary challengers, and it is especially unusual within a state’s delegation. But Ocasio-Cortez, who toppled a Democratic incumbent herself in 2018, has never been one to abide by such rules, and her muscle and fundraising savvy could be a major factor in the race.

The move turned a contest already filled with powerful New Yorkers and divided loyalties into a messy national Democratic proxy battle. There are clear tensions on issues that have divided the moderate and left wings of the party, including public safety, Medicare for All and fundraising tactics. Driving those disputes are more existential questions, like how to pursue survival in a climate that appears catastrophic for the party in power.

“It’s a fight between two Democrats: one is younger and dynamic and wants to make changes quickly,” said former Governor David Paterson, for whom Maloney once worked and who has remained neutral in the race. By contrast, he said, Maloney “is now emerging in the leadership of the House and is thinking more about the entire party and how things will go in November this year.” 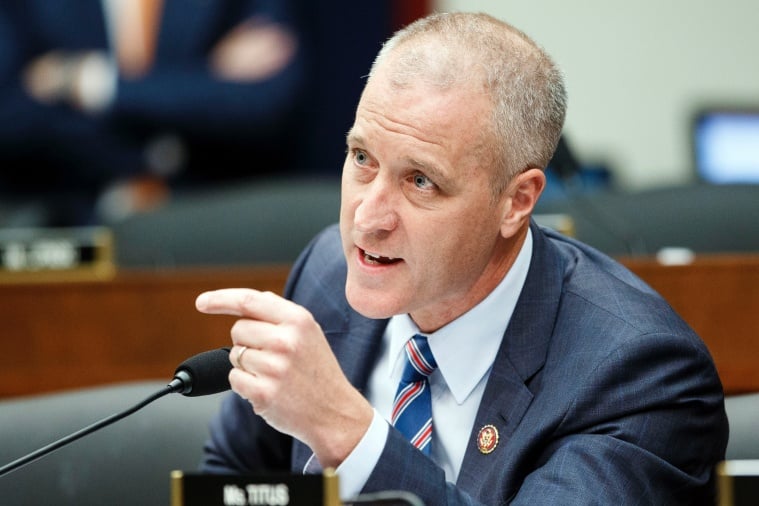 The fight will play out in New York’s 17th District, which under new boundaries includes parts of wealthy Westchester County, outside New York City, and conservative Hudson Valley hamlets. The district was recently redrawn as part of a redistricting fight that left some Democrats seeingthing at Maloney. It also left the 17th District more competitive — raising the stakes for a primary fight that may turn on which candidate voters think can hold the seat. Mike Lawler, a state assemblyman, is expected to be the Republican front-runner in the primary Aug 23.

“We have an incredible opportunity to be able to win against Republicans in November by being bold on our positions for working people,” Biaggi said in an interview.

But that may not happen with an Ocasio-Cortez endorsement, warning Suzanne Berger, chair of the Westchester County Committee, who is backing Maloney.

“They misjudged the voters of New York-17 if they think that is helpful to winning in November, which is the main point,” she said. “Republicans will use that endorsement as a weapon in November.”

Ocasio-Cortez declined an interview request. Her spokesperson, Lauren Hitt, said that the district would be competitive regardless and that “with Roe and gun safety on voters’ minds, Sen. Biaggi’s record makes her uniquely positioned to drive out enthusiastic voters in the midterms.”

Biaggi and Ocasio-Cortez have been political allies since they both rose to prominence by defeating incumbents in 2018. Biaggi, 36, is the granddaughter of Mario Biaggi, who was a 10-term congressman from New York. Hillary Clinton, whose Chappaqua home is now in the district, helped lead Biaggi’s wedding ceremony.

Maloney, 55, has his own Clinton connections. He worked in former President Bill Clinton’s White House as a staff secretary, and he recently marched with Hillary Clinton in a Memorial Day parade in Chappaqua, according to a photo he posted on Twitter. Spokespeople for the Clintons had no comment on their plans to endorse in the race.

Maloney, who calls himself a “pragmatic progressive who gets things done,” is regarded as the favorite in the race, though local party officials say both candidates have worked to do in introducing themselves across a newly configured district. Biaggi, for her part, argued that Maloney had been too timid on issues like health care; she supports Medicare for All and said that “ideally, private insurance would not be part of that.” She casts Maloney as too close to corporate interests.

And at a moment of overlapping national accidents and frequent stalemate on Capitol Hill, where Democrats hold narrow majorities, she suggested that voters were in the mood for candidates who would “fight like hell for them.”

When Maloney first arrived in Congress after flipping a Republican seat in 2012, he was unquestionably more of a centrist. But his allies now dismiss the idea that the Congressman — New York’s first openly gay member of Congress who has long fought for LGBTQ rights and supported climate proposals backed by Ocasio-Cortez — is a moderate.

In an interview, he said he believed “in mainstream policies that can get done right now, on things like protecting our kids from gun violence, protecting reproductive freedom and climate change.” (The Senate has stymied most of those priorities.)

He noted several times that he had “nothing but respect” or “tremendous respect” for Ocasio-Cortez, despite her endorsement of Biaggi. 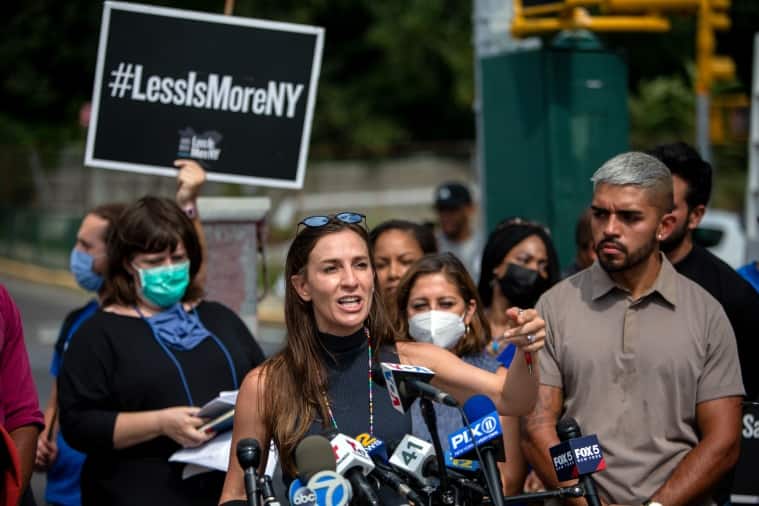 “I’m an original co-sponsor of the Green New Deal, and we have spoken about that. I speak to her all the time,” he said.

But as of Thursday, he confirmed, they had not spoken since she raised the prospect last month that he should step aside as DCCC chair, amid a battle over redistricting that threatened to tear the delegation apart. According to people in and around the delegation, who were granted anonymity to discuss private conversations, there have not been efforts to mediate between the two representatives.

Hitt, Ocasio-Cortez’s spokesperson, said that they were “collegial despite their differences.”

After the state’s high court struck down a congressional map drawn by Democrats and a new map was announced, Maloney declared that he would be running not in the redrawn version of his current 18th Congressional District but in the slightly safer 17th District. He lives there — and Biaggi does not, although she is planning to move to it — but the area is largely represented by Rep Mondaire Jones.

The leader of the campaign committee entertaining a challenge to a fellow incumbent explosive backlash, and Ocasio-Cortez, citing a conflict of interest, suggested that Maloney should step down as chair should he pursue such a challenge. Ultimately, Jones decided to run in a different district, and a primary was averted, but some members still privately bristle at the episode.

Asked about his message to disgruntled colleagues, Maloney acknowledged that he “could have done things better,” even as he stressed that the district he selected was only marginally safer for Democrats than the alternative.

“I also thought there was a way for it to work out and avoid a primary between members, and that’s just what we did,” he said.

He also promised that, as chair of the committee, his “heart” and his “focus” would be on protecting the Democratic majority even as he navigated his own race.

At the same time, Maloney noted that he ended a policy that blacklisted consultants or political groups that backed candidates who ran against incumbents. The policy had been a point of contention between left-leaning members and the DCCC.

Ocasio-Cortez has backed several challengers this year — one lost, and one narrowly trails in a race that is headed to a recount — much to the annoyance of some Democrats. 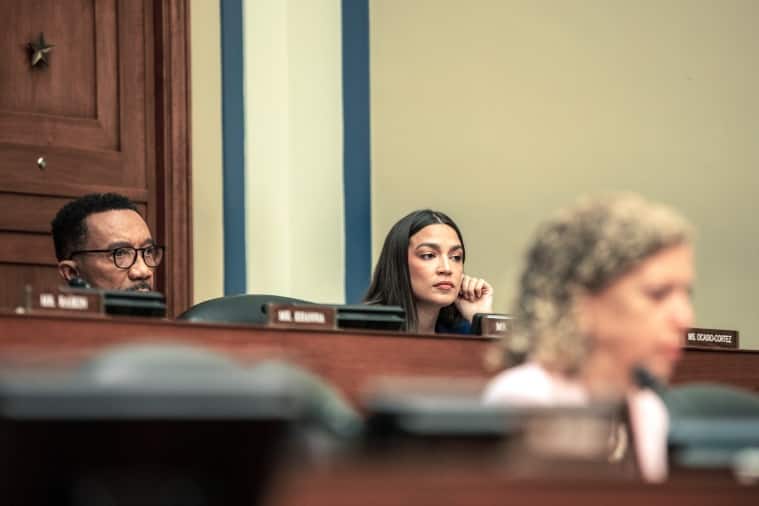 Alexandria Ocasio-Cortez listens during a hearing before the House Oversight Committee in Washington. (The New York Times file)

“New York’s post-redistricting fiasco is a clear demonstration of why a sitting member of Congress should not lead the political arm of the Democratic Party,” said Rep. Kathleen Rice, D-NY. But she also seemed to criticize Ocasio-Cortez, complaining about “certain members with their own long history of challenging incumbents” who are stirring the pot.

“When the stakes are this high, Democrats should be coming together to keep the majority, rather than promoting Dem-on-Dem violence,” she said.

Asked about criticism that Ocasio-Cortez is overly eager to take on her colleagues, Hitt said that the congresswoman believed that no one was entitled to reelection “by default.”

Some nationally prominent House Democrats have rallied around Maloney, who is close to House Speaker Nancy Pelosi. The list includes the chair of the Congressional Black Caucus, Rep Joyce Beatty, D-Ohio, who said in an interview Thursday that she was supporting him.

Some of the criticism Maloney is getting, she noted, comes with the job.

“You’re never going to make everybody happy, and you’re judged on victory,” she said.

Rep Hakeem Jeffries of New York, chair of the House Democratic Caucus, called Maloney “a hardworking and well-respected member of Congress who has won multiple hotly contested elections” and expressed confidence that voters “will once again send him back to Washington.”

Asked if that was an endorsement, he said only that the comment spoke for itself. But it reflected an unmistakable sign of encouragement from party leadership.

The primary is scheduled for August. But for all the drama around the contest, some Democrats in the delegation and beyond are already consumed by bigger problems amid an ever-worsening political climate.