Cinema is a play of expressions and narrative writing, whereas architecture is a bold and long-lasting identity that speaks for itself through built structures. Both have a deep connection that is both superficial and profound. Architecture adds the authenticity and believability that the director requires to make his film as true to the story and setting as possible. The emergence of the “Art director” as an indispensable part of filmmaking is the most powerful evidence of this.

Both architecture and cinema are distinct art forms realised through the collaborative efforts of a team of specialists and assistants. Still, both art forms intersect to produce a magical journey into the world of cinema. Architecture for a film is akin to teleportation. No one will be able to understand the look and feel that the writer wants to express if there are no visuals or scenes to resemble or elaborate the storyline. What matters is the designers’ ability to create a believable setting in which to weave the story.

Whether it’s the awe-inspiring Hogwarts castle in the Harry Potter films or the futuristic Los Angeles of Bladerunner, none would be possible without the convergence of both art forms.

We lose ourselves in a make-believe, different world while watching a film; even the most realistic film is ‘created’ to feel that way. In a film crew, this is the job of a production designer. A production designer must provide appropriate visual context for characters and a story while collaborating with the filmmaker and director of photography. The production design in Hindi cinema has become more appropriate and less theatrical in recent years. The larger-than-life canvas is used in some cases, such as Dharma Productions‘ lavish epic drama Kalank. Production design, or the look of the film in an oversimplification, has also matured as stories grow in terms of range and depth, with the goal of standardization with international cinema. The world of Hindi cinema is opulent, extravagant, and dream-like. We’ve all been captivated, mesmerised, and inspired by the massive palace-like sets or ostentatious villas in which actors live their screen lives. As a result, we decided to look at some of the most beautiful and expensive sets ever created in Bollywood. Prepare to be stunned by the stories behind the construction of these massive structures.

Sanjay Leela Bhansali is an aesthete and an artist, as evidenced by his films Black, Hum Dil De Chuke Sanam, and his 2018 release, Padmaavat. Many people were smitten by the film’s grand sets, gorgeous colours, and luxurious accessories. Surprisingly, the film was supposed to be shot at Chittor Fort in Rajasthan, but due to protesters and vandalism, Sanjay Leela Bhansali was forced to recreate the fort in Mumbai, raising the cost of the production. For the fort, the designers drew inspiration from old Rajasthani miniature paintings. The crew decided to use muted colors for the interiors, and they also shot a lot of stills. Later, in the digital intermediate, these shots were color corrected to achieve the desired effect. The fort had a massive lighting setup, with 15 generators running at any given time. 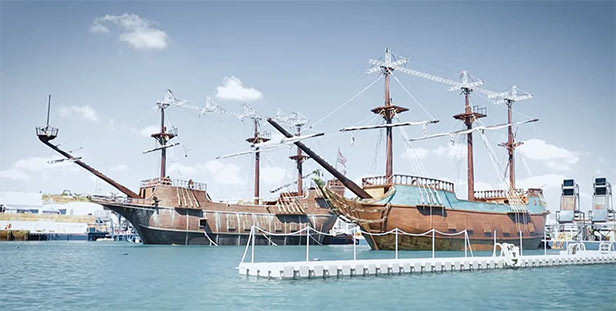 How often do we see fantasy Bollywood films that are on par with any Hollywood film? Thugs of Hindustan, directed by Yash Raj, came close with a stellar cast and massive sets. A team of designers worked for nearly three years before the film’s production to achieve the desired look and feel. The production company spent not only on high-quality VFX, but also on building two ships weighing more than 200 tons with the help of 1,000 people, including international designers and ship builders. In fact, the ships were said to be the most intricate part of the film.

Ali Abbas Zafar’s 200-crore box office hit starring Salman Khan and Katrina Kaif was among the biggest openers in the country’s history. Those who have seen the film know that it was nothing short of a spectacle. The filmmakers believed that going to the circus was a popular form of entertainment in India during the 1960s, and they wanted to recreate that ambiance. The set was 40 feet tall, and the creation of the Bharat circus included everything from prop painting to design blueprints, to the fire hoop through which Salman jumped, and much more. Director Ali Abbas Zafar discussed sourcing many artists from all over the world for the grand circus. Walkers, jugglers, fire throwers, acrobats, trapeze, hoop, rope artists, and many more were hired to make the circus look real. On the sets of Salman Khan and Katrina Kaif’s Bharat, 120 artists were seen on a daily basis. The sets for the film are said to have cost no less than 15 crores.

Those who enjoy period pieces may have seen this Ashutosh Gowariker film multiple times, not only for the music or costumes but also for the sets. Nitin Desai, the set designer, took numerous photographs of Agra and Jaipur, which were used as reference points. He then painstakingly created an exact replica of the interiors of Amer Fort in Karjat. He also built inch-by-inch replicas of Agra Fort, Deewan-i-Aam, Deewan-i-Khas, Jodha Mahal, and fully landscaped Mughal Gardens. The set was 1,600 feet long, 600 feet wide, and 68 feet tall. The fort was as tall as a seven-story building and was made of concrete, fiber, asbestos sheets, scaffolding, and pipes.

Sanjay Leela Bhansali’s epic Bajirao Mastani was another visually stunning treat. The film was shot in Aaina Mahal, where the director/producer attempted to create sets inspired by Mughal-e-Azam aesthetics. The brief called for recreating Maratha grandeur. Building 23 massive sets took approximately 8-9 years of research. The most difficult challenge was to recreate Pune’s Shaniwar Wada, which no longer exists. This was recreated in Mumbai’s Film City using a few architectural elements. For the courtroom, 50-foot-tall pillars with water features on both sides were built to showcase the durbar. This space featured 20,000 intricately designed mirrors as well as 13 chandeliers. The set took the team over a month to build. 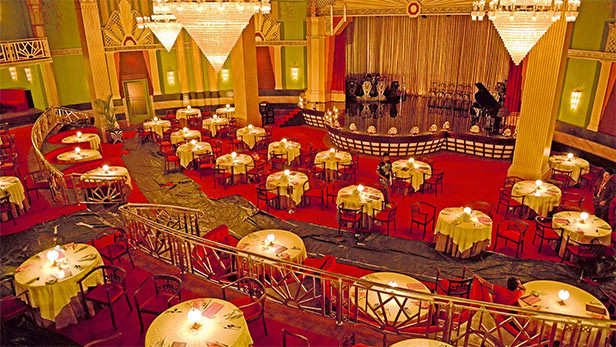 This Anurag Kashyap film grossed Rs. 43 crore at the box office and received widespread critical acclaim. Because the drama is set in the 1950s, the entire city of Mumbai had to be recreated. To recreate Mumbai, the set designer drew inspiration from existing buildings, photography, and pictorial references from archives, films, museums, libraries, and books on art deco architecture. The sets were made in Sri Lanka to save money. Every detail, from buildings to homes, signage to decor, was considered. An important catch is Bombay’s credibility in the 1950s. Few cities in the subcontinent could match the dynamism that was unfolding in Bombay at the time. The Art Deco style, which Bombay Velvet capitalises on in almost every frame, was a driving force behind the city’s “new modernism.” Art Deco, while most enthusiastically expressed in the realm of architecture, was not limited to or defined by it. The set construction cost a whopping 16 crore.

Without a doubt, architecture plays a role in bringing out the artistic side of cinema, just as cinema does by walking along and influencing modern architecture, and there is no limit to the extent to which these art forms can reach and bring out from each other .