Between 1969 to 1982, a series of excavations in Inamgaon, a village in Pune District, allowed archaeologists to study the Jorwe culture, which came into existence in the middle of the second millennium BC and suddenly died out in the first millennium BC. These archaeologists, connected with Pune’s Deccan Collegeidentified different vessels, two kinds of burials, figurines and mother goddesses, tools made of chalcedony and more.

Mook Shodhak, a pseudonymous member from the archeological team, suggested that a boat motif inside a tomb from the site represented the possibility of inter-dimensional travel. When the Archeological Survey of India dismissed Mook Shodak’s theories, he published these papers clandestinely in the weeks following the declaration of the National Emergency in 1975. Filled with sketches, remarks and verse, “The Book of Missing Pages”, as it was called, is a logbook on a nomadic cult of moon-worshippers called the Argent Eaters, henges, an animal-shaped funerary casket, prehistoric natural forms and miscellaneous observations from Inamgaon.

Maybe he was, maybe he wasn’t, is Mumbai-based artist Sahej Rahal‘s response. All archaeology, to a reasonable extent, relies on speculation to fill in the gaps and create a comprehensible narrative. In that sense, Mook Shodhak is the spirit of speculation, the possibility to infuse history with fiction. “The Book of Missing Pages”, which Rahal made through a grant from the Sher-Gil Sundaram Arts Foundation, is part of his ongoing exhibition, Ancestors. On view at the Jehangir Nicholson Art Foundation (JNAF) in the Chhatrapati Shivaji Maharaj Vastu Sangrahalaya (CSMVS), Mumbai, Ancestors begins with drawings from the logbook, placed above a vitrine of tiny terracotta objects. It serves as a thread to understand Ancestors—the act of narrative building, about what’s included and what’s not.

The seriousness of the overarching theme is diffused by Rahal’s treatment. Ancestorson view till May 8, is laid out like a post-human crypt, and includes terracotta objects (repurposed from Rahal’s installation, Harbinger, at Kochi-Muziris Biennale 2014) and urns, a golden skeleton, creatures that seem to be fashioned from fossil fuels, heads of different fictional taxonomies, and an interactive AI programme. Known to be influenced by mythology, science fiction, folklore and video games, Rahal, 33, says, “I wanted to fire people’s sense of wonder.”

Although Ancestors dismisses the concept of a centrepiece, it is bookended by the golden skeleton and the AI ​​programme. The skeleton, with its molten skull, is placed in what resembles a dig site. Tall urns surround it, creating a sense of a sanctum sanctorum. The skeleton’s ancientness is contrasted with the AI ​​programme, which serves like a portal into a future world. Sentient creatures walk in a jungle, perhaps in the aftermath of an apocalypse. When someone makes a sound, like clapping or laughing or playing the didgeridoo (such as the one stationed in the exhibition), the creatures release jelly-like blobs. It’s a two-way conversation. Think Arrival (2016), where aliens communicate with humans, in language systems that we are not used to. Objects here are made from clay, the oldest art material in the world, and polyurethane, a plastic material.

The past and the future have collided in this unusual contemporary exhibition. Rahal says, “I don’t think this is a ‘contemporary’ art show in some senses. The word ‘contemporary’ addresses the topical thing, the present. There is an amnesia to what lies beyond it and what has already come before it.”

This is like a playground for me. The exhibition is a game and I want people to come to their own conclusions

Nodding to history, Ancestors fits in the museum setting. At times, it feels as if one has walked into a museum diorama. Puja Vaish, 42, JNAF’s director and curator of this exhibition, compares it to an “ethnographic display” and says that many visitors have often viewed Ancestors as an extension of the museum’s collections. She says, “The exhibition is relevant to museums today because, like archaeology, they are structuring and presenting narratives, connecting objects, data, history but also political propaganda. How do we see our past? It’s a question of ethics.”

The CSMVS has an intriguing set of twin urns that formed a child burial in Inamgaon (it was common in the Late Jorwe phase to bury children in two urns that were placed mouth to mouth) as part of its collection. However, it doesn’t feature in Ancestors. Vaish says, “We wanted to mix fact with fiction, but it was difficult to have actual historical objects without labeling.”

Instead, Vaish and Rahal chose to go with a painted panel from the museum’s collection, depicting a fictionalized scene about early humans from two distinct stages of evolution engaged in battle. One wields stones and the other uses sharpened stone tools. It’s meant to illustrate the development of the human mind and the birth of civilisation.

Ancestors is about birth, death and rebirth. The building blocks of human civilisation—earth, fire, metal—are reiterated through the exhibition. There are the fired terracotta urns, drawings of birds and being infused with flames, Mook Shodak’s sketches which appear to be composed of tongues of fire, and even the fossil fuel creatures. As Rahal says, “All is fire.”

If fire can create, then fire can destroy, too. The truth is, we are living in the aftermath of someone else’s apocalypse. There may be no greater responsibility for humanity right now than to consider what we leave behind. Will we be remembered as perpetual social media scrollers, as visionary billionaires who fled Earth after burning, as just leaders who killed in the name of karma?

Vaish says, “The show’s title is about how we imagine our ancestors but also what we think about ourselves as ancestors.”

In the mid-1980s, German performance artist and sculptor Joseph Beuys conceived a large installation of 31 basalt rocks arranged like a pile of rubble or like the ruins of an ancient monument. He called it The End of the Twentieth Centurymeant to represent a bygone past, the possibilities of a new world, and, as rocks weather with time, a celebration of nature.

Art that focuses on apocalypses usually tends to be Ozymandian. But, while Ancestors may be informed by climate change, the pandemic, or the rise of majoritarian violence in India, the mood is not grim or guilt-ridden. 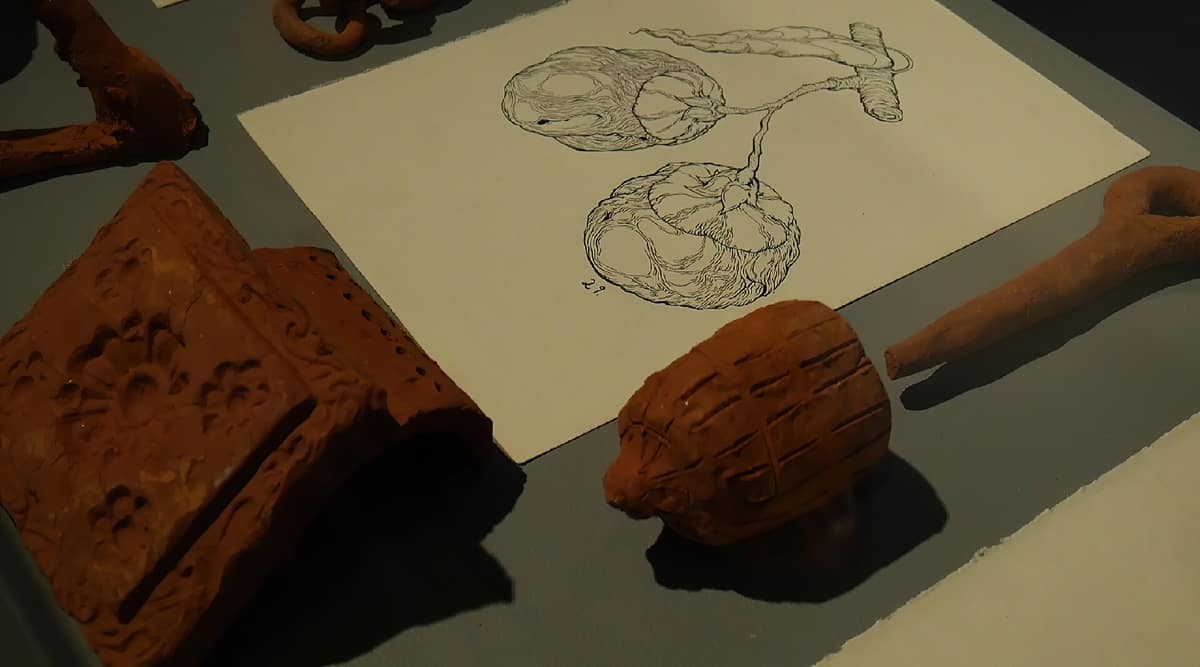 “This is like a playground for me. The exhibition is a game and I want people to come to their own conclusions,” Rahal says. It explains the lack of labeling across Ancestors, which may befuddle the adult visitor but sparks the curiosity of younger audiences. If Ancestors is a game, then visitors are asked to supply theories, much like Mook Shodhak. Young audiences have speculated in various label-making exercises conducted as part of Ancestors‘ outreach: The gas mask head is the skull of a person who died in the pandemic. The golden skeleton is the remains of a person who was punished to death by molten gold poured over them. The drawing of a man with a head of fire—that’s The Lord of Roots, who has four eyes to better absorb sunlight for growth. The world may be ending, but who says you can’t have fun?