At six of Delhi government’s seven upcoming semi-permanent hospitals that are at the center of a row between LG VK Saxena and the AAP government, construction work has started, with the outer steel framework completed in most, The Indian Express found during a spot check on Thursday and Friday. The only hospital where the ground hadn’t been broken is in Kirari.

While the BJP has accused the Delhi government of indulging in “corruption” in commissioning the projects, Saxena recently gave permission to the Anti- Corruption Branch (ACB) to probe allegations of “irregularities” against the Public Works Department (PWD). Deputy Chief Minister Manish Sisodia hit back, saying on Tuesday that the LG was trying to stop construction of the hospitals and inconvenience the people of Delhi.

On Wednesday, BJP MP Manoj Tiwari had visited the proposed 458-bed Kirari hospital site and alleged that there was a “barren plot” and “not a brick had been laid”.

When The Indian Express visited the spot on Thursday, it found a boundary of blue metal sheets around the earmarked area at present. The ground is yet to be prepared for setting up the foundation of the semi-permanent structures, with a section of the plot still being flooded. The land is surrounded on all sides with similarly flooded plots.

The raft foundation was unsuccessful, now a pile-formation will be used for laying the foundation,” he said.

An engineer associated with the company constructing the seven hospitals said, “The ground had been dug up and the water drained to set up the foundation. However, because there was so much water in the ground, the foundation would not have been stable. So, we need to do piling just like we do for the Metro — multiple columns 10 to 15 meters deep are constructed and then bound together to form one pillar of the foundation. The foundations that we made for the others are just about 3-4 meters deep.”

Another official confirmed this, and added that it was better to build the hospital at another location as it would increase the cost of the foundation substantially.

The BJP had also alleged that construction was to be completed in June 2020. However, the tender for the construction of the hospital was first floated in July 2021.

In addition to the hospital site in Kirari, The Indian Express over two days visited all hospital sites at the center of the controversy. Although at an advanced stage, all the hospitals have missed the ambitious six-month deadline set by the government, with the last of the hospitals targeted to be delivered by June this year.

A senior official from the health minister’s office said that the delays were because of the Covid-19 surge: “Still, we are trying to keep pace and complete the projects at the earliest.”

Construction is at the most advanced stages at the 336-bed hospital in Sarita Vihar, where not only has the framework been set up, but work on putting up the dry walls inside has also begun. Work on the yellow and brown facade, ventilation system, and wiring was also going on.

Construction work at the 596-bed set-up opposite the government’s paediatric hospital,

was also at a similar stage, but with less progress on the facade and HVAC system.

At the Shalimar Bagh site, the basic framework was almost complete, with some work on wiring also having started at the hospital situated right next to Max hospital in the area. Though at an advanced stage, the hospital has missed its target date of May 2022.

The semi-permanent hospitals are quick to make, with most reaching an advanced stage with six to eight months of construction starting. Once the foundation is laid, the hospital framework is constructed using ready-made steel columns that are attached together. There is no use of bricks or concrete in the main framework. Once the framework is completed, flooring using selected material needs to be laid and wiring and piping needs to be done. A glass facade completes the construction.

“These buildings are easier to set up — everything is pre-manufactured, we only need to assemble it here. It takes very little time as compared to concrete structures. If you see, the company building these hospitals is also constructing some of the new buildings for AIIMS, but those buildings have been under construction for years,” said an official from one of the sites, on condition of anonymity.

At Sultanpuri, the outer framework was almost complete but no work had started inside. The construction, as per personnel on site and those living around, started last October.

“Earlier, we used to have Dussehra celebrations here. Soon after the Dussehra mela last year, construction of the hospital began,” said a shop owner nearby. The hospital was supposed to be completed in May this year, according to targets set by the Delhi government in its economic survey. At Sultanpuri, the outer framework was almost complete but no work had started inside. The construction, as per personnel on site and those living around, started last October.

One of the engineers quoted above said that the pace of the work slowed down after Health Minister Satyendar Jain was taken into custody, and since then release of payments and various decisions were taking time. 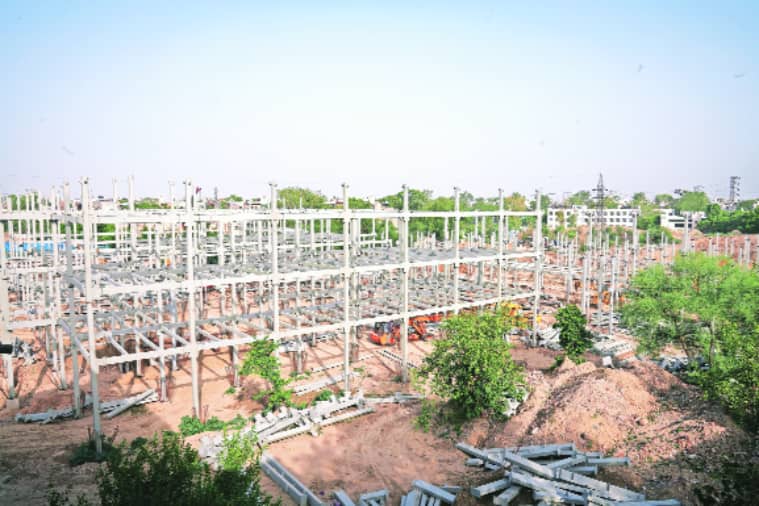 The outer framework was still under construction at the 1,577-bed facility at Raghubir Nagar in two ‘L’ shaped block set-ups. It is located right opposite Delhi government’s 100-bed Guru Gobind Singh hospital, which is currently being remodeled to increase the bed strength to 572.

The structure at GTB hospital has three sections, with one each meant for emergency, ward, and diagnostics. The block will add 1,912 beds to the hospital. However, the upcoming building is likely to accommodate all services of the hospital while the years-old main block is demolished and reconstructed, likely as a super-speciality centre. 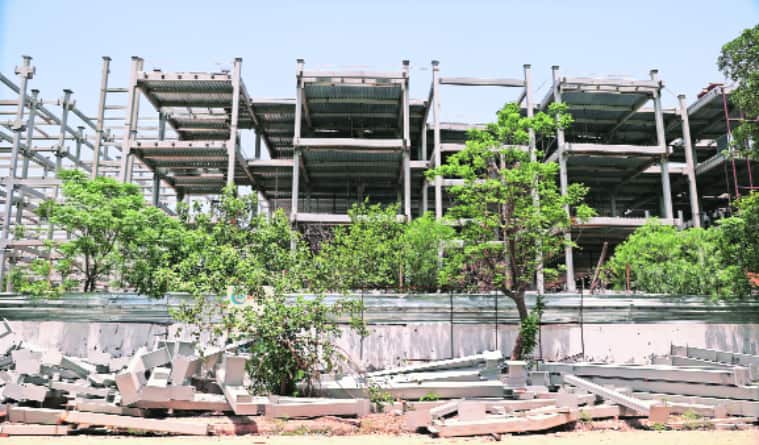 The structure at GTB hospital has three sections, with one each meant for emergency, ward, and diagnostics.

The seven hospitals are being constructed at a cost of over Rs 1,200 crore.