The modernists are always in demand and it is no different at the art fair this year. So, at numerous places booth are on display with the contemporaries and at other places they dominate the entire space. While Dhoomimal Art Gallery is showcasing FN Souza, Amrita Sher-Gil and Jamini Roy, among others, at the DAG booth 200 years of Indian art are being capsuled in an exhibition curated by Dr Giles Tillotson, Senior VP – Exhibitions and Publications at DAG.

On view, among others, are early Bengal oil paintings, early twentieth century works by the likes of MV Dhurandhar and Nandalal Bose, and works by MF Husain, SH Raza and Dhanraj Bhagat. Representing the late twentieth century are paintings by GR Santosh and Manu Parekh, and a recent large canvas by Madhvi Parekh, where the artist depicts folks a “Christian theme” in a naïve Indian art style.

If Art Heritage is showing KG Subramanyan, among others, Akar Prakar focuses on the Bengal masters with the likes of Nandalal Bose, Benode Behari Mukherjee, Ramkinkar Baij and Somnath Hore. Meanwhile, a tribute is being paid to Indian artists whom we lost in the last two years — Satish Gujral and Rini Dhumal in the ‘In Memoriam Section’, which has their works on display.

Though at most booths an array of artists is being showcased, some others are exhibiting an extensive body of work of a single artist. Primarily in the Focus and Platform sections of the fair, this includes Thota Vaikuntham’s Telangana men and women being presented by Emami Art and Sudip Roy’s gestural paintings showcased at Aakriti Art Gallery. Kolkata-based gallery Art Exposure makes its debut at IAF with a solo exhibition of Jogen Chowdhury, featuring 50 of his works. 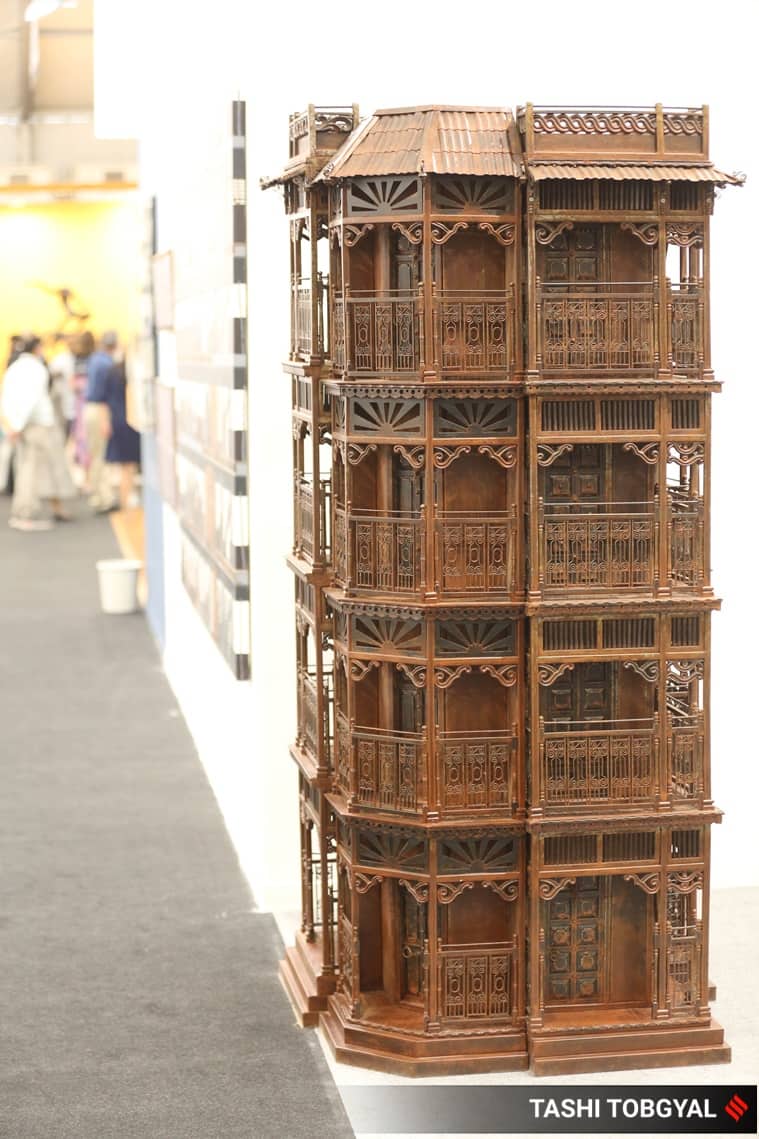 There is a room dedicated to MF Husain by Crayon Art Gallery. If Kalakriti Art Gallery has works of Hyderabad-based ceramist Vinod Daroz, Gallerie Nvya has works of his uncle and veteran ceramist PR Daroz.

It is not just what is being said that matters, but also how. The fair, every year, has some works that attract more attention than others for their scale, design or vivacity, and this time is no different. Contemporary artist Shilo Shiv Suleman returns with the installation ‘Rebirthing the River’, and Debanjay Roy also has Gandhi on his phone on a mattress in India Shining II (Gandhi and the Call Phone). Narayan Biswas has a multi-storey spectacle ‘Char Ghar Chaar Beetein’. 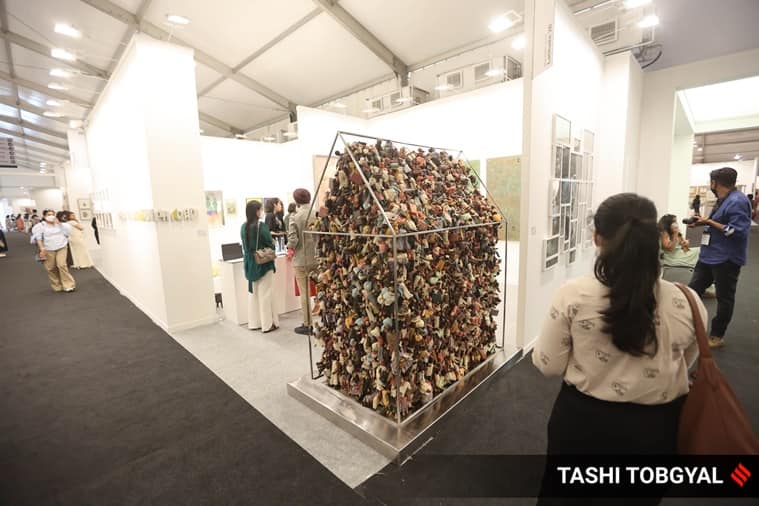 Gallery Art Positive has Ankon Mitra’s delicate works in origami and Karl Antao breathes life into wood in his installation at Gallery Espace. Khosrow Hassanzadeh unveils a series of portraits of Bollywood stars in his signature tilework style.

At the busy Museo Camera Booth, multiple projects come together, from an installation by Gopal Namjoshi to a wall that documents the life of expelled Nepal ruler Dev Shamsher Rana through images from the archives of Bhuvan Kumari Devi. In a new body of work, Bangladeshi artist Tayeba Begum Lipi contemplates life during the pandemic related lockdowns. Through metaphors, she also discusses the marginalization in society. Sudipta Das talks about displacement and migration with handmade doll-like figures crammed in a box-shaped installation. Baaraan Ijlal, on the other hand, archives narratives of loss and violence in ‘Mourners and Witnesses’.

Rajyashree Goody’s wall installation is a comment on food politics and right at the entrance is Mucharia Madhukar’s portrait of Babasaheb Ambedkar. 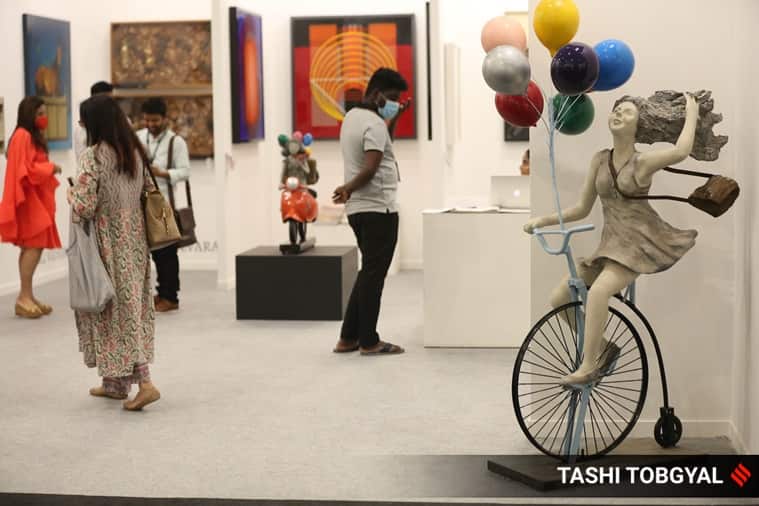 Through her fiberglass and resin works Tapasya Gupta pays tribute to her father, whom she lost to Covid. (Express photo by Tashi Tobgyal)

If the Pichvai Tradition & Beyond has works by artists from its atelier, Kolkata Center for Creativity has converted Benode Behari Mukherjee paintings into tactile artworks, and the same booth has a folk art effigy for people to pose with.

While Kanchan Chander shares her experience and state of mind during Covid in some of her latest artbooks, Jitish Kallat’s Epicycles is a double-sided photo series that began during the early days of the pandemic. Through her fiberglass and resin works that seem playful at first glance, Tapasya Gupta pays tribute to her father, whom she lost to Covid, and shares her childhood memories with him. 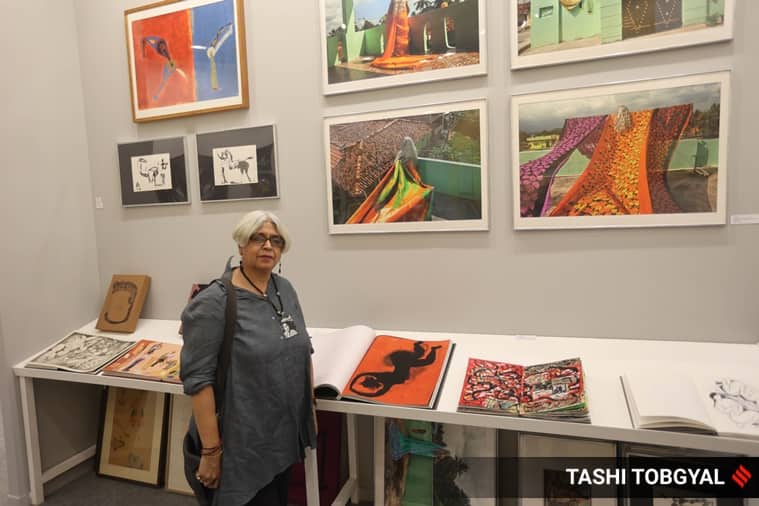 Kanchan Chander shares her experience and state of mind during Covid in some of her latest artbooks. (Express photo by Tashi Tobgyal)

While art engages viewers in multiple ways, at times it also seeks direct intervention and interaction. At the IAF, too, some art and assimilation is through play. At the Khoj booth, an interactive work focusses on air toxicity. In another game, one has to learn to survive as a woman from the agrarian community despite the various challenges.

Artist duo Jiten Thukral and Sumir Tagra also discuss the problems faced by farmers through an interactive work, ‘Weeping Farm’ that looks at their numerous problems, from stagnating productivity to unemployment, food in security, privatization, indebtedness and climate change. In another game titled ‘2030 Net Zero’, the duo explores the effect of greenhouse gases; The participants of the game need to bring it down to net zero.

Muzzumil Ruheel’s ‘Meeting Point’ being presented by Tarq, allows viewers to step into the landscape of the fair with his digital work.

At the KNMA and Art1st space there are Somnath Hore’s iconic works from the Wounds series and also a ‘Wall of Healing’ that invites viewers to share their state of mind by stamping on the any of the options: hopeful, anxious, healing, hurting. 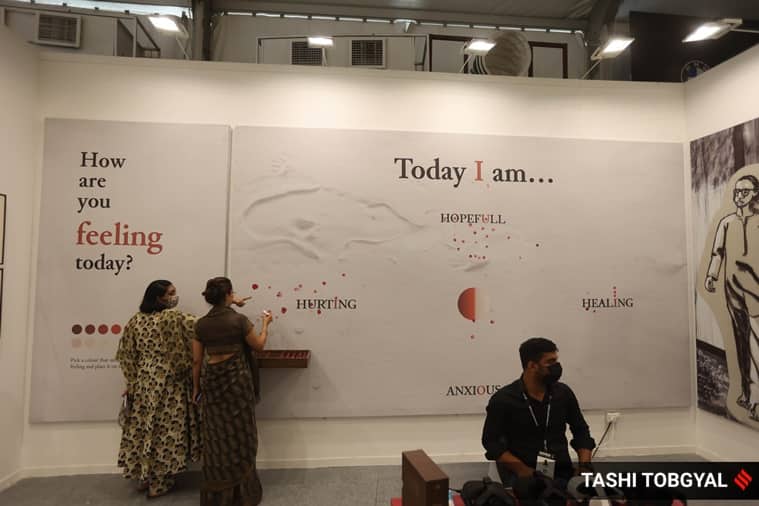 As always, the fair also has live performances that most often has the audience encircling the artist. This year, British-Gujarati artist Hetain Patel will present his first performance in Delhi. Titled ‘Reflex’, through choreographed movements, he will explore his inherited family history shaped by the Gujarati language and explore his diasporic experience (Saturday, April 30, 5.00 to 5.30 pm).

In another performance titled ‘360 Minutes of Requiem’, (Saturday, April 30, 3.00 to 6.00 pm), Arpita Akhanda will deconstruct a 360 feet barbed wire fence to reflect on “notions of nationalism, borders and partitions”, in an attempt to undo the historical and psychological barriers that have come to divide nations.

Artist Gurjeet Singh will return to childhood to enact the role of a boy playing a make-believe wedding with another boy in Ghar-Ghar (April 28, 5.00 – 6.00 pm). He will also conclude the fair on its final day, with another performance where he covers himself in mud, referencing the common origin and end in the earth. (May 1, 5.00 to 6.00 pm).