Social media is a double-edged sword and Akshay Kumar learned it the hard way (once again) when his recent outing invited the ire of his own legion of fans who criticized him for endorsing a pan masala brand despite his own statement against the consumption of alcohol and tobacco products. Well, one wrong move and the damage was done, to an extent that even Akshay’s apology could not undo it. Social media users were quick to question the actor on why he would donate the endorsement money to a cause and rather not terminate the contract like Amitabh Bachchan did in the recent past. Yes, Akshay is not the only one facing backlash for surrogate advertising.

Back in 2021, Big B landed in a similar social media soup when he became the face of a pan masala brand. The actor later clarified that he wasn’t aware it falls under surrogate advertising and also withdrew his association with the brand. It was not long ago when Kareena Kapoor Khan was trolled for a gold jewelry ad shot for Akshay Tritiya where she was not wearing a bindi. Alia Bhatt’s bridal wear ad sparked a debate on social media for challenging the age-old practice of kanyadaan. Rashmika Mandanna and Vicky Kaushal faced the music for their underwear brand ad that netizens found ‘cheap and objectification of men’. And so did Hrithik Roshan and Katrina Kaif when people found the food delivery service they endorsed to be imposing unhealthy working conditions for the delivery partners. Even King Khan, Shah Rukh Khan was not spared when he endorsed a fairness cream for men. The list can go on, but the point is should celebrities exercise more diligence while associating with brands? After all, they are huge influencers with massive fan following to say the least.

This week’s #BigStory explores different faces of celebrity endorsement with valuable insights from insiders. Read on.


Historically, the celebrity endorsement market has been growing at a tremendous pace. A large chunk of it now is also coming from social media platforms. Karan Taurani of Elara Capital, a global firm focused on emerging markets, sheds light on this. “The influencer marketing industry in India is about 1000 crore out of which one third is by celebrities. Social media celebrity endorsement on digital is somewhere close to 300 crore. If you look at the total market, the size could be 1200 crore in number. Overall ad spends in India are about 70000 crore, from that about 2 percent is coming from celebrity endorsers. So a lot of responsibility lies on a celebrity when they opt for an endorsement. A controversy like Akshay Kumar’s ad can have a negative impact on a brand, because when a celeb apologises or pulls back from an endorsement, it has huge negative repercussions. These are things that one should think through before signing an endorsement deal,” he cautions.

It’s more about the ethics


As is evident from the numbers, celebrity endorsement is one of the most popular tools of advertising in today’s times. Consumers buy into a ‘celebrity’, but unfortunately not all celebrity glitter may be gold. Some of the endorsements may be unethical when the authenticity of the endorsement, safety of the consumer and such other things become questionable. It is important for celebs to consider all aspects, especially how they are impacting the thoughts, and day-to-day choices of their fans and followers.

Taapsee Pannu, who has been an ambassador of multiple products and services has a rather clear approach while choosing her endorsements. “I endorse the products that I am a consumer of. So if there are products that I have consumed or I am consuming, I don’t mind telling the world that I have used it and I enjoy using it, and hence I am part of endorsing that product. The product or brand that I don’t identify with, I don’t use; I stay away from it even though sometimes it involves putting down a big paycheck.”

Ad-man Prahlad Kakar believes it is up to a star to take an ethical stand. “If artists are being trolled because there is a moral issue, then it is a problem. People are not very anti-alcohol because everybody seems to be drinking. In this case, they are being hypocritical – the society and the government. But when it comes to gutkha and tobacco, there is a huge lobby,” he says.


Surrogate advertising has become the buzzword in the world of celebrity endorsements, thanks to recent incidents of Amitabh Bachchan and Akshay Kumar. By definition, it is a form of advertising that promotes regulated products like tobacco, cigarettes, gutkha and alcohol in the disguise of another product like pan masala, club soda, mineral water and the likes.

Manisha Kapoor from Advertising Standards Council of India (ASCI) explains, “Laws are different for tobacco and alcohol. While tobacco products and any extensions are not permitted to be advertised by law, in the case of alcohol, brand extension is permitted by law to be advertised, provided the extension is genuine. There are threshold levels of sales or business assets to be demonstrated for that. For example, some packaged drinking water or soda brands are large in themselves. So this would not be considered as surrogate advertising.” 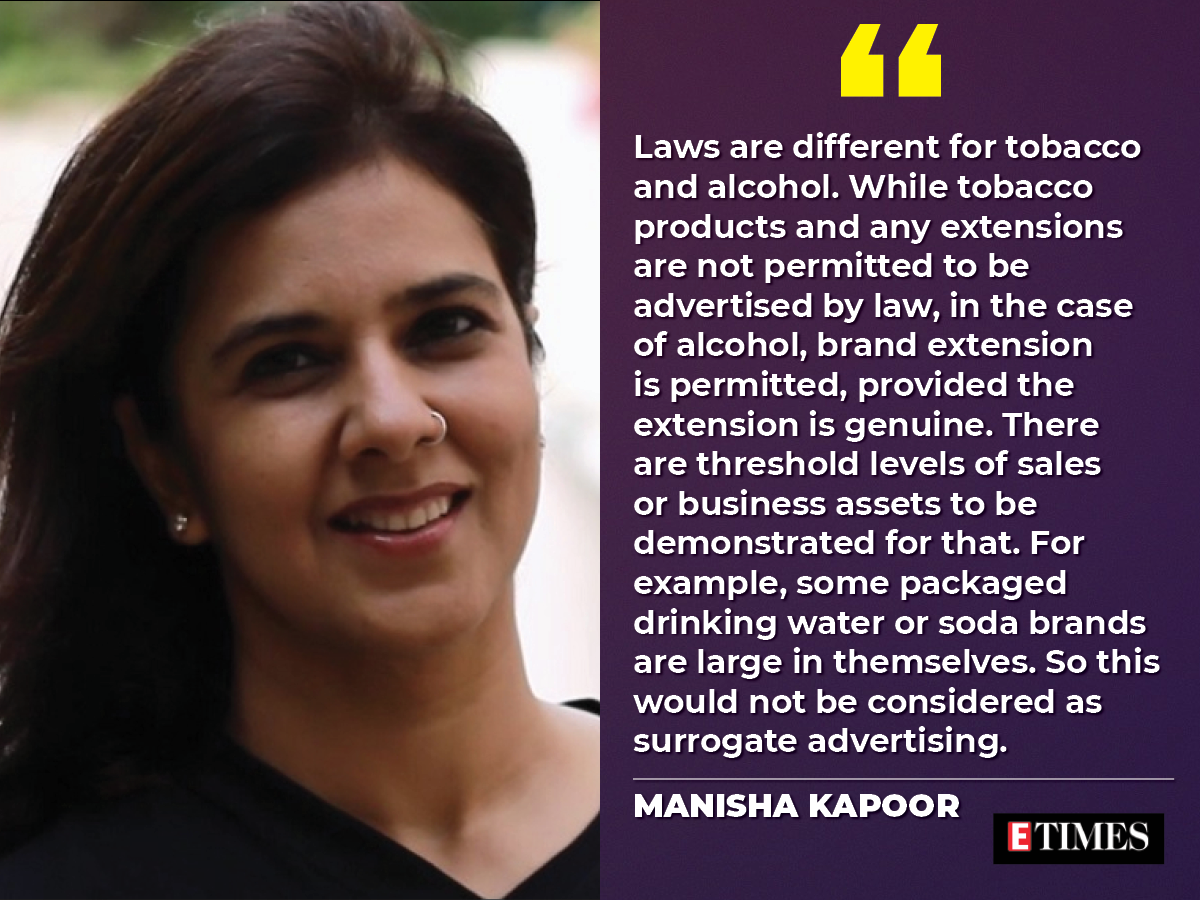 
The regulatory body in the advertising industry, ASCI, has a detailed celebrity guideline for brand endorsements. Essentially it says that a celebrity must not be part of an advertisement that makes any kind of misleading claims. Secondly, they must do their due diligence before they sign any endorsement. Celebrities must not participate in endorsing products which have a health warning with it. Furthermore, the Consumer Protection Act has penalties and punishments for celebs who are a part of misleading ads.

“Beyond legal, there is also a moral issue and a celebrity should respect the trust their audiences have in them. Brand action impacts celebs and vice versa. So both have to be careful while choosing each other. Citizens are hyper vigilant these days, so brands and celebrities have to be in tune with this environment. Most important is to be authentic. Even if someone criticizes your brand, the endorsement or the campaign, the question to ask is, ‘If everyone on the campaign believes in it, why not stand by it?” says Manisha Kapoor.


While ethical celebrity endorsement is one side of the story, on the other hand there have been instances when celebs have become the target for no apparent reason. Does this mean the audience has become more sensitive? Or is the role of social media, being a platform for easy voicing of opinions, fanning the uproar?

Reflecting on this, Taapsee Pannu, who has been vocal on social media says, “I don’t think I will say anything new or different about the sensitivity of our society these days or the policing that is happening, especially when it is an actor who is at the receiving end or the brands. We are the softest targets, we wake up on the wrong side of the bed sometimes. People have started considering it their birthright to impose their righteousness on everyone else and hence this insensitivity or rather over sensitivity. There will come a point where everyone will start co-existing.” 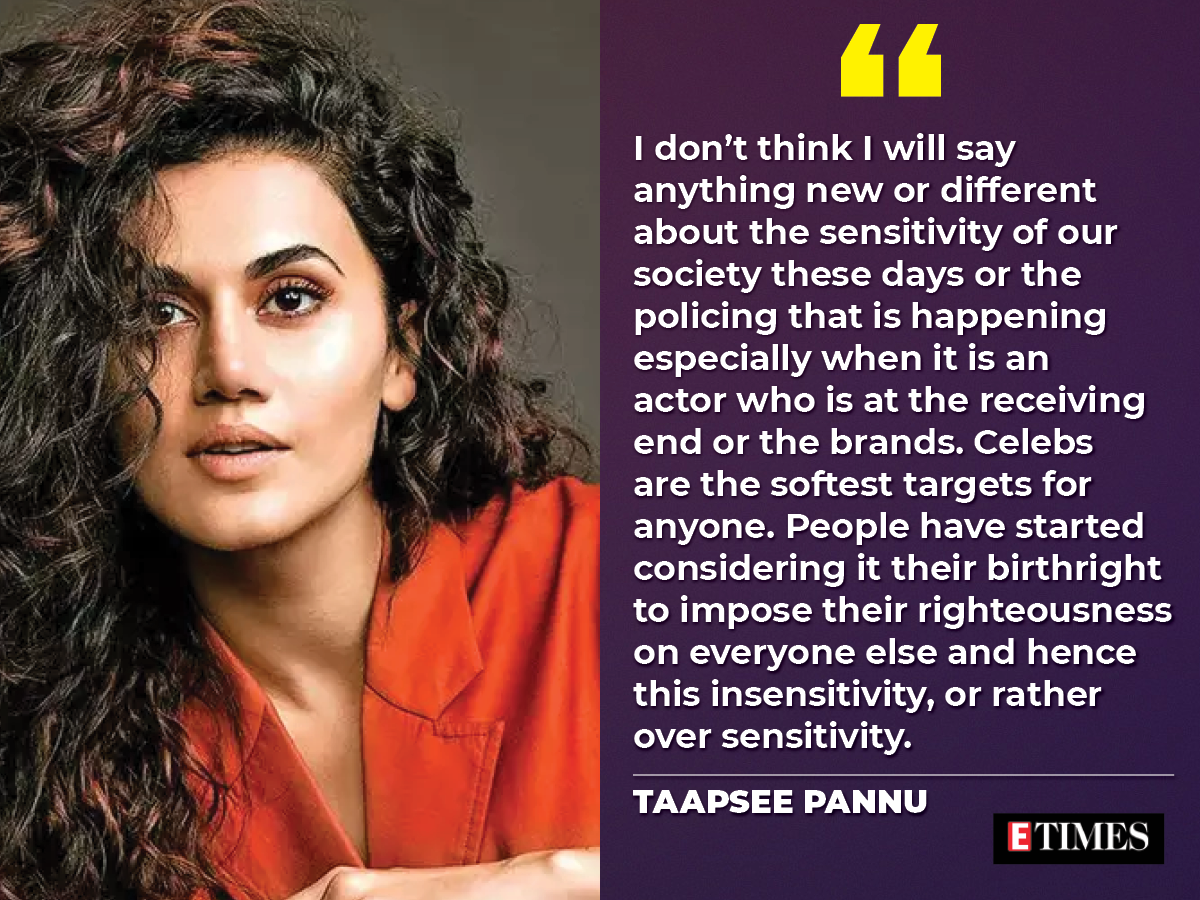 Back in the day, Milind Soman and Madhu Sapre’s shoe brand ad, where they posed naked with a python coiled around them had invited a lot of flak. Prahlad Kakar says, “There was nothing wrong with that ad. They did not have any clothes on them, but nothing was visible! It was done very aesthetically and it was a piece of art.”

He also stated today’s situation is a double-edged sword. “When a jewelry brand ad featured a Hindu girl married into a Muslim family, it got trolled by the right wing despite having a beautiful message. In such cases there are two choices – you either tell them to shut up or succumb to them. It’s an organized attack, it’s not something that is spontaneous. It is political and there’s an agenda behind such an attack. So, you have to decide where to draw the line. If it is due to reasons, it becomes your issue. If it becomes communal, you have to take a stand because the brand is also worried it will affect their market. But when it is a target attack, the brand should also understand, that is not their clientele,” he says. 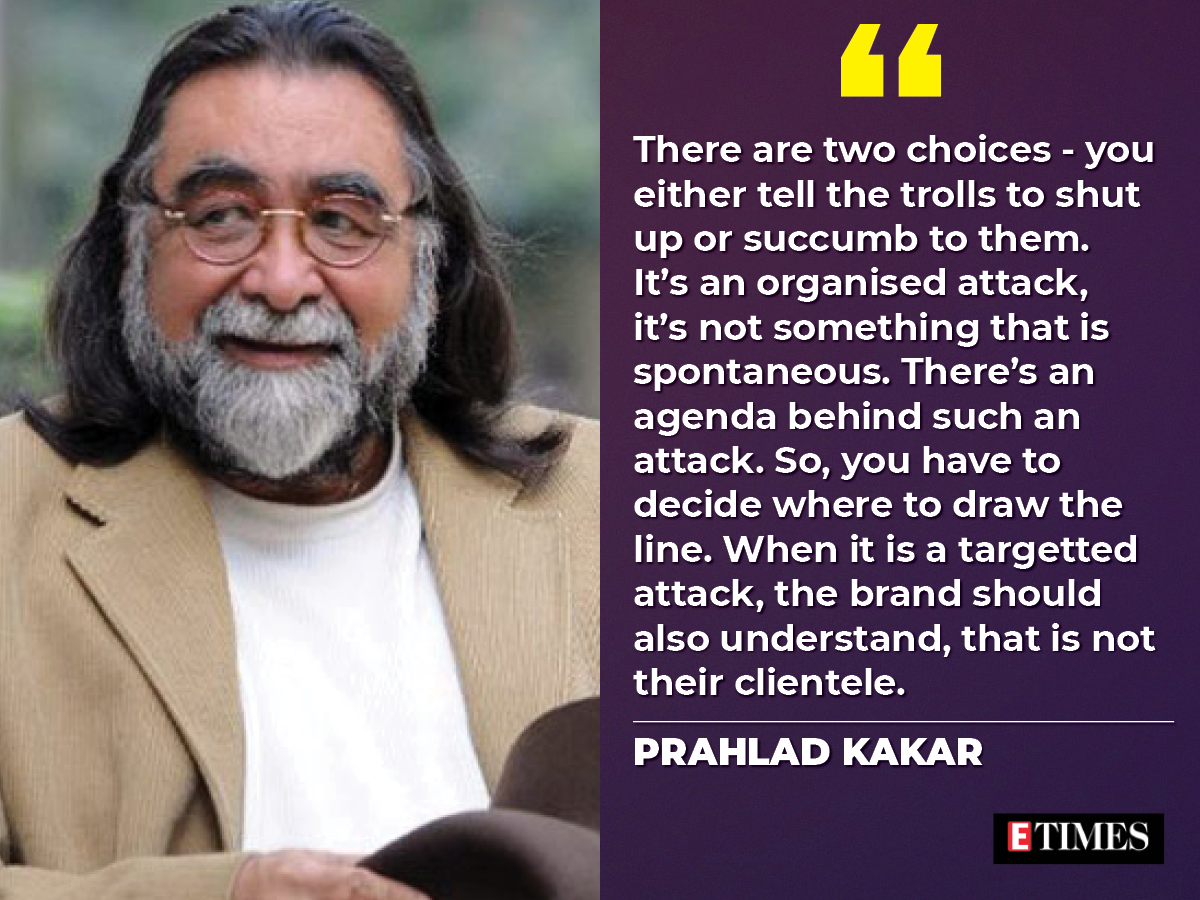 Director Ashwini Chaudhary thinks it has nothing to do with the hostile environment. “In the times of social media everyone with an opinion has a platform to express his or her views which was not the case a few years back. Actors and icons from other fields have been endorsing various products including surrogate advertising for years. Back then people kept their anguish to themselves, but not anymore. It is high time that stars and sportsmen become more responsible and choose the brands wisely. Products hazardous to the public at large should not be promoted by icons who are looked up to by millions in the society,” he says.

The freedom to make a choice is a basic human right. The choice may be right for some, wrong for others. But who are we to decide and dictate? Who are we to bully, troll or force someone to choose differently? 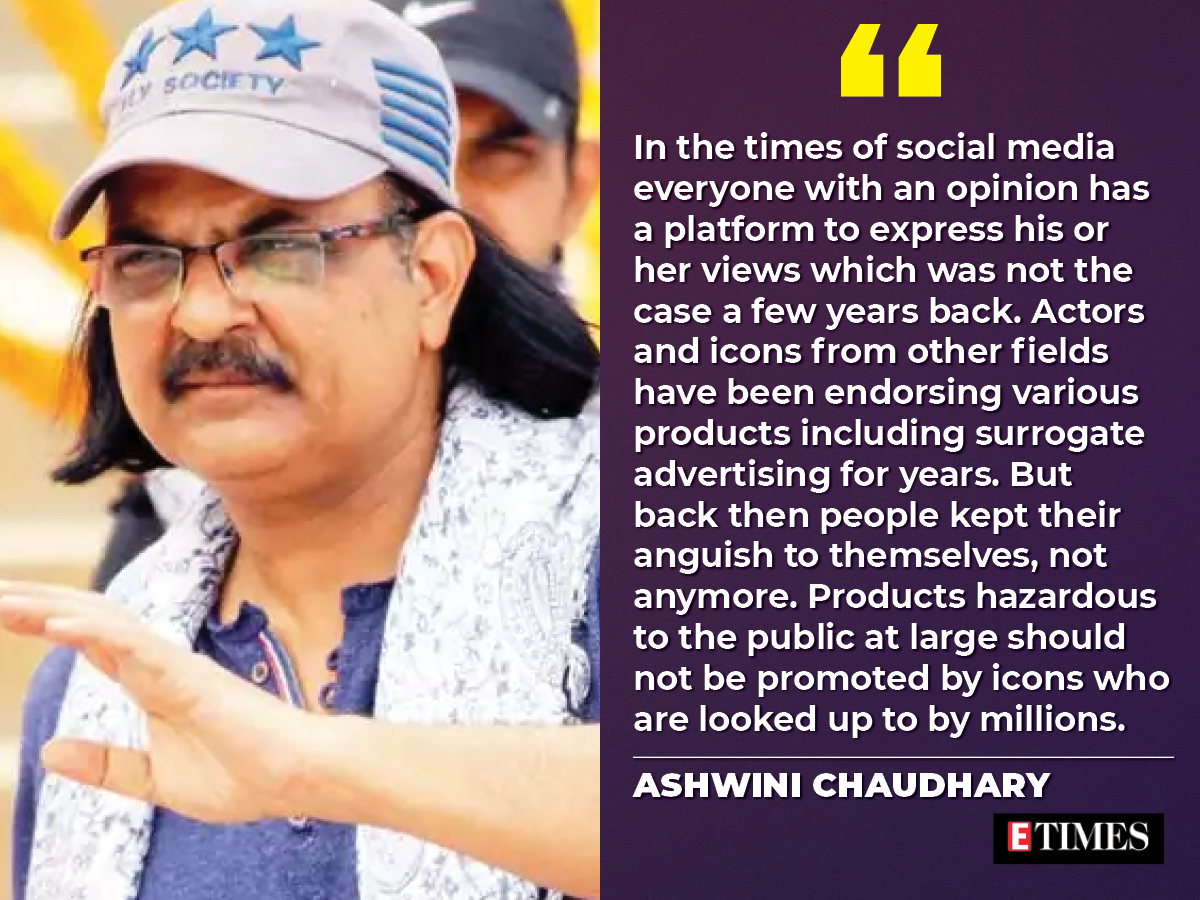 “I strongly feel that everyone has the right to choose their right or wrong. That includes celebrities as well. You might agree with them, you might not agree with them, that is very normal. If you really love them, I think you should respect their right and wrong and let them endorse or not endorse, whatever they like. A product that you might use, I might not. Doesn’t make it right or wrong universally. Dictating anyone that you should do this, you should not do this… especially if you like someone, you let that person make their own choice, even if it’s a mistake. They are allowed to make their own mistakes and learn from them in their own way. Bullying them, trolling them, forcing them is not how you treat people whom you consider your idol or stars. If you don’t consider them your stars or heroes, then whatever they endorse or not endorse shouldn’t bother you,” Taapsee concludes.