Chennai, priorly known as Madras is the state capital city of the state of Tamil Nadu. Being a metropolitan city, and the biggest commercial city of the Southern part of India, there are various MNCs and other offices located in Chennai. This is one of the major reasons a lot of people are migrating with their families to Chennai. Also, with summer vacations setting in, a lot of people are planning for a small weekend vacation around Chennai. This is the best way you gave burst your stress of the whole monotonous week at office. Just book a taxi service in Chennai with Chiku Cab and reach your weekend destination in style and comfort. According to your liking, you can always choose between trips which are leisure, recreational, or adventurous in nature nearby to Chennai. As an added benefit to travel by road, almost all the places of weekend getaway from Chennai are on routes which are scenic and beautiful in nature. Let’s have a look at the top places for weekend getaway from Chennai.

At a distance of merely 150 kilometers from Chennai, lies the Union territory of Pondicherry which is now officially known as Puducherry. Pondy, is an ex French colony which shares the southern border with the state of Tamil Nadu. It is especially known for its French Architecture, and is one of the best places you can visit to attain a relaxed state of mind with peace and calmness around. Also known as the White Town, this French Colony is filled with beautifully structured lanes filled with flowers of visual bliss. There are various cafes and boutiques set-up in Pondicherry which serve authentic French Cuisine and awesome French drinks. You can also sip on a few beers (cost of beers in Pondicherry are non-taxed), or ride your way on the beautiful rues of Pondy. Finally, when Pondicherry do not forget to get the glance of the vast Bay of Bengal and visit the renowned Rock beach. 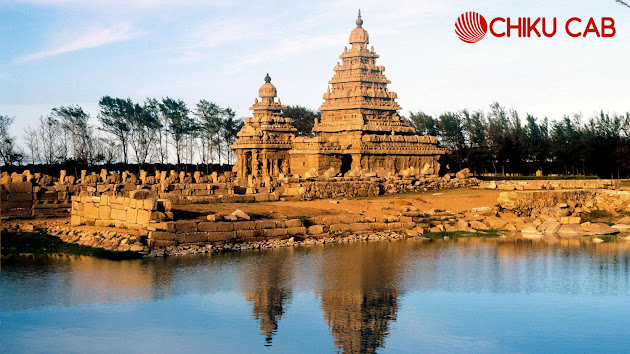 Ideal for the religious and spiritual souls, located at roughly 50 kilometers from Chennai is Mahabalipuram, a place renowned for beautifully carved temples and caves which are formed due to rock-cuts. All you need to do is book a cab service in Chennai with Chiku Cab and mention your destination as Mahabalipuram. Mythologically, it is said that Mahabalipuram was the residing place of the demon King Mahabali and thus the name was later changed to Mamallapuram. You will not understand how time speeds by when in Mahabalipuram on the white sand beaches which are bordered by beautifully maintained Casuarina trees. A lot of famous spots like the Shore Temple, Five Rathas, and the Crocodile Bank, where various species of crocodiles and alligators are found are famous in Mahabalipuram. You can even visit the UNESCO World Heritage Site of Group of Monuments here. For staying in Mahabalipuram the resorts on the beaches in Kovalam and Sadras really have no match anywhere. 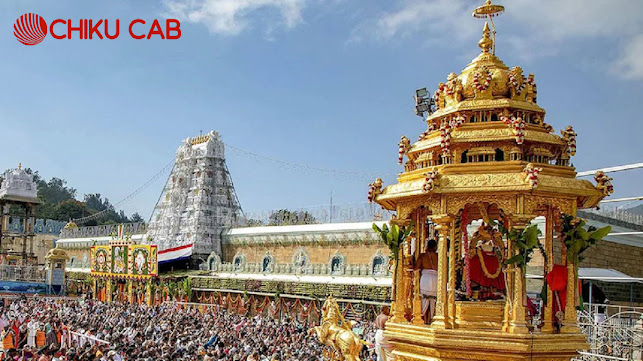 Sitting in the state of Andhra Pradesh at a distance of approximately 145 kilometers from the main city of Chennai lies the town of Tirupati, which is famous throughout the world for the Temple of Lord Venkateshwara. This makes Tirupati one of the most densely populated pilgrimage spot in and around India. The town of Tirupati is mentioned in a lot of holy scriptures of the Hindus, thus making this town as one of the oldest living towns in the world. The temple is Tirupati is spaced on an open land of 26 sq kilometers with an eight-foot-tall idol of Lord Venkateshwara. On an average 50,000 devotees seek blessing in this temple on a daily basis. The non-stop chanting of Om Namo Venkatesaya gives a vibe of positivity around the whole temple. There is a geographical wonder situated at the Tirumala Hills of Tirupati called the Silathoranam, which is a natural arch formed out of rocks.

Kanchipuram is at a distance of roughly 75 kilometers from the main city of Chennai, which can easily be traveled by cab booking in Chennai with Chiku Cab. It is famously known as the Golden City of Thousand Temples and is extremely famous for the Kanchipuram Sarees, a traditional Indian women wear. The architecture in Kanchipuram is so beautiful and neat that history and spiritual followers from all over the globe come to visit this city throughout the year. Located in an area of ​​40 acres lies the temple of Ekambeshwarar which was built way back during the Pallava Reign and is a famous place where to date lot of South Indian Classical Music Concerts are held in the evening. 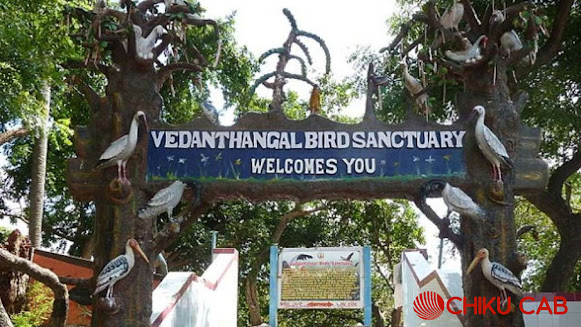 Located under 100 kilometers from Chennai is the city of Vedanthangal famous for its Bird Sanctuary. The Vedanthangal Bird Sanctuary is spread over 30 hectares of land and is the abode to more than 30,000 birds of different species. It is a massive water tank where migratory birds flock in during different seasons. At this bird sanctuary, photographers have been able to click natural images of birds like herons, storks, ibises, egrets, and spoonbills. A wonderful thing to know about the village surrounding this bird sanctuary is that these villages use the birds droppings as fertilizers owing to the richness in nitrogen in them, and thus helping them save money on the other industrial made fertilizers. The Vedanthangal Bird Sanctuary is considered to be the first Bird Sanctuary of India. 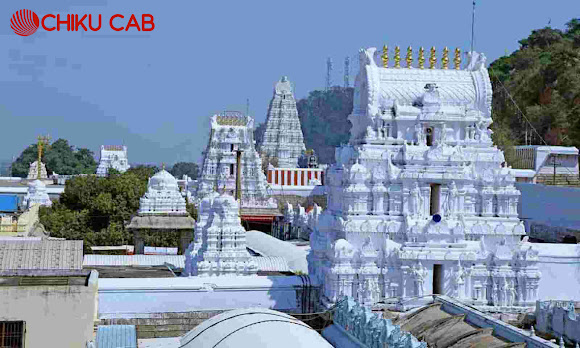 It takes around 2 and half hours by a car on road trip to reach Shreekalahasti from Chennai. It is widely renowned for the Shiva Temple built here during the Pallava reign. Almost all the tourists are impressed because of the beautifully kept temple and other shrines in this town. The Dravidian architecture style used to build this temple gets highlighted because of the intricate carvings and gopurams on the interior as well as the exterior of the temple. When in Shreekalahasti don’t forget to spend time at Veyilingala Kona Waterfalls, a natural-scenic beautiful picnic spot. 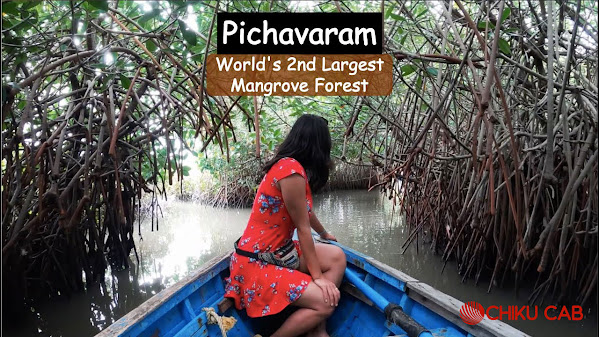 Sitting at a distance of a little above 200 kilometers from Chennai, lies the Pichavaram Mangrove Forests, which is considered to be the second largest mangrove forest in the world. The complex canal and river bridging system here keeps even a lot of engineers in awe. You can enjoy a beautiful boat ride around the 1100 hectares area of ​​the forest. The sea or specifically the Bay of Bengal lies at just a distance of 6 kilometers from this water body and both these water bodies are separated by just a sand bank. 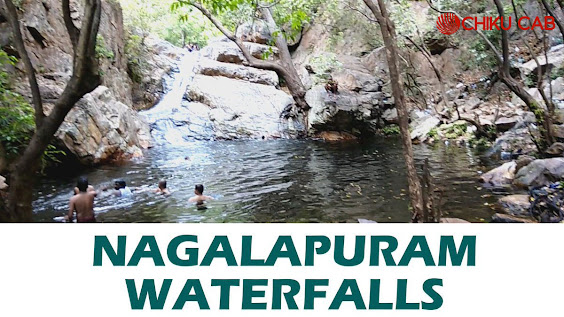 Also known as the Nagalla Hills, Nagalapuram is a treasure hidden in the ever-green forests of Tirupati in Andhra Pradesh. Hardly a two-hour drive from Chennai, this naturally scenic beauty town is known for a lot of adventure sports which are on offer here. Another fascinating thing at Nagalapuram is the Nagalapuram Waterfalls, which is a blend of three waterfalls which gives an excellent opportunity to the trek lovers to climb up and witness a beautiful panaromic view of the plush green forests.

Summers in the southern part of India are really scorching and thus everyone prefers for at least a weekend getaway from the city to the above-mentioned places for spending a relaxing time with their friends and families. Now you can hire a taxi service in Chennai with Chiku Cab who will drop you off at the destination places in a hassle-free and comfortable manner. Plan a trip now and get your bookings done online for the perfect weekend getaway.