The K-Pop sensation BTS, dubbed as Princes Of Pop, are also the Kings Of Chaos, as labelled by their ardent fandom ARMY. When it comes to watching them on their variety shows, Run BTS, Bon Voyage and In The Soop, their fans almost forget that the septet has swept Billboard charts, been nominated for the Grammys twice, spoken at the UN, Blue House and now even White House. Their shows prove to the fans that they’re just relatable 20-somethings, squabbling over video games and cheating in games (looking at you Jimin). Ahead of their 9th debut anniversary, here’s looking back at some of the most hilarious moments caught on camera.

Suga in a zombie apocalypse.

How would BTS handle zombies? Well, this episode gave us an idea. In the episode, the members go off on a night safari, only to be attacked by ‘zombies’. They were then divided into teams and had to complete missions so that they could win tickets to an amusement park. J-Hope, Jin immersed themselves in character to the extent that J-Hope couldn’t stop screaming every time a zombie jumped out at them and even lost his shoe in a chase. Suga decided to throw a couple of punches at zombies, while RM remained rather zen throughout the episode. Jin, who is a self-proclaimed narcissist, didn’t fail to remind everyone that he is still Worldwide Handsome (as he often calls himself) in the zombie outbreak. Some things never change. 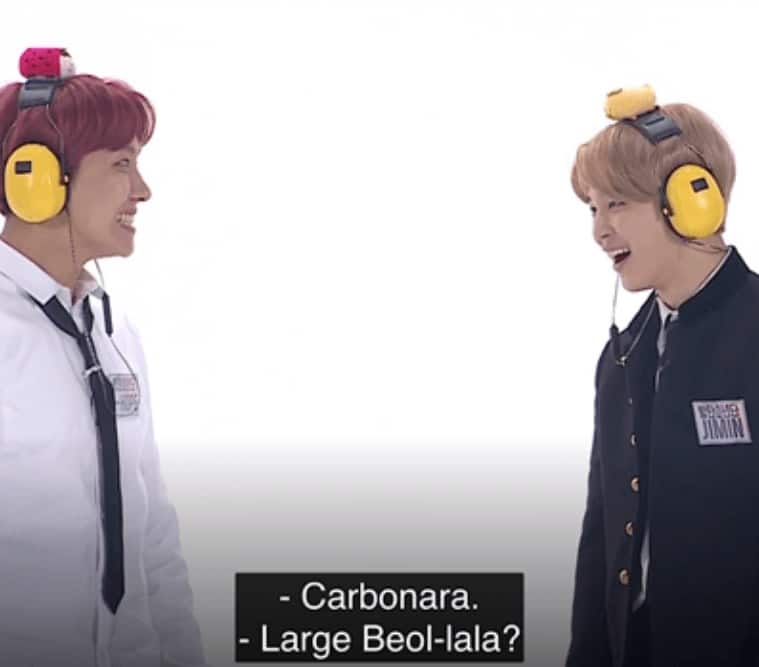 Jimin doesn’t have the best luck in games and often has to face the band’s exasperation. The members were divided into teams, all wearing headphones with blaring music. A member from the opposite side would give a team the word, and they had to convey it to the next person, while wearing headphones. Jin, became the master of the game, even though Jimin bungled up the word ‘carbonara’ despite J-Hope’s best efforts. Jimin interpreted it as ‘lachibolala’ essentially gibberish, but miraculously, somehow Jin got the word carbonara. The episode showed Suga breaking out of his reserve and pulling a few fun dance moves in excitement. Lachibolala still lives on rent-free in ARMY’s vocabulary. This, by far, was one of the most chaotic episodes of Run BTS and there came a point where nothing almost made sense anymore and only laughter could be heard. The boys were divided into teams where they had to debate over random topics for seven rounds of eleven minutes, with each member taking turns to be a debate moderator. The twist was that they would receive a barrage of water over their heads or water jets, every time they mentioned a ‘forbidden word’ or action. So they would spend each debate being mercilessly attacked by water as they struggled to find what the word or action was, and sometimes they did it intentionally too. Jin relentlessly got Jungkook hit by seven water buckets, leaving the poor maknae (youngest member of a team) drenched and miserable. 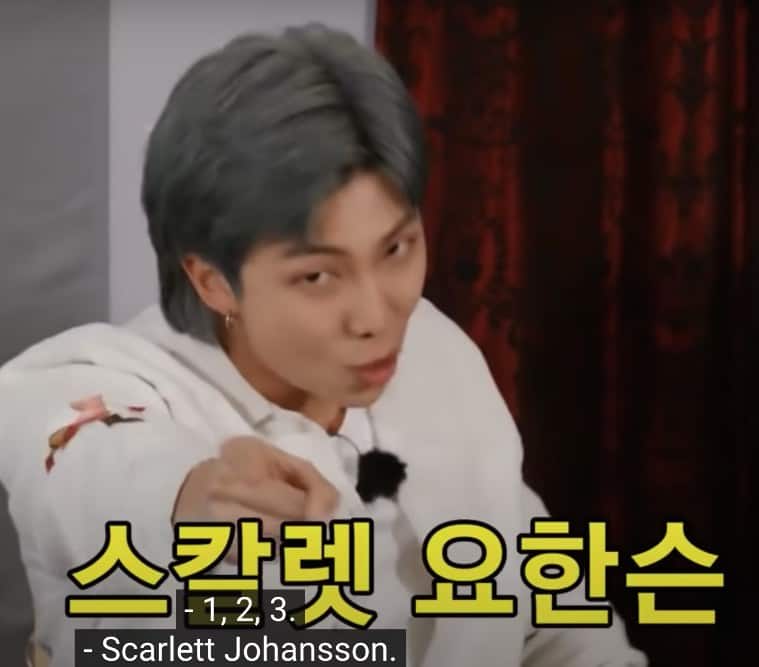 This episode had innumerable memorable moments, including the attendance game, where one member had to point at another member, while saying a different name. The highlight of this episode was when they had to guess a celebrity quickly when the picture was shown to them. Failure to do so, would result in one less dish for lunch. BTS is extremely protective about their food, even more than their music, as demonstrated by when they instantly sacrificed their album, rather than giving up a dish. The best moments were when V failed to recognise Robert Downey Jr, and called Leonardo DiCaprio ‘Ricaprio’, leaving the rest of the members flouncing in anguish. 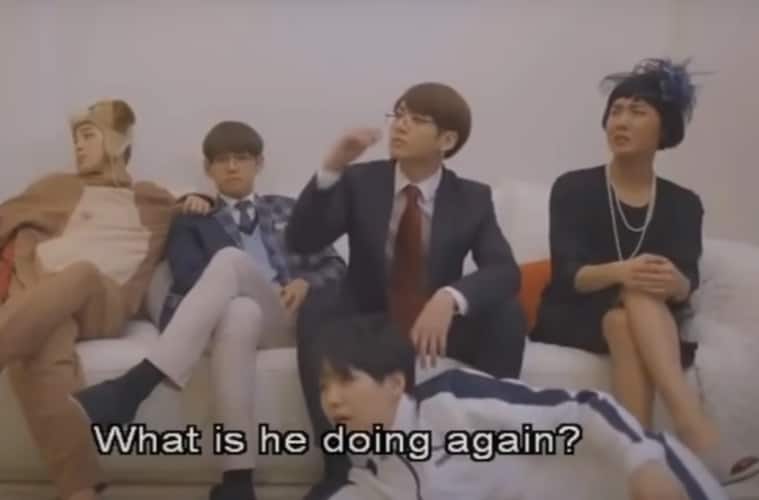 In this side-splitting skit, BTS pretends to act as ARMY themselves. RM is an excited schoolgirl, while J-Hope plays his mother and Jimin plays the family dog. Jungkook plays the role of the father, while Suga is an over-enthusiastic uncle and Jin plays the role of household items, including a clock, banana plant. J-Hope’s ‘Calm down, calm down my daughter’ will forever be legendary.

5. Cooking lessons from Jin and Suga 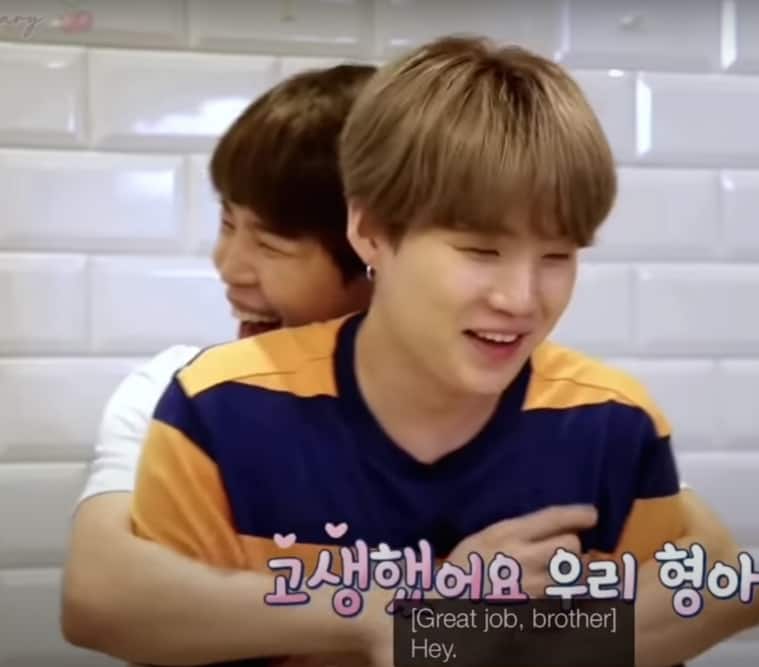 Jimin trying to placate Suga after almost ruining a dish.

BTS in the kitchen is never a good idea. In this episode of Run BTS, chefs Jin and Suga were assigned two teams and had to direct them through a mic how to cook in the kitchen, with J-Hope as emcee. Jin didn’t have too much of a struggle with the maknaes, Jungkook and V, while Suga had a hard time with RM and Jimin. RM and Jimin failed to taste salt or sugar, and in an attempt to save their stew, lathered more salt on it by mistake. The hilarious part of the episode was when Jimin used an old squirrel bowl for the stew, and did exquisite plating by placing his pancake on a bunch of spring onions. An exasperated Suga told them later, “If Gordon Ramsay was here, he would have slapped you!”

As part of their Halloween specials, BTS decided to dress up as characters from Snow White And The Seven Dwarves for their dance-recording sessions. V lost the rock-paper-scissors challenge and had to dress up as Snow White, while the rest of the members played dwarves. What ensued in the dance rehearsal was pure hilarity, as apart from the fact that V found a way to use the apple in the choreography, Jin’s dwarf shoes were too big for him and they kept flying off during practice. At the end of the session, V takes a bite of the apple and supposedly falls dead, while J-Hope shoots money into the air. Suga grabs money and walks off, not really bothering about his fallen bandmate. 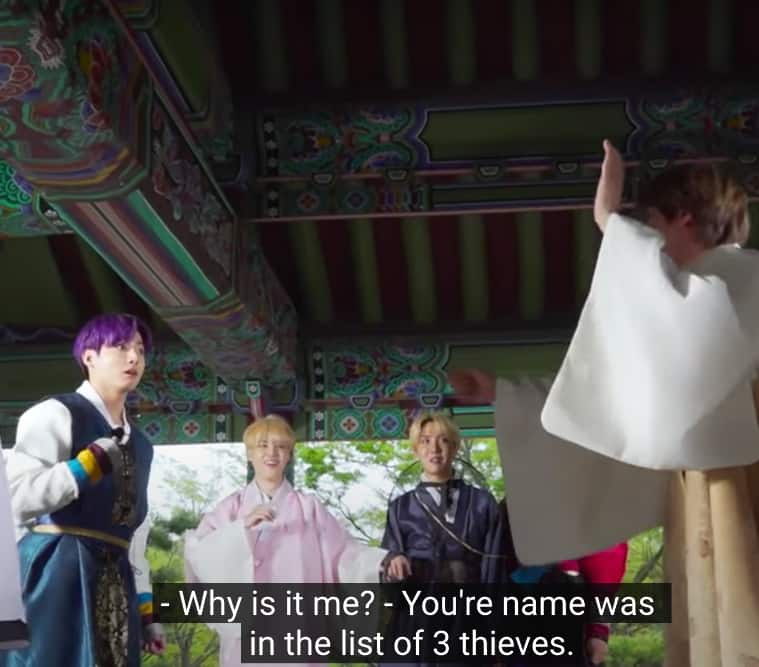 BTS member Jungkook felt rather confused about this game.

The basic premise of the episode was that the members had been transported back in time and were given clues to solve a mystery, and most importantly, had to figure out who among them were thieves. There was much suspicion about Jungkook, though he kept insisting that he was innocent, and even the staff tried to trick him into thinking that he was the thief. V, on the other hand, was too keen on playing with cats, and fumed when questioned, “Is it wrong to play with animals?” When Suga played the role of a female transfer student.

In this episode, the BTS members return to school and are given different characters. Suga played a female transfer student, RM had to play a ‘nice slow-witted’ student, V was the introverted nerd, Jungkook was the ‘kind-hearted guy’, Jin is the school idol, Jimin is the classroom leader and J- Hope is the ’emo kid who is always into literature’. Suga stayed true to his brittle and sharp self even as an awkward female transfer student, and in one of the best moments of the episode, J-Hope emptied a bottle of water on himself in an effort to look emotional, leaving the others in splits .

In this episode, the members had to guess which one of their songs was being performed by a non-performer. The hilarious part was that J-Hope, who is the team’s dance leader got it wrong every time and Jin just couldn’t let it go and continued teasing him.