The best thing about Janhvi Kapoor is that she’s not derivative. She doesn’t try to ape her late mothers mannerism. She’s her own person. It’s like she’s on slow burn and gradually she will unravel to reveal layers and layers of nuance. Her choices of films be it the forthcoming Mili or Bawaal reveal a careful pragmatism. She’s in no hurry to be part of just the vain dolled up brigade. Her debut was preceded by tragedy but she’s bore it all stoically. And there was honor too her sorrow. Never making it a spectacle.

And while she’s a papparazzi darling, she can stay away from the madding crowds. Her social media may be abuzz with gym and travel pics but JK is beyond it all. Searching for her place in the sun and has time and again proved that she’s not willing to settle for less. Which all adds up as the right time to quiz her on the many twists and turns in her life and career.

What’s on your mind lately?
What’s on my mind lately is the fact that I want to get out of Mumbai.

Both your upcoming films, Good Luck Jerry and Mili are South remakes. How are you excited about them?
I am extremely excited; I feel like we have tried to do something different with both these films and I have had such a lovely time shooting both of them.

Your father has become a trusted producer in the South. Any chance of working in one of his South productions?
You know I really want to do a South film, whether it’s Tamil, Telugu or Malayalam. I have been such a fan of their cinema for such a long time now and I think I’m just waiting for the right opportunity.

Is it advantageous for an actor to do a remake as it’s already proven itself at the box office? Also, because you already know what you’ve to perform?
I think doing a remake has its pros and cons. Obviously, you know that it’s a film that has been loved by a large group of people. However, I still do think that it is a fun balance between still respecting the material and the intention with which the material was made. Because I think every successful film or anything successful in general appeals to people if it has been made with a pure and honest intention. So I think that needs to be kept intact and respected. And I think whoever is making it again needs to have a perspective on it that’s individual to them if it is another filmmaker. If it is the same filmmaker I feel like they anyway have the original perspective which has already been resonated with so many people.

Currently, it’s been said that there’s no demarcation left. Every film, be it from South, North, East or West has the potential to be a pan-Indian film. Do you subscribe to that view?
I think I appreciate the idea of us striving towards making cinema that would appeal to a larger audience, to an Indian audience, and to speak of our films as a representation of Indian Cinema, I think that’s a lovely thing. There is a charm in regional cinema in the way that it appeals to a more localized audience and that it is more relatable and more colloquial in that sense. That still needs to be preserved and valued. And so, both types of films can co-exist and will co-exist.

Also, the OTT sector has really evolved. You had an OTT release in Gunjan Saxena. And now we hear Good Luck Jerry would also have an OTT release. Are you happy with the decision?
I don’t think the OTT release of Good Luck Jerry has been confirmed. I’m not too sure what decision the makers are leaning toward, but I think for an actor it comes down to your film reaching as many people as possible and during the pandemic, Gunjan releasing on Netflix seemed like the most viable option and it did reach a lot of people which I’m very happy about. Right now, OTT films are given as much respect as theatricals. They are both different and there is a charm and appeal in both kinds of films. We are going to now see an evolution in cinema and evolution in films, and an evolution in an actor’s and filmmaker’s outlook and that they understand that both types of films can co-exist.

There was a time when big-screen actors would shudder at the thought of doing anything on TV. Do you think your generation of actors has broken out of that mold?
I think that there was maybe a stigma related to OTT or TV but I think that we have all become more open-minded now for sure.

Be it Gunjan Saxena, Roohi, Mili or Good Luck Jerry, all your films have been women-centric films. Is it a conscious decision on your part to do such roles?
I don’t think it has been a conscious decision. I have just been doing the kind of films that excite me, roles that excite me. Honestly, I have been chasing some stuff, and at the end of the day as an actor, you can only perform in things that you are ultimately decided for. And these are the films that ended up coming together for me and I am extremely thankful for that.

What is your take on celebrities sharing their opinions on socio-political issues? Do you think celebs,
as public figures, should take a stand on matters?
I think it is a matter of personal preference but with a great deal of power comes a great deal of responsibility, I know this is a Spiderman quote but it holds true. I think that when you are a celebrity a certain number of people look up to you and listen to you when you have the power of voice and the power of reach. And so you need to respect that, you need to understand that and make educated and informed decisions, educated statements, and just be a little responsible about what you say. That in no way means having a neutral stance on things, if you chose to have a neutral stance that’s fine it is completely your decision. But if you have an opinion, it would mean a lot to make sure that it is an educated one. Especially if you are advocating it because we are impressionable people. And I think as the public and as a member of the audience what we can do is to be more open-minded about different people’s opinions and appreciate that they can have different views as well.

What is an issue close to your heart?
I think feminism is extremely close to my heart. I feel some people don’t even realise how deeply ingrained gender roles are not just in our country but all over the world no matter what strata of society you come from.

How have you dealt with the absolute loss of privacy that comes with being a celebrity?
I think I was doing a fairly decent job before the lockdown but then I think I got used to having my privacy back a little bit during the lockdown which was nice. Now that things are opening up again it’s suddenly feeling a little new to me all over again. It’s an occupational hazard and a small price to pay for being able to do what I love.

Do you ever feel that no matter how well you perform or how well your films do at the box office, people will overlook that and still talk about nepotism?
I hope that eventually my films and performances will be enough for the audiences to overlook where I come from and my lineage. I think that a large part of my life journey has been to try to prove to myself that I am more than just who my parents are. 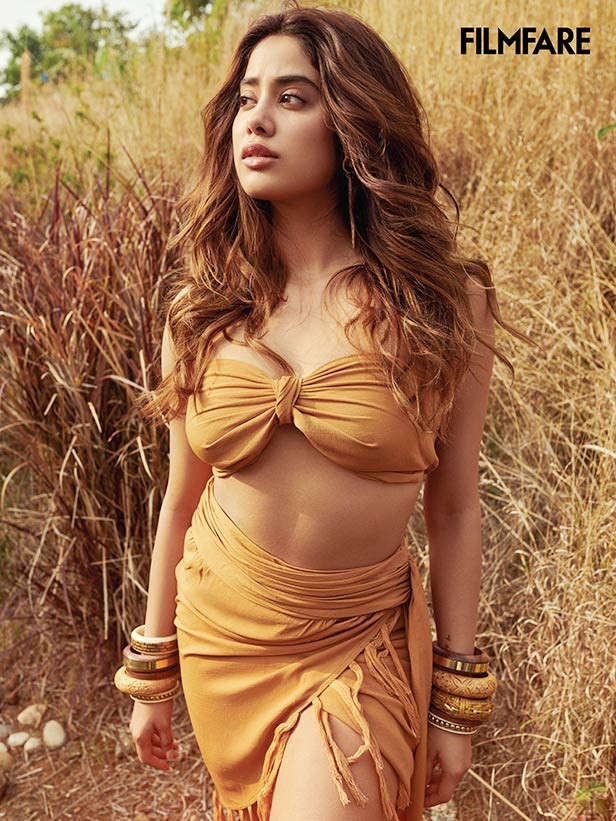 Is it true that you were named after Urmila’s character in Judaai?
No, I was not named after Urmila’s character in Judaai. I think dad just really liked the name from before the film and mom did too. I think mom was really obsessed with the idea that the meaning of it was purity and she would keep looking at me and keep telling me that I look pure and pure soul and things like that. So I feel it really resonated with her in that sense.

How does it feel when someone says you remind them of your mom?

It feels good when they say that I remind them of my mom. But it’s also logical, I mean we have the same genes. But it means a lot. I think that I get so happy when I see so much of my mom in my sister and I like to think that it’s vice versa too so to me, it’s comforting and obviously very flattering.

Arjun Kapoor has said in his interviews that accepting you and Khushi as a part of his life has made him a better person…
I think having Arjun Bhaiya and Anshula Didi as a part of our lives has made us more secure and stronger individuals. For the lack of a better word, I feel more wholesome. At a later stage in life, we got two more siblings. I don’t know who else can say that and I think that I’m extremely lucky and it doesn’t get better than that. 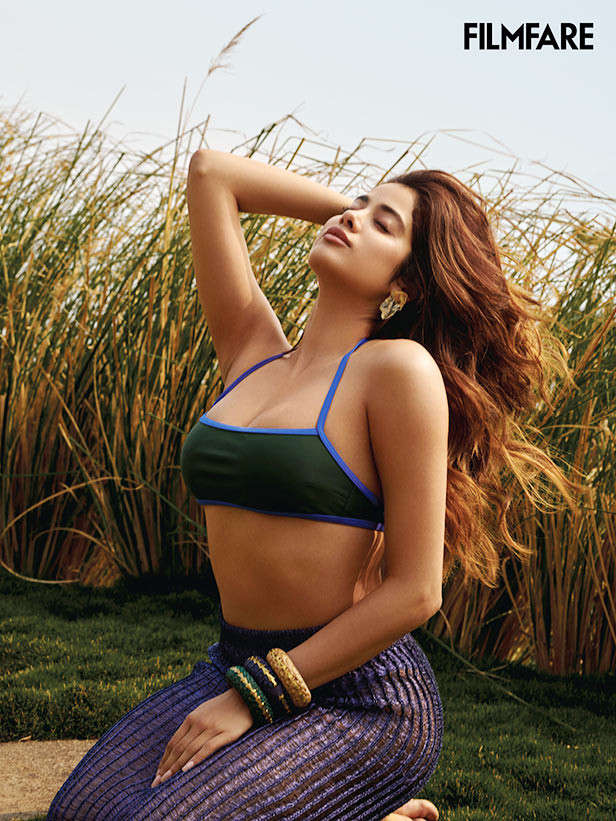 Being a single parent isn’t easy. How does your father cope with that?
I think it’s new for papa but honestly, he’s become more of a friend to us than anything else and I think our relationship has become more honest and transparent. I don’t know, I think that it’s a very functional ecosystem, at least that’s how I feel about my relationship with my dad. I think the four of us each have very different individual relations with him. I like that me and him feel like a team and I like that he’s my best friend

Who among your co-stars inspires you to excel? Who do you admire the most?
I think I’m definitely Pankaj Tripathi’s biggest fan. He is definitely my favorite co-star.

You travel up a storm. Is it your way to detox?
Honestly, the three things that I live for are to act and travel and eat.