An 11-HOUR curfew was imposed in Punjab’s Patiala from 7 pm on Friday after the police fired several rounds in the air to avert a clash between members of Shiv Sena (Bal Thackeray), who had called for an “anti-Khalistan” march, and Sikh and Nihangs brandishing swords outside the Kali Mata temple, officials said.

The incident also led to stone-pelting by both sides, officials said, adding that at least four persons, including two policemen, were injured in the clash.

The incident was the first major law-and-order incident in the state under the new AAP government. While Chief Minister Bhagwant Mann called for an “immediate probe” and directed officials to ensure that those guilty are not spared, the Opposition Congress and SAD criticizing the state government for what they described was “anarchy”.

On Friday evening, the Shiv Sena leadership in Mumbai directed its Punjab unit to take “stern action” against all those linked to the party who were involved in the clash. In a statement issued through the Punjab unit, the Sena said it has expelled a local leader, Harish Singla, who had allegedly led the “Khalistan Murdabad” march.

A clash between Shiv Sena workers and Nihang Sikhs near Kali Mata Mandir in Patiala on Friday. (Express Photo By Harmeet Sodhi)

Two more cases on various charges, including attempt to murder (IPC section 307) were registered against “unknown persons” on complaints from both sides involved in the collision.

Singla has been described as the working president of Shiv Sena (Bal Thackeray), the unit of the Sena in Punjab. The state has about 15 Sena factions, including Shiv Sena Samajwadi, Shiv Sena Rashtrawadi, Shiv Sena Hindu Bhayia and Shiv Sena Akhand Bharat.

Leaders at the Sena HQ in Mumbai said the party directed the Punjab unit to issue an official statement announcing the action against Singla. “Punjab Shiv Sena (Bal Thackeray) working president Harish Singla has been expelled from the party. Along with him, a few party workers were also suspended. Singla led a protest rally in Patiala. The march turned violent, leading to collapsing with some members of Sikh organisations,” the statement said. 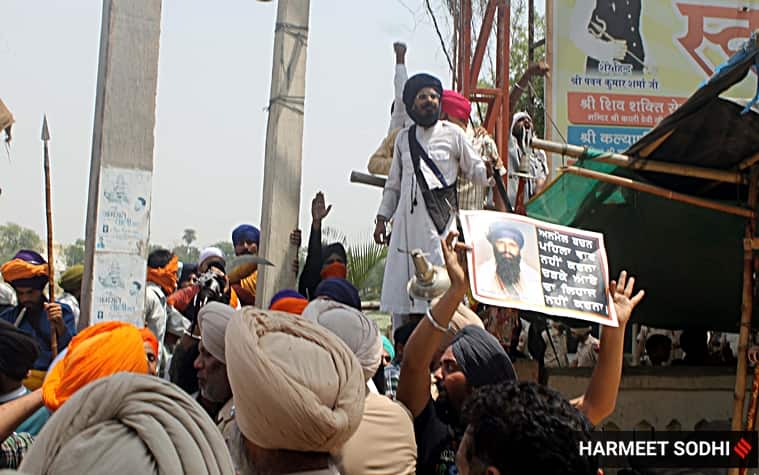 A clash between Shiv Sena workers and Nihang Sikhs near Kali Mata Mandir in Patiala on Friday. (Express Photo By Harmeet Sodhi)

Sena MP Sanjay Raut said the group involved in the speech was “not a Shiv Sena unit”. “Some people claim to be from Shiv Sena. They have no connection with Shiv Sena. We have already said that they should be removed,” Raut said.

According to Sharma, the party had written to the Patiala SSP on April 20 to convey that it had nothing to do with Singla’s call, which was made in “his personal capacity”. Singla was not available for comment.

Singla had announced the march around 15 days ago after the banned outfit, Sikhs For Justice (SFJ), gave a call to observe “Khalistan sthapna diwas (Khalistan foundation day) in April across district police offices in Haryana”. 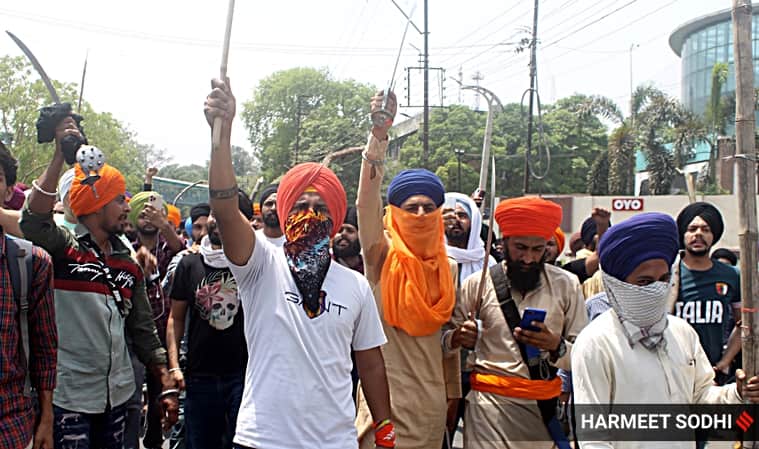 A clash between Shiv Sena workers and Nihang Sikhs near the Kali Mata Mandir in Patiala on Friday. (Express Photo By Harmeet Sodhi)

Following the clash, Singla was attacked by members of the local Hindu community outside the temple on Friday evening when he had come to attend a meeting. They accused him of “vitiating the atmosphere with the march”, officials said. The windowpanes of Singla’s car were shattered, they said.

Officials in Patiala said curfew was imposed till 6 am on Saturday due to “incidents of breach of peace and disputes between certain different groups in the district, which can result in further disturbance of peace and communal and maintenance of law and order”.

Describing the incident as “deeply unfortunate”, Chief Minister Mann posted on Twitter: “I spoke with the DGP, peace has been restored in the area. We are closely monitoring the situation and will not let anyone create disturbance in the state.”

Mann tweeted that his government “will not allow anti-Punjab forces to disturb Punjab’s peace at any cost”. The AAP, meanwhile, posted pictures purportedly from the clash and accused two people shown in the images of being BJP leaders with links to the party’s top leadership.

Taking to Twitter, Congress leader Rahul Gandhi said the “visuals from Patiala are disturbing”. “I repeat, Peace & Harmony are most imperative in a sensitive border state like Punjab. This is not the place to carry out experiments. Earnestly appeal to the Punjab govt to ensure law and order is maintained,” he posted.

Punjab BJP chief Ashwani Sharma told reporters in Chandigarh “it is a matter of grave concern that such an incident was allowed to happen”, and that the administration “should have been alert”.

Detailing the sequence of events, police officers in Patiala said that a group of Nihangs gathered at Dukh Niwaran Sahib gurdwara to counter the Sena unit’s call and marched towards the temple raising slogans. They were joined by other Sikh, they said.

The police team, including Patiala SSP Nanak Singh, fired several rounds in the air to disperse the Sikh group which had reached outside the temple. A separate police contingent was at Arya Samaj, a kilometer away, where those supporting Singla’s call were holding the march.

SHO Karanvir Singh from Tripuri police station sustained a minor hand injury while trying to stop the Sikh group, a police officer said. “A head constable also got injured and had to be administered 15-16 stitches,” SSP Singh said.

According to the SSP, Sikh alleged protesters that a member of their group suffered a gunshot injury. “We are getting it examined by doctors,” he said. A member of the “anti-Khalistan” march sustained a “minor injury” on the hand allegedly caused by a sharp-edged weapon, the SSP said.

The Sikh later caused on a dharna demanding action against those who the “gunshot injury” but dispersed after being assured by the police that a separate case would be registered.

Punjab Congress chief Amrinder Singh Raja Warring condemned the incident, and appealed to all for maintaining law and order and peace. SAD president Sukhbir Singh Badal tweeted that the incident was “deeply disturbing and a cause for grave concern”. “Administrative paralysis in the state has seen law & order situation drifting towards anarchy in recent weeks,” Badal posted.