When chef Radhika Khandelwal stirs her pot of memories, she stops at the moment when she sat with her grandmother under the winter sun shelling peas. “We’d snack on some and keep the pods away because these couldn’t be wasted. She blanched them and cooked a finger-licking dish. Just like the leftover carrot tops and leaves, which she squished into a lush chutney,” she says.

Today, the no-food-waste mantra she inherited is the pivot of her restaurant, Fig and Maple in New Delhi, where she serves pumpkin seed to skin barley risotto made with pearl barley and pumpkin, flesh to seed and skin. Her rich sauce, made from tender leaves of the tamarind plant, wraps her baked fish with umami flavours. To work up your appetite, try out her vegetable peel chips and scoop up the pea pod pesto.

The root-to-shoot eating and zero-waste diet may be a talking point at climate change conferences. Restaurants across US, UK and Europe may have repurposed unloved edibles as hot salsa, relishes, toppings, finger foods and even have dried fungus lamps for decor, but Indians have been following this for centuries as a lived reality. But yes, the sustainability debate is critical to the planet’s future. Think-tank Capgemini Research Institute’s latest report, “Reflect. Rethink. Reconsider. Why food waste is everybody’s problem” reveals how 2.5 billion tons of food are wasted each year. With 60 per cent consumers now feeling guilty about this dump, imagine how preserving just half of that could save 811 million malnourished people. But leave the cause aside and you would find the root-to-shoot philosophy informing every aspect of our lives, be it for their medicinal and nutritional value, for scarcity of resources or simply for a ritualised remembrance of tradition. Indians have for long known to make the everyday exotic. As Delhi-based food Publisher Pushpesh Pant explains, “We were foragers before we became a river civilisation. We learn to subsist on whatever was available, consuming leaves, stalks, skins, shoots and roots of the forest produce. The tradition of sun-drying, pickling, chutneys, sauces and relishes evolved to prolong the shelf life of seasonal food. From the hills to the coastline, food traditions involved the simple art of making a paste, tempering or preserving it. Something as basic as the potato would be ash-baked, dusted, stone-ground and made into a paste, the skin giving off a sour taste. If lucky, people would stir it in mustard oil tempered with whole cumin or coriander seeds. Frying came much later. Even discarded parts of meats would be put together with some local vegetables, like the cartilage of chicken cooked in southern parts of the country. The complexity in food came courtesy of what I would call the riches of poverty.”

Women, who ate last in line because of social custom and were often left with food scraps, ensured that their morsels were tasty enough. “They glamorized food preparation with a deft combination of chewy fibres to mimic meats, used seeds for crunch and once the onion became a staple, elevated the flavor profile,” adds Pant.

Khandelwal, 34, believes that native food cultures aren’t about mindful eating or a deliberate attempt to cut down food waste. “It is as simple as, if it’s edible, it’s food. The recipes revolving around these ingredients that we now classify as ‘waste’ are essentially about making nourishing elements palatable, so that essential nutrients do not end up in the bin.” 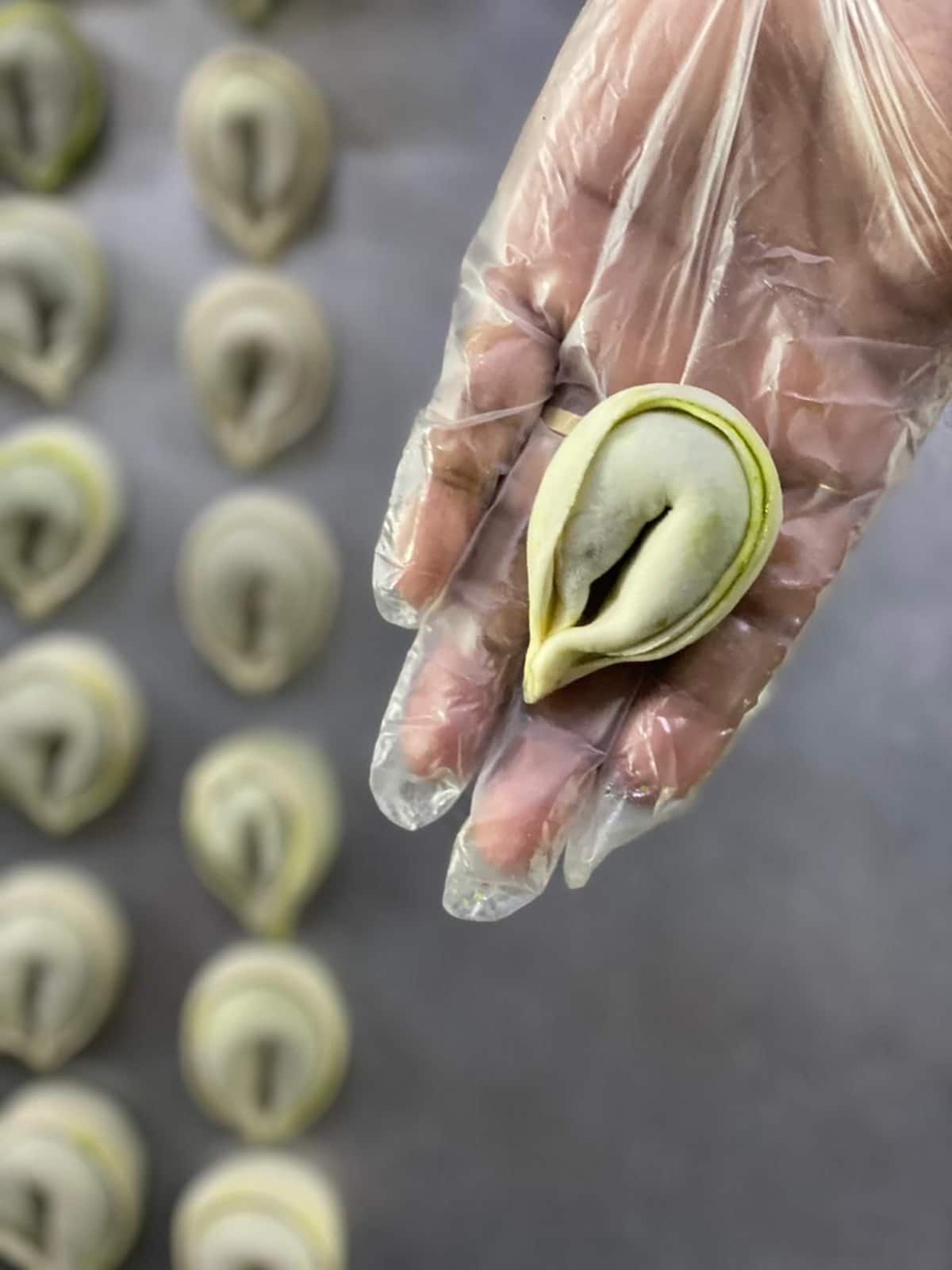 Most chefs agree that the eastern and coastal parts of the country had for centuries even gentrified the hunter-gatherer food, preparing delicacies with flower, fruit, peels and even the coarse stem of a banana tree. The banana leaves were universally used for steaming and making food parcels. Food researcher and development consultant Pritha Sen, who is using pop-ups to familiarize an urban audience with sustainable menu options, says affluence and progress have always been measured in terms of acquired knowledge and culture. “That’s why we have moved away from the food that is in our DNA and dismissed it as a poor man’s sustenance. Yet, nourished by rivers, streams, ponds and lakes, Bengal had, at one time, over 500 kinds of leafy greens. Every backyard would have a scaffold where they would grow vines, gourds and saags, incorporating even leaf tendrils in daily meals. Before we took to potatoes, we cooked yam, using them in curries or as paste and pickles, digging them out of the soil as delicately as we do mushrooms today. The peels, roots and stalks have birthed the chorchori, vegetables stir-fried in mustard oil, aromatic spices and simmered over time. The chechki, a semi-dry version with chillies and panch phoran (Bengal’s whole-spice blend) is all inclusive, even accommodating fish heads, skins and their innards for increased flavor and crunch,” she says.

At her food Pop-ups at five-star hotels, Gurugram-based Sen has served pumpkin and ash gourd belly fritters, using parts that are normally thrown away, bottle gourd fritters, batter-frying its stalk and parwal seed curry. She has been inspired by how the ridge gourd skin is scraped and ground to make a rich chutney in Uttar Pradesh. Sen has even spiced up the chana dal with duck and chicken skins, making it a complete meal in itself.

The root-to-shoot tradition exists in a much more robust manner in the Northeast, predominantly in Assam, which is closer to Thai cultural traditions. So, cooking interventions are minimal. “Bamboo shoots are fermented, dried or used in curries across the Northeast. But no Assamese food is complete without khar, which works like cooking soda and is obtained by filtering water through the ash of the burnt stem, core and skin of an indigenous banana variety called bhimkol. The residue is alkaline and balances out acidic food, tenderises meats and stalks of vegetables and enhances the flavors of a fish head cooked in mustard oil,” says Delhi-based home chef Snehalata Saikia, who hosts “Table for Six” pop-ups at her CR Park residence, offering guests an opportunity to sample food of the Northeast. Living alongside the Brahmaputra, the Ahoms have always preferred water-based vegetables, which they eat whole, mostly boiled, smoked, roasted, baked, fermented but rarely curried. “Stir-fried cooking in the region developed over the last century with colonisation. Otherwise, food has always been very localized and consumed in its entirety. We make a curry with the leaves of the jute plant and a monsoon delicacy with its slightly bitter shoots. Yam is central to Northeast cuisine. During Bihu in Assam, they say if you do not have yam paste with roasted sesame, potato, boiled rice and urad dal, you would be born a pig in your next birth. So, even a tuber is ritualised as a superfood. Wild elephant foot yam is baked in Meghalaya, Nagas make a dal with mashed yam in a watery gravy while Mizos flavor their rice congee with wild orange peels and aromatic leaves that smell like black pepper. The Manipuri salad singju is the perfect example of root-to-shoot eating as it tosses up shredded cabbage, raw papaya, lotus stem, garlic leaves, coriander leaves and stalks, onions, chilled lime and roasted wholeies. Once I made a sweetmeat like peethe using a whole beetroot and an elephant apple sauce. We talk of spa cuisine, farm-to-fork, sugar and fat substitutes and these have been around for centuries,” says Saikia.

We may like to be righteous about zero-waste and sustainability but if we want our bio-diverse tradition to continue into modernity, then it needs to be adapted to modern sensibilities. As Mumbai-based chef Thomas Zacharias, who is championing regional food through his storytelling platform, thelocavore.in, says, “We are missing out on nutrients and fiber by discarding skins and peels. Chefs need to look at reviving traditions as an opportunity rather than a challenge to make them look exotic. There’s always scope for interesting textures and flavors.” The 36-year-old’s stir-fried jackfruit seeds can make for a perfect bar snack. He has even made a refreshing drink with cascara, sun-dried remnants of the Arabica coffee pulpusually discarded after the coffee production process. 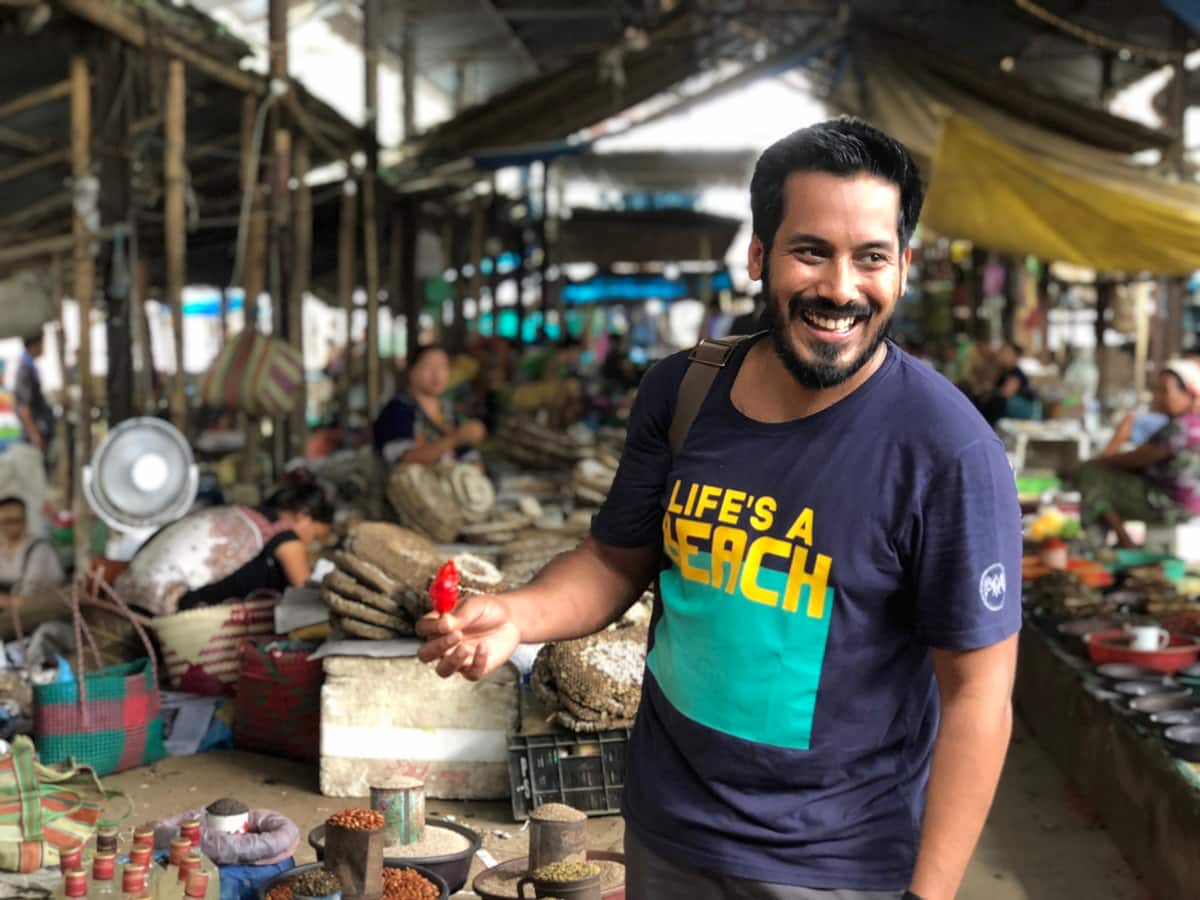 “Just simmer a cup of cascara with three cups of water, add two tablespoons of jaggery, reduce on medium heat for 15 minutes, strain and refrigerate. Then make a drink with tonic water, ice, lime and maybe even gin. About 40 lakh tons of cashew fruit are produced in the country every year but 98 per cent gets wasted. While cashew nuts are wanted by the world, the cashew apple is perfectly edible, can be fermented to make vinegar and even added to curries,” he says. He is popularising the shatavarim or Asparagus racemosus, preserving them in aromatic wild honey to make a murabba. While working at the Bombay Canteen restaurant until a year ago, he had brought about changes in the menu with his “manicured” food like the pumpkin-flower pakoda. He learned to use the cauliflower stem and leaf, both known to make a dense broth.

Khandelwal uses moringa leaves to make dumplings at her restaurant. “Taro root or colocasia, its stems and leaves have been used in curries while UP’s patode could give a typical roulade a run for its money. Root-to-shoot eating in everyday life could be as simple as swapping basil with moringa leaves or carrot greens in your pesto. Instead of slathering a jam on your toast, go for a homemade marmalade prepared with leftover peels of orange,” she says. At her outlet, she serves rat tail radish chutney, pea pod and noodles salad and pineapple tipache, the last a fermented mix of pineapple skins, jaggery, water, cinnamon and green chillies muddled in a jar, skimmed and then served chilled or in a cocktail. Even the mango seed and skin are used up as cocktail bitters at her bar!

No matter how innovative the chef is, the dish has to sell. And here lies the catch. Much of these efforts are self-funded and not scalable yet. While Pant advises a “root-to-shoot” syllabus in hospitality courses to mainstream zero-waste cooking, Sen wishes hotels were more aggressive about promotions. She recalls the time when she presented chhaal chorchori (fish skin, bhetki head and whole vegetables) as a surprise knowing that the hotel wouldn’t approve it because of its extreme unfamiliarity. “The guests were 80 per cent Punjabi and the dish flew,” says Sen.

Zacharias advocates a multifaceted approach. “Make the farmer an equal stakeholder, providing a guaranteed outlet through storytelling — maybe through farm tourism — build a collective movement. Locavore is already linking the farmer cooperatives to restaurants in Mumbai, encouraging the latter to include some wild foods in their menu. We are also tying up with food aggregators to include some of these outlets. In the end, make food accessible, fun and exciting, given short attention spans and 10-minute food deliveries,” he says. But till the beanstalk looks “cool” enough, sustainability will seem like a life lesson, not an aspiration.