India’s agricultural exports crossed $50 billion during the fiscal year ended March 31, 2022. While valued at $50.3 billion, no less interesting is imports, too, scaling an all-time-high of $32.4 billion.

Table 3 shows trends in the country’s farm goods trade over the last 10 years. The previous record for exports was $43.3 billion in 2013-14. That year, incidentally, also saw imports of only $15.5 billion, resulting in an agricultural trade surplus of $27.7 billion.

Chart 1 shows how closely linked India’s agricultural trade performance is to international commodities prices. The UN Food and Agriculture Organization’s (FAO) Food Price Index – having a base value of 100 for the 2014-16 period – averaged 122.5 points in 2012-13 and 119.1 in 2013-14. Those were the years when India’s farm exports reached $42-43 billion. The collapse of the index to 90 points in 2015-16 was accompanied by a plunge in exports to below $33 billion. The last two years, especially after October 2020, have witnessed a renewed boom in global agri-commodity prices, with the lifting of Covid-induced lockdowns and also the after-effects of the massive liquidity injections by central banks post the pandemic. The return of demand, reflected in the FAO index averaging 102.5 points in 2020-21 and 133 in 2021-22, has helped Indian agri exports rebound and go past $50 billion.

In general, high international prices – like during late-2010 to 2014 and, more recently, from October 2020 – are favorable for exports of farm produce. There’s an almost one-to-one relationship between the FAO index and India’s agricultural exports. High global prices also tend to benefit farmers, both by pushing up their realizations closer to export parity levels and by making imports more expensive. However, 2021-22 turned out different, recording a surge in exports as well as imports – which wasn’t the case in 2012-13 and 2013-14.

Tables 1 and 2 show India’s top agricultural export and import items having individual values ​​exceeding $1 billion in 2021-22, based on data from the Department of Commerce. 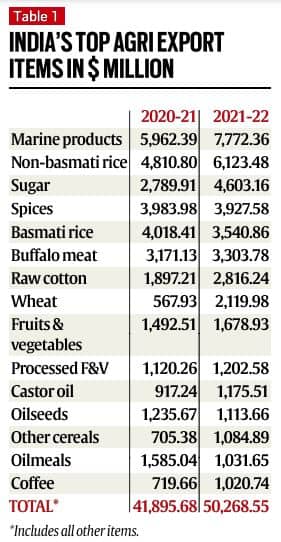 But the real increase has come from rice (specifically non-basmati), sugar and wheat, with their exports breaking all earlier records. 2021-22 was a remarkable year for rice and wheat.

Not only did the country ship out some 21 million tons (mt) of rice (17 mt non-basmati and 4 mt basmati) and 7.8 mt of wheat, offtake of the two cereals through the public distribution system, too, hit highest levels of 55.1 mt and 50.6 mt, respectively.

The fact that India achieved its highest ever exports and also domestic sales of subsidized/free grain is evidence of the bumper harvests produced by its farmers.

On the other hand, many of the items that contributed to the previous export boom have displayed stagnation, even posting declines, in the recent period.

As far as imports go, the spike in 2021-22 has been largely courtesy of vegetable oils. 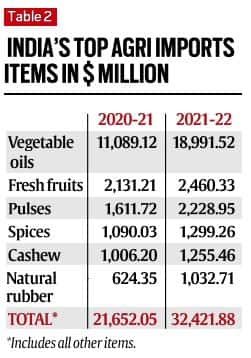 Pulses imports were at $2.2 billion in 2021-22, but down from the $4.2 billion high of 2016-17. Other big-ticket import items were fresh fruits (mainly almonds and apples), cashew (basically raw nuts for re-export after processing), spices and natural rubber.

Exports mostly comprise chilli, mint products and cumin. On the other hand, there has been a rising trend in imports of pepper, cardamom and other traditional plantation spices from countries such as Vietnam, Sri Lanka and Indonesia.

The Russian invasion of Ukraine has imparted further bullishness to agri-commodity markets, with the FAO food price index leaping to a fresh high of 159.3 points in March. That, going by past experience, should bode well for India’s farm exports. There are expectations of the country’s wheat and even maize exporters filling, at least partly, the void left by the two warring breadbasket nations.

Optimism on that front has somewhat ebbed, though, following the severe heat wave engulfing much of India from mid-March. Reports from the ground suggest significant yield losses, particularly for the wheat crop that was at the critical grain-filling stage when temperatures suddenly spiked. With government procurement set to more than halve from last year’s 43.3 mt, the projections of wheat exports topping 10 mt may not easily materialize. The overall prospects for agri-exports hinge largely on the monsoon. Even with regard to 2021-22’s star performers, rice and wheat, public granaries clearly aren’t overflowing like during the pandemic period.

Meanwhile, there’s little respite in sight on the biggest agri-import item: Edible oils. The war in Ukraine has dealt a body blow to the sunflower oil trade. That, coupled with drought in South America’s soyabean-growing area and Indonesia’s ban on palm oil exports, is likely to keep global prices elevated for some time. And it isn’t edible oils alone. In 2021-22, the country even imported $610 million worth of oil meals, a commodity that it used to heavily export till recently.

All in all, 2022-23 could be more challenging for Indian agricultural trade, notwithstanding high international prices that are normally favorable for exports while keeping imports in check. If the Reserve Bank of India’s latest actions and hawkish commentary on food inflation are any indication, the policy push for exports may also not be as intense.