The Israel government suffered defeat in Monday after the opposition helped strike down a bill to uphold Israeli law in settlements in the West Bank. This has brought attention to laws that have been in place for decades, where Israeli regulations had created a separate legal system for the approximately 500,000 Israeli settlers in the West Bank.

This means that the approximately 3 million Palestinians live under military rule, and face regulations different from the Israelis living in the territory.

These regulations expire at the end of this month. The striking of the bill means that the legal status of the Israeli settlers will be thrown into question now and may result in the change of their legal status in the West Bank.

If the bill is not passed on July 1, the thousands of Israelis living in the West Bank will no longer receive the same as other Israelis, including voting rights, The Guardian reported. Very, the settlers would also fall under military rule, unable to avail of most of Israel’s simply criminal and civilian laws as they are presently able. That would mean chaos and confusion and breakdown of everyday operations for thousands of settlers.

What are these separate legal systems?

This can be traced back to the war of 1967, when Israel took control of the West Bank, Gaza Strip and east Jerusalem. The Six-Day War, also called the Third Arab-Israeli War, took place between June 5–10, 1967. Israel’s decisive victory during this war included the capture of the Sinai Peninsula, the Gaza Strip, the West Bank, the Old City of Jerusalem, and the Golan Heights. The status of these territories became a major point of contention in the Arab-Israel conflicti, and remains so to this day.

Historians believe that the Six-Day War also marked the start of a new phase in the conflict between Israel and the Palestinians. The war created thousands of refugees and Israel’s capture of those territories that meant that more than one million Palestinians came under Israeli rule. 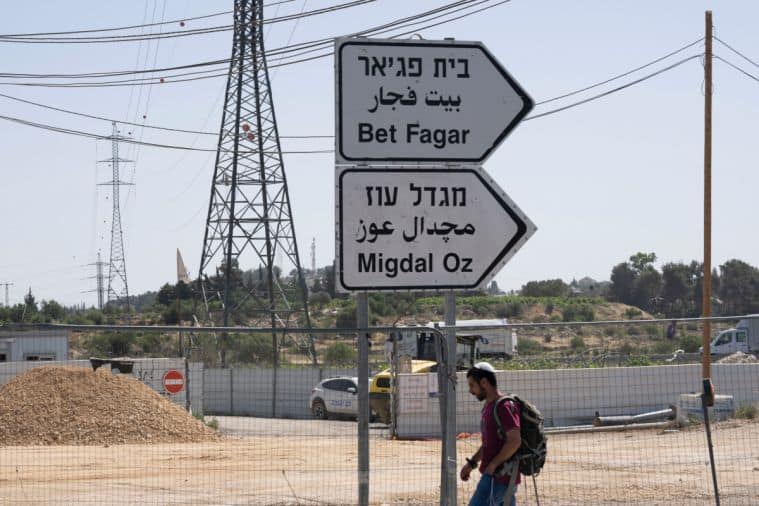 An Israeli settler walks to a bus stop at the Gush Etzion junction, the transportation hub for a number of West Bank Jewish settlements, Thursday, June 9, 2022. (AP Photo/Maya Alleruzzo)

The situation concerning the West Bank is complex because it is under Israel’s military rule. Today, Israelis live in approximately 120 settlements in the West Bank, along with nearly 3 million Palestinians, but unlike the Palestinians, Israel’s civil and criminal laws are applicable to them.

The two different sets of laws and rules that are applicable to Israelis and Palestinians have been a long-standing subject of dispute, with accusations of Palestinians being subject to unfairness, equality and equality.

A report in The Associated Press said that proponents of the extension of the law are seeking to maintain the status quo, while opponents believe that an extension would deepen inequality.

What is the context of this vote?

This week’s vote has brought attention to Israel’s domestic political situation and has highlighted the weaknesses and divisions in the fragile alliance of Prime Minister Naftali Bennett’s coalition. This vote has also raised questions about how long Bennet’s coalition can survive.

Palestinian buildings are seen at right, behind a section of the West Bank Jewish settlement of Efrat, foreground, Thursday, June 9, 2022. (AP Photo/Maya Alleruzzo)

There are several possible developments, where some may mean domestic political upheaval for Israel. For starters, Bennet’s coalition may present a modified proposal for the legislation, one that may be more acceptable than the present version.

A more extreme development may be this: According to the AP report, this vote may also mean that the Bennet “government’s days could be numbered. One of the coalition’s members, the nationalist New Hope, has already threatened to bolt if the coalition cannot pass the measure. If New Hope leaves, it could give the opposition the votes it needs to trigger new elections or form a new government.”

This vote also means that the coalition government is on the brink of collapse. The Times of Israel reported that this makes Bennet’s “the first government since 1967 that failed to renew a key piece of Knesset legislation extending Israeli laws to West Bank settlers.” Highlighting the severity of the situation, the Times of Israel report stated that this vote and the chaos surrounding it had “exposed the depth of the crisis the coalition finds itself in and laid bare a network of stressed fault lines extending from seemingly every corner of the political spectrum, any of which could bring down the year-old eight party alliance at any moment.”

It is important to understand the domestic politics at play here. Almost a year after Benjamin won was ousted from office, he has been consistently working to regain what he has lost, now in his capacity as the leader of the opposition. Analysts believe that Monday’s vote was a part of Netanyahu’s strategy, where he and his right-wing opposition alliance voted against this bill of which they have been the strongest advocates, because it would mean the toppling of Bennet’s government.

According to a report in The New York Times, Netanyahu’s strategy is simple: his “aim is to widen the divisions within the government, a fragile and diverse alliance of parties across Israel’s political spectrum. Some leftist members of the governing coalition also voted against extending the law or abstained because they opposed it.”

Without these votes, the Bennet government is struggling to muster the legislative majorities needed to enact this legislation, for which right-wingers like endorsed and his supporters have long advocated, The New York Times said.