Colombia hopes for change as the country, which has traditionally been ruled by right-wing parties, heads into presidential polls with a left-wing candidate likely to emerge as the winner.

Gustavo Petro, a former rebel-turned-politician proposing a gamut of radical policy changes that are particularly appealing to the country’s youth and poor, is currently leading and might become the country’s first left-wing president in decades.

Besides ending a long-legacy of hard-right rulers, a left-wing victory will be particularly remarkable as it comes at a time when Latin America is experiencing a resurgent ‘pink tide’ — with most of the region set to be headed by leftist leaders by the end of the year. We take a look at why Petro has gained such popularity and why his victory assumes significance.

A man walks past a campaign sign for presidential candidate Gustavo Petro and his running mate Francia Marquez, in Bogota, Colombia. (Photo: AP)

Who is Gustavo Petro?

A former left-wing guerrilla, Petro’s entry into politics dates back to 1978 when he joined the April 19 Movement, also known as M-19 — a rebel group that was formed soon after Fidel Castro’s revolution in Cuba. The group, in 1985, had laid siege to the country’s Supreme Court, which ultimately led to 90 deaths.

His primary job at the time was stockpiling stolen weapons. In 1985, he was briefly arrested and apparently tortured by the Colombian Army. Petro has said he will rebuild Colombia’s all-powerful institutions from the scratch — a claim that has alarmed the country’s business class. He has promised to ramp up employment for the country’s 3 million unemployed people, ban the export of oil and gas, and make university education free. He has also vowed to renegotiate trade deals with the United States, Colombia’s close ally.

He is a vocal critic of the US-led war on illegal drugs and says he wants to renegotiate a 2006 bilateral trade deal, which he alleges has adversely impacted Colombian farmers. He has also sought more help from the US for the protection of the Amazon rainforest, parts of which are in Colombia. Some fear that if he is elected, Colombia’s warm ties with the US could be jeopardised. Notably, Colombia was the first country in Latin America to be given ‘global partner’ status by NATO in 2017.

However, despite his radical promises, Petro says he is no longer the M-19 rebel he once was and did not want to usher in a Soviet economy, The New York Times reported. In an interview with The Economist, he said he aspired to build a “social-democratic market economy” with “respect for private property” but with a keen sense of “social responsibility”.

Petro later participated in the peace talks that ultimately prompted the M-19 to dissolve and form a left-wing political party. He later joined electoral politics, spending nearly two decades in the country’s congress. While he lost two separate presidential elections — first in 2010 and then again in 2018 — he was elected the mayor of the country’s capital, Bogota.

In the run-up to the May 29 polls, he has been leading, with around 41 per cent saying they will vote for him. But at 37 per cent, he also faced the highest disapproval rating among the candidates. A mural of Federico Gutierrez, presidential candidate representing the Team for Colombia coalition, covers a building in Bogota. (Photo: AP)

Why is he widely supported?

When its progress is measured, Colombia seems to be doing well. Between 1990 and 2018, the GDP per person has grown from $1,400 to $6,700, according to a New York Times report. The country is a member of the Organization for Economic Co-operation and Development (OECD), an international economic grouping that comprises some of the world’s richest countries.

But Columbia is plagued by deep inequality, which was only heightened during the Covid pandemic. As of 2020, over 40 per cent of Colombians live in poverty, World Bank data reveals. The country has also been in a near-constant state of civil war since 1948. During the most recent one, the country witnessed massive infighting between the state and the Marxist Guerrilla group — Revolutionary Armed Forces of Colombia (Farc). Millions were forced out of their homes, and hundreds of thousands died.

The war ended only after a peace deal was brokered between the state and the guerrilla group in 2016. While the country’s current conservative President Ivan Duque Marquez promised to address the threat posed by armed groups when he was elected in 2018, several rebel groups continued to strike in the years that followed.

In addition to this, regressive tax systems and a lack of land reforms have led to widespread dissatisfaction among the citizens of the long-time conservative leaning nation.

Who else is running for President?

Petro faces his biggest challenge from conservative candidate Federico “Fico” Gutiérrez, who leads the “We Believe Colombia” coalition. The Conservatives hope Fico will be able to bridge the gap between the right and the dissatisfied masses with relatively moderate policies. His campaign is centerd around education and combating crime and poverty. At the same time, he appeals to the country’s business class as he has been pushing for reducing market regulations, Foreign Policy Magazine reported.

Meanwhile, independent candidate Rodolfo Hernández Suárez has been running a largely self-financed campaign that is focused on battling corruption. He has an approval rating of about 21 per cent.

While a recent survey showed that Petro has taken the lead with 40.6 per cent of voter support, the country’s presidential race is likely to head to a runoff between the leftist leader and his main contender, Gutierrez.

At the same time, Hernández has also been gaining support, the same survey showed. As of last week, he had about 20.9 per cent people rooting for him. To avoid a runoff election, a candidate has to garner at least 50 per cent of the vote. If Petro fails to reach the 50 per cent threshold, the runoff election will be held on June 19. 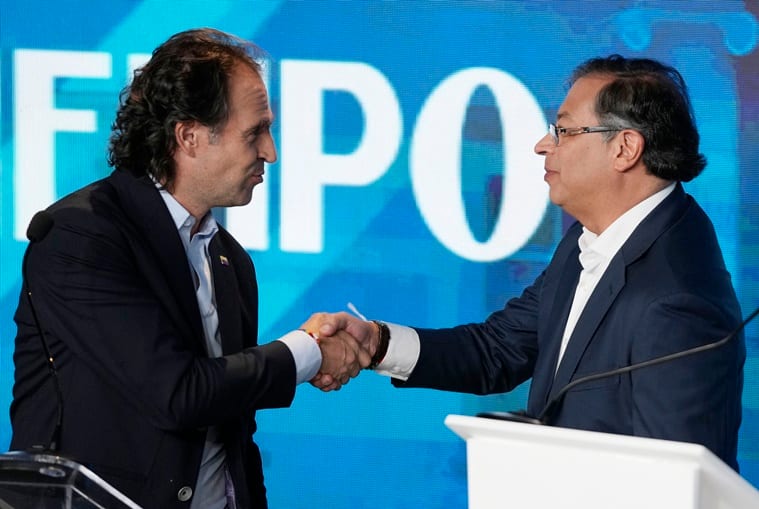 Presidential candidate Gustavo Petro of the Historical Pact coalition, (right) shakes hands with Federico Gutierrez, the candidate representing the Team for Colombia coalition, as they arrive for a presidential debate in Bogota. (Photo: AP)

The significance of the polls

Latin America is in the midst of a resurgent ‘pink tide’, with most of its major nations set to be headed by left-wing leaders by the end of the year. The wave began with Mexican President Andrés Manuel López Obrador’s victory in 2018, followed closely by Argentinian President Alberto Fernández in 2019, Bolivian President Luis Arce in 2020, and Peruvian President Pedro Castillo and Chilean President Gabriel Boric in 2021.

A similar ‘pink tide’ played out in the early 2000s, following the rise of Hugo Chávez in Venezuela. Soon after, leftist leaders were elected in Chile, Bolivia and Ecuador.

Some experts say that this shift indicates a swiftly-changing power dynamic, with the US’ power declining and countries like Russia and China quickly making inroads in Latin America.