Maruti Suzuki, India’s top carmaker, wants the government to review a proposal to make six mandatory airbags in passenger vehicles, citing its impact on the price-sensitive entry-level car segment, which has been facing a slide in sales over the last four years , and where the Japanese car major has a significant market presence.

The reiteration of this demand by Maruti Suzuki Chairman RC Bhargava comes days after the country’s second largest carmaker Hyundai Motor decided to pull the plug on its new Santro in the wake of declining sales and the new safety norms that are likely to come into effect later this year. The changes required to reconfigure the hatchback with six airbags was seen as an unviable proposition.

What are the new safety norms?

On January 14 this year, Road Transport and Highways Minister Nitin Gadkari tweeted: “In order to enhance the safety of the occupants in motor vehicles carrying upto 8 passengers, I have now approved a Draft GSR Notification to make a minimum of 6 Airbags compulsory.”

No timelines were mentioned then, but Gadkari had in August last year urged all automakers in India to offer at least six airbags as standard equipment on all variants of all models. Dual airbags (driver and passenger) became mandatory on all vehicles this January. A driver airbag has been compulsory for all passenger vehicles since July 1, 2019.

What type of vehicles are covered by the proposed mandate on six airbags?

Additional airbags are proposed in the ‘M1’ category of vehicles, with the aim of minimising the impact of “frontal and lateral collisions” to the occupants of both the front and rear compartments. As per the proposal, two side or side torso airbags, and two side curtain or tube airbags covering all outboard passengers, will be made mandatory. 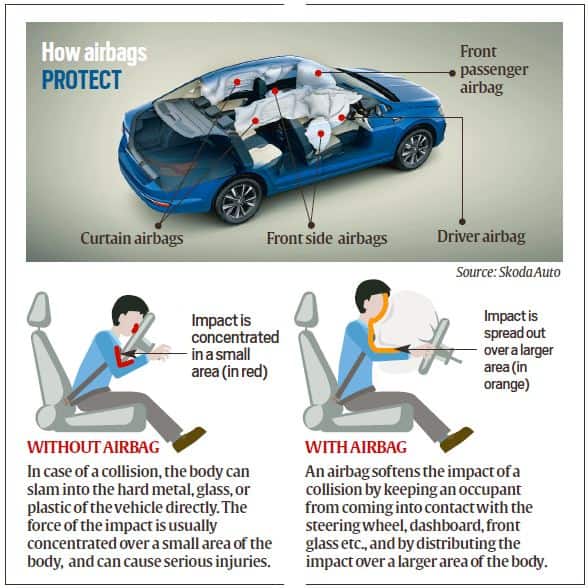 How do airbags protect

Under the government’s homologation rules, vehicles are bucketed into broad categories. ‘Category M’ covers motor vehicles with at least four wheels, used for carrying passengers. Sub-category ‘M1’ defines “a motor vehicle used for the carriage of passengers, comprising not more than eight seats in addition to the driver’s seat”.

This category effectively subsumes the bulk of the passenger vehicles on India’s roads — from entry-level hatchbacks such as the Suzuki Alto or Hyundai Santro to multi-utility vehicles such as the Toyota Innova or Kia Carnival. These vehicles are employed mostly for private use, alongside some commercial use by fleet operators.

What exactly is homologation?

Homologation is the process of certifying that a particular vehicle is roadworthy, and matches certain specified criteria laid down by the government for all vehicles that are built or imported into the country. Tests are done to ensure the vehicle matches the requirements of the Indian market in terms of emissions, and safety and roadworthiness, as laid down by the Central Motor Vehicle Rules.

But why do vehicles need more airbags?

Airbags soften the impact of collisions by keeping occupants from coming into contact with the steering wheel, dashboard, front glass, and other parts of the automobile.

Airbags are literally a question of life and death: the US government agency National Highway Traffic Safety Administration (NHTSA) estimated that from 1987 to 2017, just frontal airbags saved 50,457 lives in that country.

India’s record on road security is among the poorest in the world, and Indian cars are famously behind the curve when it comes to offering safety features. This is especially glaring when comparisons are made with models offered by manufacturers in other global markets, including those made by carmakers operating in India.

Companies that sell the same car model in global markets choose to cut down on some key security features when they launch in India’s price-sensitive market.

What could be the challenges in implementing the proposed mandate?

Pricing will be a key challenge: more airbags as standard equipment will inevitably drive up the cost of vehicles, including those on the budget end of the market.

A frontal airbag in an entry-level car typically costs between Rs 5,000 and Rs 10,000, and side and curtain airbags could cost more than double that. Most carmakers in India that offer six airbags only do so in top-end models, and in variants that cost upwards of Rs 10 lakh.

Manufacturers have also flagged that a number of entry-level models are specifically designed for markets such as India, and that installing additional airbags will involve significant re-engineering, including making modifications to the body shell and the inside compartment. This was seen as a deterrent in the Santro’s case.

Then there is the timing. India’s auto industry is currently transitioning to stricter BS6 emission norms, and implementing the new Corporate Average Fuel Economy or CAFE norms, both of which have cost implications.

So what is the car manufacturers’ argument here?

Manufacturers argue that consumers get what they pay for, and very few buyers in the budget category want to shell out more for a safer car.

When Maruti Suzuki drew up the preferences of Indian car buyers — tabulated over time from enquiries made at the point of purchase — it found safety features such as ABS (anti-lock brake system) and airbags came in at eighth position, far behind bells and whistles such as air conditioning, power windows, and central locking.

Executives at the company say that driver-seat airbags were offered in the top variant of the Wagon-R, but the model had to be withdrawn due to the lack of interest among consumers.

And what is the counter-argument?

Safety experts say that safety features such as twin airbags, ABS and rear wipers would only add up to Rs 25,000 to the cost of the car. It is only because they are not mandatory that manufacturers provide these features only in top-end versions of cars, and bundle them with other features, thereby making the vehicle costlier by about Rs 1.20 lakh or more.

In effect, this deprives Indian car buyers of variants that have these essential safety features.

What are the rules on airbags elsewhere in the world?

In the United States, front airbags are required by law in all cars. But most carmakers offer between six and 10 airbags, depending on the model, primarily to score higher in crash test results from agencies like the NHTSA and the private nonprofit insurance Institute for Highway Safety (IIHS). No vehicle without head-protecting side airbags has ever earned a top rating in the IIHS’s side crash test.

The US government amended its Federal Motor Vehicle Safety Standard 208 (FMVSS 208) back in 1984 to require cars produced after April 1, 1989 to be equipped with a passive restraint for the driver, with an airbag or a seat belt meeting the requirements of the standard.

Airbag introduction was stimulated by the NHTSA, and was made mandatory for passenger vehicles and light trucks in 1997.

In 1998, FMVSS 208 was amended to require dual front airbags and, later, second-generation airbags were mandated.

Some countries outside North America adhere to internationalized European ECE vehicle and equipment regulations instead of US standards. ECE airbags are generally smaller and inflate less forcefully than the airbags that are offered in the US, because the ECE specifications are based on belted crash test dummies.

Almost every new car sold in Europe is equipped with front and side airbags. In the EU and in the United Kingdom, there is no direct legal requirement for new cars to feature airbags. But again, most variants are equipped with at least 4-6 airbags, primarily to comply with crash test norms, and to score higher on the safety count.