ExplainSpeaking-Economy is a weekly newsletter by Udit Misra, delivered in your inbox every Monday morning. Click here to subscribe

On August 31, the Ministry of Statistics and Program Implementation (MoSPI) will release the so-called “Provisional Estimates (or PEs)” of GDP for the last financial year (2021-22).

Before we get to what PEs are, here is a quick definition of GDP.

The GDP measures the monetary value of all “final” goods and services—that is, those that are bought by the final user—produced in a country in a given period of time (say a quarter or a year). For more on GDP, read this piece.

What are Provisional Estimates and what is their significance?

The provisional estimates are important because they will be the first formal estimates of how India grew in the full financial year 2021-22.

In the past, MoSPI has released two “advance” estimates of GDP.

The first advance estimates (FAEs) were released on January 7th and they expected India’s GDP to grow by 9.2% in 2021-22. Of course, coming as they did on January 7th, the FAEs were largely based on the data from just the first two quarters — April to June and July to September. Read this piece to learn more about the FAEs.

Next, in end-February, the MoSPI updated the FAEs by adding data for the third quarter (October to December). These were labeled as the second advance estimates (SAEs). The SAEs dialed down the full-year growth to 8.9%. Read this piece to understand what the SAEs told us about the economy.

The provisional estimates (or PEs) that will be released on August 31 will go a step further. They will add the data from the fourth quarter (January to March) and thus provide the most complete picture of how India’s economy performed in 2021-22.

To be sure, thanks to the Covid disruption, India’s economy had contracted by 6.6% in 2020-21. As such, the GDP growth in 2021-22 will tell us the extent of India’s economic recovery. A good way to do this is to compare every metric to where it was in 2019-20 since that is the pre-Covid level.

Apart from telling us how robust was India’s recovery, the provisional estimates will also set the base on which the current financial year’s GDP growth will be calculated.

What to look for in provisional estimates?

While both the variables measure national income, they are linked as follows: 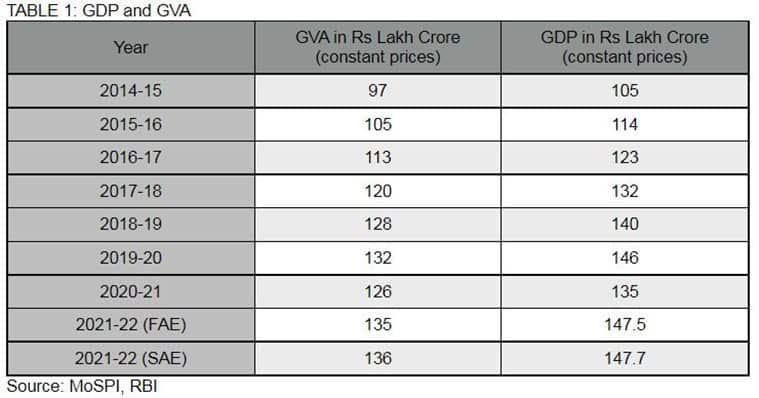 Table 1 details the GDP and GVA levels since 2014. The key year to compare FY22 is FY20, which is the pre-Covid year.

While the overall GDP level is important to know where the economy is vis-a-vis the pre-Covid, it is important to note for people to know what is causing growth and what is dragging India’s growth. This is where the sub-components of GDP come into the picture.

Knowledge about them helps us understand how sustainable India’s economic recovery is.

Broadly speaking, GDP has four engines of growth in any economy.

In India’s case, for instance, the biggest engine is private consumption (C) demand from individuals. This demand typically accounts for 56% of all GDP and is technically called the “Private Final Consumption Expenditure” or PFCE.

The second-biggest engine is the money spent on investments (I). This accounts for 32% of all GDP in India; and is technically called Gross Fixed Capital Formation or GFCF.

The third engine of GDP growth is the money spent by the government G) towards meeting its day-to-day arrangements. This demand accounts for 11% of India’s GDP, and is called “Government Final Consumption Expenditure (GFCE)”.

Table 2 details the different components of GDP and how they contributed to the overall GDP. Readers will note that there were dramatic differences in the sub-components between the FAEs and SAEs.

Per capita income and expenditure

Often, overall GDP does not tell us the full picture.

To get a better understanding of how an average Indian is affected, the GDP datasheet also looks at per capita income (or pc GDP) and per capita expenditure (or per capita PFCE).

Table 3 details of the situation in these two variables. Table 3: While the overall level of GDP and expenditure may have crossed the 2019-20 level, in per capita terms India continues to struggle

The key thing to note is that while the overall level of GDP and expenditure may have crossed the 2019-20 level (Table 1), in per capita terms India continues to struggle.

The provisional estimates include the first official estimates for GVA for the fourth quarter as well as the whole financial year. The sub-components of GVA tell us which sectors of the economy are doing well and which ones are struggling to grow.

Table 4 shows the break up of the economy into eight productive sectors and the GVA in each of them. Table 4: Break up of the economy into 8 productive sectors

The way to read this table is to again compare the amount of value-added in a particular sector (say manufacturing) in 2021-22 and then compare it with the 2019-20 (pre-Covid) level. This set of data is based on the SAEs. But the provisional estimates will update all these data points.