Tosca Musk is not particularly interested in space tourism or electric car manufacturing. She is not a rabble-rouser on Twitter who is now buying Twitter. She is not rolling in money, at least not World’s Richest Person money.

But she is similar to Elon Musk, her eldest sibling, in at least one way: She is determined to turn an easily ridiculed idea into a successful business, and prophets of doom are darned.

“We’re looking to raise another five, possibly 10,” Musk said. “You know anybody?”

In addition to adaptations — the vast majority directed by Musk, who is the company’s CEO — Passionflix stocks a revolving array of licensed material. Such offerings have included “Random Encounters,” a 2013 movie starring the Duchess of Sussex, then known as Meghan Markle, and “Two Night Stand,” a 2014 romantic comedy starring Miles Teller. Studio films like “Sabrina” and “The English Patient,” both from the 1990s, have also been available.

Passionflix is ​​sort of a sexy Hallmark Channel. The stories are simple, and the acting is sometimes unrefined. Passionflix dialogue is usually taken directly from the source material, which can be majestically cheesy. “I’ve missed making love with you,” a shirtless hunk whispers huskily in “Gabriel’s Rapture,” a Passionflix series based on Sylvain Reynard’s bestselling novel. “It was as if one of my limbs was missing.”

But please do not call Passionflix a guilty pleasure. “I hate that description,” Musk said in her matter-of-fact way. “It’s simply pleasure.” And get your heads out of the gutter: Naughtiness barometer aside, Passionflix content rarely if ever approaches the soft-core threshold. There are sex scenes, certainly, but the carnality is often on simmer — a sultry glance here, a thigh graze there. Musk enforces a rule of no frontal nudity below the waist.

“Most of the time, people look down at romance — there is apparently something radical in having female desire as the main theme — and they don’t think that romance is intellectual enough,” Musk said.

“I think that is wrong. Romance is about validating emotions. It’s about removing shame from sexuality.

“Nothing we do is about being a victim or women in jeopardy or the domestication of women,” she continued. “Whether second-chance romance or Cinderella story, at the end of the day, it’s two people who connect, communicate and compromise.” 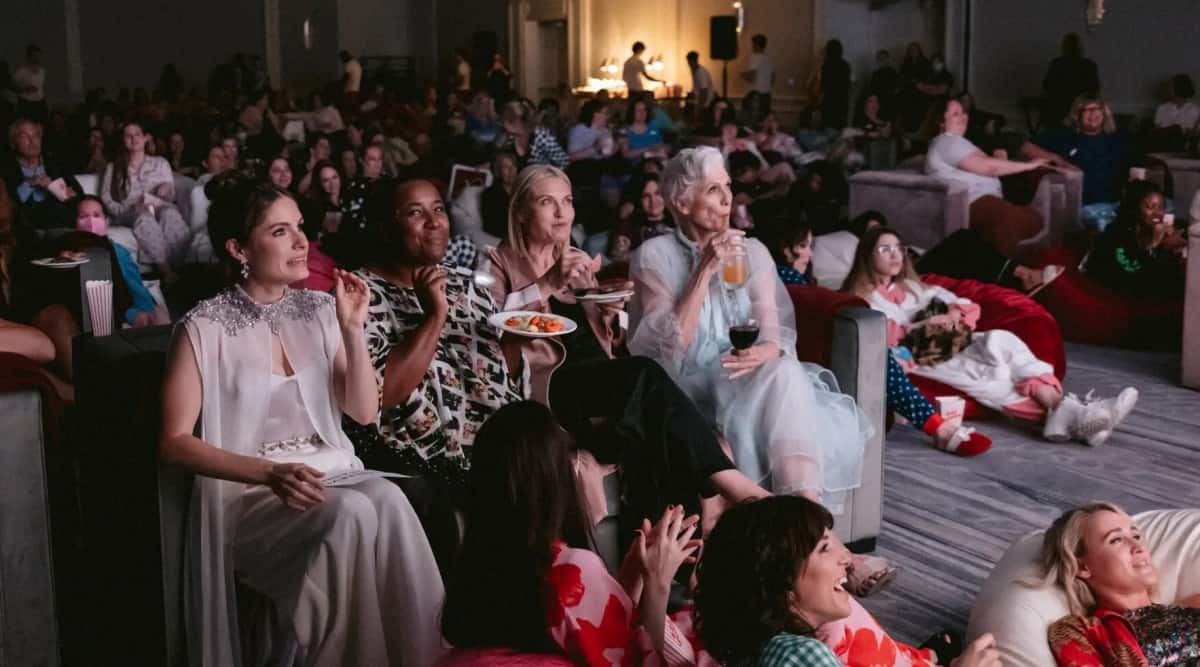 Ms. Musk and her mother, Maye Musk, watching a Passionflix show at PassionCon, which was held at the Ritz-Carlton, Marina del Rey. (NYT)

Passionflix was rolled out in September 2017 and is now available in 150 countries; content is subtitled in nine languages. But the going has been slow. Passionflix has only six employees. The pandemic brought production to a standstill for a time. The number of subscribers is a mystery, with Musk declining to provide specific data and analysts saying the service is still too tiny to track. (Subscriptions grew 73% in 2021 from a year earlier, a Passionflix spokesperson said.)

Moreover, the streaming gold rush is slowing down. At the very least, it is becoming harder to navigate.

“Niche services are often at the mercy of aggregators such as smart TVs, streaming boxes or online platforms,” Sappington continued. “They have little negotiating power for revenue sharing; they are often last in line for developer support; and they often can’t afford to have the prime, front-page spots on websites or app stores.”

More than 300 streaming services are available in the United States, according to Parks Associates, a consulting firm. The eight largest accounted for an estimated 88% of original content demand from January through March, according to Parrot Analytics. Niche services fought for the balance — outfits like Revry, for the LGBTQ community; Bloody Disgusting, focused on horror fans; kweliTV, dedicated to Black culture; and little Passionflix.

But Musk is not about to give up.

Elon Musk, of course, is the founder of SpaceX, CEO of Tesla and the planet’s wealthiest person; he struck a $44 billion deal in April to buy Twitter. Tosca Musk’s other older brother, Kimbal Musk, is a restaurant entrepreneur and farm-to-table food activist who sits on the boards of SpaceX and Tesla.

Their force-of-nature mother, Maye Musk, is a model who recently published the memoir “A Woman Makes a Plan.” (For a time, Maye Musk ran the Passionflix Instagram account.)

Tosca Musk described the typical Passionflix subscriber as “voraciously engaged” with the site, and that may be an understatement if Jan Edwards is any indication. Widowed in 2015 and retired from her human resources job in January, Edwards, 65, lives in Tuckerton, New Jersey, and has been a Passionflix subscriber since 2018. “I’m just putting laundry in the dryer — it’s an exciting day over here , let me tell you — so it’s a fine time to talk,” she said when a reporter phoned.

Why does she subscribe? “Oh, that’s easy,” she said. “Most of the time, I am overlooked by the rest of the media.”

Edwards said she had become hooked on romantic fiction in 2009 when a friend “bullied” her into reading the sadomasochistic love story “Fifty Shades of Gray.” It was the bookworm equivalent of a gateway drug: Edwards now reads up to three romance novels a week.

“People look down their noses at romance, but it makes me feel good — and a lot of women agree, although they usually keep it a little quiet,” she said.

It is not just women: Romance Writers of America, a trade organization, estimates that 18% of romance readers are male. Thousands of new romance titles appear annually. About 48 million copies were sold in 2021, including e-books, a 10% increase from the previous year, according to NPD BookScan.

Early financial backers for Passionflix included television producer Norman Lear and his wife, Lyn, who is also a producer; Jason Calacanis, an internet entrepreneur and angel investor; and Kimbal Musk.
And Elon Musk?

“It is difficult for me to answer that question,” Tosca Musk said. “If I say that he is an investor, then everybody says, ‘Oh, she just got her brother to pay for it.’ And if I say he didn’t invest, then you all say, ‘He doesn’t support her.’”

Elon Musk did not respond to inquiries.

First Look Media is the biggest Passionflix investor, although that company’s CEO, Michael Bloom, declined to disclose the size of its stake. (Tosca Musk remains Passionflix’s majority owner.) First Look, founded by Pierre Omidyar, the eBay billionaire, is made up of several unconnected entities. There is a nonprofit arm focused on investigative journalism and documentary filmmaking. An entertainment studio, Topic, specializes in prestige films like “Spencer,” “Spotlight” and “Mauritanian.” A new relative division houses niche streaming services, including Topic.com, which focuses on crime, and Passionflix. 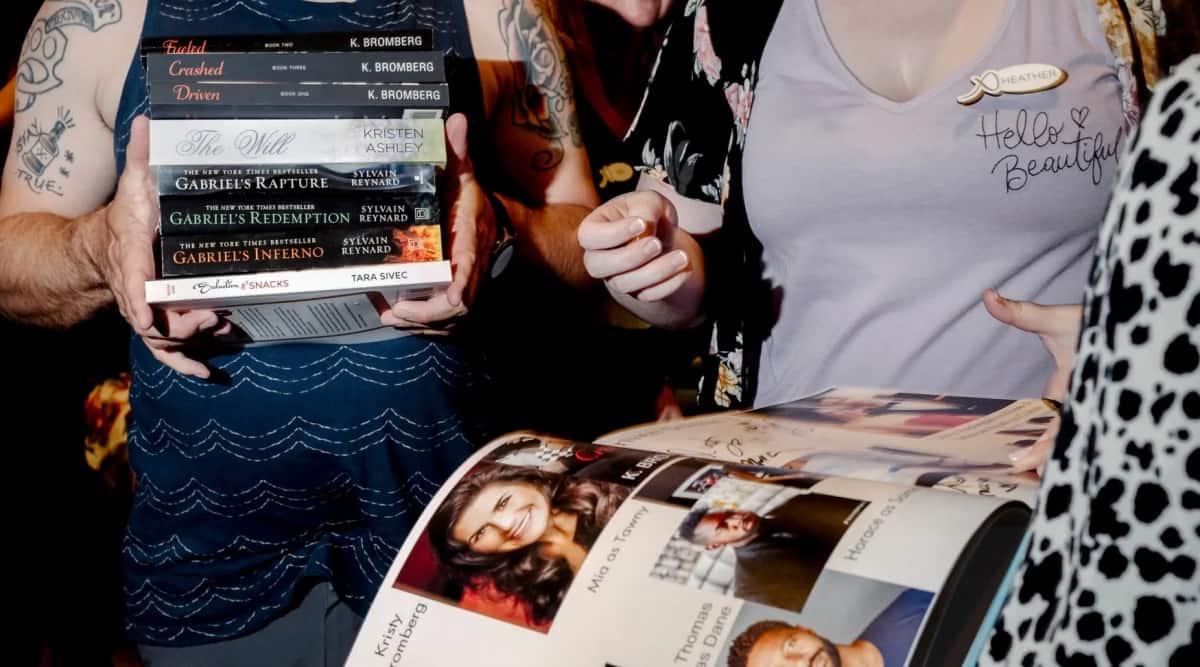 PassionCon fans at a book signing. About 48 million romance novels were sold in 2021. (NYT)

“We fully understand that we’re walking at the feet of elephants,” Bloom said, referring to all-audience streaming services like HBO Max and Netflix. “But we’re not trying to be them. There is an opportunity for speciality services like Passionflix to super-serve a particular audience in a way that the big, mainstream retail guys don’t do.”

Romantic escapism used to be a television staple. It was powered by the miniseries (“The Thorn Birds,” “Hollywood Wives”) in the 1980s and the movie-of-the-week in the 1990s (all of those moaning Danielle Steel adaptations). But networks abandoned those formats in the 2000s. The cost was one reason; networks also began to favor repeatable crime procedurals and reality shows, including the romance-driven “Bachelor” franchise.

Over the last decade, only a smattering of romance novel adaptations has made it to television. Even fewer (“Outlander” on Starz, “Bridgerton” on Netflix) have been hit.

Passionflix was not conceived as a cynical way to cash in on the streaming boom, Musk said. Rather, she and two friends, Jina Panebianco and Joany Kane wanted to make spicy romance television and could not find buyers in Hollywood.

“So we had to create a distribution solution,” Musk said.

Musk, named after Puccini’s opera, studied film at the University of British Columbia in Vancouver. After graduating in 1997, she worked for Alliance, a Canadian production company, before moving to Los Angeles, where she directed, wrote and produced a movie, “Puzzled” (2001), with backing from Elon Musk. She ultimately began producing and directing TV movies for Hallmark, Lifetime and ION Television.

But she was frustrated. “I kept getting into conflicts with network executives, who were not interested in stories about empowered women embracing their sexuality.”

Musk speaks at a breakneck pace and with an accent that reflects his time lived in Canada, the United States and South Africa, where she grew up. She is tall, energetic and frank. At the start of an interview at the Ritz-Carlton, Marina del Rey, near Los Angeles International Airport last month, she announced that her daughter, Isabeau, 9, was in an adjoining room playing a video game and that she had conceived her and her twin brother, Grayson, through an anonymous sperm donor and in vitro fertilization.

Musk moved to Georgia during the pandemic to take advantage of the state’s generous tax credits for movie and television production. But she had taken over much of the Ritz-Carlton for an inaugural Passionflix fan convention: PassionCon. Packages for two cost $1,000 and included lodging for two nights, meals, alcohol, a hair and makeup session, panels with Passionflix stars and a pajama party for the third-season premiere of “Driven,” about a kindhearted woman who falls for a bad -boy race car driver. About 200 people attended, Musk said, some from as far away as Australia and Germany. (Yes, she wore pajamas.)

“It was like a dream,” said Edwards, who flew in from New Jersey. “This community really means something to me.”

Finding ways to extend Passionflix’s business beyond the screen is a new effort for Musk. She also used PassionCon to introduce Passionflix-branded wine. Bottles cost $35 and carry a slogan: “Toe Curling Yumminess.”