When Queen Victoria celebrated her diamond jubilee in 1897, it marked the apex of British power on the world stage. Six decades since she had ascended the throne, Victoria, then half-blind and generally infirm, was at the top of an imperial chain that wound its way across every continent, binding together a quarter of the globe under the suzerainty of the British crown.

But, as the spectacle of Victoria’s jubilee offered a vision of the world’s most powerful policy, the commemorations for Queen Elizabeth’s 70-year-long rule can’t hide Britain’s much-diminished state.

This week, Australia appointed Matt Thistlewaite as the country’s first minister tasked with overseeing a transition to a republic, fueling growing concerns that Canberra’s new Prime Minister could call for a referendum to remove the Queen as sovereign.

Although Elizabeth’s 70-year reign is mostly associated with the United Kingdom, she is technically the head of state for 14 other countries — the direct remnants of the empire — known collectively as the Commonwealth realms. The Commonwealth realms represent the last vestiges of a forgotten empire, a fraying thread that binds the Queen to 150 million people outside of the UK, most of whom have never experienced the relationship with Britain that predates the group’s origins.

History of the Commonwealth

The Commonwealth was born from Queen Victoria’s attempt to maintain control over the colonies despite their growing cries for independence. In 1867, after Canada made its frustrations with imperial oversight known, the Queen agreed to grant the territory dominion status, which meant that it would have self-rule, but that Britain could veto policies at the monarch’s discretion.

In subsequent decades, British colonies (primary white ones) became dominions too, including Australia, New Zealand, and South Africa. After the first World War, rising nationalism in the dominions once again altered the status quo and in 1926, Britain and the dominions agreed that they would be equal in status. That declaration, formalized in 1931, noted the founding of the British Commonwealth of Nations.

Although India was present at those talks, it continued to push for full independence and when New Delhi was invited to join the Commonwealth in 1949, Prime Minister Nehru agreed with a pivotal caveat. India petitioned the group to allow its membership without the requirement that it had to swear allegiance to the Crown. The member nations agreed and later that year, India, Pakistan, and Ceylon (modern day Sri Lanka) were added to the ranks.

The Commonwealth of Nations grew into a body encompassing 54 member states, including a few who were never British colonies. Those countries recognise their shared values ​​and ties to the British Empire but don’t recognise the queen. Members of the Commonwealth realms are all independent sovereign nations, but the Crown still retains its right to supersede certain matters.

The Queen and the Commonwealth

Queen Elizabeth first cemented her dedication to the Commonwealth on her 21st birthday when she issued a broadcast from South Africa addressing “the youth of the British family of nations” and promising to pledge her life to the service of the union. Similarly, after her coronation, the Queen embarked on a tour of the Commonwealth, and once again was greeted with much ceremony and fanfare. Her popularity tends to stem from both her impartiality and the fact that having visited 116 countries, she is likely the best traveled head of state in history. The 96-year-old Elizabeth is Britain’s longest-reigning monarch and the first to serve for seven decades. (AP)

Her many tours have become symbols of Britain’s diplomacy and while she rarely speaks publicly about her social views, many of her visits have leant credibility to racial equality and ties between nations. Notably, in 1995, she visited South Africa to commemorate the end of apartheid and induct the African nation into the Commonwealth.

Some, like the historian Ben Pimlott, suggest that the Queen needs the Commonwealth more than it needs her. He had stated: “The monarchy, with its imperial memory, keenly sought a Commonwealth role, partly to justify itself, but also because it had taken its supra-national role seriously, and – in a way that was never quite understood by politicians – it continued to relate to distant communities which showed their loyalty in ways that did not necessarily come to the attention of Whitehall.”

However, despite this bond, the Queen has no influence on the governance of Commonwealth of Nations members and little influence on those that form the Commonwealth realm. In terms of the latter, the Queen does have some constitutional duties, notably, the approval of new governments. Depending on the country she may also formally approve legislation, grant state honors, and appoint certain officials.

Yet, according to a report from the Council for Foreign relations, these roles are “largely ceremonial.” There is one significant exception, however. In 1975, the Governor of Australia (the Queen’s representative to the country), unilaterally dismissed the sitting prime minister to break a General deadlock which in turn sparked a constitutional. Apart from that, the Queen has rarely intervened. The Red Arrows perform a flypast after the Trooping the Color ceremony. (AP)

It is also worth noting that the British monarch is not automatically the head of the Commonwealth although the organization did announce in 2018 that prince Charles would succeed his mother.

Why do countries leave?

In the 1970s, a host of countries chose to leave the Commonwealth realm, including Dominica, Guyana and Trinidad and Tobago. Last year, Barbados became the most recent country to leave with its Governor General arguing that “the time has come fully to leave our colonial past behind”. The exit was also timed to mark the 55th anniversary of Barbados’s independence from the UK.

The association with colonisation is what prompted India and Nigeria to refuse to join the realm and now, it is being discussed by member states as the reason to leave. In this regard, the Queen’s backseat role in governance plays a significant role. While nationalist debates often capture the political heartbeat, for many of the people living in the realm, the organization plays only a small role in their lives. They, unburdened with knowing the realities of colonialism, may only associate the Commonwealth with the infrequent visits from the Queen or with the popular Commonwealth games. 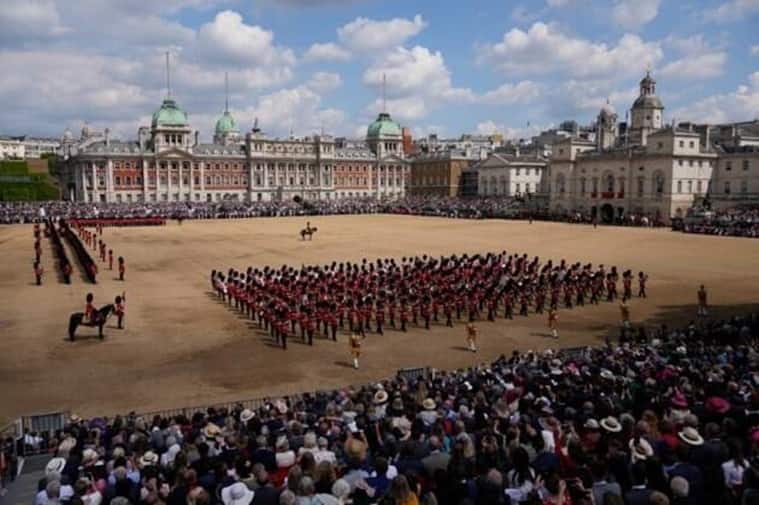 The Queen’s guards march during the Trooping the Color parade at Horse Guards. (AP)

Another reason for leaving is that the priorities of Britain may not align with those of member states. Although in recent years, those divides may be cultural, in the past they have also concerned matters of foreign policy. In 1939, when the UK declared war against Nazi Germany, the Union of South Africa and Canada waited over a week to do the same. During that period, King George VI, as king of the United Kingdom, South Africa, and Canada, was both at war and at peace with Germany.

Such stark contrasts are rare today, but the Black Lives Matter protests have created a rift between the crown and its black Commonwealth subjects. Jamaica, a member of the realm, has been particularly vocal in this regard, even petitioning the Queen for reparations for the Crown’s role in the transatlantic slave trade. A crowd fills The Mall as they wait for the royal family to appear on the balcony of Buckingham Palace in London. (AP)

Analysts have contrasting views on the likelihood of any more departures from the realm. Kings College professor, Richard Drayton, has argued that Barbados could be the tipping point while leaving others have stated its impact may be muted given individual country’s requirements for breaking with the Crown.

In Canada leaving the realm would require a constitutional amendment, despite the fact that over half of Canadian voters support removing the Queen as head of state. There is also the matter of popularity. While the Queen continues to garner respect, the same may not be true of her successors. Perhaps then, when her seven-decade long reign comes to an end, so too should a union forged on the basis of subordination and tainted by its association with racism and colonial rule.