When the climate and politics decide to take a break from bringing bad press to the National Capital, and good-forces-willing, COVID will too, the Habitat International Film Festival (HIFF) returns in its physical form this week, from May 6- 15, at the India Habitat Centre, after a hiatus of two years. Ever since the Osian’s-Cinefan Festival bid the city’s film enthusiasts adieu, HIFF has tried to fill in that gap and has been a regular on Delhi’s annual culture calendar. And while HIFF remains a small festival in comparison to many other state festivals — the Stein Auditorium can only seat about 600, and now with COVID restrictions, not even that many — its selection continues to be eclectic. One hopes that even as the city’s character is being changed by a force majeure, its cultural festivals would remain as is.

“HIFF, though smaller and more niche in comparison to other film festivals, has carved out a special space and a loyal audience. Right through the last two years, we have continued to engage with our audiences with our weekly online calendar, which included, in a large part, online films. With the opening up of the venue, we felt that having a physical festival is what people were missing. The human connect, the discussion, debate, Q&A sessions and post-film interactions. Ideally, we would have loved to have had this as a hybrid festival with both digital and physical options. However, it is easier said than done. Being a niche self-funded festival, both our spending and the short turnaround time between the relaxation of physical events at the venue and now decided what was possible…it’s a miracle that we have what we have!” says Vidyun Singh, creative head of programmes, India Habitat Centre, who hopes that there’s no sudden surge, all practical measure in terms of sanitisation, ventilation and contactless booking and entry are being adopted at the festival.

HIFF will open with Lee Joon-ik’s award-winning Korean historical drama The Book of Fish, a black-and-white period film that explores the unique friendship between an exiled scholar and an ambitious fisherman in a rural village, and close with the fishing Pedro Almodovar’s Oscar-nominated, Penelope Cruz-starrer Spanish film Madres Paralelas (Parallel Mothers), which had received a nine-minute standing ovation at the 78th Venice Film Festival. The line-up of over 60 films from home and the world includes a special package of contemporary Korean cinema (celebrating 10 years of Delhi’s Korean Cultural Centre), such as In the Name of the Son, Chorokbam, Siere, The Cave. The other visitors include Asghar Farhadi’s much-controversial Iranian moral drama A Hero, Elie Wajeman’s French film Médecin de Nuit, Roy Andersson’s 2019 Venice Silver Lion winner Swedish drama About Endlessness, Baljit Sangra’s Canadian documentary Because We Are Girls, 2021 César Awardee (the French Oscars) Deux, among others.

“One way this edition is different from previous HIFF’s is the inclusion of a segment of Indian Cinema. Normally, we have an entire festival of pan-Indian films, rather than Indian cinema being just a small part of the larger whole,” says Singh. Some of those who will likely be the crowd-pullers at this year’s HIFF, here are eight of them:

Koozhangal was India’s official entry to the 94th Academy Awards.

PS Vinothraj’s debut Tamil feature, which won India its first prestigious Tiger Award, at the International Film Festival Rotterdam (IFFR) in 2021, and was India’s official entry to the 94th Academy Awards, is the story of an alcoholic, ill-tempered father and his reticent son, who make a journey through the sub-Saharan-looking Tamil Nadu’s terrain to a village to bring back their wife and mother, respectively. And in that sweat-and-dust-ridden journey, human emotions, like the landscape, are laid bare.

From the contemporary (angst of the marginalized lower caste) to the historical (paranoia in the backdrop of the ’80s militant unrest), the Punjabi life and society is the raison d’etre of his cinema. The man who brought to us critically-acclaimed Punjabi films like the Venice-premiered Anhe Ghohrey da Daan and Cannes-premiered Chauthi Koot, Gurvinder Singh’s third film, which premiered at the IFFR Rotterdam 2022, is about a man, freed after serving a jail term, who is trying to rebuild his life, but with altered familial equations, and the play of untenable emotions within and without, will he be able to? 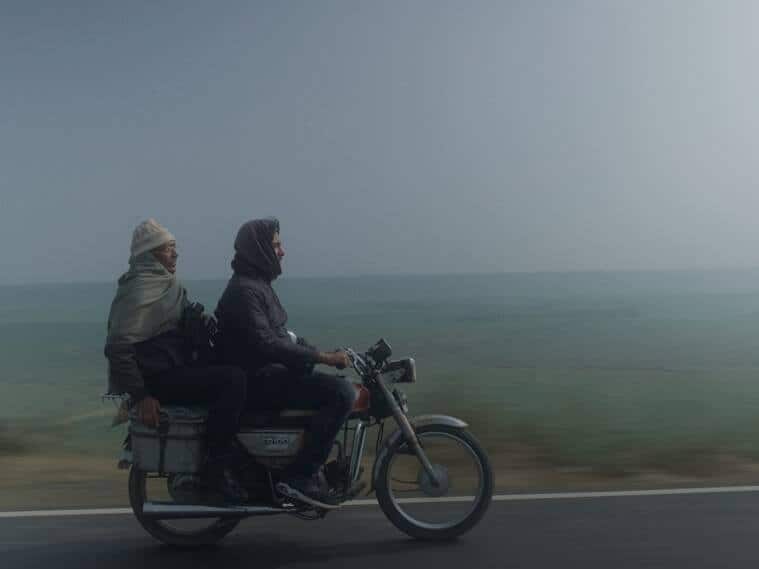 A still from Dhuin.

Achal Mishra’s picturesque nostalgia-filled warmth of a debut film Gamak Ghar, which came just when the pandemic gave us time to think about our families, made an indelible imprint on our psyche rekindling memories of our own ancestral homes, joint families and a way of life one long left behind. Mishra knows what strings to pull, his films, in Maithili, are a deep note of the sarod, a melancholic celebration of human relations and emotions in a way a few films do. In his second film, a small-town theater-actor son is torn between his dreams of becoming a film actor in Mumbai and his filial duties towards a family with deep financial strains owing to the COVID-imposed lockdown rendering people jobless and without means to end for their own.

In their Malayalam film, which premiered at IFFR Rotterdam 2022 and screened at International Film Festival of Kerala 2022, Rahman Brothers (Shinos and Sajas Rahman) bring a unique film, which charts a day in the life of a theater group – all male performers, of the ballet-like folk performance art chavittu nadakam, practiced by Catholics in Kerala – who arrive at the venue of their final play performance. The film isn’t about that performance, which when it starts the film ends, and we are its only remaining audience. It eschews a typical dramatic narrative. We only get glimpses of what the final play – a satire, perhaps – contains through their day-long rehearsal sessions. For once, it is respite to watch a group of men engaged in a creative output, doing something productive unlike adult men brawling over something or indulging in gang wars, like in the more popular Malayalam films, including those of the critically-acclaimed Lijo Jose Pellisery. The men, in Chavittu, dance, sing, have fun, but reveal no individual, personal emotions. They are only their characters in a play. Premiered in Tokyo last year, and then screened at IFFK Kerala and in Kolkata’s People’s Film Festival, Ritesh Sharma’s hair-raising Hindi debut shows the dark lanes of Varanasi, the shadows of a city that will not speak of, most definitely not in election and political campaigns in the PM’s constituency. Titled on a Kabir bhajan, the film shows the parallels in the stories of two commoners, both are a minority, one is by his faith (a reclusive weaver) and the other by her gender (a feisty street dancer), and both are victims of alpha-male majoritarian hooliganism, both have to pay a price for just existing.

Busan-premiered film by Madhuja Mukherjee, a professor at Kolkata’s Jadavpur University, In the backdrop of 2011, when the Left parties have been voted out of power and from people’s hearts, after decades of their run in the city, Deep6 delves deep into the personal and political world of a young solitary woman (Tillotama Shome) as she strides through multiple lives, blurring the lines between the past, present and future and encounters many ghosts — the living, the dead, and the undead. Who really is she? Was she predestined for this? How will she break through the cycles of her choices, her situation and forces beyond her control that have trapped her? Can she break free of herself? 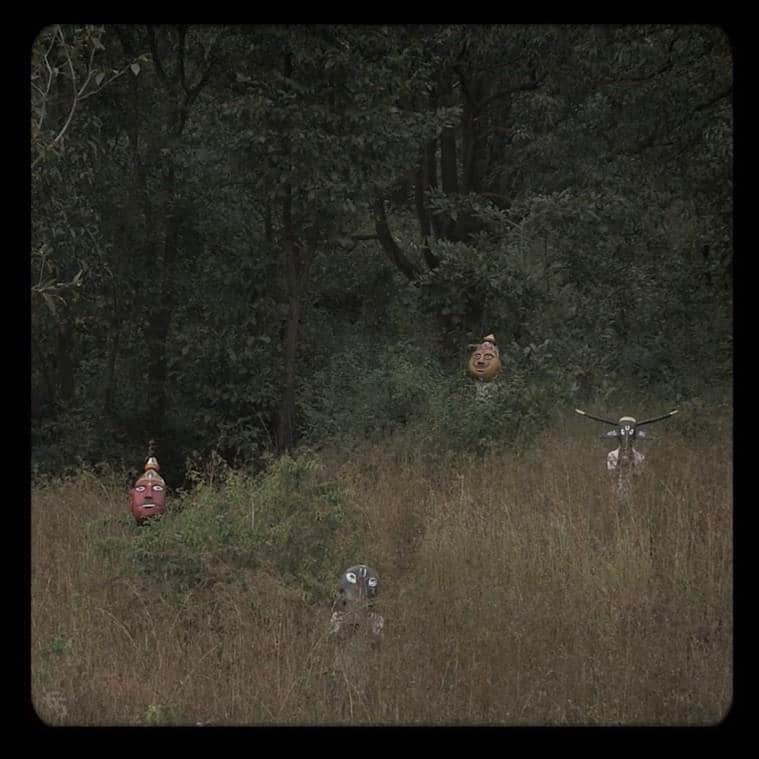 Kalsubai had its world premiere at Vision du Réel in Switzerland, picked up an award at the Oberhausen International Short Film Festival 2021.

It had its world premiere at Vision du Réel in Switzerland, picked up an award at the Oberhausen International Short Film Festival 2021, and just screened at the Indian Film Festival of Los Angeles 2022. Yudhajit Basu’s 20-minute Marathi ethnographic documentary unfolds like an oneiric storytelling. It trains the lens — which stays at a long distance, observing — on the Mahadeo Koli tribe of Maharashtra, and their legend of Goddess Kalsu, whose story and identity remains entrenched in the consciousness of the women of the tribe even today. Even of their men. The nature and human coalesce as folklore meets documentary, narrated in the voice of Jyoti Subhash. As the human Kalsu who defied patriarchy, the cult of the maternal goddess Kalsubai, who embraces the marginalized, especially childless women, is a narrative rooted in feminist assertion and resistance. If not for films like Kalsubai, how else will India’s multiple stories and narratives of its myriad communities and tribes, and their gods and goddesses survive in the face of the imposition of a singular “nationalising” mission of one-male-god-in a-temple kind of faith. Before the mainstream subsumes the lives of the fringes, watch the film — an ethnographic treasure. The Beatles and the Maharishi (Source: Colin Harrison/Avico)

The Beatles and India

There are cows, rickshaws, the Beatles’ visit to Maharishi Mahesh Yogi Ashram in Rishikesh 1968, the start of a lifelong relationship between Sitar maestro Pandit Ravi Shankar and Beatle George Harrison, and more. The documentary, with archival footages and interviews, directed by Peter Compton and Delhi-based Ajoy Bose, who wrote Across the Universe: The Beatles in India (2018, Penguin), captures the Fab Four’s emotional and cultural connect with India, and explores how India changed the course of the lives of the greatest rock band ever — The Beatles.

Free online passes will be available on http://www.habitatworld.com.