Until recently, this city was infamous as one of the world’s organized crime capitals. Warring mobsters gunned down rivals in the streets and built ugly high-rise apartments with public funds while much of the historic center was left to crumble.

Palermo authorities have since managed to clamp down on the Mafia, and the city, Sicily’s capital, feels like a different place today. Anti-Mafia posters are a common sight on the fronts of buildings, and the streets now throb with tourists. But Palermo’s bounceback is fragile, and many remain wary that the Mafia could stage a comeback.

A key point in Palermo’s turnaround was the murder of Giovanni Falcone, a judge who pioneered new methods to combat Mafia influence and paved the way for the restoration of law and order. The Mafia had its revenge in 1992, killing Falcone in a bombing that horrified residents and united them against the mob.

The works are part of a public art program called Spazi Capaci, and they were inaugurated on a day when Palermo also hosted a remembrance for Falcone, attended by dozens of dignitaries, including President Sergio Mattarella of Italy. But the art initiative was anything but a stately affair. Instead, a number of the works generated heated debate.

The Spazi Capaci project has been organized by the Fondazione Falcone, an anti-Mafia organization, with funding from Italy’s Education Ministry as well as private donors.

“We have always known that culture is one of the best weapons against the Mafia,” said Maria Falcone, sister of the murdered judge and president of the Fondazione Falcone. “Repression alone is not enough,” she added. “You also need social and cultural work for that.” 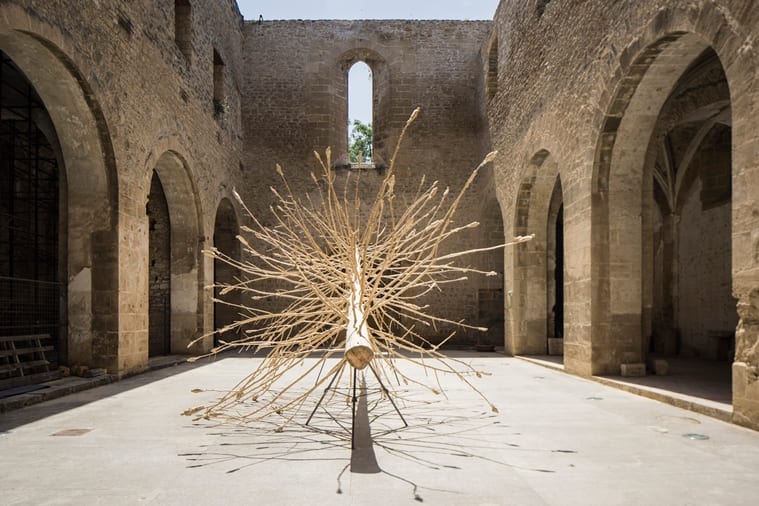 Gregor Brugger’s “Tree of Everybody,” an art installation in the roofless Church of Santa Maria dello Spasimo, in Palermo, Italy on May 24, 2022. This work — a tall fir tree, laid on its side, with wooden figurines grafted onto its bare branches representing victims of organized crime — is part of a public art campaign bearing witness to Palermo’s grim Mafia years. (Gianni Cipriano/The New York Times)

One of the public artworks, Gregor Brugger’sTree of Everybody” — a tall fir tree, laid on its side, with wooden figurines of Mafia victims grafted onto its bare branches — looks striking installed in the roofless Church of Santa Maria dello Spasimo. At the other end of the building sits Peter Demetz’s “The Triumph of Memory,” which consists of a carved wooden panel depicting Falcone and Paolo Borsellino, another magistrate who was killed by the Mafia. The carving is framed by a rusted metal stand and mounted in front of a milky white LED pane.

“I wanted to represent Falcone and Borsellino looking towards a brighter, fragile future,” Demetz said. “The work reminds us that we need to be strong because fragility is what the Mafia feeds off.”

A detail of Velasco Vitali’s sculptural installation “Pack” – over 50 life-size dogs made from rusted metal, peeling concrete and stained paper — on display in the Church of San Domenico, in Palermo, Italy on May 24, 2022. A public art Campaign in Palermo, Sicily, is a reminder and testimony of the city’s grim Mafia years. (Gianni Cipriano/The New York Times)

Across town, in the Church of San Domenico, which holds Falcone’s tomb, Velasco Vitali’s sculptural collection of more than 50 life-size dogs — made from rusted metal, peeling concrete and stained paper — were mostly heaped in a pile near the entrance. Titled “Pack,” the roving work had been displayed in several locations around Palermo over the past year before being moved to the church.

Falcone helped liberate Palermo from the Mafia by collaborating with turncoats, investigating bank accounts and sharing information across borders. His findings culminated in an epic trial, resulting in more than 300 guilty verdicts in 1987.

When mobsters slaughtered the judge in revenge, Palermo reeled in horror. There were huge protest throughout the city, and many residents hung white sheets displaying anti-Mafia messages from their balconies.

Leoluca Orlando, Palermo’s mayor, who has held the office five times since 1985 and is famed for his own anti-Mafia crusades, said that Falcone’s killing was a “watershed” for the city because it united residents in a “popular revolt.”

After winning a second, landslide election in 1993, Orlando limited Mafia influence with new legislation, revoking public contracts awarded to companies with Mafia links. He also increased funding for culture, including projects like turning the Spasimo Church, once a rubble-filled dump, into an arts center and reopening the Teatro MassimoPalermo’s opera house, after a 23-year renovation during which the Mafia siphoned off public funds.

“If you have self-esteem, you are not just against the Mafia,” Orlando said, “you are diametrically opposed to the Mafia.”

Palermo residents flooded the streets Monday, forming a large crowd for the remembrance ceremony. The art installation drew interested passersby, too. In the Church of San Domenico, where schoolchildren left flowers and personal messages on Falcone’s tomb, visitors stopped to look at the dogs, some discussing the meaning of the work.

Davide Formisano, 32, who works at the church, said that Vitali’s installation had generated contrasting opinions. “Many like the work, some are against it, some are annoyed, some are amazed,” he said. “Some have even said it is heresy.”

But it was good that people were debating the art and talking about the Mafia, Formisano concluded. “That, after all, is what Giovanni Falcone fought for,” he said.