Calling on the youths, especially from the tribal communities, to come forward in a “struggle for rights”, Congress leader Rahul Gandhi Tuesday urged the tribals to draw inspiration from Vadgam MLA Jignesh Mevani for his “fearless fight” against the BJP. Gandhi, who launched the Adivasi Satyagraha of the Congress party that aims to win 40 Gujarat Assembly seats from the tribal belt — Purva Patti — of the state, also “guaranteed” that if voted to power, Congress would scrap the Par Tapi Narmada river link project.

Gandhi, who arrived in Dahod for the launch, also met with Congress MLAs of the tribal seats of Gujarat along with other tribal leaders to discuss the upcoming strategy of the party. As many as 27 of the 40 seats in Purva Patti are reserved for Scheduled Tribes candidates.

Rahul Gandhi Tuesday urged the tribals to draw inspiration from Vadgam MLA Jignesh Mevani for his “fearless fight” against the BJP. (Express Photo by Bhupendra Rana)

In his address to the tribal gathering, Gandhi said, “Whenever an infrastructure project is built, every brick is laid by the tribals. You created Gujarat, you built the infrastructure in the cities of Gujarat but what did you get? No education, no health or no rights. They are talking about linking Par Tapi and Narmada, they will take your land and water and give it to the millionaires. But I can guarantee you, if the Congress government comes to power, we will scrap this project.”

Calling on the tribal youth to join the Satyagraha to save “your future from being sold off”, Gandhi invoked Birsa Munda and turned to Jignesh Mevani on the dais asking the youth to draw inspiration from the Vadgam MLA.

He said, “Birsa munda has long shown the way; it is time to struggle. Tribal youths have to join with Congress and work hard. Don’t be scared (of state action on protestors). Jignesh is sitting here. Gujarat is the only state that needs permission for a protest. They gave him a three-month jail term for protesting without permission but I know him. You can give him 10 years in jail and it wouldn’t matter or change anything. The youth of Gujarat understand this so I am telling you we need to make a new Gujarat. If you want education and health, they won’t give you. They want to sell your future to the millionaires. Whatever be your caste, the youths have to come forth. The Congress and I are with you 24 hours. Our old model of the people, the Amul model, we want to bring it back to Gujarat to run the government.”

Gandhi also launched a kit, a mobile app and a party song, specifically composed for the Adivasi Adhikar Satyagraha of the party. Gandhi said that had it not been for the MGNREGA scheme of the Congress party, the tribals would have suffered during the Covid-19 crisis. 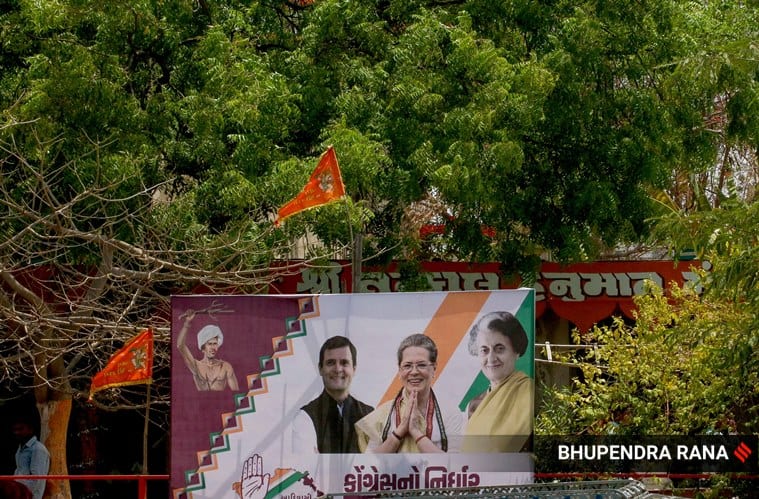 Enlisting the healthcare benefits offered by the Congress government in Rajasthan, including a Rs 10 lakh health insurance cover. (Express Photo by Bhupendra Rana)

He said, “PM Modi once made fun of MGNREGA in front of the world. He said, ‘I want to scrap MGNREGA but I won’t because people should remember what the Congress did.’ And, now you see what happened in the Covid-19 crisis. If there was no MGNREGA, what would it have been for the tribal people in the tribal districts? MGNREGA ensured work even in such a time. Today BJP is running MGNREGA schemes. It was the Congress that had introduced it.”

He added that during the UPA government, the wealth of the people — water, forests and lands — were secured. Gandhi said, “The UPA government tried its best to help benefits of water, forests and land reach all Indians — Dalits, tribals and others. We brought the Panchayats (Extension to Scheduled Areas) Act (Pesa) law to be able to return your land to you. MGNREGA gave guaranteed work of 100 days. The whole country implemented it and crores of people were benefitted. We brought land laws for fair acquisition. We changed the British law. No one can take your land without asking you. With four times compensation than the market awarded, your land will be acquired through a process. We did this. This is your land, not of the Gujarat government or the Chief Minister.”

Attacking the BJP and Prime Minister Narendra Modi for helping “select few millionaires”, Gandhi said, “Modi became the Prime Minister in 2014. What he started doing in Gujarat as the Chief Minister, he is now doing the same in India as the Prime Minister. Today as per the Gujarat model, there are two Indias — one of the rich, selected people, millionaires, bureaucrats, who have power, money and arrogance. The other India is the India of the common people. This was tested in Gujarat first and has been implemented in India. Congress wants one Hindustan which has respect for all, opportunity for all, education for all and healthcare for all. The Prime Minister imposed demonetisation. They took your money from your pockets but could not reduce black money.” 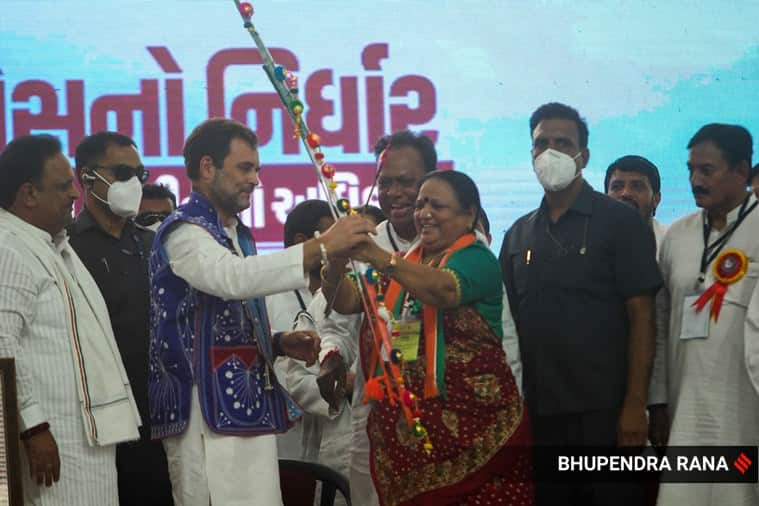 Gandhi said, “Your voice, which is inside you, we will bring it out through this Satyagraha. We will make this government hear your voice not just the government of Gujarat but the Prime Minister.(Express Photo by Bhupendra Rana)

Lashing out at the BJP for using the media to “distract” people, Gandhi said, “Selected millionaires in India can see any dream because no law applies to them but the second India has poor people, who go to hospitals to die in times like Covid-19 because you won’t get oxygen, ventilator or even bed. You have seen on TV many people died outside hospitals but the PM says ring bells with your plates and put on your mobile phone torches. The media doesn’t ask them how three lakh people died in Gujarat or that Ganga was filled with dead bodies. You cannot see any tribal leader on TV or a poor person or a farmer because you will only see Narendra Modi’s face on TV. There is no other face in this country so you will only see Modi’s face 24 hours.”

Speaking about the privatisation of hospitals and schools in Gujarat, Gandhi said, “Tribals breathed their last in hospitals in Covid-19 because they didn’t have money. They can’t go to government colleges and because one after the other they are shutting down the colleges just like the hospitals.”

Enlisting the healthcare benefits offered by the Congress government in Rajasthan, including a Rs 10 lakh health insurance cover and a “network of government English medium schools” in Congress-led Chhattisgarh, Gandhi said, “Your voice, which is inside you, we will bring it out through this Satyagraha. We will make this government hear your voice not just the government of Gujarat but the Prime Minister. In Rajasthan and Chhattisgarh, we had guaranteed that the farmer loans will be waived off and grains will be sold at Ra 2,500. We did what we guaranteed. We have not come here to make promises but to understand what you want us to do and we will hear it from you and give you a guarantee that we will do it and not just throw shallow words. The youths and the people have to stand up for the truth without fear.”