In his annual ‘Victory Day’ address in Moscow, after thousands of soldiers had marched before him, President Putin did not make any dramatic announcement of the kind Western analysts had widely expected. Putin merely said “Defending the motherland had always been sacred,” apparently referring to Donbas, which Ukraine regards as its own territory but which Russia too has long claimed, and which now seems to be, along with portions of southern Ukraine, the main focus of Russia’s assault. “Today,” Putin told the soldiers, “You are fighting for our people in Donbas, for the security of Russia, our homeland.”

In the last few days, one merciful piece of news from eastern Europe’s large space of devastation, officially by both Ukraine and Russia, was that “all elderly people, women and children have been confirmed evacuated from the besieged Azovstal steelworks in Mariupol”, south Ukraine’s shared coastal city.

Surely it is now time for countries like India, Turkey, South Africa, and Brazil (all of them neutral thus far in this horrific conflict) to work actively, and if possible unitedly, for a cease-fire, to be followed by serious peace talks.

Bill Burns, the CIA director in the US, thinks that Putin has been “stewing” for years over Ukraine — once part of the Soviet Union — in a “very combustible combination of grievance and ambition and insecurity.”

Other observers may use a different set of words, but most seem to agree that Putin is convinced that history has mistreated Russia, a view widely shared by Putin’s compatriots. Before commenting further on Russia’s conflict with Ukraine, let me recall oft-overlooked similarities between Russia and India.

Occupying, respectively, the northern and southern portions of Eurasia, which is our earth’s largest landmass, Russia and India also belong to the same psychological map. If “the exalted destiny of Russia” is a deep belief among Russians, an impressive number of Indians assent spontaneously to the image of India as the Vishwa Guru. Moreover, many in India too are drawn to the view that history has mistreated their nation. Occupying an even larger space than today’s Russia, the Soviet Union was dismantled in 1991. Russian regret over this is matched by regret in India over the 1947 Partition.

One reason for Russia’s attractiveness to an Indian mind is that Russia wasn’t and isn’t Britain. The Tsarist Empire’s long 19th-century contestation with imperial Britain, the so-called Great Game, intrigued and pleased Indians. And although many Indians think of Russians as whites and westerners, others in India recognize that Russia is an eastern power. Not merely because Russia’s eastern boundaries go way past Japan and almost touch North America, but because an influential part of the Russian mind thinks of itself as oriental. In seeing the West as the Other, many Indians and Russians are as one.

Over the decades, a number of Indians have studied and lived in Russia, learned Russian, and also learned that there is a good deal more to Russia than Communism. Tagore’s 1930 visit to Russia was a milestone, as was the earlier 1909-10 correspondence between Gandhi and Tolstoy, who for many Indians remains, more than a hundred years later, a revered novelist-thinker.

In short, there is far more to Russia in the Indian mind than Putin, far more even than Russian oil, far more even than the advanced weapons or spare parts for older weapons needed for India’s defence. Which means that Indians cannot simply sit with folded hands and watch Russia slide rapidly downhill as a result of Putin’s Ukrainian misadventure. 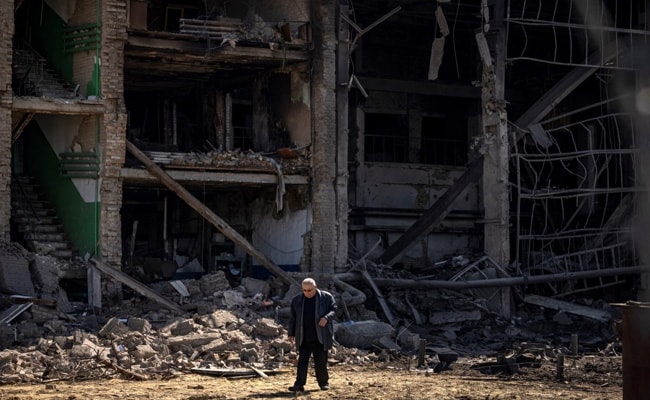 That would be almost as heartless as watching without any reaction the daily destruction of Ukrainian buildings — including schools, hospitals, homes, even a museum! — by Russian shells, bombs and missiles. Both Ukraine and Russia, once intimately connected to each other, both possessing critical ties with India and a number of other countries, are crumbling before the eyes of a world that seems unable or even unwilling to arrest the destruction.

While there was something unexpected and impressive about Europe and the western alliance getting its act together to assist a nation attacked by a more powerful neighbor, the smell being emitted by the war’s continuance is not pleasant. The continuing devastation of Ukraine cannot be the only way to teach Russia a lesson.

To say this does not imply that the central fact – the central folly — of Putin’s aggression should be forgotten. It does mean that the world’s minds must be prodded to see how the ongoing devastation can be brought to an early end. That is not necessarily everyone’s first concern. In an analysis offered on the BBC, Michael Clarke, a British professor of defense studies, says: “Any significant Russian military success will likely create a major, open-ended insurgency that will get bigger for every Russian district forces may overrun. One way or another, Russia will have to keep fighting in Ukraine, either against the population, or against the Ukrainian army, and quite possibly both simultaneously.” “The western powers will keep supplying weapons and money to Kyiv, and will not be lifting powerful sanctions on Russia anytime soon. Once Europe’s energy dependency on it is greatly reduced, Russia has so little that Europe really needs, the US and Europe will be able to leave crippling sanctions in place with small cost to their own sanctions.”

What is being envisaged, thus, is a prolonged fight that chiefly hurts Russia — and destroys Ukraine! The war’s continuance is of no benefit to the world as a whole. Common sense and simple humanity demand that countries that can initiate a peace process, countries that both Moscow and Kyiv might listen to, ie countries like India, Turkey, South Africa and Brazil, should quickly get to work. There is little doubt that another crucial country, China, would also welcome an end to the fierce and limitless destruction, involving intimately connected people, in eastern Europe.

(Rajmohan Gandhi is currently teaching at the University of Illinois at Urbana-Champaign.)