If I miss the Five Ratha Complex and still claim to have visited Mamallapuram, people might literally laugh at me. Yes! It is one of the most picturesque and famous monuments of the heritage-rich town.

My two previous posts give a detailed introduction to Five Rathas and exclusive coverage of Draupadi Ratha. As it is a series of articles, please access these links and go through the content if you have not yet read them.

This article focuses on Arjuna Ratha. I will continue to cover the other three Rathas in my subsequent posts.

(Note: I wrote about most of the monuments in Mamallapuram about ten years ago in my blog. This series of articles is my attempt to provide much detailed coverage on all aspects of the Pandava Rathas.)

Arjuna Ratha is the second monolithic structure in the Pancha Ratha Complex. It is built over the common platform shared with the Draupadi Ratha. This base platform can be reached by a flight of steps and is supported by alternating elephants’ and lions’ figures.

Similar to other Rathas on the premises, it is named after a Pandava brother, Arjuna. Till the early 19th century, it was called Sahadeva Ratha. However, both these names are misnomers. There is no connection with any of the Pandava brothers. It is supposed to be a temple of Shiva.

The 20-feet high west-facing Ratha has a Garbha griha (sanctum) and an Ardha mandapa (front porch).

The Garbha griha is devoid of any deity now. However, it is reported that a broken image of Shiva Linga was there till the early 20th century. We can still find an empty socket where Linga was kept. It must be a later addition. A pedestal carved on the back wall is probably made to fix the relief image of Somaskanda.

It is undoubtedly a Shiva temple based on the characteristics of icons found in the niches around the temple.

The beam above the ardha mandapa entrance has a Ganas frieze. The cornice above the shaft has three pairs of kudus with inset human faces. (Kudu is a horseshoe-shaped arch serving as a decorative motif.)

The Vimana (super-structure) is a Shatanga vimana with six components. The structure can be horizontally divided into six parts: Adhisthana, Pada, Prastara, Griva, Shikhara, and Stupi.

Having two talas (tiers), the vimana is called Dvi-tala Vimana. The decoration scheme in each story has an oblong-shaped mini shrine in the middle (called Sala) flanked by two square-shaped miniature shrines (called Kuta). These shrines are interconnected with cloisters (called Harantara). All these small shrines and cloisters have Kudu designs on their top.

The ground floor and the first floor follow Dravida architectural style. But the shikhara is in Vesara style. As it combines both Dravida and Vesara styles, the Vimana is categorized as Dvi tala Mishra Vimana.

The first floor has nine Koshtas (niches), three in each direction. As there is no provision to reach there, it is not known what is depicted in the central niche. The niches in the eight corners depict eight divine couples carved only up to their waists. Do they represent Ashta Dik Palas (guardians of eight directions) and their respective consorts? Possibly, yes! However, it should be noted that no other ancient temple in South India has Ashta Dik Palas accompanied by their consorts. They are usually depicted alone.

The beam above has a frieze of Vyalas. The cornice above the beam has three pairs of kudus with inset human faces.

The crown (Shikhara) is octagonal in shape. The finial (stupi), placed above the top, fell down many years ago. It is kept on the floor near the temple.

The outer wall on three sides (Pada) is divided vertically into three divisions. The central division is called Sala or Bhadra, and the divisions on two extreme corners are called Karnas. There are two intervening recessions in-between, thus making five projections. All the five projects on the three sides have niches. Each of them is separated from the other by similarly designed pilasters. The central niches have images of deities. The niches on the recessions have mostly royal couples, sages, or other Gods. The niches on the extreme corners have the sculptures of Dwarapalas (door guardians). These sculptures are some of the best sculptures produced by the Pallavas ever.

On the north external wall, there are five Koshtas (niches).

In the central (Bhadra) niche, Vishnu is found in the standing posture as Garudantaka murti. He holds sankha (discus) and chakra (conch) in his upper arms. His lower right arm is in Anjali mudra. To his left side, his attendant Garuda is found. It is rare to find him in a complete human form like this. He is seen kneeling down and hence looks shorter than his master. His left arm rests on his bent leg. His right arm’s fingers are kept at his lip. It appears as if Vishnu is about to mount on Garuda. Else, he might be resting his body on the shoulders of Garuda.

The recess on the right side of the central niche remains unfinished.

We find a royal couple on the proper left side of the central niche. Unfortunately, it is not easy to guess which Pallava King and Queen these icons depicted. The female is found standing behind the male. The male appears to be in the process of moving his face towards his consort. He wears Yagnopavitam (sacred thread). There are three positions in wearing the sacred thread. If it is worn over the left shoulder and under the right arm, it is called Upavitam. If it is worn in the reverse order, it is called Prachinavitam. If it is worn around the neck and over the chest, it is called Nivitam. This male figure has the thread over the left shoulder and above the right arm in this sculpture. It appears as if the person depicted here is changing the position of Yagnopavitam from Nivitam to Upavitam.

The niche on the eastern end (Karna niche) has a standing male image. His entire body faces towards the central niche. He is assumed to be a Dwarapala.

The niche on the western end (Karna niche) has a beautiful icon of Dwarapala. Although his body faces towards the central niche, his face is slightly turned towards us. He holds a flower in his left arm and his right arm rests on his hip. As explained above, he also wears yagnopavitham (sacred thread) over the left shoulder and over the right arm.

On the east external wall, there are five Koshtas (niches).

In the central (Bhadra) niche, we find a male in royal costume seated on an elephant. Who is this? Is he Indra seated on his mount Iravata? Else, is he Shasta or Subramanya? The face looks kind and gentle. He has two arms. As this monolithic temple belongs to Shiva and as the other two niches have primary Gods such as Vishnu and Shiva, I believe this icon cannot be of Indra. He must be Subramanya.

On the proper right side, we find the sculptures of two elegant ladies. These breathtakingly realistic images are masterpieces of Pallava sculptors. Both the girls have slender bodies, narrow waists, and tapering thighs. The girl who faces the central niche has kept her left arm near her face and slightly tilted her head. We can also observe a blushful smile on her face. It gives us the impression that she feels shy. The other girl looks in the other direction holding the arm of the earlier girl. She probably does not observe her lover on the other side and indulges in conversation. Both these divine girls can be identified as Valli and Devasena, the consorts of Subramanya. The presence of two girls is another reason why it feels relevant to call the central sculpture Subramanya rather than Indra.

On the proper left side of the central niche, we find a sage holding a staff along with his disciple. The disciple is shorter than the sage. The long matted hair and beard help us identify the taller figure as a sage. Both of them are walking away from the centrally located deity. We can assume that they are returning to their abode after their meeting with Subramanya.

On the Karna niche in the proper right corner, a stylishly standing Dwarapala holding a bow is found. He wears the sacred thread made of human skulls. We can associate skull with Shiva or even with his son Subramanya and definitely not with Indra. This is yet another reason for considering the central sculpture to be Subramanya. The Dwarapala has his legs crossed with each other. His right arm rests on his waist.

On the Karna niche located on the proper left corner, a Dwarapala wearing yagnopavita, is found standing. His right arm is in adoration and his left arm rests on his waist.

On the south external wall, there are five Koshtas (niches).

In the central (Bhadra) niche, Shiva is in the form of Vrushabhantaka Murti. He has four arms. He is stylishly leaning on his mount Nandi by resting his lower right arm on it. He has matted hair (jata makuta), wears Patra kundala on his left ear and uttariya (a loose piece of upper body clothing) on ​​his waist. His legs are crossed with each other.

Shiva is flanked by the sculptures of two royal couples. All four figures are standing with one of their respective arms raised in adoration. They all face towards Shiva. Only minor variations are found between these two sets of icons. Although scholars have tried to identify these couples with different Pallava Kings, I would not do the same. The period of the monument is still debatable. There is no way that we can conclude on the exact names of the Kings. We can maximumly assume that all three royal couples in this temple depict different Pallava Kings.

The extreme ends (Karna niches) have two Dwaralapalas. With one arm raised in adoration and another arm resting on the waist, both appear in a similar posture. The Dwarapala on the proper right side of Shiva alone wears yagnopavita. A fly whisk (chauri) is placed on the chest of the Dwarapala on the true left side. Additionally, he carries a long sword and has jata makuta and crescent on his head.

A majestic and gigantic Nandi is found to the east of the temple. Being the mount of Shiva, we can assume that it is associated with Arjuna Ratha shrine. 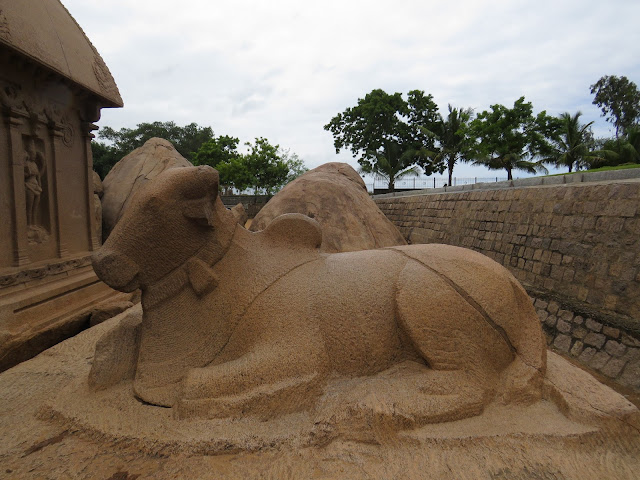 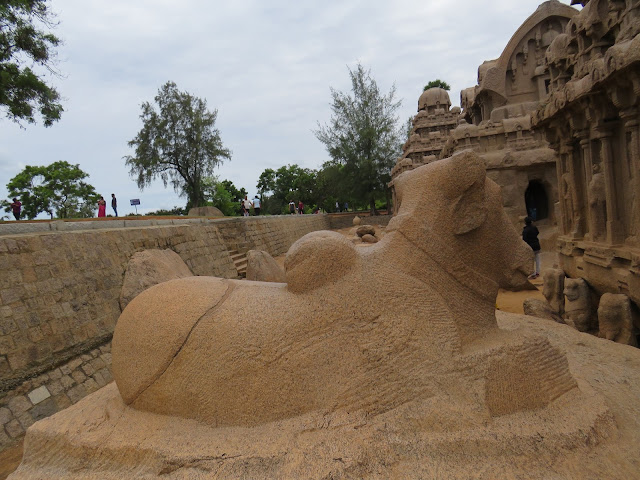 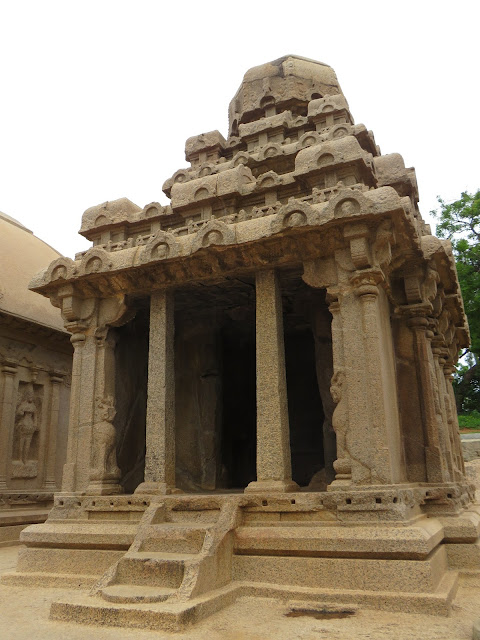