Mamallapuram is filled with experimental monuments of Pallava-era sculptors. Varaha Mandapa is the most complete and ornamental shrine among various cave temples. Four majestic relief panels adorning its walls are the highlights. People named it after the Varaha panel, one of those four relief panels seen here.

The west-facing cave temple has a simple layout with a single sanctum and a front side mandapa.

There are four large relief panels on the mandapa walls, two facing the west, one on the south-facing wall, and the last on the north-facing wall. The mandapa is supported by two pillars and two pilasters.

There are two pairs of Dwarapalas. One pair stands at the entrance of the sanctum. The additional Dwarapalas are found on the sanctum’s south and north-facing outer sidewalls. 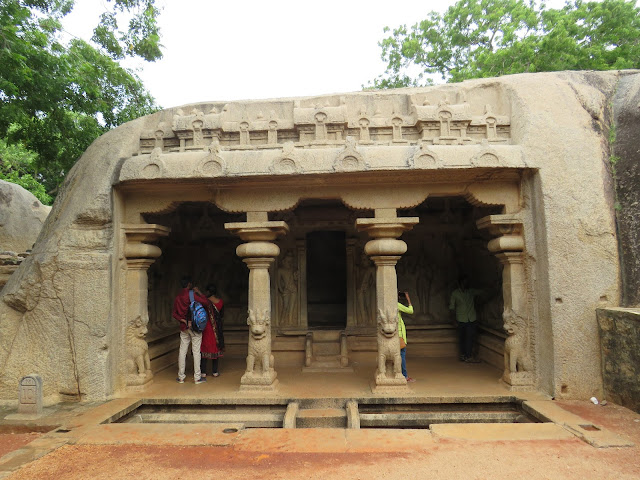 The west-facing sanctum is chopped out in the rear wall and projects out into the mukha mandapa. It can be reached with two rock-cut steps. It is empty, devoid of any icon or painting. Based on the attributes of Dwarapalas (door-guardians), it is assumed to be a Vishnu shrine.

Let me brief on the four Dwarapalas of the sanctum in the next section.

The cornice (kapota) above the four pilasters that support the outer projection of the sanctum has two regular kudu arches with human faces inset. Under the cornice, the frieze of Bhuta Ganas is found. 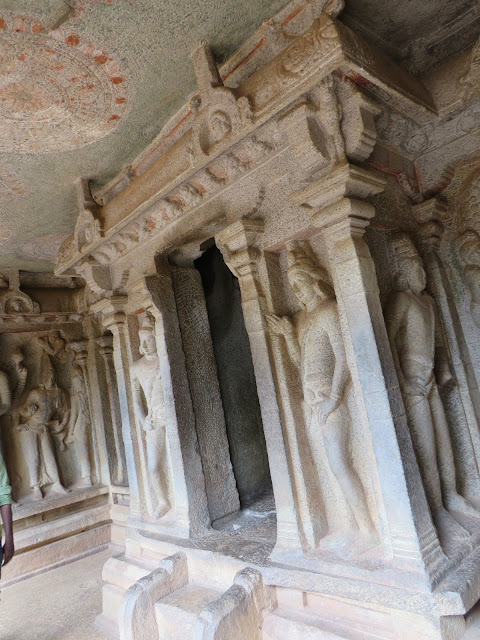 There are two pairs of Dwarapalas, as already mentioned. The first pair is found standing at the entrance of the sanctum. Both wear cylindrical-shaped Patra kundalas in their ears, have kirita makutas on their heads, and have yagnopavitam in upavita fashion on their chests. The Dwarapala on the true right side of the entrance rests his right arm on his waist and has his left arm in Taranjai mudra. The other Dwarapala has his left arm on his waist and has raised his right arm in adoration.

(Patra kundala – Cylindrical ear-ring resembling Palmyra leaf;
Yagnopavitam – Sacred thread worn over the body;
Upavitam – Yagnopavitam that is worn over the left shoulder and under the right arm;
Kirita makuta – The conical or cylindrical crown with a lot of ornamentation;
Taranjai mudra – The gesture of threat;) 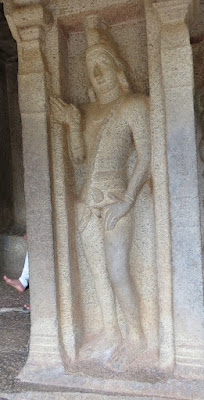 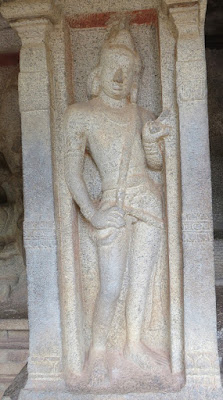 There are two additional Dwarapalas found on the outer sidewalls of the frontal projection of the sanctum. The Dwarapala located on the north-facing niche (Koshta) has his right arm in Kataka mudra and rests his other arm on his waist. The last Dwarapala, who is found on the south-facing niche, is unique. He has both his arms resting on his waists. Unfortunately, his left arm is broken, and hence we cannot clearly see this posture now.

(Kataka mudra – In this posture, the middle and ring fingers are bent to form an arch, with the thumb slightly bent. The other fingers are erect. It might denote holding of some materials.)

When a visitor enters this cave shrine, the relief panel that he or she would find on the left side is an extraordinary composition of Varaha.

Varaha is the boar incarnation of Vishnu. In this panel, Varaha is found to be rescuing Bhumi (the earth) by lifting her up with his two lower arms. Standing firm on his left foot and resting the other foot on the hood of Sesha (serpent), he holds Prayoga chakra (discus) and Shankha (conch) in his upper arms. His face is turned toward Bhumi to his right side. He wears a crown on his head and minimal ornaments on his body. 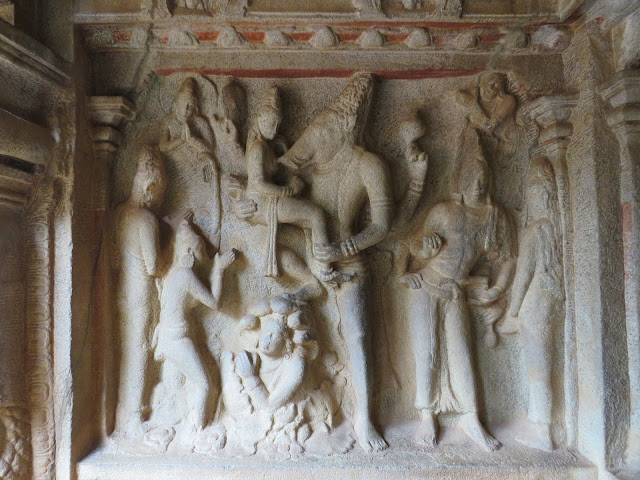 Bhumi is shown seated on Varaha’s right thigh, and her body is too close to his snout.

The four-headed and four-armed Brahma is found standing in Tribhanga posture standing, beside Varaha. (Of course, we could see only three heads in the sculpture). His upper right arm is in kataka mudra. He rests his lower right arm on his waist. What he holds in his two left arms is not clear. This sculpture is slightly damaged and eroded. 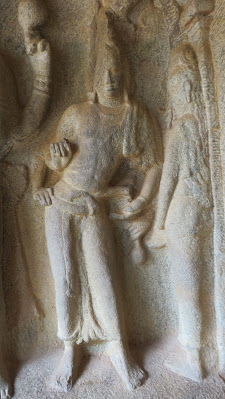 The figure standing behind Brahma, who faces Varaha, might be Narada.

Below the right foot of Varaha, Sesha in the human figure with the serpent’s hood on his top is found. He has his hands in Anjali mudra. 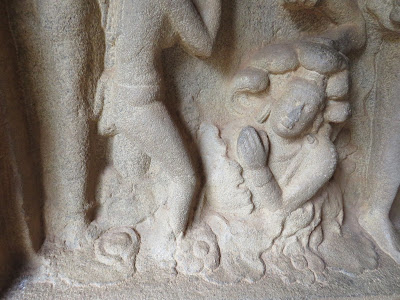 Facing Varaha and Sesha, we find two figures, a sage, and a female. The female has her hands in Anjali mudra. We can assume that she is the consort of the sage. But, I could not identify who this saint couple is. A vertical object found in front of the lady is unclear.

The Sun (Surya) and the Moon (Chandra) are represented on top in the two extreme corners.

(Prayoga chakra – Discus ready to be hurled, with its sharp edge pointed outwards;

Anjali mudra – A hand gesture where the hands are folded together to denote devotion or respect;) 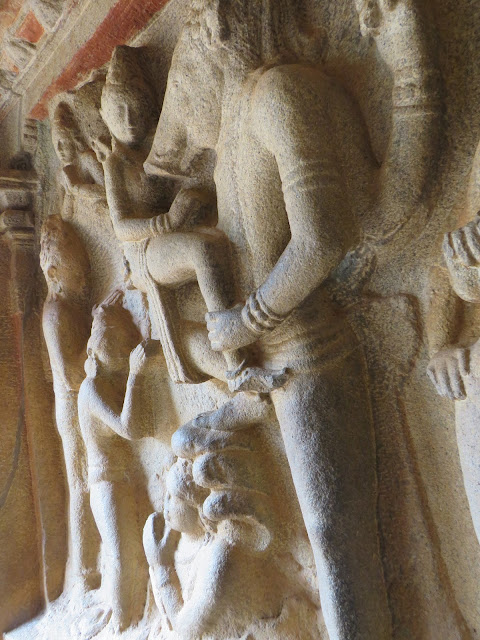 There is Gaja Lakshmi relief panel on the west-facing wall to the true right side of the sanctum. Lakshmi is shown seated on a lotus throne. She has both her arms in kataka mudra, probably to hold lotus. Her legs rest on the lotus leaf below.

She is flanked by four lively maidens, two on each side. Two females near her carry pots in their arms. The other two ladies on the farthest ends hold probably flowers. The arm of one of the ladies is damaged. 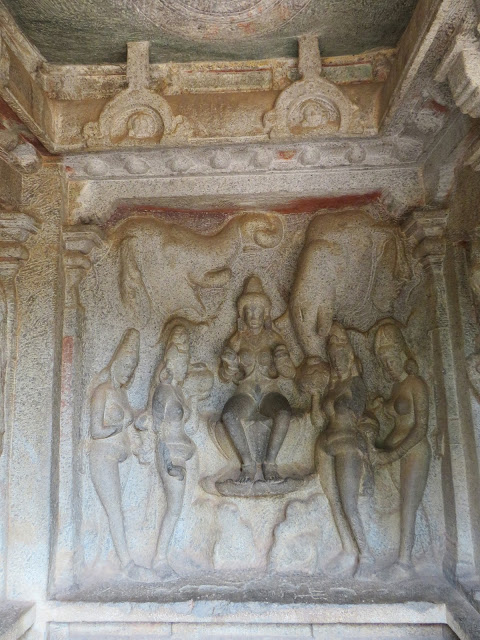 Two majestic elephants are seen on the upper corners. Lakshmi is called Gaja Lakshmi as she is accompanied by elephants (Gaja means elephant). The elephant on the true right side of Lakshmi is pouring down water on her from the pot it carries. The other elephant is probably waiting for its turn to hold the pot.

The whole scene depicts holy adulation done to Lakshmi located in the milky ocean. A similar sculpture is found in Adi Varaha Mandapa too.

Durga’s relief panel is located on the west-facing wall to the proper left side of the sanctum. Known as Kottravai in the ancient Tamil region, the exquisitely sculpted four-armed Durga is seen standing on a lotus. She holds discus and conch in her upper arms and has her lower right arm in Anjali mudra and left arm resting on her thigh. A parasol is seen above her head. She wears a conical crown, breast band, and minimal ornaments. Her sculptures resembles Durga of Draupadi Ratha, with minimal variations.

Lion and deer are associated with Kottravai. They are found on either side of the upper corners. In mid-air, four dwarf Ganas are seen. The one to the left side of Durga holds a curved knife. It is not clear what the other three Ganas hold in their arms.

A male figure seated near Durga’s right foot is seen sacrificing his life by cutting down his own head. This practice of ancient Tamilagam is called Navakandam. As per the practice, the soldiers would chop their bodies into nine parts and offer their lives to Kottravai. The other male figure near the left foot of Durga has raised his right arm in adoration. 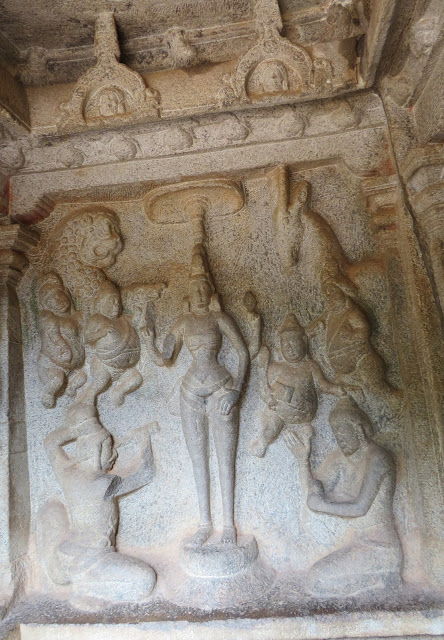 The lateral wall to the viewer’s right side has the majestic Trivikrama relief panel. It would be good to know the legend to appreciate this panel better.

Mahabali was an Asura ruler known for justice. As usual, Indra saw him as a threat to his authority. Again, as usual, Vishnu was readily available to help Indra. He incarnated himself as the dwarf Vamana. When Mahabali conducted a yagna, Vamana sought a piece of land that could be covered by his three steps. Known for charity, the Asura King readily offered the same. Now, the dwarf grew like a giant in size and measured the entire sky and the earth merely with his two strides. Bali offered his own head for the third step, thus fulfilling his promise.

In this relief panel, the gigantic posture of Vamana, called Trivikrama, is depicted. His right leg is firm and erect on the ground, while his left leg is stretched upward. It depicts him measuring the entire earth with his right leg and the whole sky with his left leg. 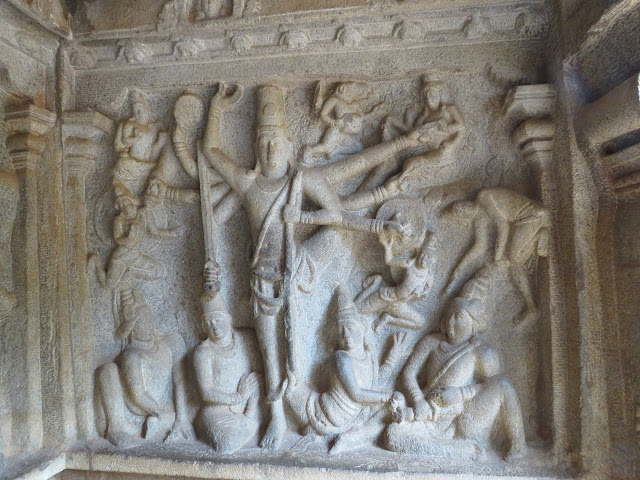 Trivikrama is eight-armed. He holds the sky with his upper right arm so that he can balance and stretch his left leg to measure the same. He has a bow called Sharanga in his left upper arm. It is firmly fixed to the ground, which again helps him balance his body appropriately. He holds a long sword called Nandaka and a shield (ketaka) in his second upper right and left arms. He has a mace (Kaumatika gada) and a conch (Panchajanya Shankha) in his middle right and left arms. His lower right arm holds the discus (Sudarshana chakra). His lower left arm is stretched along his stretched foot to reach the sky.

Near Brahma, there is a bear-faced figure playing drums. He is Jambavan, a prominent character in the Ramayana. The legend states that this divine king of bears circled Trivikrama seven times when the latter measured the sky with his foot. 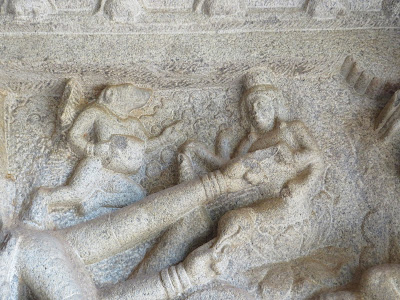 The middle part of the panel has two flying figures with the halo on the back of their heads. They are Surya and Chandra. There is a figure near Surya at the same level, who is shown falling down. He is probably Trishanku.

Although there is no consensus among the scholars, I believe the figure mentioned above must be Trishanku. Trishanku was a king who wanted to attain heaven in his physical form. The sage Vishwamitra helped him in this task. However, Indra, the Lord of heaven, did not allow Trishanku. Hence, Trishanku remained hanging down in the region between heaven and earth, called Trishanku Swarga.

On the lowest level of the panel, four seated men are seen. All of them wear crowns and minimal ornaments. Most scholars mention these four figures as Mahabali and his retinue. However, I have a difference of opinion.

The two figures on the true left side of Trivikrama wear the sacred thread, whereas the other two figures in the other direction do not wear it. Does this indicate that people belong to a different group/clan in each direction?

The figure on the extreme true left side of Trivikrama is calm and composed. However, the person seated next to him seems to be agitated. Hence, I identify the calm person as the generous Bali and the agitated person as his Guru Shukracharya. The legend states that Shukracharya tried his best to stop Bali from offering anything to Vamana.

Now, on closely observing the figures on the other end, we find one of them holding the foot of Trivikrama. He could be identified as Garuda. There is another person seated behind him. He is seen to be calm. He might be someone who would have accompanied Vamana to the ceremony.

The facade of the Mukha mandapa is supported on two pillars and pilasters. Each has a seated Simha Vyala base with a cylindrical shaft, topped with bulbous capital and a square abacus. The cornice is decorated with six kudu arches with lotus inside.

Above the cornice, there is the regular decoration of three oblong-shaped shrines called sala. They are interconnected with the covered pathway called Harantaras (cloisters). The shrines and cloisters have Kudu arches on their top.

The top portion of the interior walls, above the four massive relief panels, has kudu arches all over.

The floral decorations seen on the ceiling and the Vaishnavite symbol of Namam inscribed on the facade are lateral additions. 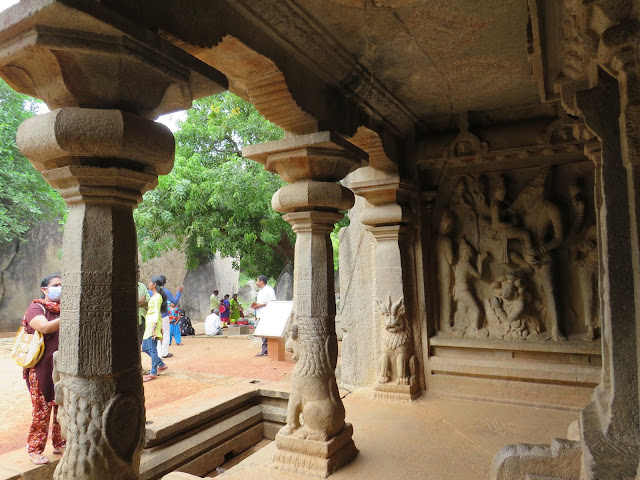 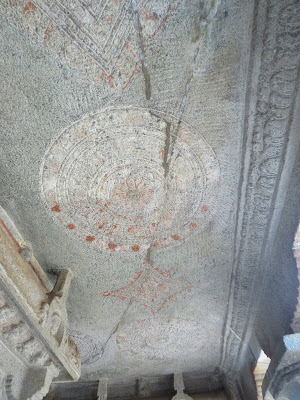