In the recently-concluded K-drama Business Proposal, Shin Ha-ri’s (Kim Sejeong) mother is rather perplexed when Kang Tae-moo (Ahn Hyo-seop) refers to her as mother-in-law (Jangmonim). The picture comes together and she realises that the rich CEO is her daughter’s boyfriend, and that doesn’t stop her from running across the street to hit him with a slipper. K-drama mothers are a little on the extra side, perhaps just like the ones from the Hindi serials; just as dramatic.

Mothers are central to the plot for both; they’re the comfortable space that will later be used against the hapless female protagonist as blackmail, or if they’re from the upper class, they’re venomous, cold and want their sons to stay away from the ‘middle-class’ ( as they’re constantly reminded) bubbly women. In the case of K-dramas, the ‘poor’ mother sits in a neutral dress, finishes her own work during the day, cooks food for her daughter and waits for her to come home. They’ll exchange a rather hilarious banter that includes many hugs to drive home the point that there is joy in simplicity. Some mothers are wonderfully embarrassing, just as they’re warm and welcoming, they know how to Soften the rough edges of the surly young CEO that their daughter will eventually marry. They have the perfect comic timing, unless it’s an intense romantic drama, to a greatly exaggerated effect that somehow just works well. They will do a lot of loud fake crying, while their daughter tries to incinerate them with stares.

Kim Mi-kyung and Park Shin-Hye from The Heirs (Photo: SBS)

They are the ones packing lunch boxes for the man, who is overwhelmed by these gestures. He would be tempted to come for lunch more, and later, during a usual conflict in the romantic tale, the mother would be the one doling out advice. In Forecasting Love And Weather, Kim Mi-kyung, who is every desi mother as she has been trying to get her reluctant daughter married for ages, knocks sense into Song Kang’s Lee-woo and encourages him to resolve his issues and return to Dating Park Min-young. Kim mi-kyung was the best thing about the show. She brought the dose of laughter, as she played the perpetually worried and harrowed mother, chasing random men away from her daughters. In one particular scene, the desi-ness emerges when she realises that her daughter has been ‘living with three men’, and not quite able to compute the idea of ​​flatmates.

In Boys Over Flowers, Im Ye-jin is the over-excited mother, a woman who does laundry for a living. Her humble livelihood doesn’t affect her cheerful persona and she is more than happy when her daughter Koo Hye-sun starts dating Lee Min-ho’s opulent Jun-pyo. She keeps pushing Gum jan-di to the grumpy heir, inducing cringe and embarrassment from her daughter, just like most mothers. 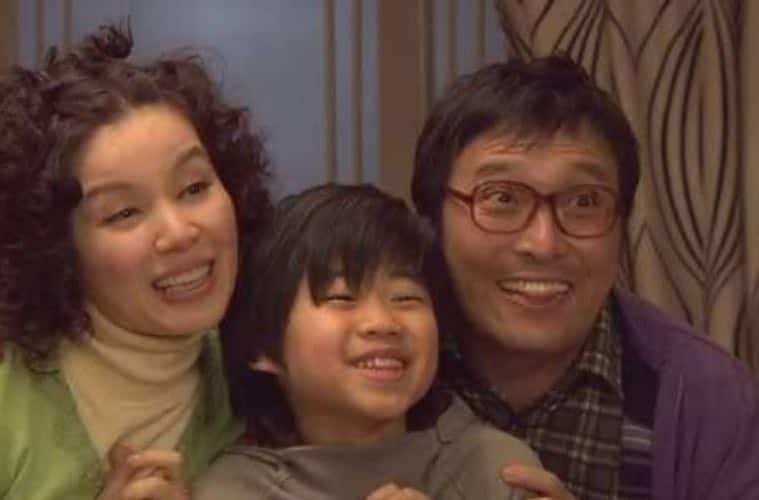 The family in Boys Over Flowers was loud and boisterous. (Photo: Netflix)

In the Heirs, Kim Mi-kyung plays the role of a mother, who is pushed into decrepit poverty and is forced to take up the role of a housekeeper at a mansion. She is mute but that doesn’t stop her from exchanging razor-sharp snark with Lee Min-ho’s rich mother, who is bound to the house due to the complicated family situation.

In the case of the rich mother, she sits on a throne of gold in a palatial mansion, while her staff flocks around her. Rich and successful mothers in Korean dramas have a few options in storylines, either, they usually don’t have much time for their children (because how can a woman balance both hmm?), or they’re just driving their sons away from the girls. The drama is less here, they’re colder, and only at the end of the show does the ice melt. The Heirs, Pinocchio, Boys Over Flowers, Start-Up and even the recent Twenty Five Twenty One, are all shows where a mother was so focused on her career that she ignored her child for years. These are the shows where the rich mothers have a direct impact on the storyline, in What’s Wrong With Secretary Kim, the opulent mom is actually very sweet, we just don’t see much of her. The dialogues are almost the same too in Hindi serials, the only difference is that one is said in Korean. “You think my son will be involved with a dirty girl like you?” “Mera beta koi maamooli chawl-wale ladki se shaadi nahin karega!” There will be many battles–oh, many, many of them–but in the case of the Korean dramas, the show thankfully ends after 16 episodes. The mother would miraculously be redeemed as the 16th or 25th (as in the case of Boys Over Flowers) episode nears. In Hindi serials, you would have to wait for possibly months, or a year for the mother to even remotely change her mind, if at all, that is.

In the Hindi serials, the middle-class mother, clad in a saree is delightfully maternal as she sits in her modest flat, making kheer for her daughter, who is the only breadwinner in the family and hence, has to go to the office. The middle-class mothers in Hindi serials are more philosophical and plaintive; they don’t have too much time to have fun. They’re painted in a far more tragic way, you’re supposed to feel for them instantly. 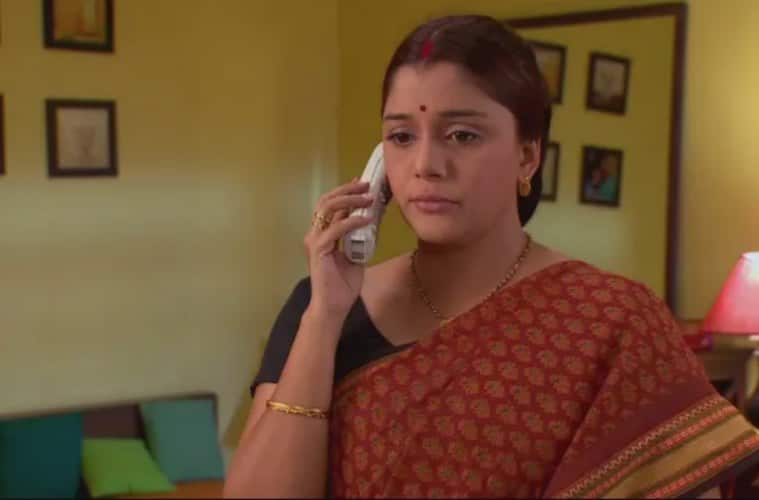 Kshitee Jog as the mother in the serial Navya. (Photo: Star Plus)

They don’t want their daughters to see them suffering – but she will, anyway, the watery eyes don’t escape anyone’s notice. Tyaag (sacrifice) is in all the good women in Hindi serials, a little more than the K-dramas, and they will bear the weight of the world on their shoulders. They’ve seen too much (even before the Hindi serial has properly begun, so you can imagine how the rest of the show goes). There is the same amount of chest-beating and crying in K-drama shows, but this isn’t done for fun, as the blaring background music will tell you. Yet, despite all their sorrows, they will insist that their daughter drinks tea and has ‘nashta‘ which is a plate of rice, dal and ‘aapki pasand ki sabzi‘.

There’s almost a set pattern, with a few variations. The daughter would come home from work and a lot of philosophy will be expounded, about how she must achieve her ‘sapne‘, while her mother starts getting emotional and joyful at the thought of her daughter being so mature. There are so many idioms, that you need to struggle a little to keep track before you get dizzy. The humour is slightly missing here–the Hindi serials just want you to know that they’re simple people and simple people live simply with their simple dreams (count the number of times aam emerges). While, they’re just as warm and welcoming to their daughter’s to-be husband too, and instead of kimchi fried rice, the man will be offered garam chai and pakodas. They’ll usually be on their daughter’s side, when the father gets blistery and apoplectic. Of course, if the father lands up in a hospital and the daughter’s lover’s family is to be blamed, the tearful mother will not hold back from disowning her daughter in front of bewildered doctors and patients.

In the formative Hindi serials from our childhood, namely Kasautii Zindagi Kay, Kyunki Saas Bhi Kabhi Bahu Thi, Kahiin To Hoga, Kahaani Ghar Ghar Ki, the ‘K’ saga that established Ekta Kapoor as the television queen that she is today, the scene shifts to the established and wealthy household, where the mother espouses the same dramatic values ​​and ‘sanskaar‘. Tulsi and Parvati were so righteous and virtuous that it’s a wonder why a burnished halo wasn’t part of their props on sets along with glycerine. These mothers could go to jail numerous times for their children, to the extent that they might even take permanent residence there. 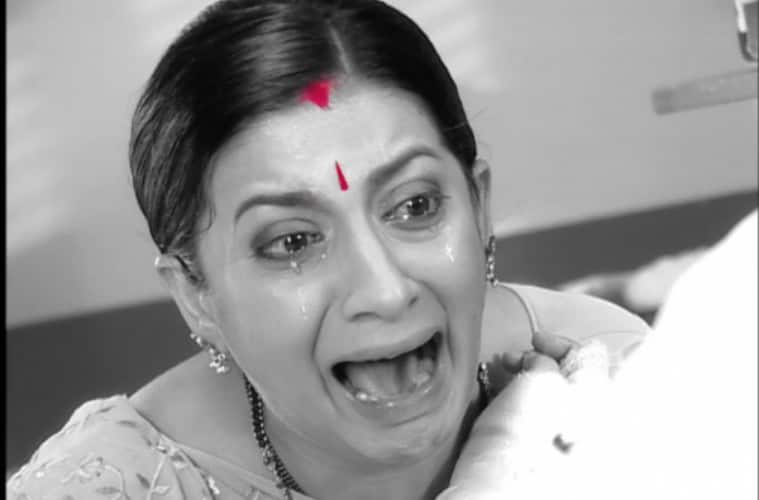 Smriti Irani played the role of Tulsi, the virtuous mother. (Photo: Star Plus)

These mothers are so good that they’ll kill for world peace too. They even have a murderous side. One of the most memed scenes in television history is Tulsi shooting her own deranged son, Ansh. Later Ishita (Divyanka Tripathi) in Yeh Hai Mohabbatein took the same route because her sweet and adopted son suddenly transformed into a ghoulish deviant. K-drama mothers will probably come and find their daughters in jail, because, well ‘tyaag‘.

In Kahiin To Hoga, there was a woeful distinction between the sanskari mother and not so-sanskari mother, as is evident from the sareees. The ‘good’ mother wore full-sleeved blouses and sarees and a sindoor, while the ‘other’ mother enjoyed flaunting her wealth, creating trouble, as she strutted around in sleeveless blouses. Good women in Hindi serials never wear sleeveless, please note. A still from Kahiin Toh Hoga. (Photo: Star Plus)

However, Pyaar Ka Dard Meetha Meetha Pyaara Pyaara in 2012 was an exception, as it showed a more nuanced mother, played by Manasvi Salve. She was fashionable, yes. She didn’t like the girl who her son (Nakuul Mehta) had fallen in love with, but she wasn’t evil. In fact, she turned out to be the biggest cheerleader for her daughter-in-law (Disha Parmar), when it was being doled out to her.

Ah, mothers are almost the same in both K-dramas and Hindi serials, it’s just sometimes a toss to see who tips the drama scales.