The first sign in Kasba Peth that one is near Tambat Ali reverberates through the air — the sound of hammers striking metal with force and without pause. Individual beats merge and undulate in an improvised chorus, the sound growing louder as one enters the workshops where a 400-year-old community of coppersmiths has been working to create copper products, generation after generation.

The original inhabitants had come to Pune in the era of Sawai Madhavrao, when the Peshwas were developing the city as their capital and attracting traders, different kinds of craftsmen and workers to sustain the society — which makes Tambat Ali a living link with recent centuries.

Managing director of Heritage India Communications, Manjiri Khandekar, who has organized walks at Tambat Ali in an effort to educate the people of the city about this part of their heritage, says, “Theirs are hard and tedious work and they are simple people who live in a close-knit community and are dedicated to their art. Over the centuries, the tambats (coppersmiths) have greatly contributed to the cultural life of Pune.” Tambat Ali finds a mention in her recent book, Punyakatha: Pune’s Story of a Million Years. “With technological advancements, older forms of living are threatened but the tambats have survived and evolved till now. They are producing copper products that are in tandem with the demands of today. Unfortunately, not too many in the next generation say they will carry the work forward,” she adds.

At first, there were a few hundred families who had migrated from the Konkan coast and were under the patronage of the Peshwas. According to Sahapedia, “The Twashta coppersmiths claim descendancy from the third son of the mythical Vishwakarma, earth’s creator, and trace their skill to a mythological story in which Goddess Durga demanded that this group learn the trade of working with copper.” The website adds that the coppersmiths who were “patronised by royal families for the manufacture of armours, swords, and copper plates” in Pune established “their small factory-cum-homes in Kasba Peth and held themselves in great pride for having served an empire “. 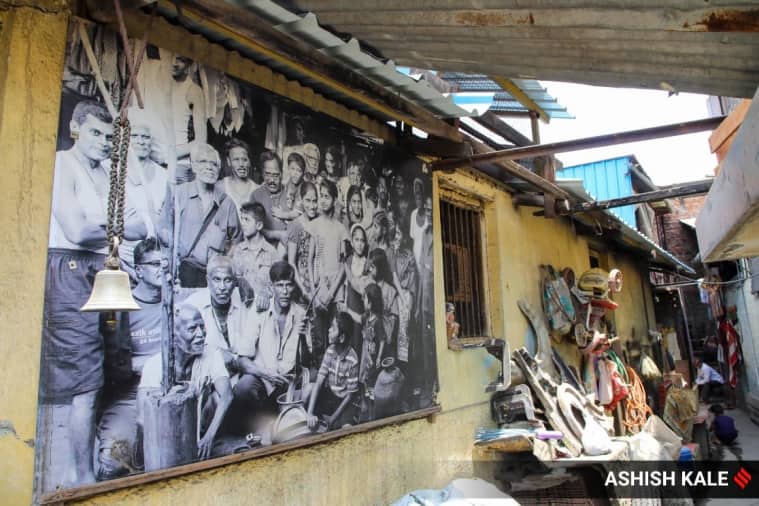 “I found that the families in Tambat Ali have been in the same place their forefathers came to centuries ago. Successive generations have been living on the same premises. Though the younger members have started earning more and some have bought flats in and around the area, in most cases, the eighth or ninth generation lives and works in Tambat Ali. So, we see old houses with a courtyard though you may also see some asbestos sheets that are recent additions. The living spaces of the coppersmiths are very small, and this is where all the work happens,” Priya Krishnan Das, a city-based illustrator and sketcher of urban landscapes, who travels and documents culture, tribes and traditions through sketches, told The Indian Express in February 2021.

Behind the closed doors of the houses lies the domain of the women, who do not participate in the workshops. Das says, “The women run the show in the background. While there is no rule that restricts women from becoming coppersmiths, there are none who have taken up the profession. While their husbands and sons are at work, the women contribute by running the household, cooking, washing, cleaning and also helping the men to polish the copper wares. They take care of the major work so that the men can focus on creating copper wares.”

Today, Tambat Ali is where sleek copper glasses, bottles, water filters and artefacts for religious festivals, such as Ganapati idols in eco-friendly clay and PoP, are made and supplied across the city. But, in the corners of the workshops, there are piles of giant deghs, kalsis and other vessels that speak of an older form of life when households opted for handmade and heavy copper utensils for regular use. Vikrant Dakhave, a commerce graduate who is a third-generation coppersmith with his brothers, points to a copper glass with a dent. “This is machine-made and tends to be light and dents easily if it falls. On the other hand, the products we are making are constantly hammered and toughened.”

He adds that it used to be louder at Tambat Ali before. In his forties, Dakhave has memories from his youth when 25 families lived in a cluster and “there was work happening everywhere”. “There are 10-12 families now,” he says. Satish Narayan Nijampurkar, whose paternal grandfather had come in 1890-1895 from Nizampur near Raigad, recalls that at one time there were 180 workshops, which has now dwindled to 40, and hereditary coppersmiths are very few.

“Earlier, we could buy copper sheets between Rs 700 and Rs 800 per kg. Now, the price is around Rs 800 and, if you want pure copper, the rate is Rs 1,000. As a result, if a vessel weighs 12 kg, we have to price it between Rs 10,000 and Rs 12,000. The market is down because people cannot afford these rates and there are many cheaper alternatives,” he says. “There was a time when the price of copper would change once or twice a year but now it changes regularly with the stock market.” Nobody here is surprised that the younger generation is not entering the workforce but is opting for other employment opportunities. “I doubt if Tambat Ali, as we have known it, will be around in another five years,” says Dkhave.

At present, when the sun rises, the first sounds of the hammer reverberate through Tambat Ali. Nijampurkar says that 80 per cent of the artisans “wake up, freshen up and get to work” while the remaining take a bath, offer prayers and then sit at their copper work. “Work goes on till 5 pm, after which we participate in other activities, such as visiting their library and reading,” he says. The Twashta Kasar Wachan Mandir, operated by the Twashta Kasar Samaj Sanstha Trust, has been operational for more than 100 years and boasts of more than 50,000 books in English and Marathi in genres ranging from fiction and non-fiction to biographies and history. “The library was open to everyone, not just their community people, and this shows how progressive and foresightful they have been. Outside the library in the evening there were senior citizens chatting and reading the newspaper,” says Das.

Nijampurkar adds that the library is popular among students and readers of the community. “There are different ways to consolidate a society, from religious and social rituals to reading and learning. Our community is very intelligent and learned, so a library is as essential for us as food is to our bodies,” he says.