A temple where lights are magically snuffed out, one dedicated to Radha because her idol appeared under a Jamun tree here, and one with a shivlinga the Pandavas had worshiped. Two things unite these temples—they are all located in Old Delhi and they were all built during the Mughal era, flourishing then and since then.

Recently, writers Rana Safvi and Sam Dalrymple turned the lens on many of these temples. Dalrymple photographed the temples and both posted the pictures on social media, with short descriptions drawing from the research Safvi did for her book, Shahjahanabad, The Living City of Old Delhi.

Shahjahanabad, built by Shahjahan, is today known as Old Delhi. In the narrow, cramped bylanes of Old Delhi, the past, the present, and the eternal find easy co-existence, each burnishing the other.

The many Mughal-era temples of Shahjahanabad have the same quality. Their structures have been built over and rebuilt. Their histories are inextricably mingled with myth and magic. They are located in busy lanes, near salwar kurta shops and aata chakkis. Devotees flock here, as they did hundreds of years ago. The tiny temples stand firm, sure of their place in history and in the present.

For Safvi and Dalrymple, the project began when they visited one such temple, Charan Das ki Baghichi, near Chawri Bazar.

“This temple was built during the reign of Mohammad Shah (1719-1748). During our visit, we realised a recent renovation had covered up a part of history – what were possibly the oldest Vaishnav frescoes in Delhi had been painted over. This was when we decided to do a series on some Mughal-era temples in Old Delhi. There are over a 100 such temples, but aren’t very well-known,” says Dalrymple.

In her book, Safvi writes that Charan Das was a saint of the Bhakti movement, and his sect did not believe in the caste system. The Mughal emperor held him in high esteem, even giving him an endowment of four villages.

The temple is dedicated to Radha and Krishna. In a domed pavilion within the complex is the saint’s feet impression in marble. 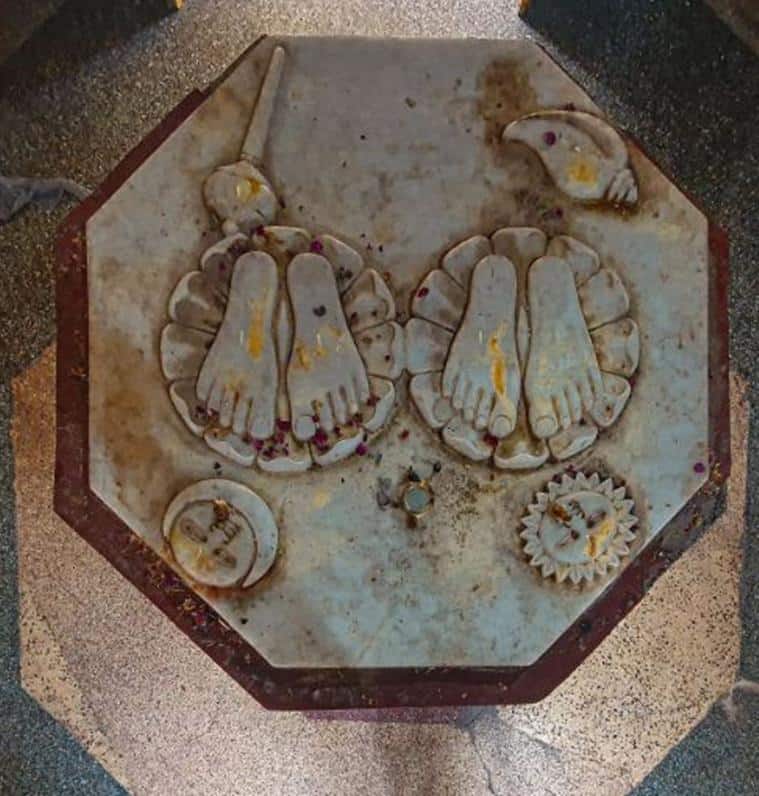 In his Instagram post about the temple, Dalrymple writes, “Muhammad Shah came to the throne only 12 years after the death of the puritanical Aurangzeb… Muhammad Shah’s interactions with Hinduism could not have been more different. He developed a close relationship with Sant Charan Das, a Bhakti ascetic from Alwar…”

Safvi says the presence of temples in Old Delhi points to the social and economic prominence of the Hindus and Jains in the Mughal era. “Jain bankers, traders and soldiers from Hindu and Jain communities were important elements of the Mughal economy and administration. Some of the most exquisitely preserved structures in Old Delhi even today are its Jain temples,” she adds.

Historian Swapna Liddle says many of the temples show a Mughal influence, featuring onion-shaped domes with a kalash or an earthen pot on top. “When Shahjahan built his capital, he invited Jain traders to settle in the Dariba area. Many of these temples came into being from personal patronage, and even today, are managed by families and trusts,” she says.

Safvi says for her, “these temples embody a wonderful spiritual energy.” “Through our series, we wanted to highlight a beautiful part of our heritage,” she adds. 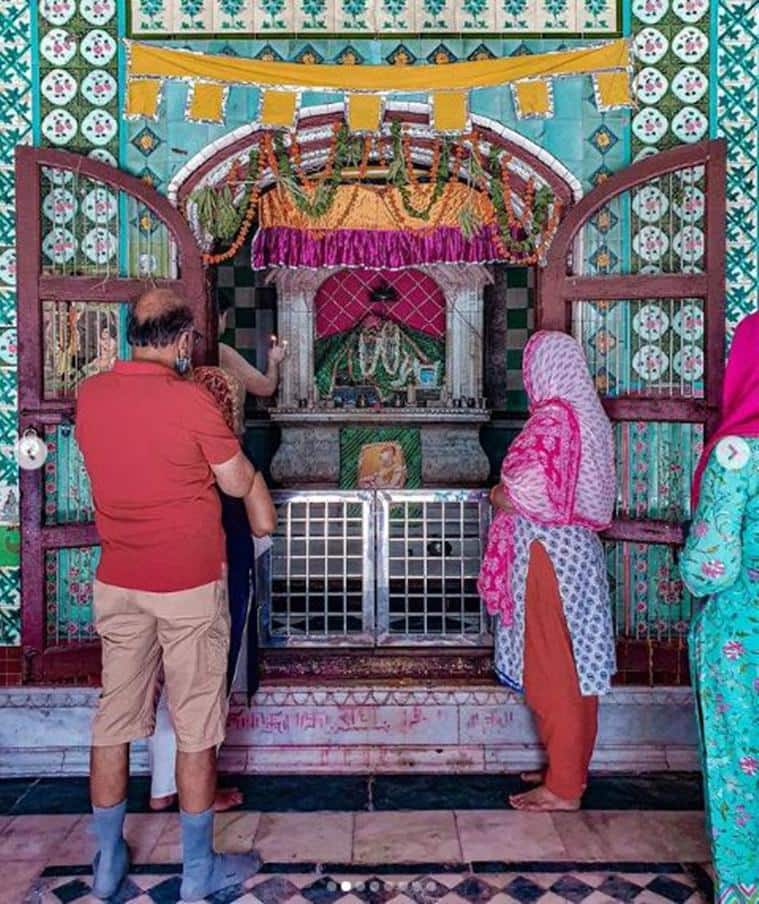 This temple is located in a narrow lane in Katra Neel, named after the indigo traders who once lived here. Dedicated to goddess Radha, the temple was built around 1750, during the reign of Ahmad Shah Bahadur. Along with Radha and Krishna, it also houses a smaller idol of Lalita Sakhi, one of the principal friends of Radha.

While some say the temple was built by Naval Goswami Pradyumanji, a saint and Krishna devotee, others credit his son, Vanshi Ali ji, with the construction. The current caretaker of the temple is Seema Goswami, who says her family is descended from the first Goswami.

According to legend, Lalita Sakhi in a dream suggested to Vanshi Ali that he should go to Barsana (near Vrindavan) and pray. While engrossed in his prayers, he had a vision of Radha telling him he could find her near the place he was born.

“Vanshi Ali ji returned home to find that an idol of Radharani had appeared under a Jamun tree. This is the idol we worship to this day, following all rituals observed at the biggest Radha temple, in Barsana,” Goswami tells indianexpress.com.

When indianexpress.com Visited the temple, the idols – Radha’s in brass, Krishna’s in black marble – were being readied for the evening aarti. The temple is located in the courtyard of a large house, which the Goswami family shares with tenants. The Jamun tree is no longer there. As preparations for the aarti started, on the other side of a courtyard, a woman plugged in her washing machine. “Is samay machine laga rahi ho (you are washing clothes at this time)?” her neighbor asked her.

Goswami says they get no help from the government and are keeping up the temple on their own. Amid all these, rituals, prayers, and life go on. Another unique temple in Old Delhi is dedicated to Baba Lalu Jas Raiji, considered the ‘kul devta’ or the family deity of the Khatri community. Apart from the temples in Katra Neel and Chhipiwara in Old Delhi, the other prominent shrine dedicated to this deity is in Dipalpur, Pakistan. The Katra Neel temple has an idol of Baba Lalu Jas Raiji, which is always kept covered. Next to it hangs a large fan made of silver. In the complex is a Shivala or temple dedicated to Shiva, with a shivlinga and a Nandi idol. It is hemmed in from all sides by a cement building.

In one corner sits Pandit Satprakash Tiwari, with his three little grandchildren. He has been the temple priest since the 1980s.

Dalrymple writes on Instagram, “According to the Sanskrit inscription in picture 4 [of his post]Baba Lalu Jasrai Shivalaya was built by Lala Changamal during the reign of Akbar Shah II… The marble was brought from Red Fort by a devotee.”

Tiwari, however, says the shivala is 551 years old, while the rest of the temple was built later.

“Not many know the legend of Baba Lalu Jas Raiji. Centuries ago, Raja Sri Chand Khanna was worried he had no heir. His priest prayed to Ma Bhawani at Hinglaj mountain, now in Pakistan. The goddess gave a boon that sons would be born to two of the king’s three queens, but they must never be scolded. However, a few years later, the third, childless queen scolded the children while they were playing. The divine kids disappeared into the earth, but blessed the queen that she would have a son who would take the Khanna clan to great heights. The temple honors the divine sons, which is why the face of the idol is covered.”

Every year, the temple holds the janeu (sacred thread) and hair-cutting ceremonies for the two children. Baba Lalu Jas Raiji Mandir is hemmed in from all sides by a cement building. (Source: Instagram/travelsofsamwise)

In the busy lane outside, as Tiwari said, not many know of the legend of Baba Lalu. But they do know that “Khanna logon ke devta hain (He is the Khannas’ god). One shopkeeper helpfully adds, “Ask the priest if you really want to know. Online mat padhiyega, galat hoga (don’t read up online, the information will be wrong).”

Very close to this temple is Ghanteshwar Mahadev Mandir, hosting an ancient shivlinga. A says “it is impossible to guess how old the temple is” and the shivlinga, even older, is “the one the Pandavas had once paid obeisance to”.

Larger in scale and better preserved than these temples are two Jain mandirs in Old Delhi. The first, Lal Jain Mandir, is right opposite the Red Fort. The temple is bustling with devotees, and within the compound is a hospital for birds. There are many shrines inside the temple, with idols of the 23rd Tirthankar, Parshvanath, and Lord Mahavir. The walls and ceilings have breathtaking murals in brightly colored floral patterns, like those found on paper mache boxes. Those who ask about its history are given a printed sheet with a highly action-packed narration of the legends around it.

One of these legends says that during the reign of Shahjahan, a Jain soldier had an idol of Tirthankar Parshvanath, which he worshiped inside the military camp. Soon, many Jain soldiers started gathering here and the military tent was converted into a temple, which Jain traders later gave a grand form. However, historian Liddle says this is likely to be just a story, and the temple was built by traders. Further inside Old Delhi is another Jain temple, and because this is Old Delhi, the 1807-built structure is called ‘Naya Mandir’ (new temple). This temple opens only in the mornings because no lights are allowed inside.

Dalrymple writes on Instagram. “Raja Harsukh Rai was the Imperial Treasurer of the Mughal Court…Temples weren’t allowed Shikharas in Shahjahanabad, but Harsukh managed to persuade Akbar II to let him build a towering Shikhara over his temple… Today the temple has one of the best preserved Mughal Interiors in Delhi… No electricity or diyas are allowed in the mandir. According to legend, any attempts at lighting were magically snuffed out.”