Like the classic Led Zeppelin song, we’re over the hills and far away — literally in the foothills of the Himalayas. And we are here to talk about an equally lofty car in the Mercedes Benz portfolio.

No, we’re not talking about the S-class. In fact, we are talking about the baby S-class. Or as most people call it – the C-Class. Since 1982, the C-Class has become a very big cog in the great Mercedes Benz wheel. It serves as a gateway for many people to the premium brand. And over 5 generations, the C-Class has become one of its icons. As Siddharth also put it in his review, things have become sportier and edgier. But that’s not why it is called the baby Benz. It doesn’t share the powertrain of the S-Class, it doesn’t look like an S-class and definitely, it is not as big as an S-Class. So why is it called the Baby S-Class, because the technology that underpins it is derived from the S-class?

The new-gen C-Class gets an 11.9-inch touchscreen infotainment system

Perhaps the biggest telltale sign that things have been borrowed from the S-Class is the presence of the magnificent 11.9-inch central infotainment screen which is at an angle. This screen is starkly similar to the S-Class and a huge upgrade from the horizontal screens that Mercedes has provided in the past which are still part of many other vehicles in its portfolio. This screen is stunning in any way one looks at it – great colours, super responsive and just a big wide canvas. 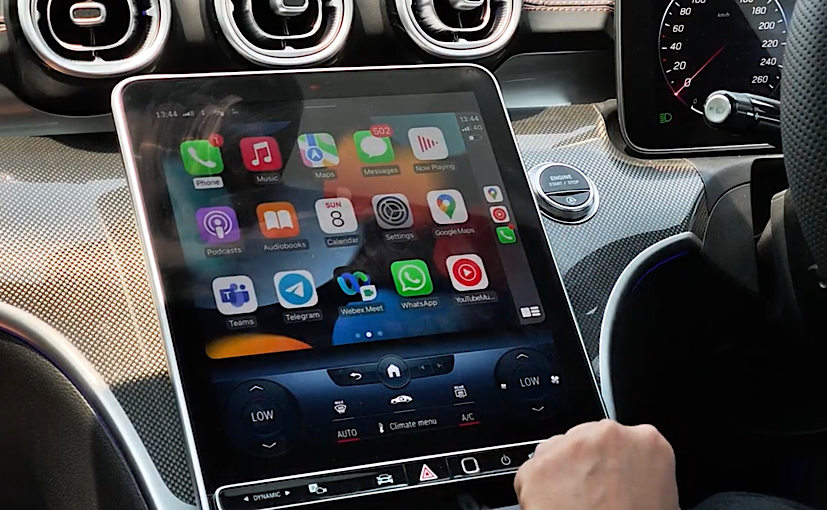 It has wirelss Apple CarPlay and Android Auto

Perhaps, the only issue would be that it is a ginormous fingerprint magnet. This screen is home to the MBUX 7 – or in other words the cutting edge version of the Mercedes user experience that has already been seen in the S-Class and the Maybach. It is typified by a litany of tech features like V2X connectivity where the car is embedded with the cloud and in real time traffic data and contextual information around the surroundings. It gets wireless Apple CarPlay and Android Auto and maps by Here. These maps are decent and provide contextual information as well, but when compared to Google Maps, they aren’t as reliable. This is something we experienced first hand in Mussoorie as sometimes it gave wrong directions. Mercedes has also developed its own App platform and speech recognition is a huge deal in this car using voice commands almost anything can be done. 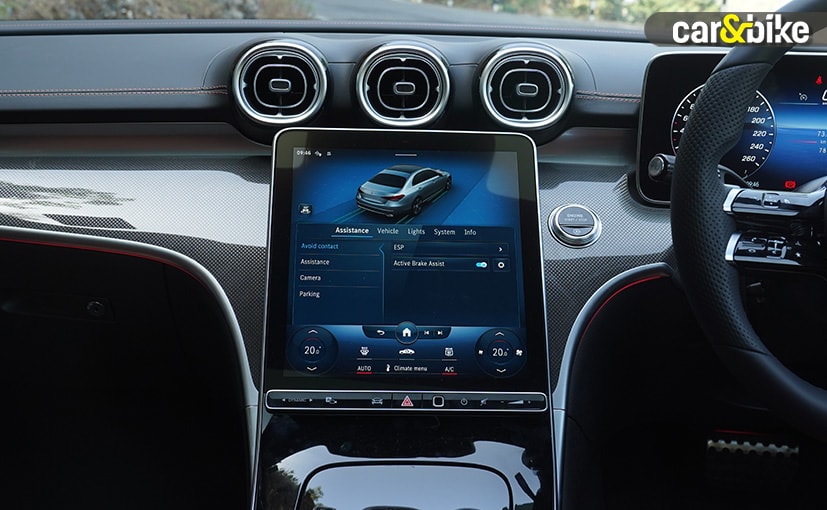 But as good as MBUX is, it comes with its own set of follies. For example, because it is so feature-rich the design of these icons is not modern at all. These icons remind you of Windows Media Player from Windows Vista. That was in 2006 and here Mercedes is talking about the metaverse. But I must admit it works pretty nice as these are large touchpoints as there aren’t many buttons out here this is the best you can do. Then, there are multiple steps involved in everything. Basically, multiple taps are involved. Heck if you want to open the sunroof, you have to swipe like this still it is not a seamless experience. Even the volume rocker .. well there is no rocker, it is a slider. It is not intuitive I believe, but still, it is there. 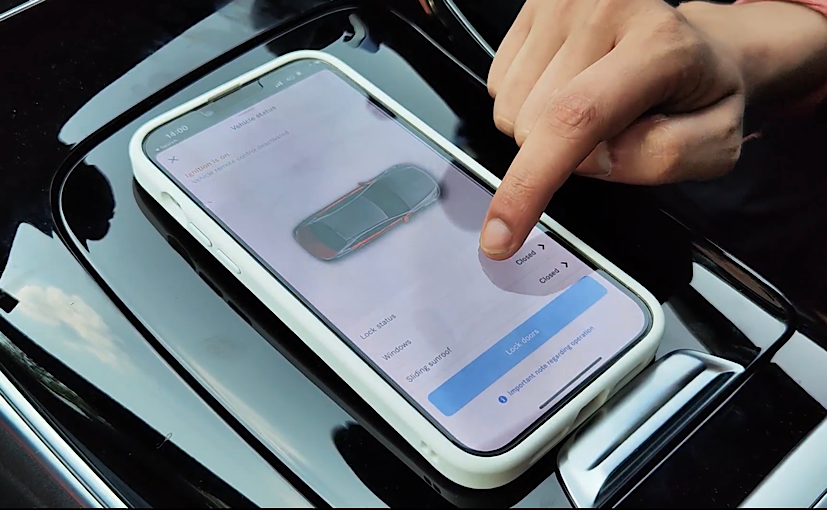 The C-Class gets prodigious connected car chops thanks to the Mercedes Me app. The Mercedes Me app is quite slick – it supports multiple profiles which provides plenty of personalization features. For example, it will adjust the seats according to your height, it will remember those settings apart from helping you how to tune the sound of the Burmester sound system, the ambient lighting and whatnot. Of course, this is also a connected car which means it supports driver telematics, and geofencing and also supports remote car unlock – basically standard staples of a connected car stack. What was impressive was that despite poor connectivity, we faced very low latency and all these features largely worked up in the hills. The functionality of Mercedes Me also ties in with speech recognition which also parses some data off the cloud – and it was largely working if it understood your accent. 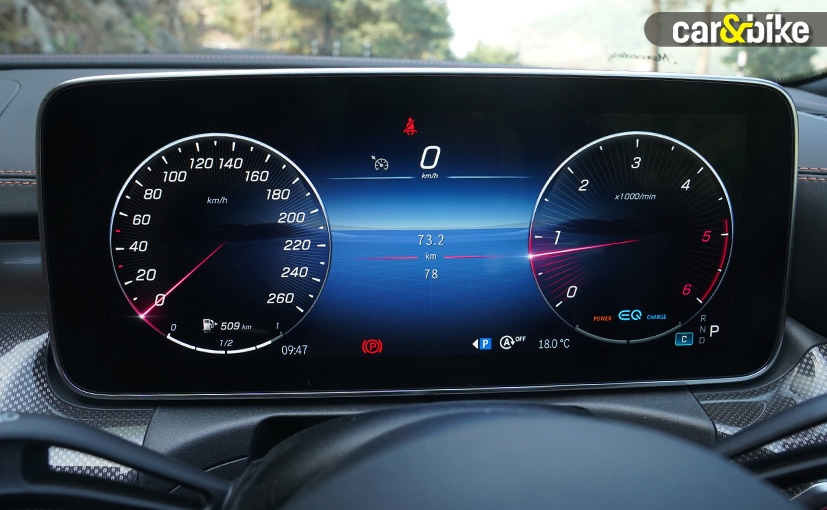 The virtual infotainment display can be customized with themes

As mentioned before, Mercedes talks a big game about voice commands – which is a bit of a hit or miss affair. What really irks me is the fact that voice is also used as a form of biometrics. You can unlock the car by just using your voice and if it doesn’t recognise it, then you have to fall back to the fingerprint scanner which admittedly works really nice, just like any smartphone. But this should be more buttoned in, it should feel more like what you get on an iPhone with Siri or with the Google Assistant on an Android phone. But it is clearly not there, but the hope is in time it will get there and it will understand the accent more accurately. Then all the hoopla around the V2X technology – doesn’t make sense for the Indian consumer because a) we are not yet a 5G market. This technology needs the hyperfast latency-free connectivity of 5G to work optimally. That may happen soon if India gets 5G next year. From that aspect it is future-ready but still, only S-Class or Maybach get the same functions and clearly, there aren’t many of those cars on the road and even this car is not going to sell in the millions in India. So it may not have that much of relevance but indeed it is a nice feature; The car will be more integrated with the infrastructure – the roads, fellow Mercedes cars, the cloud, other gadgets and all the information will be presented contextually and be updated in the car in real-time. 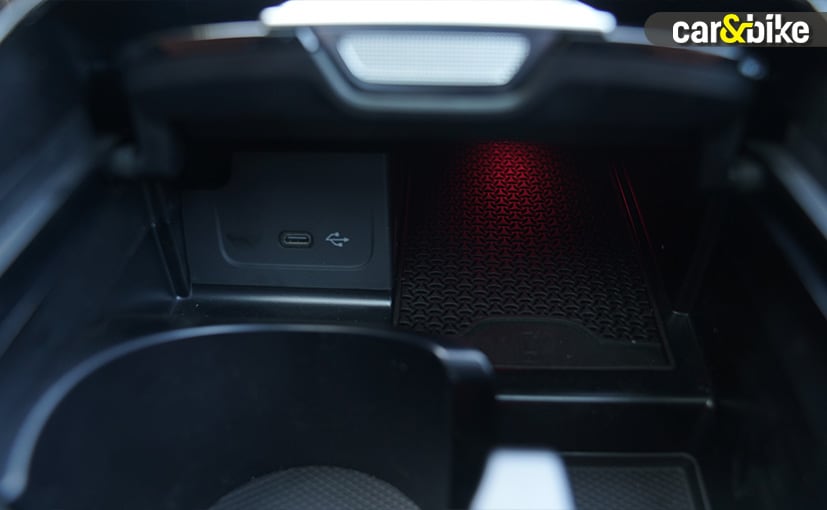 Mercedes has also amped up the ADAS capability for the C-Class. It comes with an assortment of cameras and sensors that all provide spatial awareness while you’re driving. Considering we were on the tight and twisting winding roads of Mussoorie, and the car by Indian standards is still quite large, we managed to drive it without much of a hitch as the indicator on the infotainment display shows with clear graphics if anything is around the car – be it a 2 wheeler, a pedestrian, a car or even a cow. This system, however, is quite sensitive, which is quite normal. There are automatic emergency brakes as well which come very handy while you’re driving on the highway. There are assistive indicators for overspeeding as well and the car has a sophisticated ESC system. It also gets a sophisticated parking camera that has dynamic gridlines and also it helps out with voice-guided instructions. There is also a wireless charger that’s quite inconveniently placed, alongside three USB type C ports – one near the cigarette lighter, two inside the storage space in the front row armrest. Mind you, considering this is the baby S-Class, there is nothing on the back row – not even in the armrest. This is a big miss in my opinion. The Burmester sound system is impressive, but I have heard better systems

More goods here. The C300D variant which we are driving gets a Burmester sound system that has been inspired by the S-Class. It has 15 speakers and over 700 watts of power. That is staggering. On top of this, it gets 3D audio as well. Now the sound signature is quite neutral but you can easily dial in your sound to your heart’s content and the sound system will really sing. At the same time, it is not the absolute best. 3D audio is a bit gimmicky, it adds a bit more flavour to the surround setup but mostly opens up songs which have got a very bassy vibe and lack a bit of detail in the mid-range and treble. That’s a nice thing to have. Overall it is a pretty nice system to have and it is superior to the one there on the C200 and the C200D The C200 notably only gets a 4 speaker setup which is just shocking for a car of its price point.

There is not even an iota of doubt that the new C-Class builds upon the lineage of the iconic W201 from 1982. It also lives up to the billing of being the baby S-Class as most of the tech it gets is basically from the S-Class – be it the ADAS, the connected car suite, the sound system, the infotainment display – it is all derived from what most people call the best car in the world and that is NEVER A BAD THING! That being said, one thing is clear, this is a driver’s car, so while there is a lot of tech that has been borrowed from the S-Class, it is all in the front row, but there are slim pickings in the back row – just keep that in mind before buying this. The new C-Class starts at Rs 55 Lakh ex-showroom for the C200 and goes all the way to Rs 61 Lakh for the C300D which is the car I tested for this tech review.