The military leadership Sunday ruled out the rollback of the Agnipath scheme, even as thousands of aspirants continue to protest across the countryand many Opposition parties also lent their support to the protesters, asking the government to rethink or rollback the new policy.

A few hours after their meeting, Lt Gen Anil Puri, Additional Secretary, Department of Military Affairs (DMA), headed a press conference, along with the topmost officers for personnel in each service.

Terms and conditions released by the Army Sunday, and a detailed document issued by the Air Force earlier mentioned that “Agniveers would form a distinct rank” in the Indian Army and the Air Force, “different from any other existing rank.” Also, the services noted, “To encourage and recognize the dynamism of youth, a distinctive insignia will be worn by Agniveers on their uniform during their engagement period.” Compared to the 90 days of annual leave that troops get in the existing system, Agnivers will be eligible for only 30 days in a year. Also, they won’t be allowed to leave the services before four years.

Warning those aspirants who want to join the services under the scheme, Puri said during the press conference that Those who are participating in the protests and indulging in arson or vandalism will not be recruited. Military is based on discipline. There is no space for arson or vandalism,” he said. 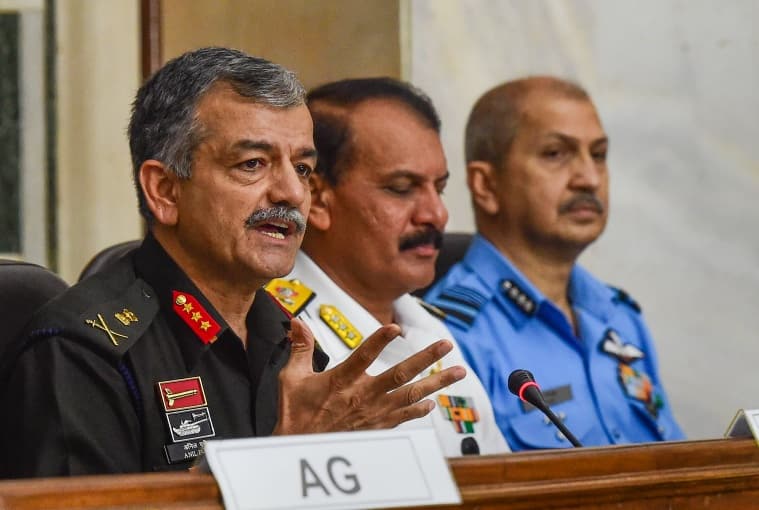 “Every individual, who wants to join Agnifer, will have to pledge that he has not participated in the protest, or vandalism.” Puri said, adding that as “police verification is mandatory” even in the existing system, those who are mentioned in FIRs won’t be able to join as Agniveers. (PTI Photo)

Puri further said that “anger can be expressed” but, peacefully, in discussions. He also claimed that the protestors have been “instigated” by two kinds of people. “Inimical elements, and those who run coaching institutes… have a huge contribution in sending them to the streets,” the officer said.

“Every individual, who wants to join Agnifer, will have to pledge that he has not participated in the protest, or vandalism.” Puri said, adding that as “police verification is mandatory” even in the existing system, those who are mentioned in FIRs won’t be able to join as Agniveers.

“I request the protesters, don’t waste time. Qualifying the physical (tests) is not easy,” Puri said. He mentioned that they have around 45 days to 60 days before the process commences, giving aspirants time to be “physically prepared.”

He said many who are protesting have crossed the age limit, and are not eligible for recruitment. Asked if the military had anticipated the magnitude of protests, Puri replied, “we did not anticipate” as it is “not our job”. He said that it is an “issue of law and order” and “someone will tackle it”.

“Our aspiration is to bring change,” he said. Puri added that several reports had suggested having a younger military since 1989, to “instil youthfulness” but it couldn’t be done earlier. “This was our own aspiration. Not done because someone said,” he said.

Asked if the policy could be rolled back, Puri said, “No. Why should there be a rollback?”

He also mentioned that even candidates who had cleared some stages of the recruitment in the last two years, whether physical or medical, will have to re-apply under the new policy, as all recruitments will only happen through Agnipath.

Puri said that the announcements made by the government regarding the reservations for the Agniveers in Central Armed Police Forces (CAPF), Assam Rifles, Coast Guard, Defense Public Sector Undertakings, and in other departments, were all planned, and are not a response to the protests. He also said that the only tweak done by the military was the one-time age relaxation, so that those who missed out on recruitment in the last two years — as no recruitments were made owing to the — can avail an opportunity.

Puri said that it was mentioned in the Kargil Review Committee’s report that “a large number of jawans are in their 30s and officers are getting command much later than in the past. The age factor has become worrisome.” He said that the military “needs a youthful profile”.

The policy was “studied for two years,” Puri said, under General Bipin Rawat, as the country’s first Chief of Defense Staff, and the three services chiefs who have now retired. Before finalizing the structure, he said, models of other countries were also studied. “In all countries it was seen that the average age was 26-28 years (in the military),” he said. Puri added that almost all countries have “multiple entry and exit avenues.”

“This was a very engaged process. It was discussed at all levels, and this was an optimum solution,” he said. It will be a mix of gradual induction, as in the first year it will only be 2 per cent of the military, which will go up to 10 per cent by the end of four years, Puri said.

During this time, he said, there will be “minor tweaking in training, and their utilisation.” Till then, the military and the government will hold discussions, also with the industry, for their future after their tenure.

“We need youth,” Puri said, as they can “take more risks,” and have “junoon and jazba” which needs to be captured. He mentioned that the current Sepoy to Non Commissioned Officers (NCO) ratio is 1:1.28. Through Agnipath, he said, it will come down to 1:1, and will improve the teeth-to-tail ratio of the military forces. It will bring an “ideal mix of youthfulness and experience.”

Over the next four years, 50,000 to 60,000 recruits will be taken every year by the three services, Puri said, adding that with time this number will increase to 90,000 to 1.2 lakh. “Training infrastructure will need to be enhanced,” he said.

Speaking about the announcements made by various ministries on how they will assist the Agnivers after their four-year tenure, as the lack of job security is a driving factor among the protesters, Puri said that these were all planned. “Reservation announcement was planned. It is not a reaction to the protests,” he said.

The day after the new recruitment policy was announced, the Home Ministry said that it will give priority to Agniveers in CAPF, which Puri said showed the intent. “Just three days later, on Saturday, Home and Defense ministries announced 10 per cent reservation for Agniveers, which is the action,” he said. He said the military has requested all the states as well to consider similar steps for induction of the Agnivers into their state police forces.

“All this was planned,” Puri reiterated. Regarding the bridging courses, he said, modalities are being worked out. By the time the first batch of Agniveers complete their tenure, Puri said, all these modalities will be finalized and codified to help them.

The personnel in-charge officers of the three services announced the schedule for kick-starting the recruitment processes. Army’s Adjutant General Lt Gen C Bansi Ponappa said that it has already published its terms and conditions, and the draft notification will be published by Monday. By July 1, he said, registration should begin at all centres, and the rallies will begin in the first half of August.

The induction for training will happen in two lots, after rallies are held from August to November. In the first lot, 25,000 Agniveers will be inducted, and the training will begin in the first or second week of December, he said.

For the second lot, the training will begin in the first half of February 2023. Approximately 40,000 Agnivers will be recruited by the Army this year, through 83 rallies. “All states will be covered. We will endeavor to touch every last village in the country,” Ponappa said.

Navy’s Chief of Personnel Vice Admiral Dinesh K Tripathi mentioned that they will issue their advertisement by June 25 and the process will start online. “Within a month we will start the steps needed for recruitment,” he said, adding that the training of the first Agniveers in the Navy will begin by November 21.

He reiterated that for the Navy, the Agnivers will be gender-neutral and women will also be inducted.

Regarding the Air Force, which will begin its recruitment process earlier than the other two services, Air Officer-in-Charge Personnel Air Marshal SK Jha said that the process will begin from June 24, and they will start training their first batch from December 30 .