Prime Minister Narendra Modi on Saturday said that during the eight-year-long reign of the NDA government, he has not done anything nor has allowed anyone even inadvertently to do acts that would shame citizens of the country, while trying to build the India dreamt of by Mahatma Gandhi and Sardar Vallabhbhai Patel.

Addressing a public meeting after inaugurating the KD Parvadiya Multispecialty Hospital in Atkot village of Gujarat’s Rajkot district, Modi reminded the gathering that the government at the Center completed eight “eight years of service to the nation” on May 26. He thanked the people of Gujarat for teaching him values ​​and sending him to Delhi eight years ago.

“Thanks to the values ​​you taught me, the education that you gave me, the lessons that you taught me as to how one should live for society, I didn’t hold back in serving the motherland over the past eight years. It is [thanks to] the sanskar (value) of yours, this soil and the pious land of revered Bapu and Sardar Vallabhbhai Patel that in eight years, I have not let anything happen even by mistake nor have I done anything myself as would make you or any other citizen of the country hang his head in shame,” he said.

Modi said that during his eight years as prime minister, he made honest efforts to create an India dreamt of by Mahatma Gandhi and Sardar Vallabhbhai Patel, the first home minister, who is known as the Iron Man of India. “Revered Bapu (Mahatma Gandhi) wanted an India which empowers every poor, Dalit, deprived one who is suffering, our brothers and sisters from tribal communities, our mothers and sister; Where cleanliness and health are parts of the way life, whose economy is powered by indigenous solutions,” he said.

Modi said that by following the mantra of sabka sath, sabka vikas, sabka vishwas aur sabka prayas, his government at the Center had given a new impetus to development while according to top priority to the welfare of the poor. “Pukka houses to three crore families, 10 crore families freed from the compulsion of defecating in the open, nine crores women saved from the smoke (of conventional stoves), electricity connections to more than 2.5 crore poor families, piped water to six crore households , Rs5 lakh’s worth of free medical treatment to 50 crore Indians—these are not mere statistics but the proof of our commitment to help the poor become proud,” said the prime minister. Modi said that during his eight years as prime minister, he made honest efforts to create an India dreamt of by Mahatma Gandhi and Sardar Vallabhbhai Patel. (Express Photo)

Modi also said that during the Covid-19 pandemic, his government gave free ration to the poor, provided financial assistance to the poor through Jan-Dhan bank accounts, testing and treatment facilities to those who contracted Covid-19 and free vaccines to all.

The prime minister said that now, his government had launched a campaign to ensure that benefits of government welfare schemes reach every intended beneficiary. “Whoever is eligible for a right should get it. When the target is to take schemes to every citizen, discrimination is eliminated and leaves little scope for corruption, nepotism and discrimination along the lines of caste and region. Our government is working hard to take to saturation levels the schemes aimed at providing basic amenities,” said Modi, adding, “We are encouraging state governments repeatedly to do the same and are helping them in this respect. This initiative will empower the poor and the middle class of the country and make their lives easier.”

The KD Parvadiya Hospital was constructed at a cost of Rs 50 crore by Shree Patel Seva Samaj Trust, a charitable organization in which Gujarat BJP vice-president Bharat Boghra is a managing trustee. Chief Minister Bhupendra Patel and a host of Union ministers and state ministers were present at the inauguration ceremony. “I am happy that Matushree KDP Multispecialty Hospital has been inaugurated today. This hospital will help make healthcare services in Saurashtra better,” the prime minister said, adding, “When people’s efforts are synthesized with government initiatives, our capacity to serve increases manyfold. This modern hospital in Rajkot is a big and the best example of it.”

The hospital will treat people free of cost under the Ayushman Bharat scheme of the Center and Mukhyamantri Amrutam scheme of the state government and at subsidized charges for diseases not covered under these insurance schemes. Referring to the BJP government in the state and the NDA government at the Centre, Modi said the “double-engine government” was removing all hurdles to take the development of the state to new heights. 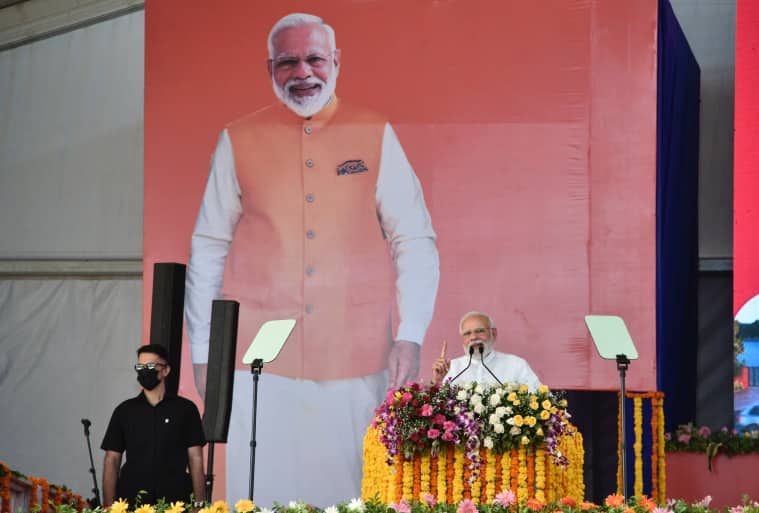 The prime minister said that now, his government had launched a campaign to ensure that benefits of government welfare schemes reach every intended beneficiary. (Express Photo)

“Before 2014, there used to be such a government in Delhi as would see only Modi in project files and not the projects. It will lose its composure and stamp the files as either canceled or rejected. They had blocked all types of projects. They had blocked our mother Narmada. For constructing the Sardar Sarovar dam, we had to sit on a fast,” said Modi.

The prime minister also said that the health education sector in the state had undergone a massive transformation.

Modi also said that infrastructure in the state was also being upgraded at an speed and scale. “There used to be times when one talked about industries, one would be talking about the strip from Vadodara to Vapi. Our industrial development was concentrated on either side of the national highway there. Today, you go into any corner of the Gujarat and you would find small and big factories and industries teeming with activity,” said Modi, while referring to the auto-parts manufacturing industry of Gujarat, the tile manufacturing industry of Morbi, brass-parts industry of Jamnagar, pharmaceutical industry of the state, among others.