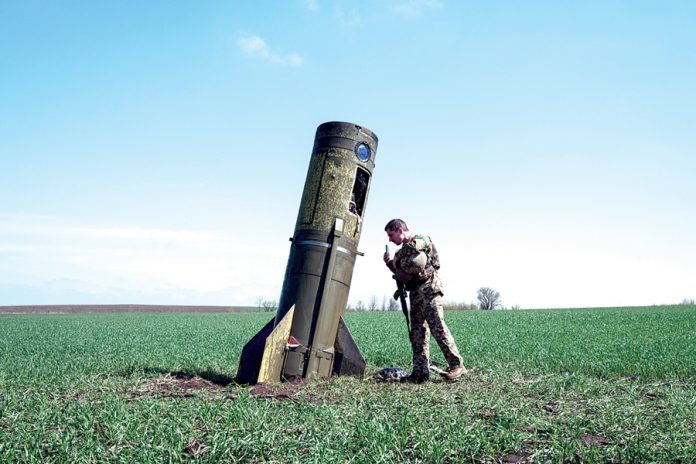 Forces strike crucial infrastructure far from frontline of its offensive

Kyiv: Russia unleashed a string of attacks against Ukrainian rail and fuel facilities on Monday, striking crucial infrastructure far from the frontline of its eastern offensive, which Britain said has yet to achieve a significant breakthrough.

Meanwhile, two fires were reported at oil facilities in western Russia. It was not clear what caused the blazes.

As both sides in the 2-month-old war brace for what could be a grinding battle of attrition in the country’s eastern industrial heartland, top American officials pledged more help to ensure Ukraines prevail.

In meetings with President Volodymyr Zelenskyy in Kyiv on Sunday, the American secretaries of state and defense said Washington had approved a $165 million sale of ammunition for Ukraine’s war effort, along with more than $300 million in foreign military financing.

“The strategy that we’ve put in place — massive support for Ukraine, massive pressure against Russia, solidarity with more than 30 countries engaged in these efforts — is having real results,” Blinken told reporters in Poland the day after the meeting.

“When it comes to Russia’s war aims, Russia is failing. Ukraine is succeeding,” he added.

Speaking on Monday to top officials at the Prosecutor General’s office, Russian President Vladimir Putin said that the US and its allies have tried and failed to “split Russian society and to destroy Russia from within.”

When Russia invaded on February 24, its apparent goal was a lightning offensive that would quickly take the capital and perhaps even topple the government in Kyiv. But the Ukrainians, aided by Western weapons, bogged Putin’s troops down and thwarted their push to Kyiv. Moscow now says its focus in the eastern region of the Donbas, but one senior military official says it also wants to control southern Ukraine. While both sides said the campaign in the east has begun, it has yet to gather steam.

A small group of Ukrainian troops holed up in a steel plant in the strategic city of Mariupol are tying down Russian forces, and keeping them from being added to the offensive elsewhere in the Donbas, Britain’s Ministry of Defense said Monday.

Over the weekend, Russian forces launched fresh airstrikes on the steel plant in an attempt to dislodge the estimated 2,000 fighters inside. An estimated 1,000 civilians are also sheltering in the steelworks, and the Russian military pledged to open a humanitarian corridor Monday for them to leave.

Mariupol has endured fierce fighting since the start of the war because of its strategic location on the Sea of ​​Azov. In addition to freeing up Russian troops, its capture would deprive Ukraine of a vital port and allow Moscow to establish a land corridor to the Crimean Peninsula, which it seized from Ukraine in 2014.

But for now, the British Defense Ministry said that Russia has “yet to achieve a significant breakthrough” since shifting its focus to the Donbas. Ukrainian forces have repelled numerous assaults in the past week and “inflicted significant cost on Russian forces,” it said.

Instead, Russian missiles and war planes struck far behind the frontline of that offensive on Monday.

Oleksandr Kamyshin, the head of the state-run Ukrainian Railways, said five railway facilities in central and western Ukraine were hit early Monday, including a missile attack near the western city of Lviv.

Serhiy Borzov, the Governor of Ukraine’s central Vinnytsia region, said there were consequence after rocket strikes targeting “critical infrastructure.” It was not clear if that referred to the attacks on the railways.

Meanwhile, a major fire erupted early Monday at an oil depot in a Russian city about 100 kilometers from the Ukrainian border, Russia’s Emergencies Ministry said. No cause was given for the blaze.

The oil depot in Bryansk is owned by a subsidiary of the Russian state-controlled company Transneft, which operates the Druzhba pipeline that carries crude west to other European countries. It wasn’t clear if the depot was part of the pipeline infrastructure and whether the blaze could affect those deliveries.

The ministry said in a statement that the huge blaze damaged a depot containing diesel. It noted that the region has enough diesel for 15 days.

A Russian news report said that another oil storage facility in Bryansk also caught fire early Monday, and the cause wasn’t immediately known.

In a video address Monday, Zelenskyy described his meeting with US Secretary of State Antony Blinken and US Defense Secretary Lloyd Austin as “encouraging and, importantly, effective.”

The Ukrainian leader added that they agreed “on further steps to strengthen the armed forces of Ukraine and meet all the priority needs of our army.” Earlier, he praised US President Joe Biden for his “personal support.”

The three-hour meeting came Sunday, the 60th day since the start of the invasion, as Ukraine pressed the West for more powerful weapons against Russia’s campaign in the Donbas, where Moscow-backed separatists controlled some territory before the war.

With Russia’s shift in focus, Austin said Ukraine’s military needs are changing, and Zelenskyy is now focused on more tanks, artillery and other munitions.

Asked about what the US sees as success, Austin said that “we want to see Ukraine remain a sovereign country, a democratic country able to protect its sovereign territory, we want to see Russia weakened to the point where it can’t do things like invade Ukraine.”

As Blinken and Austin left Ukraine, UN Secretary-General Antonio Guterres was scheduled to travel to Turkey on Monday and then Moscow and Kyiv. Zelenskyy criticized Guterres for visiting Russia before Ukraine.

Blinken said he had spoken with Guterres on Friday ahead of the trip.

“Our expectation is that he’s going to carry a very strong and clear message to Vladimir Putin, which is the need to end this war now,” he said.