Television serials have led us to believe that a ‘saas-bahu‘ combination, especially in the kitchen, is a lethal mix of masala politics and cold stars.

But if the success story of this Gurugram-based family is anything to go by, a mother-in-law and her daughter-in-law can get along just fine. They can, in fact, even cook up magical recipes and win the hearts of food lovers from different parts of the country.

Meet 35-year-old Manjari Singh and her 58-year-old mother-in-law Hiranyamayi Shivani, who started The Chhaunka homemade Bihari food cloud kitchen in 2021. They call themselves “passionate, wholehearted, and purpose-driven”, having started an “unplanned business” in the pandemic, which prevented them from visiting their hometown in Bihar.

Stirred by the idea of ​​bringing a slice of their native place to Gurugram, Manjari and Hiranyamayi decided to open a cloud kitchen, which would also cater to many others like them, who live “outside of their hometown”, but yearn for a “home” -like feeling.

In a recent interaction with indianexpress.comthe entrepreneurs — who are now considering opening more kitchens in Delhi-NCR, Mumbai, Pune, Goa, Bengaluru and Jaipur — discussed their journey, their love for Bihari foodwhat the cuisine chiefly comprises, challenges faced in the pandemic, among other such things.

Whose idea was it to start ‘The Chhaunk‘, and why did you decide on Bihari cuisine?

My mother-in-law and I are both from Patna. Setting up this business was not something we had planned, but during the lockdown, my mother-in-law was unable to return to her hometown.

Similarly, many immigrants were unable to visit their hometowns for months and must have missed out on amiable dinners. Because she enjoyed cooking, an idea occurred to her to supply food to individuals who live outside of their state, and provide them with a home-like feeling. We assisted each other and foundation ‘The Chhaunk‘ that brings homemade Bihari cuisines to the doorstep.

Bihari cuisine is rarely found in every restaurant. So many people from Bihar live all around the country and hardly get enough to eat. Another motivation for launching this enterprise was to address this issue. We also want to reach out to non-Bihari foodies who are eager to try new cuisine.

As Indians, we’ve grown up listening to stories about food. Food has brought us together to build memories. [We wanted] to bring street stories to life via food and the distinctive flavors of Bihar.

Tell us why you decided on the name, ‘The Chhaunk‘.

In every Bihari kitchen, ‘chhaunka‘ is the most widely used word. ‘Tadka‘ is the name given to it by north Indians. Biharis don’t eat unless there is a chhaunk of oil and a full spice mix; otherwise they find it insipid. Every Bihari associates it with the sound coming from the kitchen before lunch or dinner: ‘Chhaunka laga ki nahi?‘.

‘Chhaunka lag gaya‘ denotes that the dish is ready to be served. With all this in mind, we have named the cloud kitchen, The Chhaunk.

What does a standard homemade Bihari food menu include?

We only serve traditional Bihari food from Bihar’s chowks, and this is the foundation of our business. Sattu kachori, puri and sabjiBihari chicken curry, Champaran meat mutton, sattu ka sharbatstreet snacks like jhalmuri, chura matar, etc., are some homemade menu items. Other than traditional Bihari cuisine, there is no other typical menu available. We established this cuisine to provide homemade Bihari food to everyone, not just food connoisseurs. In India, we have seen a sizable number of people who haven’t tasted Bihari food. After seeing the extensive gap, we started working on a mission to bring this cuisine to the masses.

What are some of the lesser-known facts about Bihari cuisine that you would want people to know?

When it comes to Bihari food, most people outside of Bihar are only familiar with litti-chokha. Bihar has a lot of traditional food that is not well-known, and because we are from Patna, we have decided to educate people about this cuisine. There are a lot of other dishes like sattu puri, dal puri kheer, bhnja tash, bajkaalong with endless options in sweets like parwal rasgulla, thekua, khazaetc.

You are a ‘saas-bahu‘ duo sharing kitchen chores. Normally, we only hear about saas, bahu and kitchen politics. Tell us about your equation with each other.

Hiranyamayi and I, as women, are building a Bihari entrepreneurs food ecosystem where no one has reached. Our relationship is our strength. As saas-bahu, we uplift and compliment each other. We are establishing the same business, serving the same cuisine, and living under the same roof; but we have separated our work and responsibilities to manage a successful cloud kitchen without any mess. I [Manjari] manage The Chhaunk from a business standpoint. Since Hiranyamayi has a love for cooking, she looks after the recipes.

You decided to start this cloud kitchen during the pandemic. What kinds of challenges did you face?

The initial challenge was that since this business was not pre-planned, we were not aware of how to run it. We were aware of the gap and the solution, but the execution was key. Gradually, we learned the process and started delivering food on time.

Secondly, Bihari cuisine is not widely spread and consumers are not too exposed to the authentic style of food preparation; sometimes they find it different from their expectations. Another challenge is keeping the food style homely, and not making it commercially fancy. After witnessing enthusiasm, support from clients, we decided to extend the kitchen into new outlets.

Chhaunk’s first customer was a non-Bihari neighbor who ordered Champaran meat mutton. The first person who ordered was our family friend, a non-Bihari living far from his family in Delhi. He once ate food prepared by my mother-in-law, and after he got to know about our venture, placed an order with us. He now orders food regularly. We have seen an increase in our online orders from both Biharis and non-Biharis.

Tell us about the Covid protocols you follow while preparing, packaging, and delivering food.

Since Covid cases are rising again, everyone is concerned about their safety. Being a hygienic cloud kitchen, we have kept all of the protocols in mind when sourcing materials, and producing and delivering meals. We use sanitizer, a face mask, and a hair net when preparing meals, and we also provide a weekly briefing to the staff on the necessity of food hygiene. The meal is the same as what you would find in any Bihar house.

You have plans to expand this kitchen to other cities. Do you think the chefs you hire will be able to put the same love and taste into the food?

So far, we have launched four outlets: Manesar (Sector 52), Gurugram (Sector 85), Gurugram-South City-1, and Dwarka (Delhi). In the next 3 years, we plan to open more than 50+ outlets across India. Within the next year, we will be fully operational in Mumbai, Pune, Goa, Bangalore, Jaipur, and other areas of Delhi-NCR. 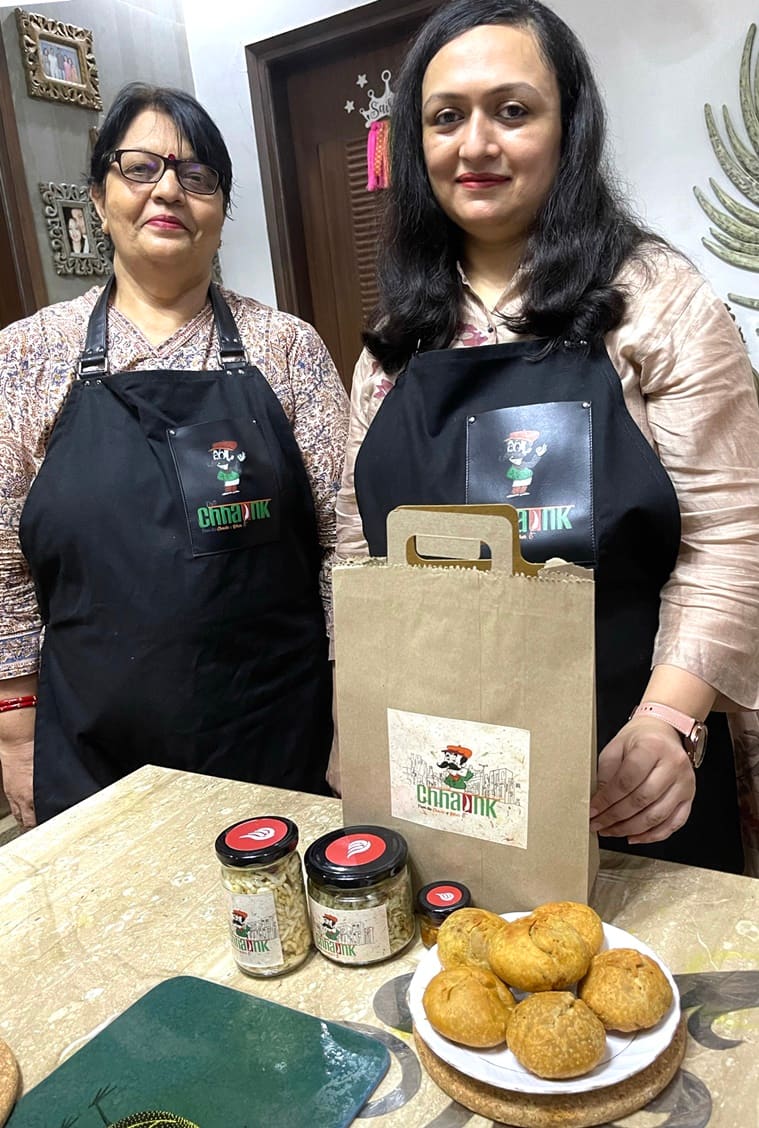 Customers can use The Chhaunk eco-friendly food packaging for plantation purposes as well. (Photo: PR handout)

To provide the meal with the same affection and taste, we are very much inspired by the homemade spices that almost all Bihar home kitchens use. We have specialized chefs for regional cuisines who will follow the exact recipes given by my mother-in-law. They are keen to learn.

Between the two of you, who is a better cook?

We are both good at Bihari cuisine, but a mother’s recipe will have a lot of essence, including peacefulness and a plethora of love. Hiranyami is a better cook, and I just give feedback and input as and when required; she really is the mother of Bihari recipes. That is the reason we are both looking after two different verticals.

Tell us more about the eco-friendly packaging.

We are committed to being a 100 per cent green company. We have partnered with Favola for food packaging material, which contains no plastic and is 100 per cent biodegradable. Furthermore, we use glass packaging to give lead-free, safe-frozen, and leak-proof food. Customers can use The Chhaunk eco-friendly food packaging for plantation purposes as well.