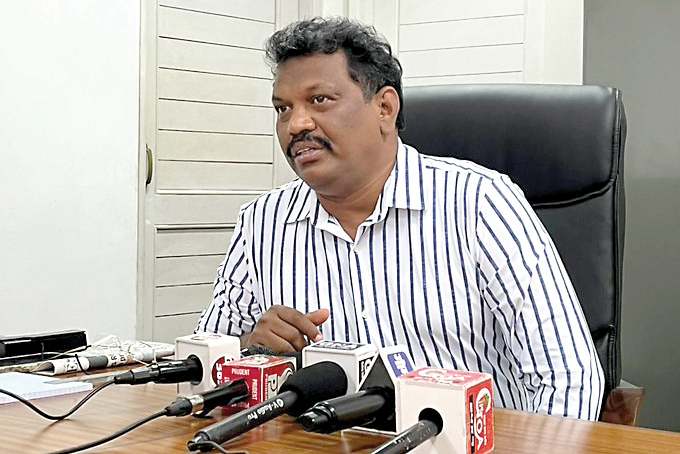 No will violations be allowed, says TCP Minister Vishwajit Rane

Panaji: The battle between the Town and Country Planning Minister, Vishwajit Rane and the leader of the Opposition, Michael Lobo over the Outline Development Plans (ODPs) reached the next level on Thursday with the North Goa Planning and Development Authority (NGPDA) issuing show -cause notices to the Calangute Congress MLA and others over alleged illegalities in the construction of Nazir Hotel and Baga Deck in Calangute.

The show-cause notices issued by the NGPDA directed Lobo and others to produce the necessary documents within seven days of the failing notices which action would be taken, which is demolition of the said structures.

Rane said there have been gross violations of law in the construction of these two hotels in Calangute and thus the show-cause notices have been sent to the owners. “As long as I am there as the TCP Minister, no violations will be allowed. Nobody can be above the law. I will see that these hotels are demolished during my tenure as TCP Minister,” Rane said. The Minister also said all the deeds of Lobo during his tenure as chairman of the NGPDA will come up on the floor of the House.

Meanwhile, the Town and Country Planning (TCP) Board, which met on Thursday, arrived at various decisions during its 180th meeting.

Rane, who is the chairman of the TCP Board, informed that the Board has decided that the ODPs of Panaji, Mapusa, Kadamba Plateau and Mormugao shall now be prepared by the TCP Department, and the TCP Board shall exercise such powers as PDA would exercise under Section 33 of the TCP Act.

As regards the suspended ODPs of Calangute-Candolim, Parra-Arpora-Nagoa and Mormugao, Rane said a final decision shall be taken within ten days after the receipt of the report of the review committee.

The Minister further informed that the decision about eco-sensitive zones/ tenanted lands converted into developable zones shall accordingly be taken.

“Local area development plan shall be prepared for certain towns/villages that are fast developing. A detailed plan for the same areas shall be prepared,” he said, adding that Transferable Development Rights (TDR) benefits shall be given to the properties that are classified as private forests and those that are low-lying areas. ‘Receiving areas’ shall accordingly be identified and guidelines/criteria shall be framed by the sub-committee of the Board to designate such ‘receiving areas’, the Minister said.

“The Goa (Regulation of Land Development and Building Construction) Regulations will be amended to revise the regulations prescribed for auditing of buildings post occupancy and time limit to conduct such audit shall be extended to more than five years. These powers are now vested with the local authorities only and the same powers shall now also be given to the TCP Department and the PDAs for effective enforcement,” the Minister said.

Rane also informed that parking regulations will be revised to encourage additional parking provision by exempting additional stilt floors from floor area ratio (FAR) calculation. At present, only one floor is exempted from FAR calculation, which shall now be changed to two stilt floors. Maximum height of a building shall also be relaxed to accommodate such additional stilt parking floor, he said.

The Minister further said the provision of amenities such as toilets, rest rooms etc shall now be made compulsory for housing projects for the benefit of security personnel, drivers etc and administrative directions in this regard have already been issued. “There are several properties for which zones are not earmarked due to cartographical errors and the same will be corrected by assigning proper zones. A proper study of these properties will be conducted for the purpose,” he said.

Rane also informed that all heritage sites as mentioned in the regulations will be earmarked on Regional Plan and development control line/regulated area around these monuments as prescribed under various provisions of law shall now be marked on the Regional Plan of Goa 2021 for clarity purpose.

The Minister also said that regarding the issue of change of zones affected for Zuari Agro Chemicals Ltd, a report has been sought from the Mormugao PDA and thereafter necessary action would be taken.

‘Suspension of ODPs is sending a wrong signal’

Panaji: Leader of the Opposition and Calangute MLA Michael Lobo on Thursday claimed that the action of the Town and Country Planning (TCP) Minister Vishwajit Rane suspending the Outline Development Plans (ODPs) of Parra, Arpora, Nagoa, Calangute, Candolim and Vasco is sending a wrong signal because of which the investors and the business community are scared to invest in Goa.

Breaking his silence on the TCP Department’s action, Lobo questioned as to how the same officers who had approved the plans are now canceling them.

“The ODPs were approved by the Bharatiya Janata Party-led government and by the same officers including the Chief Town Planner Rajesh Naik, who have now canceled them. The ODP of Parra, Arpora and Nagoa was approved when Chandrakant ‘Babu’ Kavlekar was the TCP Minister, Francisco Silveira was chairman of the North Goa Planning and Development Authority and Puneet Kumar Goel was the Principal Secretary; Goel is now the Chief Secretary. I was not even a member of the Board at that time,” he said.

The Congress party leader said that such an action is causing fear among the investors whose money is at stake in the green industry projects in the coastal belt.

“The allegation levelled against me of converting tenanted land as settlement zone is absolutely wrong, as there are directions that tenanted lands should be treated as orchards,” he pointed out and appealed to the Chief Minister Pramod Sawant to intervene and come clean on the validity of such development plans.

Lobo also questioned the silence of MLAs and on the proposal of the government to increase the floor area ratio (FAR) in Old Goa to 400 and said he had objected to the same during his tenure. He said the heritage church site in Old Goa will lose its UNESCO tag if the government allows an FAR of 400 for providing a satellite town status to the Kadamba Plateau.

“Frequent changes to the development plans are not a good sign. Every term, a minister will come and say that the previous ODP is wrong. The Chief Town Planner during the last term was the same and if the ODPs were wrong, why did he approve them. Some people are poor; if their sanads are revoked, they will approach court and I will support them financially,” Lobo said.

The leader of the Opposition also alleged that there is some ‘motive motive’ behind such actions of the government and added that the TCP Department was trying to fool the people. Lobo already warned that he will approach the court of law if the authorities revoke the sanads issued.

“TCP Minister Vishwajit Rane is personally targeting me, which is not right in politics. I have been a businessman before I could become an MLA. He has already filed a case wherein I have shown that the land is used for farm purposes,” Lobo said and added that this is vindictive politics. He said he has explained the entire issue to the Chief Minister, who, he said, has been quiet on the subject.

“Those in the Opposition are always targeted; it is politics. With regard to the ODPs, he (Rane) can do any changes; he is the TCP Minister,” Lobo said questioning why the TCP Minister is silent on the Taleigao ODP.