Matthew Beverley, an electrical engineer in Mount Pearl, Newfoundland, is known to keep a bag of Haribo gummy candy on his bedside table. There is usually a bag or two in his desk at work. Then there’s the filled plastic bin in his home office, not to mention the scattered loosies.

Some might say this is a problem. He calls it a collection.

It took more than four months during the pandemic for Beverley, 40, to amass his Haribo hoard, which peaked at nearly 120 distinct varieties. Among his most prized are the eccentric Super Gurken gummy pickles and a special 100th-anniversary packet of Haribo’s Goldbears, which he calls “a stone-cold classic.”

A century after they were invented by Haribo in Bonn, Germany, gummy bears remain a sweet, squishy source of joy. But the world of gummies has expanded far beyond that company, into countless corners of modern life.

There are gummy versions of sushi and of interlocking blocks that work like Legos. Gummies have wiggled their way into the wellness industry via gummy supplements, an extension of the gummy vitamins that became popular in the 1990s. These are not to be confused with the so-called “better-for-you” gummies that are marketed as candy, but made with added fiber, less sugar, or pectin instead of animal-based gelatin.

Others are delivery systems for CBD — or its more potent cousin, THC. Which brings us to boozy gummies, containing small shots of cocktails. Further enhancing the party mood are gummy-inspired kitsch like strings of bear-shaped lights and inflatable pool floats. Social media platforms are rife with taste tests, DIY recipes and even a catalog of catchy theme songs.

“Gummies are the most popular kind of candy,” said Marcia Mogelonsky, a director of insight at the marketing analysis firm Mintel Food & Drink. “It’s not surprising that they are turning up everywhere else. They have a certain resonance. It’s one of those nostalgic things.”

It’s also probably a far cry from what candy maker Hans Riegel had in mind in 1922, when he adapted a recipe for fruit-flavored pastilles to create the first gummy bear (or Gummibär, German for “rubber bear”) for his nascent sweets company , Haribo. The densely chewy, gelatin-based gummies were modeled after real-life dancing bearsa form of entertainment at the time, and later rebranded as Goldbears.

Like many German companies, Haribo has come under scrutiny for its operations during World War II. In 2000, Time magazine reported that the candy maker had been “named in the German as having used forced labor,” after it declined to join other German companies in donating money to support surviving enslaved or forced laborers. In 2017, the company said it was investigating assertions that slave labor was being used at plantations in Brazil that supplied the carnauba wax it used to keep gummies from sticking together.

In response, Haribo said last week that it had looked into all the claims and found no evidence that it or its wax suppliers had ever used forced labor. The company said it had helped start an initiative to improve working conditions in production of carnauba wax, and now uses only beeswax.

GUMMY CANDY DIDN’T take off in the United States until the 1980s. Matthew Beverley at home in Mount Pearl, Newfoundland, with his collection of Haribo gummy candy (Source: The New York Times)

The pandemic has been a boon for candy makers, as customers turn to the comfort of an inexpensive sugar rush. Sales of chewy candy in the United States, which includes gummies, hit $4.6 billion in 2021, a nearly 15% increase from the previous year, according to the market research company IRI. The nation also led the world in gummy sales, followed by China and Germany, according to data from Euromonitor.

Gummy fandom is decidedly cross-cultural. And even within the United States, there are an array of regional adaptations.

Ashley Garza recalls her teenage years in the Rio Grande Valley in Texas, when she ate commercial gummy bears in raspas, a shaved-ice dessert, and as dulces enchilados, a Mexican American snack of chamoy- and chile-coated candies. “When I was in high school, people were selling little Ziploc bags of gummy bears with chamoy,” she said.

Garza, 30, was a grocery clerk at the start of the pandemic, but facing mounting bills, she started a candy company called Texas Chile Dulceria with her boyfriend, Adrian Martinez, 28. He hand-mixes the candy, which includes sweet bears and mouth-puckering sour belts. Each batch starts with a generous drizzle of chamoy, followed by a liberal shower of tart chile seasoning. 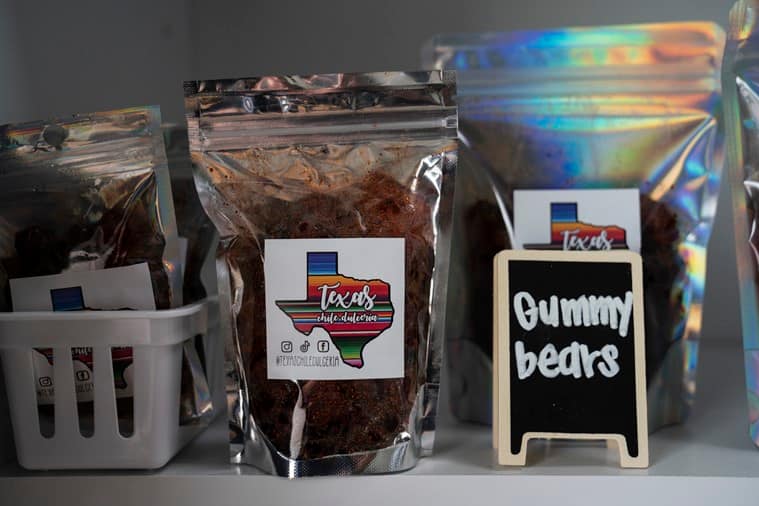 Elizabeth Schmitt, 37, a self-professed gummy fanatic, owns the candy company Ruby Bond, in Atlanta. “Gummy candy is so nostalgic,” she said. “It reminds me of simpler times.”

She layers various shapes onto acrylic trays to make candy “charcuterie.” In one of her most popular arrangements, bears are squished alongside an ombré rainbow of stars, butterflies and other springy creatures.

She has an abundance of choices: oozy jelly-filled shapes, super-sour chews and foamy, marshmallowy creations. She leans toward the softer varieties with vivid colors.

“Not all gummy candies are created equal,” she said.

NOVELTY CANDY SHOPS across the country and online are treasure troves for more extreme takes, from one bear that weighs in at about 5 pounds to a scorchingly spicy counterpart that reaches 9 million units on the Scoville scale.

Jessica Stevenson, 34, owns a candy shop called Hello, Sweets with her husband, Tyler, in Tonawanda, New York. The couple sometimes post videos of their favorite candy to social media, spurring intense debates in the comments section over issues like the merits of a rigorous chew versus a supple one.

“Everybody has very strong opinions about candy,” Stevenson said

TikTok is a rabbit hole of gummy candy ephemera. The platform’s subculture known as Candytok is full of videos in which gummies are poured into a container on an endless loop. One such video that Stevenson posted to her store’s account in 2021 shows a pile of brightly colored bears noisily tumbling into a metal bowl in a gleaming heap. As of Monday, it had more than 660,000 views.

TikTok’s audience skews young, a reminder that gummy bears were originally fashioned to appeal to children. Adults, Stevenson said, tend to be pickier and a little more obsessive about their candy.

In her 2012 book, “Sweet Tooth: The Bittersweet History of Candy,” historian Kate Hopkins elaborates on the deep connection adults have with candy: “Innocence lost rarely can return, and the years of joy that the ignorance of childhood brings is a luxury that we, as adults, cannot afford.”

Sometimes the best we can do, Hopkins writes, is to have a piece of something sweet, and revel in a moment when “nothing else matters except the self and that joy that a sugar fix can bring.”

The physical qualities of gummy candies — their tenderness and the soothing sound as they’re chewed — might serve as a cushion for the hard-edge realities of adult life.

Beverley, the collector in Newfoundland, has finally started to dip into his stash. Unlike sharing his music and movie collections with friends, he said, opening a bag of candy is more likely to elicit a smile. He likes to dole out bags of Goldbears or Sour Cherries to neighbors, co-workers — or anyone, really.

“There’s a joy in collecting it,” he said, “and there’s also a joy in sharing it.”