Artist Vivan Sundaram distinctly remembers the excitement that preceded the inaugural art fair at the Faculty of Fine Arts (FFA) at the Maharaja Sayajirao University (MSU) in Baroda in 1961. He was pursuing his Bachelor’s in painting when the first edition of the fair was held and he recalls how the faculty and students were agog with anticipation . “It brought together students from different departments. We were asked to be as innovative as possible with our works meant for public viewing. It was a lovely learning process,” says Sundaram, 79.

Launched at the behest of artists-pedagogues KG Subramanyan and fellow Santiniketan alumnus Sankho Chaudhuri, the legendary fair was aimed at bringing the larger community in contact with art. Designed on the model of the much-feted art mela of Santiniketan, it comprises performances and workshops, as well as a fund-raiser drive from the sale of works of faculty and students, which included toys, postcards, utilitarian objects and masks alongside print portfolios, sculptures and paintings. To ensure affordability, the pricing remained modest. “The pendulum of exposure swung between the traditions of past art practices and new ideas, bringing folk art and craft forms to be introduced into the repertoire of learning,” says artist Rekha Rodwittiya, 63, who completed her graduation in painting from FFA in 1981 .

The radical thought and intellectual dissent that the department once encouraged, however, now appears to be under threat. Earlier this month, the MSU Syndicate unanimously decided to rusticate Kundan Yadav, a student in the sculpture department, for allegedly creating artworks that led to a protest by right-wing groups on campus earlier this month. The works deemed derogatory were in the form of cut-outs of gods and goddesses with newspaper clippings of violent crimes against women, including rape, pasted over them. Teachers and students argued that the works were not meant for public display, since the student was not from the outgoing batch, and were part of a confidential examination process. But that was not sufficient to prevent the vandalism or rustication. The incident came exactly 15 years after another student, Chandramohan, was suspended from the art school and arrested for depicting Jesus and goddess Durga in an “obscene manner”. He is still to receive his degree certificate.

Established in 1950 on the recommendation of the Hansa Mehta Committee report on educational policy for the Bombay Presidency, the curriculum and ethos of the art faculty in Baroda was defined by its first dean Markand Bhatt and stalwarts NS Bendre and Chaudhuri. Born in independent India and with no colonial baggage, there was an assimilation of existing techniques and traditional Indian art forms, classical styles, art history and aesthetics. Discussions at FFA spilled over from classrooms to studios and homes of artists. The well-stocked library had the best of art books and international journals. Study tours organized to places such as Ajanta-Ellora, Udaipur and Mahabalipuram saw teachers cook for students and travel with them in second-class compartments. Artist Jyoti Bhatt, a student in the first batch, recalls the unconventional teaching methodologies. Like professor Bendre and Chaudhuri, Mani da (Subramanyan) also showed us ways of drawing or composing on paper. However, he would often make drawings on the floor of the painting department. Some of us copied these drawings later,” says Bhatt, 88. Paint me a new world: Photoshoot of a students’ play at FFA in1980 (Source: Jyoti Bhatt Archive, Asia Art Archive)

In the convivial atmosphere, the dialogue between teachers and students was not confined to academics. “The faculty was the epicentre and it was one big family,” says Bhatt. Son of an educationalist in Bhavnagar, he stayed with Markand for a long time as a student, as he was unable to afford hostel accommodation. Gulmammohammed Sheikh arrived in Baroda in 1955 and received the Saurashtra government scholarship of Rs 50 per month. He supplemented the irregular scholarship with income from commissioned portraits, reading poetry on the radio and writing assignments. He was still pursuing his Master’s when Bendre invited him to join as a temporary tutor in art history on a salary of Rs 250 a month in 1960. Coming from Bhavnagar, he recalls how Baroda opened up a new world for him. “What the pioneers visualized was an artist who was literate and educated, a new citizen of modern India, because it coincided with the independence of the country. It was a small institution, the teacher-student ratio was 1:10 or 1:15. The studios were huge, they were like warehouses and were open throughout the day and night. For somebody like me, coming from a small town, it was a great experience to learn from teachers who were working alongside you,” says Sheikh, 85.

Attempting to establish a vocabulary that was telling of the times, during the initial years, the department saw artists respond to notes of Cubism and abstraction, depicting their surroundings and turning to the figurative-narrative style. In 1956, on the advice of Bendre, the Baroda artists came together to form the Baroda Group, which included the likes of GR Santosh, Ratan Parimoo, Subramanyan, Shanti Dave, Bendre, Bhatt and Ramesh Pandya. Exhibiting in cities such as Bombay, Ahmedabad and Srinagar, between the mid-1950s and mid-’60s, their works were critically acclaimed. The showcase depicted their common concerns and their distinct artistic choices. In 1969, Bhupen Khakhar and Sheikh launched the journal Vrishchik, to express the views of artists, share their work and raise pertinent questions, which included a campaign to reform the Lalit Kala Akademi in the early ’70s.

In his paper “Baroda School’s Contribution to Contemporary Art’s Trends” Parimoo, art historians and former dean at FFA, writes: “Baroda school is collectively what all its active participants have made it at any given time. Baroda has had no rebels, rather everyone is a rebel in his own way. It is in this dialectic manner that all conflicting avant-garde view points function side by side, irreconcilable to each other yet open to their developing possibilities.”

With its formidable reputation of fostering talent and harbouring pluralist influences, FFA began to draw the attention of artists from across India. MF Husain gave demonstrations to students in the late ’50s; in 1971, Krishen Khanna organized a display of his works. In the ’60s and ’70s, several members of the Baroda faculty were recipients of prestigious scholarships — if Parimoo studied at The Courtauld Institute of Art in London on a Commonwealth scholarship in 1960, next year Bhatt received an Italian government scholarship to study at the Academy di Belle Arti di Naples and a Fulbright in 1964.

From 1963 to ’66, Sheikh studied at the Royal College of Art, London, on a Commonwealth scholarship. Pursuing his graduation in painting from FFA from 1976 to 1981, artist Veer Munshi remembers the classroom being full of students from across India and the world. “Nasreen (Mohamedi) would ask us to sweep the studios and clean the ground before starting work. We did not understand why then, but now I realise how that brought us closer to nature. She encouraged us to draw found objects and we would do hundreds of sketches in a day, visiting numerous sites, including the railway station,” says Munshi.

The school has continued to produce artists of stage across generations — from doyens such as Jyotsna and Jyoti Bhatt to Nilima and Gulammohammed Sheikh, Jeram Patel, Himmat Shah and Haku Shah to contemporary artists such as LN Tallur, N Pushpamala, Sheela Gowda, Mrinalini Mukherjee , Nikhil Chopra, Prabhakar Pachpute, Abir Karmakar and Shreyas Karle.

Over the years, the art fair, which drew people from across Gujarat and beyond, has become infrequent but the annual MSU final-year students’ exhibition does attract crowds. As the prices of Indian art escalated, it has also become a hunting ground for gallerists to spot potential stars of tomorrow and also to anticipate trends. “The environment at Baroda has always encouraged individualistic thinking. Several artists I am working with are from the faculty and I definitely do some studio visits whenever I travel to the city. This year as well, I have signed up two young artists,” says Bhavna Kakar, director of Latitude 28 gallery in Delhi, who pursued her Masters in Art History from MSU from 2000-2002. 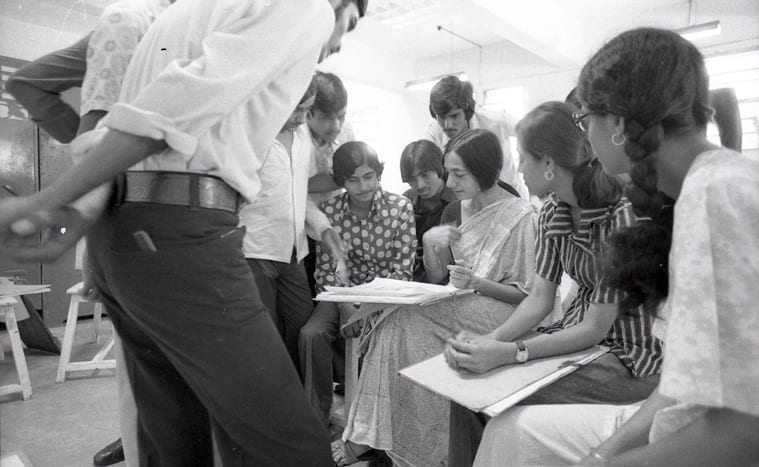 As the close-knit circle of artists, who call Baroda their home grew, an ecosystem also developed around them. The city may still not boast of numerous art galleries but its equidistant location between the art centers of Delhi and Mumbai ensures opportunities. Several studio collectives have also mushroomed to provide young artists a conducive environment to practice.

While the reputation that its founders built persists, much has also changed. With the market becoming a driver for students, the focus has shifted from learning and experimentation to finding possibilities for monetisation. “When I was studying in Baroda, I realised that it was difficult to segregate various kinds of cultural expressions — we had writers, musicians, traditional folk artists coming to talk to us. This is something that made Baroda special. So when we were teaching, we tried to bring in those approaches. We hoped there would be a chain, but we don’t know how it will be in the coming years,” says Vasudevan Akkitham, 64, who was a teacher in the department of painting from 1990 to 2020. Pedagogical concerns require attention as the syllabus remains unaltered even if teaching methods may have changed over time. Bureaucratic norms that require a mandatory doctorate to teach in universities, meanwhile, deters practicing artists from applying for positions. “When it comes to the appointment of teachers, a doctorate cannot be the only criterion for a practical subject. When KG Subramanyan was teaching, he appointed Gyarsilal Varma, a traditional craftsman from Jaipur, to teach us… If teachers come only with a theory-based doctorate degree, they may not be able to do any practical teaching in classrooms,” says Akkitham. “Despite the controversies and unfair propaganda about the institution though,” he says, they still receive around 300 applications each for 14 seats in Masters and 25 seats in undergraduate courses for painting.

The very corridors that once engaging saw arguments, now err on the side of caution. The increasing censorship of art in the country has meant an end to freewheeling conversations and creative experiments. The studios now follow timings, and nude studies, once an important part of academics, has been discontinued. After the Chandramohan incident in 2007, a resolution was passed to check and approve all works in the annual display before its opening. “The artist is an interesting chronicler of the ethos of their times… If we interfere with this process through intimidation and vigilantism we will undoubtedly create skewered narratives that reflect and perpetuate only the dominant majoritarian views as history… a climate of fear and has been injected into society where young creative people are wary of articulating their ideas freely,” says Rodwittiya. “The damage done in 2007 and again this year is, perhaps, irreparable,” says Bhatt.

Probably one of the most telling examples of self-censorship is Sundaram’s reluctance to showcase some of the works he made in 1965-66 at his retrospective in Delhi in 2018. He preemptively “creatively covered up” the works. “It was a painting with a certain iconography that I could exhibit freely in the ’60s, but would be reluctant to show now, given the times,” says Sundaram.