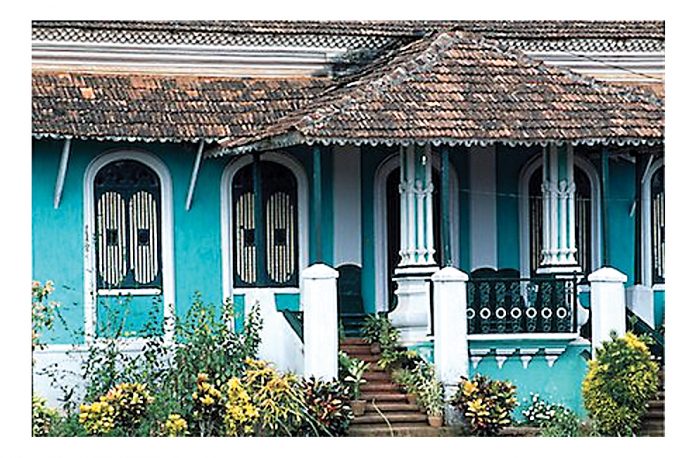 Just on the edge of the Confisca, in the heart of Carmona, stood a large mansion, at least 400 square meters of floor area; I say stood, because today they are two houses with a common wall. Probably at some point of time the mansion was divided among two brothers; I say brothers because both the families who stayed there for the last couple of generations carried the same surname. The houses had a high plinth, conventionally a marker of aristocratic residences. But the families which have resided therein for the last few generations show no traces of aristocracy; They are typical middle class families earning their livelihood from jobs on board the ship or in Mumbai. The members of the families do believe that they are related; but even the last generation did not seem to know how; the division seems to have happened that far back in time. They do not even believe that someday it was one house. That is partly because of the modifications and additions that have happened over time. And there is another reason. Both the houses have small portions that are seldom opened; but it is exactly these portions that strongly suggest the integrity of the house and its grandiose plan. Could there be some strongly guarded mystery behind the silence?

Let me describe the mansion to you; I shall for a while ignoring the fact that they are two separate houses today. A flight of steps leads you up the plinth into a small ‘balcão’ with wooden benches on either side; and then into an ‘entrada’ or entrance. A full height ‘oratório’ lies at the head of the entrada. From either side of the oratório you get a view of the courtyard behind. On the left is a door to enter a small room. After that another door that leads you into the ‘refeitório’ or dining room. The refeitório windows overlook the courtyard, letting in ample light and breeze. On the right are two doors leading into the ‘salão’. As you enter the salão, to the right, which is the front of the house, there is a series of windows. On the left there are two windows opening into the courtyard, followed by a door. The door leads into a small space from which emerges a long corridor running the length of the courtyard. The corridor has a wooden lattice on the sides. It is difficult to guess what the function of this corridor is.

The salão opens into what now is an entrance to the second house. I do not know whether this is an original feature or not; it could be a modification to provide entry to the second house. On the right it opens into a modest sized room. This, along with the entrance could have been a part of the salão in the first house. Behind that there is a room, from which proceeds a corridor similar to the one in the first house. To the right of this room there is a bigger room, which somewhat maintains a symmetry with the dining room in the other house, and overlooks another courtyard.

Interestingly, though the mansion lies at the heart of the Chouki Vaddo, it does not face the Confisca, or what could have been a temple complex; Confisca lies at the back of the house. The house faces a sort of a marshland, now partly developed, on the bank of River Sal. Could the mansion have had any connection with the river, or the trading activity that happened through it? The Deusua crossing and the possible one time port lies less than one kilometer away. At this point of time, everything is highly speculative; this is only an attempt to instigate further exploration. The research could be both through the family history as well as literary and archaeological evidence. Family history would call for old records such as church records. Any information on the conversion episode could be of help, particularly if it yields the pre-conversion surname and occupation of the family that owned the mansion. Oral history could also fill in the gaps. As of now, no such information is forthcoming beyond the last two or three generations. Objects and artefacts in the house or around could also offer clues to the history of the mansion and of the family that owned it.

This mansion could be a case study of how it may be possible to reconstruct the history of a village by beginning with micro-histories. Only there is an acute dearth of information, as the families here are tight lipped about their histories; they consider themselves too ordinary. Many of these villages seem to have been victims of some sort of collapse of an earlier social order which was replaced by one based on bramhan hegemony; as a result of which the ksatriya nobility was swept under the carpet.

Who could this ksatriya nobility be? There is a small group of families in some coastal villages of Salcete – Velsão, Cansaulim, Arossim, Utorda, Majorda, Betalbatim, Gandaulim, Seraulim, etc. who are categorised as caddi but are very different from the rest of the caddi; they are different in physical attributes – their height and the color of their skin for instance; till very recent times they formed an endogamous group. They are probably a community that resulted from the fusion of ksatriya and kirat in the eastern Indo-Gangetic plain; The rest of the komkni caddi constitute the community that resulted from the intermingling of the ksatriya with the natives of Deccan. To distinguish we have called the former kathiyavadi caddi. That is because they took Kathiyavad to the pinnacle of its glory and had to abandon it after it was submerged at the end of the last Ice Age. They are supposed to have landed in Goa in search of alternative ports. Here they found a place that not only looked very much like the homeland they had left behind, but was also promising; in keeping with the nostalgic practice we find common in history, they named the place Kusasthali. They occupy several villages around – Samkhavale (Sancoale), naming it after Shankhodhar (also called Bet Dwarka) that they had left behind; Kelasi (Quelossim); Lotli (Loutulim) probably named after Lothal; etc. Eventually they lost these villages to the incoming brahman and migrated to the neighboring coastal villages. [Fernandes, 1981: Uma Descrição e Relação de ‘De Sasatana Peninsula in Indiae Statu’ Textus Inediti, 94]. And from there to the rest of Salcete, wherever their trade took them. [Santos Pereira, 1898: Chatrias, 42].