Before I got on a Zoom call with Umair Shah, I had promised a friend I would be done in 45 minutes. But two-and-a-half-hours later, I was apologizing for being late. That is because my call with the Kolkata-born Delhi-resident turned out to be a crash course on Delhi’s fascinating history, something he has been digging and uncovering for the past three years.

Shah, 27, is the co-founder of a digital marketing agency, a numismatist, an Instagram influencer, and a self-confessed ‘history nerd’. “My profile is deceptive, I work for fashion brands”, reads his Instagram bio, rather correctly, given Shah’s expansive and exhaustive documentation of history through coins from across eras and monuments forgotten, abandoned, and buried.

Shah says he was all of six years old when his tryst with history started, courtesy of his grandfather who would tuck him in for afternoon naps with historical stories of rulers. “When I was that age, I used to know which ruler ruled where.” Shah’s knowledge in numismatics also took seed at a young age when he was admitted to a coin collectors’ club by his father, the only nine-year-old amid senior citizens. “The reason I was interested in history was because I was interested in coins. By the age of 14-15, I was reading coins and was an unsaid expert of the coins from the British rule of Bengal. Till the time I was in school, I was exhibiting Mughal coins in Kolkata, Delhi, and Jamshedpur.”

And even though his introduction to history began in his hometown Kolkata, it was when he moved to Delhi that things started shaping up. “On weekends, I used to travel to historical places in and around Delhi, like Orchha, Agra, Lucknow. And on holidays, I used to take longer trips, like to Goa, Hyderabad, Kashmir, etc. I also took a trip to Uzbekistan. I only travel for the monuments, history or stories. I don’t travel to see the mountains or a waterfall,” says Shah.

But to feed his love of history, Shah didn’t have to travel far and wide. His explorations in Delhi led to him discovering that which found little to no place in collective memory or the city’s history. That is, until he decided to document it and share on social media.

Shah’s Instagram feed is, for many, a window to Delhi’s glorious past. “I used to think that people know all of this already. It’s only when I started posting these stories on IG that I realised that people have very little idea of ​​Delhi’s history.”

“I often tell people, ‘Delhi mein aap patthar ucchalo toh woh kisi na kisi maqbare mein giregi (if you throw a stone in Delhi, it will land in a cemetery). After all, it is the biggest necropolis in the world. In a children’s park in Sector 39, Gurgaon, there’s a 14th century tombstone of a French army man who led a 4,000 cavalry for a woman ruler to fight the British. Where does this happen? That’s one of my favorite things about Delhi; no matter where I go, I will find something.”

Shah during a heritage walk at Mehrauli’s Zafar Mahal.

Shah, who is now known for his heritage walks in Delhi NCR, did his first walk in Mehrauli Archaeological Park to raise funds for those affected by the floods in Odisha in 2019. “It was a huge hit”, says Shah. “Even people who have been brought up in Delhi and have lived here don’t know that Mehrauli Archaeological park is bigger than the Qutub Minar Complex and it has so many interesting monuments. My walks are to make people fall in love with Delhi.” 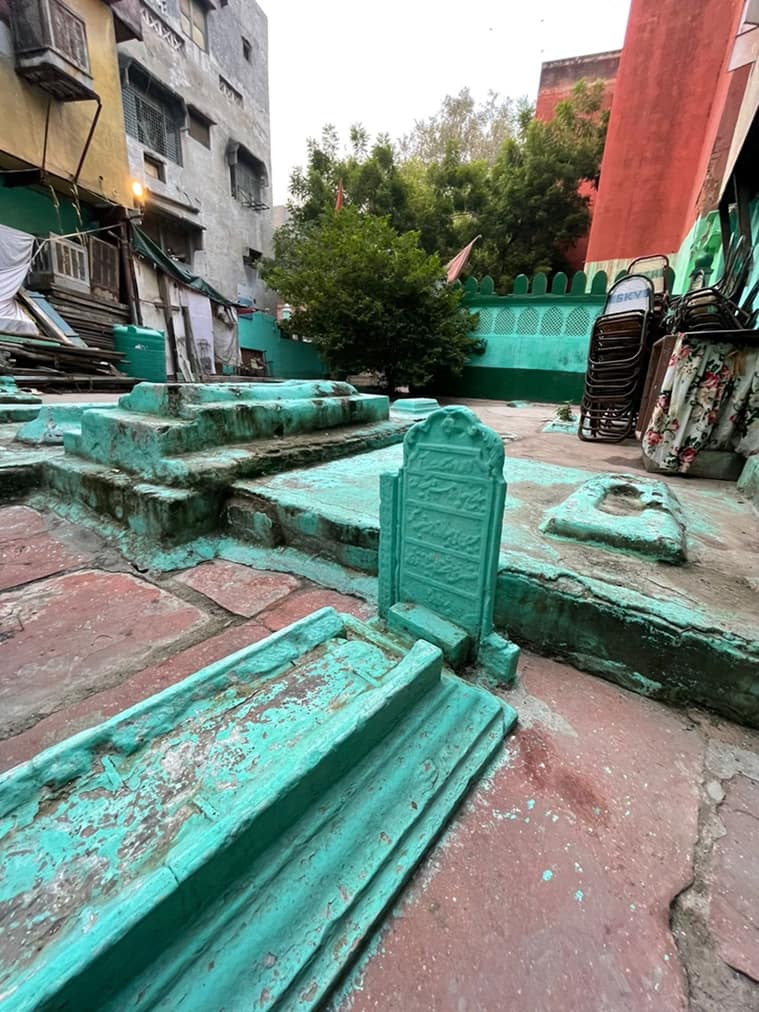 Mohalla Kabristan of old Delhi, next to the dargah of Bayaban Shah. (Photo: Umair Shah)

Even when it comes to Old Delhi, the lanes of which have seen many a heritage walks, Shah’s discovery took him beyond Chandni Chowk and Jama Masjid. “A lot of people do walks that center around Jama Masjid and Chandni Chowk. So, we decided to do one called ‘Shahjahanabad beyond Shahjahanabad’ which would cover what existed even before Shah Jahan the city. The specialty of this was that we went to monuments that Shah Jahan did not make, like Turkman Gate; and the reason why I started there”, adds Shah, ‘was because it is the only gate which points towards something in the city – the Dargah of Turkman Bayabani – whereas every other of the original 15-16 gates (most destroyed) point towards Kashmir (Kashmere Gate) or Lahore (Lahori gate), and such. We unfold these histories which are not really in popular culture. I am not here to tell people which stone what was built in or what style of architecture it follows, you can get a guide for that or read it on Wikipedia; my focus is on the stories.” 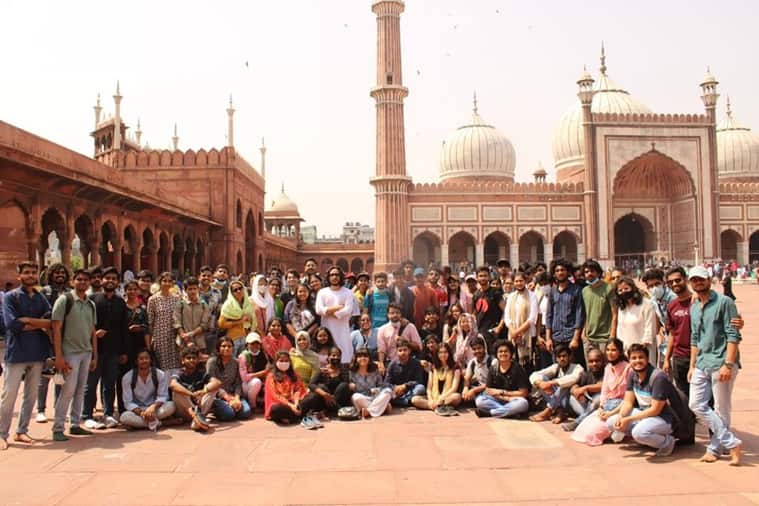 Umair Shah with attendees of his heritage walk.

But Shah’s love for history doesn’t cloud the realities of the present. “Before our walks in Old Delhi, I always tell people that when you are coming here, don’t romanticise it, because for the people who live there, it is ghettoized. They don’t get the basic amenities of water and electricity half the time.”

There is another disclaimer Shah gives to the attendees before his heritage walks – that of being unbiased in a political climate where history is up for convenient changes. “There is a coexistence of a series of generations, cultures, dynasties in Delhi. For example, the Quwwatul Islam Mosque in the Qutub Minar Complex was built on the ruins of 27 Jain temples. We have temples in South India with carvings of Buddhist monks hanging from a trishul. Mahmud of Ghazni was very infamous for destroying the Somnath Temple. In the same era, the Chola Dynasty was destroying temples in Odisha. There were mandirs in Tanjore that were funded by Tipu Sultan and looted by the Marathas. But, if I am telling you something from the 16th century, stop seeing it through a 21st century lens. There should be no religious discussion around a dead monument. It’s meant for historical purposes, and not religious purposes.”

For Shah, most answers for the present can be found in history. In fact, he admits to speaking in historical facts in the face of current affairs. Why? Because it’s relatable, and saves him from the ‘dangers’ of direct commentary. “A lot of the time I proofread extensively and filter myself when I post.” Speaking of the recent communal attack in Delhi’s Jahangirpuri where Muslim houses were razed to the ground with a bulldozer, Shah says that “When I see communal incidents, I don’t write anything directly on social media. What I did in this case was post a picture of a monument and a paragraph from a concentration camp survivors’ book, because it is relatable. I don’t talk about current affairs, I use history to comment on it.”