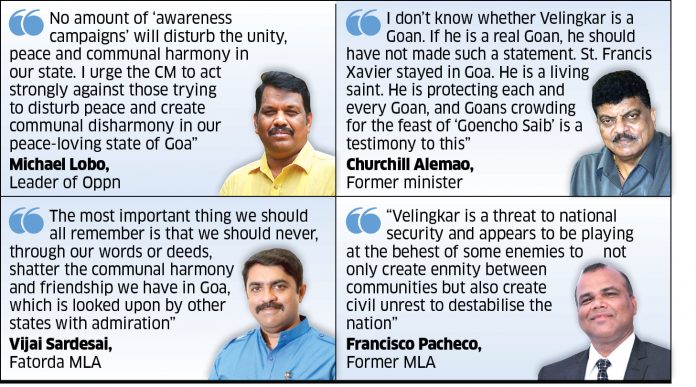 The recent comments made by the convenor of Hindu Raksha Maha Aghadi and former chief of the Rashtriya Swayamsevak Sangh in Goa, Subhash Velingkar, on St. Francis Xavier has drawn flak from various quarters with people and politicians statements taking strong objection to his.

In his complaint, Pacheco has called for strict action to be taken against Velingkar. He has said that Velingkar had on Thursday held a press conference wherein remarks were passed against St. Francis Xavier, who is considered as ‘Goencho Saib’.

“On Thursday, Subhash Velingkar, along with some other individuals disturbed, under the banner of Hindu Raksha Maha Aghadi, held a press conference and uttered a lot of comments aimed at creating enmity communities between them,” says the complaint.

Pacheco has further said in the complaint that Velingkar said that St. Francis Xavier, who is revered by Goans and people across the world as a saint, cannot be ‘Goencho Saib’.

He said that Portuguese officials are the ones who set the name ‘Goencho Saib’ and that the true ‘Goencho Saib’ is not St. Francis Xavier but lord Parshuram. He also spewed venom with the sole aim of creating communal disharmony. He has, therefore, committed offences under Sections 153A, 153B, 295 and 505 of IPC and ought to be booked immediately,” said Pacheco in his complaint.

The former legislator has also said that Velingkar is a “threat to national security and appears to be playing at the behest of some enemies to not only create enmity between communities but also create civil unrest to destabilise the nation.”

Leader of the Opposition Michael Lobo, meanwhile, has urged the Chief Minister, Pramod Sawant, to act strongly against those trying to disturb peace and create communal disharmony in the state.

“Goa is known for its deep-rooted love, peace and harmony amongst its people irrespective of caste, creed or religion.

‘Goencho Saib’ St. Francis Xavier is revered not only by Catholics but people of all faiths from within the state as well as the neighbors and the world over,” Lobo posted on Twitter, indirectly referring to Velingkar.

“No amount of ‘awareness campaigns’ will disturb the unity, peace and communal harmony in our state. I urge the CM to act strongly against those trying to disturb peace and create communal disharmony in our peace-loving state of Goa,” he said.

Stating that he is deeply hurt by the statement made by Velingkar, former minister Churchill Alemao said Velingkar is attempting to disturb the communal harmony of the state by making such senseless statements.

“I don’t know whether Velingkar is a Goan. If he is a real Goan, he should have not made such a statement. st. Francis Xavier stayed in Goa, working for the people of Goa. He is a living saint. He is protecting each and every Goan, and Goans crowding for the feast of ‘Goencho Saib’ is a testimony to this. People across the world come here. All Goan politicians, irrespective of their religion, attend the feast of St. Francis Xavier. Velingkar should immediately get admitted in a mental asylum, as he has lost his mental balance,” fumed Alemao.

Fatorda MLA and president of Goa Forward Party Vijai Sardesai said, “The most important thing we should all remember is that we should never, through our words or deeds, shatter the communal harmony and friendship we have in Goa, which is looked upon by other states with admiration; they envy it.”

He further said that we all must take care to see that we do not intrude upon matters of faith and belief, and keep personal spaces out of public debate. “No one can tell anyone who St. Francis Xavier or Lord Parshuram should be to them. No one should venture out to influence or decide for others or shape their thinking, and should leave such things to each Goenkar, who is mature, progressive and pluralistic to lead their own life and make their own decisions. Let’s all look to the future and see how we can as Goans shape it for the betterment of all,” he said.

Aldona MLA Carlos Ferreira said any attempt to malign the harmony of all religions in Goa is deplorable. “It is with great concern that I have seen the statement of Subhash Velingkar, who claims that St. Francis Xavier cannot be called Goencho Saib, and also claims that he will be releasing ‘Goa Files’ to push forward his points,” he said.

He further said, “St. Xavier is revered all over the world, irrespective of any religion and even by those who don’t profess and believe in any religion. st. Xavier is a saint and protector of Goa, and a well-renowned and respected saint all over the world. For any person to try to ascribe anything not attributable to St. Francis Xavier is highly condemnable. Those who try to attack St. Xavier will suffer in due course of time. I only pray that St. Xavier intercedes and prays for their well-being so that they live true Goanness,” the Congress MLA said.

Former Aldona MLA Glenn Souza Ticlo said, “People from all walks of life, communities and religion attend the Feast of Saint Francis Xavier. Previous governments and also the current government have always supported this festival. People believe that Goa is protected by Saint Francis Xavier from different things…natural disasters like tsunami and cyclone.”

“I don’t know on what grounds he made that statement. He should know that in Goa we all are loving people, living in harmony. I believe such statements won’t damage the social fabric of our beautiful state,” Ticlo added.

A Margao businessman from the Hindu community was of the opinion that Velingkar should refrain from talking about other faiths, as it would only create communal tension and disturb the peace of Goans.

Velingkar was also criticized on the social media for hurting religious sentiments, with many people demanding his apology. A member of the Congress party, Gina Pereira, said on a social media platform, “His statements are not worth responding to. But I do, because he should not think that we people tolerate it. He should immediately take back his statements.”