Volkswagen Virtus, the long-anticipated compact sedan from the German carmaker, has officially gone on sale in India, with prices starting from ₹ 11.21 lakh (ex-showroom, India). The Virtus is offered in two trim options – Dynamic Line and Performance Line. The former is offered in three variants – Comfortline, Highline, and Topline, which are priced between ₹ 11.21 lakh and ₹ 15.71 lakh, whereas the top-end Performance Line option, which only has one variant, the GT Line, is priced at ₹ 17.91 lakh (all prices ex-showroom India). The Virtus is the second model from VW to be built on the MQB-A0-IN platform, which also underpins the Taigun compact SUV.

Now, we have already driven the Volkswagen Virtus and told you all about it in detail. You can find our review on the carandbike website. All variants under the Dynamic Line are powered by the 1.0-litre TSI three-cylinder turbocharged petrol engine that makes 113 bhp and 175 Nm of peak torque and is mated to a 6-speed manual gearbox and an optional 6-speed automatic torque converter. The Performance Line trim, on the other hand, gets the 1.5-litre TSI four-cylinder turbo-petrol engine, which churns out a good 148 bhp and a meaty 250 Nm of peak torque, while mated to a 7-speed DSG automatic transmission as standard. Both get engine start-stop function, while the latter also gets Active Cylinder Deactivation technology.

Also Read: Volkswagen Virtus: What We Know So Far 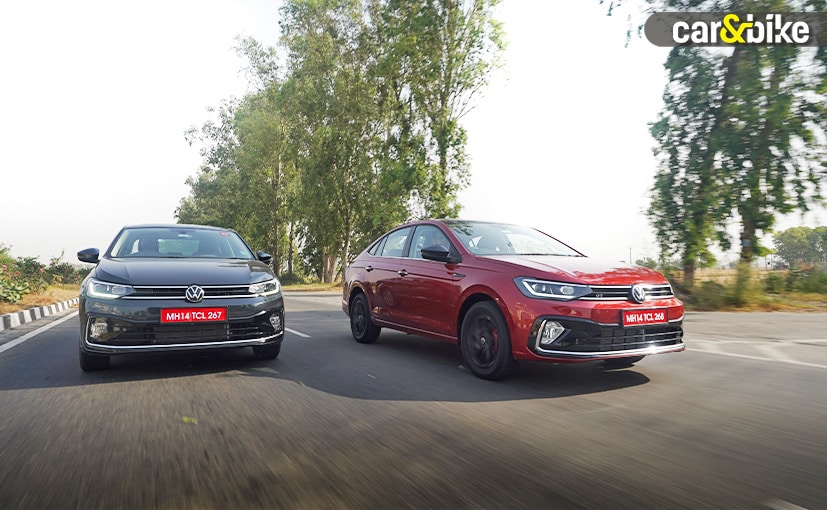 Visually, the new Virtus comes with bold design and styling. The car comes with a slim grille with a chrome strip, flanked by a pair of sleek LED headlamps and LED daytime running lights. The Performance Line trim also comes with a GT badge on the grille. The car also comes with a muscular front bumper, featuring a large airdam and LED foglamps. The Virtus gets a set of 16-inch alloy wheels as standard, and while the Dynamic Line gets a set of dual-tone alloys, the Performance Line trim gets sporty all-black wheels. 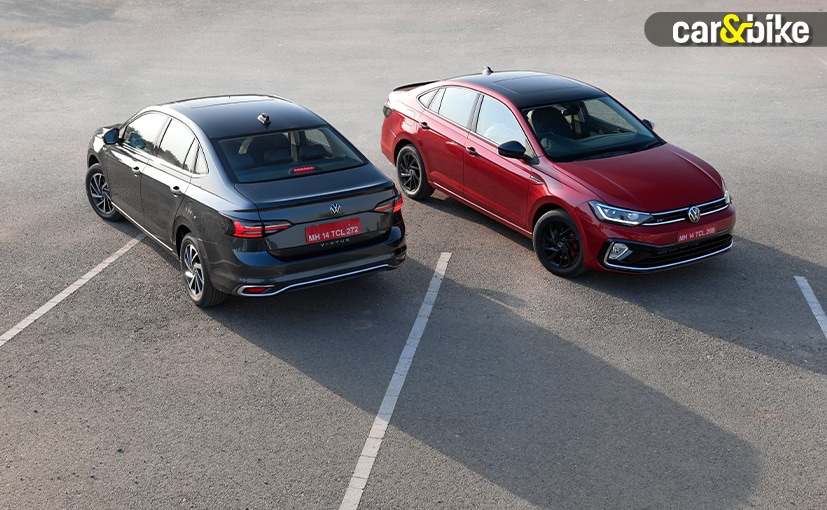 The Performance Line trim also comes with black exterior accents and black roof and black ORVMs. At the rear, the Virtus gets a pair of smoked LED taillamps, and a muscular bumper with underbody cladding, reflectors, and chrome inserts. The Virtus will be offered in six colors – Wild Cherry Red, Candy White, Carbon Steel Grey, Curcuma Yellow, Reflex Silver, and Rising Blue Metallic. With respect to the dimensions, the Virtus is the longest and the widest in the segment.

Also Read: Volkswagen Says Tier 1 And Tier 2 Cities Will Be Demand Centers For The New Virtus 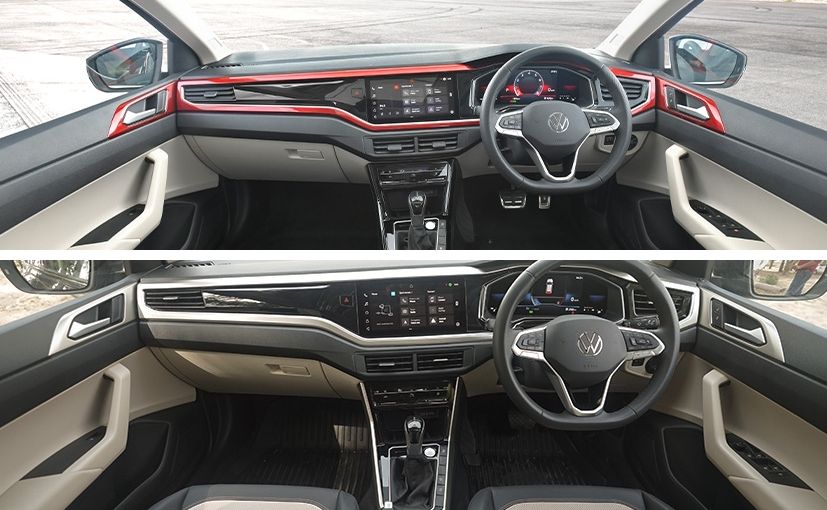 The Virtus gets dual-tone black and beige interior, while the Performance Line trim gets red highlights on the dashboard, which are specific to the Wild Cherry Red paint scheme

Inside, the Volkswagen Virtus comes with a spacious and well-laid-out cabin, finished in dual-tone black and beige interior. The Performance Line Virtus also gets red highlights on the dashboard, which are specific to the Wild Cherry Red paint scheme. The driver-focused dashboard features a large 10.1-inch infotainment system with wireless Apple CarPlay and Android Auto, along with a fully digital virtual instrument cluster, and a flat-bottom steering wheel. 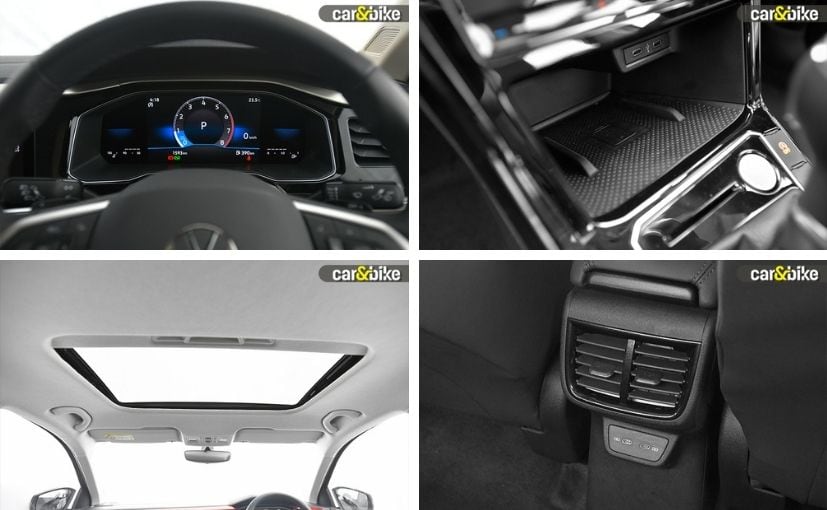 In terms of features, the car comes with a wireless phone charger, ventilated front seats, automatic climate control, rear air-con vents, and an electric sunroof. The Virtus comes with a class-leading 521-litre of boot space, which can be further expanded to 1,050-litre by folding down the second-row seat. The Performance Line also comes with a 60:40 split function. 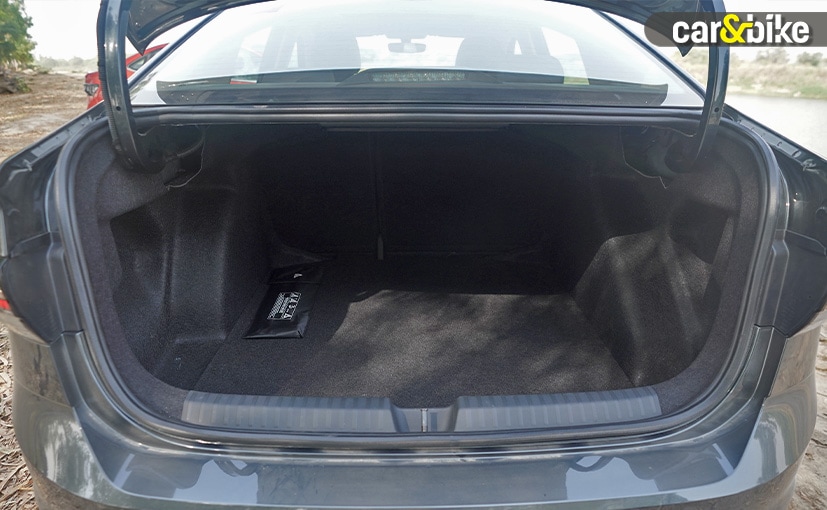 The Virtus comes with a class-leading 521-litre of boot space, which can be further expanded to 1,050-litre by folding down the second-row seat.

With regards to Safety, the Virtus is equipped with more than 40 features, which include standard offerings like – dual airbags, ABS with EBS, parking sensors and more. Other safety features include 3-point seat belts for all passengers, a rear parking camera, electronic stability control (ESC), multi-collision brakes, Tire pressure deflation warning, hill hold control and more.