Japanese philosopher and aesthete Soetsu Yanagi, in his book Beauty of Everyday Things (Penguin Classics, 2019), records how those who love tea bowls in Japan turn them upside down to check the raised rim, which often is “unglazed and, revealing the texture of the clay”… the area is thin and uneven, which is called kairagi (sharkskin)”. This love for “flavourful subtlety”, says Yanagi, comes from an eye for beauty. “Habit”, he says, “robs us of the power to perceive anew, much less the power to be moved”. And here in the Capital, is a roomful of everyday materials, a celebration of daily journeys, at Bikaner House, organized by Gallery Art Positive. Architect-artist Ankon Mitra calls his solo exhibition ‘A Pilgrim’s Progress’. This has been a collateral show to the recently concluded India Art Fair.

“Often when we speak of a pilgrimage, be it the Char Dham yatra for Hindus, Haj for Muslims or a visit to Spain’s Santiago de Compostela by Christians, it’s usually done after retirement, with a huge entourage. After I recovered from Covid last year, for me the simplicity of every day, putting one foot before the other became a celebration of life itself. The act of doing, going through the failures and successes of the day, is about that incremental growth. So I decided to make this show about the little pilgrimages we take, and I wanted to show that through my practice of the art of origami and kirigami, that I have engaged with for the last 15 years,” says Delhi-based Mitra.

In this show, with 15 materials, symbolic of the gallery’s journey and his own, Mitra presents folded art, through installations and objects, as a tribute to the quotidian things of life. Having worked with over 42 materials in the past, including onion skin, he shows his skill in kirigami through paper, leather, metal, glass, fabric, stone and clay. The show marks his journey from his energy drawings – colorful representations of dancers in motion – a study in movement and rhythm, and gentle swirls in crochet to experimental weaves with Odisha’s golden grass, Mitra’s mountain and valley folds on paper yield remarkable perfection in different textures and materials at the show.

If in The Fountain of Foldshe hand-folds aluminum sheets to make a resin cast and then extrudes it to become a working fountain, echoing American sculptor Ruth Asawa’s origami fountains, in ‘The Tectonics of Terrains and Topographies’, he draws from American artist and landscape architect Isamu Noguchi’s Sculptural poise in shaping marble, accordion-like, in a gathering of polished stone.

Mitra’s installations inhabit the space with lightness and fragility, allowing lines and curves, whorls and swirls to offer an unfolding, away from their own materiality. So one has to move really close to the work to see that the hand-folded aluminum, powder-coated brass waves in Her Majesty is metal and not paper, that the black dashes and lines on the yellow refractory bricks are impressions of origami, fired in the kilns of Bulandshahr in Uttar Pradesh. 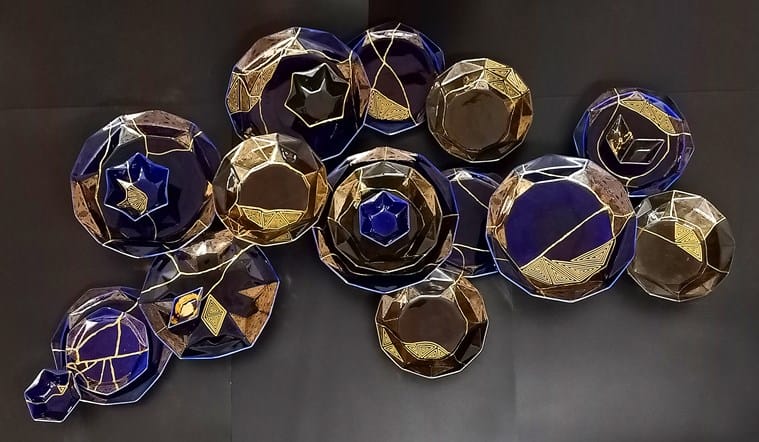 Where the Light Gets In. (Photo: Art Positive Gallery)

“It is not easy to be able to execute the design and bring out perfection. Origami demands perfection and when you juxtapose different materials together, such as fabric and paper, you should be a perfectionist in the way it’s executed,” says curator Uma Nair, as she points to Memories of a War Embrace, where Mitra brings together a Banarasi sari, zardozi strings, polypropylene and cardstock paper. In the red and gold tessellation lie “personal history and memory” for Mitra, of grandmothers and wedding saris – the warm embrace of nostalgic childhood.

If every fold is meant to provoke a change, Mitra did just that when he worked with shadow puppetry artist Anjanappa and his team from Nimmalakunta village in Andhra Pradesh. On parchment goat leather, Mitra had the artisans do their drawings, which manifested into a forest of black lines, with peacocks hidden between inked foliage. Mitra gave the leather sheet its folds, expressed as “an ancient scroll or palimpsest”. “The artist wanted to present a dialogue between two opposing forces, so one peacock is upside down,” says Mitra, as he points to the folds over which they have to hold a conversation. The undulations emote the stretch in relationships. “Unlike paper-mill paper, leather is difficult to work with. While paper has a uniform thickness, with this I need to be careful, knowing where I have to work the cutter blade more when it’s thick and where I need to exert less pressure. But leather as a material lasts really long, paper, which until recently, wasn’t treated,” says Mitra. On the “canvas”, Mitra allows the marks from the stretched fabric to show the lines that artisans leave behind to cut the cloth, the irregular hide edges that are pulled for cleaning the skin. It’s through these “imperfections” that the pilgrim makes his progress. 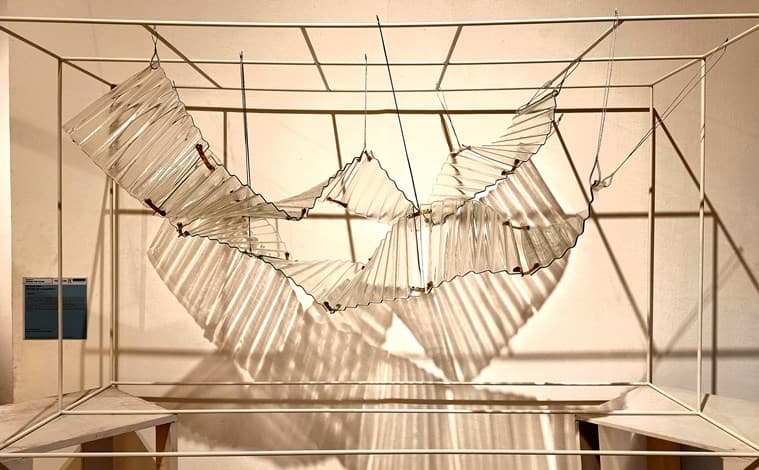 One such pitstop was ceramic. Between 2016 and 2019, Mitra and his team had developed a folded stoneware collection, which had chip-and-dip bowls, dessert plates, cups and more. “It took us about two-three years to develop, but with it also came the breakages. While we could have thrown them away, we didn’t have the heart to do it. The Japanese heal their crockery through kintsugi, where they use precious metal, often gold, to bring together broken pieces, and we thought why not,” says Mitra. Echoing Leonard Cohen’s Anthem As it forgets the imperfections and allows the light to get in, he says, “The gold shines and reflects the light, and paired with the hand-drawn and stenciled gold elements, creates a celebration of the cracks. We become more beautiful, more resilient, wiser and with more gumption from experiences which break us and crack us…those are the places from where we shine the brightest.”

And Mitra is at his brightest in The Arctic Wind, where he brought alive his dream of folding glass. Inspired by the works of American glass craftsman Dale Chihuly, Mitra took baby steps, “by taking sheets of float glass and slumping them onto stainless steel folded sheets.” For this, he collaborated with Gurugram-based ceramic and glass artist Revati Jayakrishnan, and through a series of studied techniques gave glass the flavor of ice. “It has changed me,” he says.