In Pasoori (meaning conflict), Coke Studio’s recent music video in Technicolor that has India and Pakistan bonding over its Punjabi lyrics and pulsating rhythm, one spots a dancer, in a big black bindi and temple-border mustard sari. She comes and goes, swivelling in an old Karachi haveli gracefully, to a mellifluous jugalbandi between Pakistan’s Ali Sethi and Shae Gill, in the latter’s breakthrough debut. Sethi’s lyrics, inspired by the lines Agg laavan teriyaan majbooriyaan nu (set fire to your worries), which he found written on a truck, is layered with interludes on baglama (a long-necked lute used in Ottoman classical music) and electronic drums and octopads. The composition by Sethi and Zulfiqar “Xulfi” Jabbar Khan, that has crossed all borders, has become a global chart-topper and accrued over 11 crore views on YouTube in the four months since its release.

The song, which speaks of estranged lovers and forces that keep them apart, could well be a metaphor for the two countries. Sethi had composed it a couple of years ago, after he wasn’t allowed in India to collaborate on a project in Mumbai. He knew the music, like all good music, would find its own way. Appearing in the video, Pakistan’s classical dancer Sheema Kermani has become a symbol of harmony, tolerance and freedom of expression, standing for the subcontinent’s composite culture that made space for cultural collaborations despite political differences.

But Pasoori is just a short pit stop in Kermani’s accomplished life in art. She’s also a social activist, a theater person and runs Tehrik-e-Niswan, a cultural action group that works for women’s movements. “I thought that this (Pasoori) would bring a little sense of classical dance and its root in Pakistan’s younger generation, which I am hoping they might get attracted towards. In Pakistan, there’s very little encouragement by parents or families for their children to come closer to the classical arts,” says Kermani, 70, who was initially apprehensive to be a part of a song whose language (Punjabi) was alien to her, and also because five decades of her work in human rights took on capitalist corporations.

Born in a progressive “army family” in Rawalpindi and raised in Karachi, dance for Kermani began in the ’60s, when the nascent nation was just about finding its feet. She was eight when she began learning Western classical music. But Kermani’s mother, from India’s Hyderabad, who’d learned Bharatanatyam, was keen that her daughter discover the vitality of dance. At home, Kermani would dance to Noor Jehan’s LPs. When she was 13, Kermani enrolled in a Karachi-based dance school run by Guru Ghanshyam and his wife Nilima, who’d been students of Uday Shankar in Almora.

Prospects of a film had taken Ghanshyam to present-day Pakistan in 1952, the film didn’t get made but he stayed back and taught dance. He set up the center in 1954 when Huseyn Shaheed Suhrawardy, a patron of the arts who would go on to be Pakistan’s prime minister, attended a performance by Ghanshyam in Karachi. Ghanshyam was neighbors with Suhrawardy in Calcutta in the ’40s and that’s how the two knew each other. Kermani came to him and his wife in 1964 and learned for two decades, until the early ’80s. General Zia’s military regime deemed dance as un-Islamic and banned it in 1977. The first TV program to be banned on PTV was Payal (1978), Kathak dancer Nahid Siddiqui’s show explaining the artform. Later, Siddiqui lived in exile in England, where she taught dance until she returned to Lahore many years later and set up an academy.

Before the Ghanshyams left Karachi for Calcutta, Kermani visited India in 1983 and enrolled herself in the dance program at Delhi’s Shriram Bharatiya Kala Kendra. The Indian capital city felt familiar yet distinctive, Kermani began to study Bharatanatyam under Leela Samson, Kathak with Ram Mohan Maharaj, and Odissi with Aloka Panicker and Mayadhar Raut. “Dance felt like freedom for my body, physically and emotionally,” says Kermani. 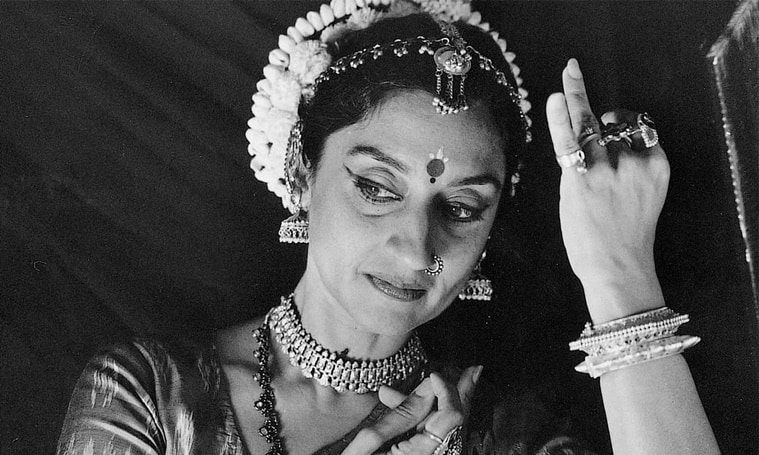 Kermani kept returning in the ’80s; once with an Indian Council for Cultural Relations scholarship. “I came to imbibe the arts. I had a wonderful time in Delhi. I was sharing a room with a Bangladeshi girl who was there for classical vocals. So, sometimes, I’d go and attend Pt Amarnath’s classes with her. I knew I was not there forever and thus wanted to absorb everything I could. I’d run to every class that I could and attend as many performances as possible in the evening. It turned out to be the most beautiful time of my life,” she says.

In India, wherever she went, she was met with mild curiosity. Since dance was banned in Pakistan, Kermani’s gurus in Delhi would joke if she’d go back and dance in her bathroom. “I never encountered any response from anyone. They taught me with a lot of affection and I always felt this dynamic cultural aliveness,” says Kermani, adding, she now encounters bits of aggression while speaking to people in India.
Her sociopolitical awakening happened in the late ’60s, when she was studying fine arts at London’s Croydon College, and found herself in the midst of a social movement (Summer of Love), resurgence of the political left movement, anti-Vietnam-war movement and feminist Kate Millett’s seminal book Sexual Politics (1970). On her return, in 1979, Kermani founded Tehrik-e-Niswan to organize seminars on domestic violence and Aurat Marches.

But dancing wasn’t easy. As the only dancer living in Pakistan through the Zia years, and who frequented India, she was disliked by the government and the men of her country. “When a woman stands up on stage with confidence, is ready to perform, and demands respect from the viewer, the message she is giving is this woman is in control of herself, her life and now they cannot control her; that transference of power is what men find challenging,” she Kermani, who loved a good challenge. “I wanted to perform and do it in a clever way so that I wasn’t caught or arrested,” she chuckles.

Students were always few and far between. Kermani, a Pakistani Muslim woman, would not the banned sari and a bindi, in political defiance and for aesthetics. For years, she would go from one government office to another for no-objection certificates. If she uttered “dance performance”, she wouldn’t get it. “Cultural programme” worked. She didn’t announce her institution as a dance academy but said she was giving movement classes, and eventually used it for protest theatre.

“I’d sometimes perform without the ghungroos (considered haram) because that’s what they had a great objection to,” says Kermani, who improvised to take dance to people. “If I’d been a purist, I wouldn’t have been able to do it all. Since I’ve taken it as a challenge, not as resistance, I’ve been able to fight it,” she says.

Her Sufi dhamal performance at Lal Shahbaz Qalandar shrine in Sehwan Sharif, only days after the 2017 suicide bombing there killed 88 people, found much attention. “I wanted that attack to not change anything, so I went and danced there,” she says. The subcontinent’s “fundamentalism” has been detrimental to its cultural environment. “Religious minorities didn’t feel as discriminated against as they do today. And there’s no other dialogue more impactful than cultural dialogue,” says Kermani, who believes the only way forward is to integrate culture with politics. “Politics of both our countries needs to mean what it should — justice, liberty, equality. And these things can only come about when there’s a conscious cultural change in people’s minds,” she says.