Every time I go to the Apple India website, I am tempted by one device: the iPad mini. In fact, there’ve been several instances where I’ve added it to the cart and almost bought it. But there are two main factors that have stopped me from hitting buy. One is the starting price of Rs 46,000, which is a fair bit to pay for a tablet, given my major use will be entertainment. Two, I’m not entirely convinced that a tablet can replace my productivity needs and I still need the comfort of my laptop. Still when I think of a tablet to purchase, inevitably it is the iPad brand that comes to mind. But the Xiaomi Pad 5, which starts at Rs 26,999 (Rs 24,999 is the introductory price for now) wants to change this mindset.

Xiaomi Pad 5 clearly wants to take on the iPad (9th generation), the most affordable of the lot at Rs 30,990. It is trying to pitch itself as an affordable Android tablet that can match up productivity, performance and entertainment needs. In fact, this is one product which has certainly sparked a lot of discussions. I’ve had peers ask whether they should just buy it straight up already. But is this the right tablet for you, though? Here’s my review.

The design is no doubt impressive. It is sleek and weighs 511 grams, which does make it slightly heavier than the iPad 9th gen. This tablet has a polycarbonate back, though at first glance it certainly doesn’t look like one. This does not mean that the build quality is a compromise in any way.

The Xiaomi Pad 5 comes with quad speakers at the top and bottom, there’s a Type-C USB port, and a magnetic pin on one side to connect it with the keyboard. The Xiaomi Smart Pen can be attached to the side where the volume buttons are placed. There’s no headphone jack. Xiaomi is also limiting the Pad 5 to just WiFi-only variants in India. There’s no cellular option, and presumably, those would have cost extra as well. Frankly, not everyone needs cellular connectivity. I had taken the tablet out with me one day, and using my mobile as a hotspot worked just fine given the basic tasks.

The tablet has a 10.95-inch LCD display and this is a 2.5K resolution with a 16:10 format. It also comes with support for Dolby Vision and HDR 10. The maximum refresh rate is 120 Hz, though you have the option of sticking with the base 60 Hz as well. During the course of the review, I kept the refresh rate at the maximum. 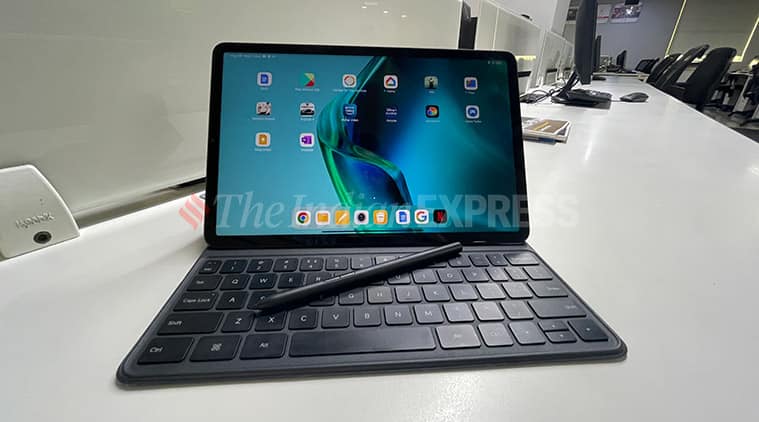 The company has introduced as Smart Pen and Smart Keyboard as well, though the final prices for these are not confirmed. (Image credit: Shruti Dhapola/Indian Express)

I watched four episodes of Mai, Gangubai Kathiawadi and three episodes of Succession on this tablet. This is a very capable entertainment device. Both Gangubai and Succession were a treat to watch on this, with Mai I felt that the screen struggled with some of the darker scenes. In fact, even cranking brightness to 100 per cent wasn’t sufficient. But I want to stress that such dark scenes are tricky for even the best smartphone screens, including devices that cost a lot more than the Xiaomi Pad 5.

The audio quality is also good from a daily entertainment perspective, though it doesn’t quite pack the punch I had expected. I had to keep the volume at higher levels when watching Succession, Gangubai. The Xiaomi Pad 5 comes with the Snapdragon 860 processor, 6GB RAM and 128GB or 256GB storage version. In terms of daily performance, there were really no complaints as such. Yes, this tablet is powerful enough to run your daily quota of games. I only played Alto’s Odyssey and Asphalt 9 on this given. I don’t see myself gaming on a tablet. I prefer more compact devices.

I used this tablet to make a Google Meet call, typed articles on it, did some general browsing and mostly relied on this for entertainment. From that perspective, it is an excellent device.

But a tablet is more than just about its capability of running games. It also needs to be useful for productivity and the Xiaomi Pad 5 does deliver on some crucial fronts. For instance, when used with the Xiaomi Smart Keyboard, I found this to be a good enough device for typing articles. What further boosts productivity for someone like me when I’m typing is the ability to use a regular Bluetooth mouse with this tablet. Split screen on the Xiaomi Pad 5 with Disney+Hotstar on one side and a Google doc on the other. (Image credit: Shruti Dhapola/Indian Express)

As I mentioned in my first look, I’m not a fan of small keyboards, so this was quite the leap for me. In fact, this entire review has been typed on the Xiaomi Pad 5. I’m not saying I’m entirely comfortable with the keyboard. There’s still a lot of muscle memory fighting that takes place. But this tablet will be sufficient for short work trips, where I don’t feel like carrying my laptop.

The tablet runs MIUI for Pad which is a dedicated OS for tablets from the company. Keep in mind not all apps on Android are optimized for this. For instance, Disney+Hotstar I noticed is geared towards mobiles, and even when browsing in landscape on the app, it remains in portrait format as it would on a smartphone screen. Of course, when watching a video it switches to landscape automatically, but it is odd when you are browsing. Not all apps are optimized for browsing on a tab as can be seen in the case of Disney+Hotstar. The screen auto-lock is off for those wondering. (Image credit: Shruti Dhapola/Indian Express)

The user interface also includes a dedicated dock at the bottom, similar to what Apple’s iPad and macOS offer. You can access your most recently used apps from here. It also helps that the rear camera has a dedicated document mode. One can easily take pictures of these, mark and add annotations with the Xiaomi Smart Pen, etc. The front camera is also good enough for video calls.

It also supports floating windows, and split-windows view, all useful geared towards boosting multitasking. But not all apps support split windows view, which includes Gmail and Netflix. Google Docs, YouTube, and Prime Video are some of the apps which do support split view. In fact, I had the review open on one side and Prime video on the other. Not ideal for productivity, but hey whatever works for you. I also had Chrome open as a floating window while writing, but then I could not figure out how to close it, which got frustrating. So yes, understanding the gestures and features does take some time on this. But there are some software glitches.

For one, the tablet did not let me add another Gmail account to the device. I’m not sure why this is happening, but it clearly needs a software fix. Another issue I noticed was when using the pen to make a shopping list. At some point, I ran out of screen space when using the Notes app, but the page space didn’t automatically expand to add more as it should have done. I thought this was also strange. I realised that when writing with the pen, there’s no side scroll on the Notes app. This does appear when I use my husband’s iPad and Apple Pencil and you can keep extending the page as you continue to jot down stuff. I struggled quite a bit with this and the Notes taking feature needs some improvement. Is there some secret setting I’m missing? Perhaps.

The Pen itself can be used for a number of actions, including screenshots and it has two buttons as well. But the transition to it is not as smooth and figuring out how all of this works can be a bit challenging.

The tablet comes with an 8720 mAh battery, which should easily last two days with heavy-duty usage. Xiaomi is bundling a 22.5-watt charger in the box and it gets to 100 per cent in around three hours or so. The Smart Pen charges by attaching to the side of the tablet. Xiaomi Pad 5: Should you consider this?

If you are looking for an Android tablet that offers a good display, and performance, while fulfilling daily entertainment and basic productivity needs, the Xiaomi Pad 5 does deliver well. Xiaomi has not yet confirmed prices for the Smart Pen or the Smart Keyboard. It might be an ideal tablet to get for online schooling and entertainment purposes as well provided you are willing to spend above Rs 20,000, but don’t want to cross the Rs 30,000 limit. I’m seriously considering getting this for my niece since she has a rather terrible one at the moment.

The Xiaomi Pad 5’s introductory price also makes it enticing. You are getting 128GB storage at Rs 24,999. Remember more storage is always great on a tablet. But it does have software flaws that need fixing, especially if someone plans to get the Smart Pen and Keyboard along with it. The Notes app, the second Gmail account issue, in particular, need an urgent software update.