This is a story about infections, sex and underwear. More specifically, it is about sexually-transmitted infections, oral sex and ultrathin, super-stretchy, vanilla-flavored panties.

The Food and Drug Administration has authorized the panties to be considered protection against infections that can be transmitted from the vagina or anus during oral sex. It is a first for underwear.

The undies are part of an understudied but important area of sexual health Where the few options for protection are considered cumbersome and hardly used.

“Oral sex is not totally risk-free,” said Dr. Jeanne Marrazzo, director of the division of infectious diseases at the University of Alabama at Birmingham. She said the need for protective methods was of growing importance because more “teenagers are initiating their first sexual activity with oral sex.” For people of all ages, she added, a protective barrier that is enjoyable to use could “reduce anxiety and increase pleasure around that particular behavior.”

Infections like herpes, gonorrhea and syphilis can be transmitted through oral sex, according to the Centers for Disease Control and Prevention. The risk of transmitting HIV from a vagina through oral sex is considered very low, the CDC said. But HPV — human papillomavirus — is more easily transmitted that way, mouth and throat infections from some types of HPV may develop into oral or neck cancerthe agency said.

“The FDA’s authorization of this product gives people another option to protect against STIs during oral sex,” said Courtney Lias, director of the FDA office that led the review of the underwear.

The only product previously authorized for protection during oral sex was a dental dam — a thin, rectangular sheet of latex (or sometimes polyurethane) that typically must be held in place with one’s hands to form a barrier between the mouth and genitals.

As the name suggests, dental dams, invented in 1864 and originally made of rubber, were designed to isolate teeth during dental procedures. But the AIDS crisis ignited concern about sexual transmission of infections, and in the early 1990s an Australian company, Glyde Health, created a dental dam that was primarily inspired by concerns of women who have sex with women, an official with the company has said.

Although several brands of dental dams have received FDA clearance for protection against sexual disease transmission, the devices have not exactly been a hit.

“They’re extremely unpopular,” Marrazzo said. “I mean, honestly, could there be anything less sexy than a dental dam?”

There is little data on how widely they are used, but a 2010 study of 330 Australian women who had sex with women found that only 9.7% reported ever using a dental dam, and just 2.1% said they used dams often. A 2021 CDC report said use of dental dams and other safe-sex methods was “infrequent” among women who have sex with women.

Dams are sold online and in sex shops but are not widely available at pharmacy chains and are usually more expensive than condoms. The CDC’s webpage on dental dams shows how to cut a condom to make a dental dam, but this does not appear to be popular either.

“Many people report that dental dams are awkward and take all the pleasure out of oral sex for both the giver and receiver,” said Chris Barcelos, an assistant professor of women’s, gender and sexuality studies at the University of Massachusetts Boston. “They are hated even more than condoms.”

The idea for damlike undies struck Melanie Cristol after an experience in 2014 during her honeymoon in Mexico with her then-wife. Cristol, then a corporate lawyer, discovered she had an infection that could be sexually transmitted.

Realizing how limited the protection options were, “I was just so discouraged,” said Cristol, who recalled that when she was a sex educator in college and taught about dental dams, “people looked at me like I was crazy.”

“I wanted to feel sexy and confident and use something that was made with my body and actual sex in mind,” she said.

Cristol formed a company that in 2018 began selling single-use underwear for “people with vulvas.” She said she named the product Lorals partly because the L sound “evokes words like love and lust, and it feels a little bit like a movement that you use” during oral sex.

The panties — available as bikinis or shorties — are made of latex that is about as thin as condom material and forms a seal on the inside of the thigh to keep fluids in, Cristol said. The company markets their use for a range of reasons, including during one’s period, when a partner has a scratchy beard or when a person has experienced previous trauma and does not want to be too exposed.

Cristol said that, responding to customer feedback, the company reduced the intensity of the vanilla taste, added more cornstarch to prevent stickiness and will introduce a sheer version in addition to the current opaque black version. 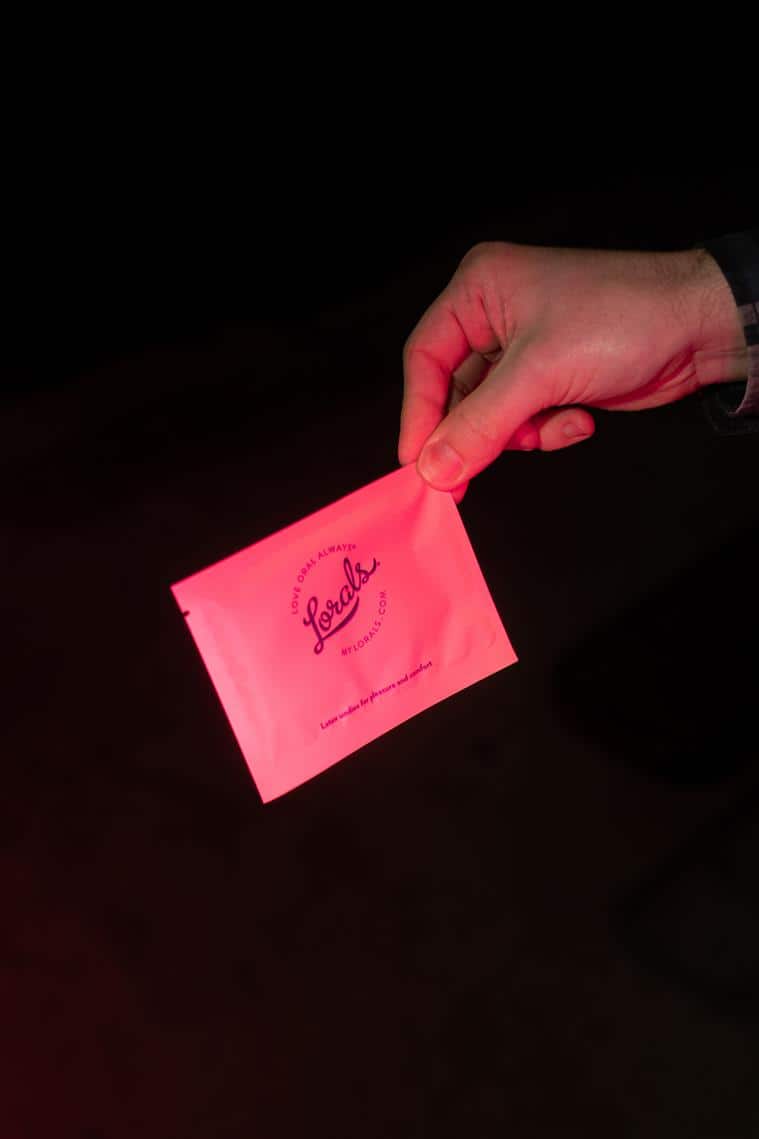 On Thursday, the company will begin selling undies explicitly for infection protection, which Cristol said would resemble its other products but would meet the more rigorous uniformity standards required for the FDA authorization.

“What’s interesting about this is that they have basically eroticized protection, which is something that condom companies have struggled with for years,” Marrazzo said.

The FDA said it did not require human clinical trials but, as it does with condoms, gave Lorals authorization after the company submitted extensive documentation about thickness, elasticity, strength and other measures. Within the past year, the FDA has also given clearance to two new dental dam companies, possibly suggesting increased consumer interest.

Sexual health experts said they welcomed the additional option, but some were unsure it would be popular and said more medical information was needed.

Mayer said he would like to see “real-world data” from people’s actual experience to substantiate the underwear’s ability to block transmission.

“The FDA clearances and increased product development seem to signal a greater potential market, but I don’t see a ton of demand,” Barcelos said, but added that such products can be “an important way to show a sexual partner that you care about them and take sexual health seriously.”

Two Lorals customers, whose contact information was provided by the company and who asked to be identified by their first names because of the sensitive subject matter, described various motivations for using the underwear.

Wisty, 28, who identifies as pansexual, has had sex with men and women and uses they/them pronouns, said the panties were “a solution I didn’t know I needed.”

A dancer and Reiki energy healer in the Boston area, Wisty said they had herpes simplex, a common infection that in rare cases can cause serious inflammatory conditions. “I wanted to find something that makes it easier for me to enforce the boundaries that I wanted to,” Wisty said. “To be able to still play and explore while having that comfort and safety of knowing that I’m protected from my fluids going everywhere.”

Shelly, 29, a nurse in Washington state, said she saw the panties on TikTok at a time when she and her fiancé, Ashton, were struggling to reengage in oral sex after cancer requiring reconstructive surgery had caused changes in his tongue’s mobility and ability to taste. In the aftermath of his cancer treatment, oral sex — once their favorite sexual activity — made Ashton feel like he was choking, and they had not done it in nearly two years.

“It was such a huge thing that he’d enjoyed over penetrative sex or anything,” Shelly said. Without it, she experienced “a lot of insecurity, feeling that maybe he doesn’t have interest for me in that way anymore.”

After ordering the panties, “we spent a couple hours just looking at it,” Shelly said. “We’re like, ‘What are we dealing with here? It smells like vanilla. It stretches to kingdom come. Like, what is this?’”

Wearing them during oral sex worked very well, said Shelly, who added that she could barely feel the panties and that Ashton said the texture resembled skin and the taste was “like you’re eating a cookie.”

She said she appreciated the new clearance for infection protection because Ashton is vulnerable to cancers that can be triggered by sexually transmitted infections.

The sexual experience was especially important, she said. “I never thought I would feel that again,” Shelly said. “And he was very like gung-ho about it when he realized that, ‘Oh, I can do all the things.’”