To address the issue of waste management and eliminate landfills and incinerators in the Virudhunagar district of Tamil Nadu, a group of local residents have been educating people about waste segregation, up-cycling, and recycling their garbage through a ‘Garbage Bank’.

The ‘Garbage Bank’, functioning since October 2, 2019, also segregates the waste from people’s houses so that it doesn’t end up in landfills and incinerators. This initiative aims to involve the people of the district to manage waste and create awareness of recycling garbage.

Speaking to indianexpress.com, R Rajavalli, Convenor of the Garbage Bank, said, “We started this work six years back with the realisation that mixed garbage is a huge environmental issue that should be solved at the grassroots level. While most of the residents were blaming the municipality and corporation, no one wanted to take up the effort to address the issue. Which is when I thought we must create awareness on segregation of waste.”

The ‘Garbage Bank’, which was started on October 2, 2019, focuses on educating people about waste segregation, upcycling and recycling of their garbage. (Garbage Bank)

For over four years, Rajavalli went across schools and colleges to educate the people of Virudhunagar. “Our objective is to educate, empower, and enrich. In order to achieve this, we visit schools, colleges, hospitals, residential communities, and other institutions. We take classes, we teach people how to separate waste and collect garbage in order to recycle as well as up-cycle,” said Rajavalli.

Later, it struck Rajavalli that education was not enough, and it was important to make residents execute the process. Which is when she decided to start the ‘Garbage Bank’. “We started off as an educational forum by holding classes and workshops. It was then we were instructed by some professionals that we should get to the next level and don’t just educate people. That’s when we began the garbage bank,” she added.

Since 2019, the garbage bank has associated itself with over 600 families in Virudhunagar which segregate their waste and give it to the bank, which in turn segregates the waste into more categories to recycle, reuse and up-cycle the garbage. To date, 45,000 kg of garbage has been collected, and recycled at the bank, stopping it from ending up in landfills in Virudhunagar.

“After educating these families, we receive their segregated garbage in four types; paper, plastic, metal, and e-waste items. Once this reaches the bank, we have employees who then re-segregate the garbage into 42 different items. we try to reuse most of the items given to us. We make cloth bags out of old cloth items,” said Rajavalli.

“We are not a formal organization because all members here have full-time jobs. There are entrepreneurs, school principals, IT professionals and teachers. We do this in our free time,” added Rajavalli.

The Garbage Bank project is also executed in association with a group ‘Nammadu Oor, Nammadu Kadamai’, which holds two Guinness world records–for the largest lesson on recycling with 17,303 school and college students and the highest number of plastic bags recycled within eight hours (2,37,900 bags). 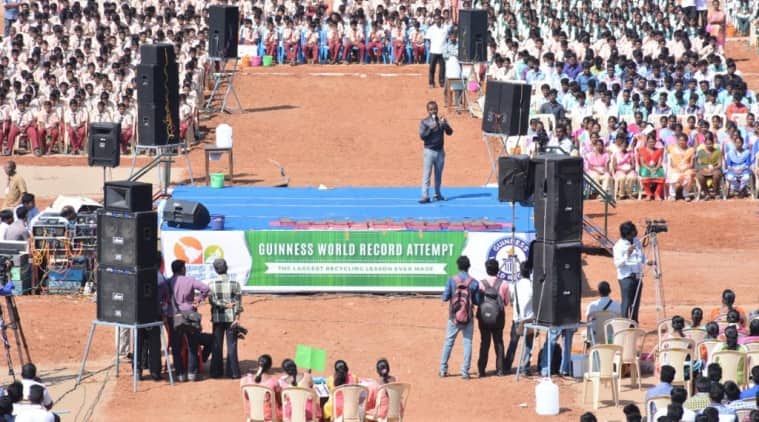 The group also holds two Guinness world records– for the largest lesson on recycling with 17,303 school and college students and the highest number of plastic bags recycled within eight hours (2,37,900 bags).

Revathi Rajasekharan, the formerhip development cell coordinator of VV Vanniaperumal College for Women, Virudhunagar, reached out to the Garbage Bank a few years ago, when her students had taken up a project to segregate waste. “My department went on to install three different bins in each class for biowaste, plastic and paper. Eventually, when the whole college followed the method, there was a close to 300 kg of garbage, which we could not dispose of. That’s when we reached out to Garbage Bank to fix this. Thus, plastic waste was recycled.” After this, Rajasekharan also joined the group and continues to educate and create awareness in the district.

The garbage bank also conducts an auction where the up-cycled products are sold at a price. “When you see old items in the garbage on the streets, no one wants to use them. But, if there’s a bank that recycles these and displays them nicely, people tend to buy them because it’s useful to them. In our auctions, we’ve sold old beds, e-waste, and other electronic items,” Rajavalli said.

A distinct feature of the garbage bank is that the families who give their segregated waste to the bank get back money in return. Towards the end of the month, the bank calculates the amounts received from scrap items, and gives the money to these families. Depending on the scrap material, families are given between Rs 2 to Rs 20 on average. To date, Rajavalli says, Rs 92,000 has been given to the 600 families.

The garbage collection is done geographically where a group of people are assigned on different days at different locations. “In other cases, people call us directly when their bins are full which we go and collect as soon as possible. The biowaste is used to make compost and the rest is recycled,” she said. The garbage bank has a godown in Virudhunagar and also employs six to seven people.

“Even if items such as torn bags, slippers/shoe/belt, thermocol, and other hazardous waste. We tell our beneficiaries to give this as well. With thermacol and acetone, we make a paste that’s used as a mold to make small toys which are then sold again,” she said.

Chandra, an English teacher at a school in Virudhunagar, said, “In our school, we give our garbage to the Garbage Bank, and they buy it. For 300 kg, they paid us Rs 1,749. This is an amazing process. This allows waste to be recycled without harming the environment.” The garbage collection is done geographically where a group of persons are assigned on different days at different locations.

When asked if the Garbage Bank is associated with the municipality and corporation at Virudhunagar, Rajavalli said, “While we have extended our arms to the municipality that we are ready to help them, there are certain constraints. They are doing good work but we are trying to help them as people don’t segregate waste when it is handed over to the municipality workers. If they are aware of its significance, this mess will no longer happen.”

The Garbage Bank and ‘Nammadu Oor Nammadu Kadamai’ team wish to expand their project to other districts in Virudhunagar. “We have a five-step prototype that we are ready to give to anyone who is interested in our sustainable model. Two districts in Tamil Nadu have already reached out to us on this and we hope to expand.”

“We are glad that people are now slowly realizing the importance of waste segregation and wish to implement it in their houses,” said Rajavalli and Rajasekharan.