The Realme GT Neo 3 is the latest in a line of ‘flagship killers’ to enter the Indian market. It is being introduced at the same time as the similarly-specced OnePlus 10R, but this phone comes in at a slightly lower price to make itself an appealing option.

This is powered by the MediaTek Dimensity 8100-powered and is supposed to be a performance-oriented phone with eye-catching looks and one of the fastest charging systems out there (150W just like the OnePlus 10R). But does this Realme phone also turn into a “jack of all trades, master of none” like many flagship killers before it? Read our full review to find out.

I handed the Realme GT Neo 3 to a friend in the middle of an unrelated conversation. He paused mid-sentence and after checking the phone out for a good minute with the customary “dikhne mein mast hai yaar”. That’s exactly how good the GT Neo 3 looks, irrespective of whether it is placed on a desk, in your hand or anywhere else.

The blue variant of the phone looks more violet than blue, but is eye-candy either way. (Image Source: The Indian Express/ Chetan Nayak)

While looks can be subjective, I think most people who are not going for something more minimal will like the aesthetic of the Realme GT Neo 3, stripes included. Apart from the blue, the brand also has a black and white variant and a ‘Stealthy black’ for those who don’t want something too loud. Unfortunately, the ‘Dare to leap’ logo is still here, but now it only takes up a small area on the back between the stripes so that’s good.

The Realme GT Neo 3 comes with a generously bright 6.7-inch AMOLED panel. This display is well equipped to be used under direct sunlight and also gets pretty dim in the night. The 120Hz brings smooth animations to the user interface (UI) and you do get an auto-select mode to let the phone switch between 60Hz and 120Hz as and when needed. The small bezels and centre-aligned punch-hole cutout also give this screen plenty of real-estate to enjoy games, movies and other content on. HDR10+ certification also gives you great dynamic range, handy for content in visually darker tones. This is a compromise-free display, even packing a 10-bit panel.

The last ‘GT’ phone I used was the Poco F3 GT which was great at performance and gaming, but terrible with the camera. Thankfully, this is not the case here. While the GT Neo 3 doesn’t have a bomber killer camera setup, the 50MP + 8MP + 2MP setup here is quite capable. 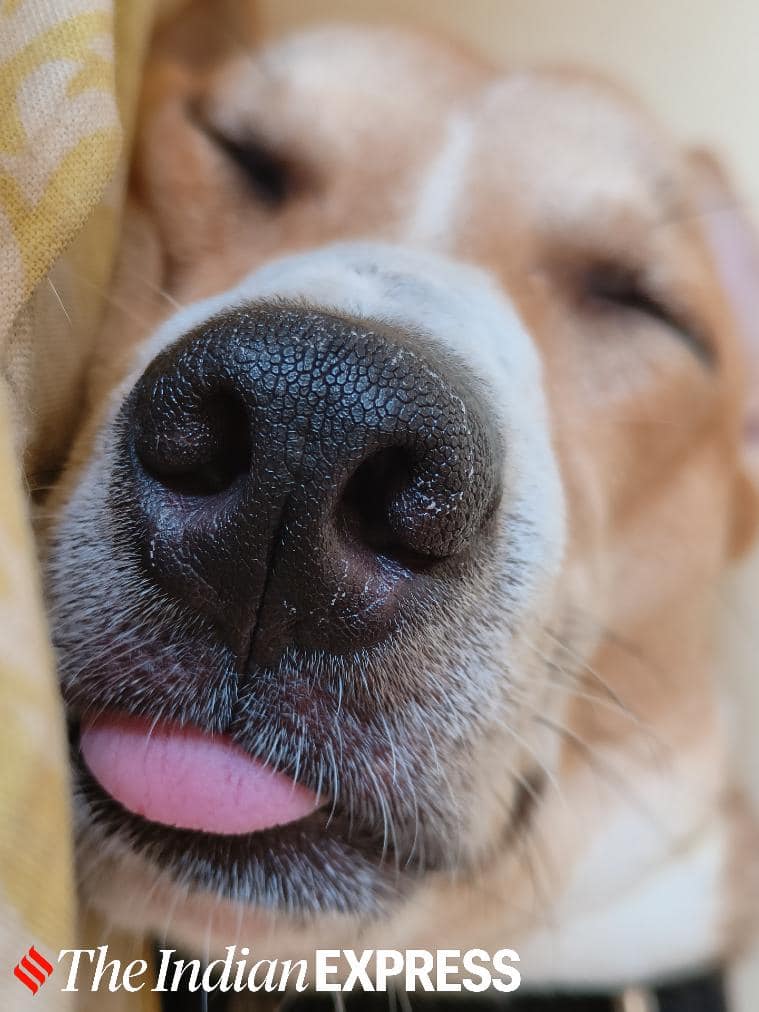 The phone does a great job of capturing details like the texture of my dog’s nose. (Image Source: The Indian Express/ Chetan Nayak) The device also does a good job of capturing fast-moving objects like this shaky plant in the wind. (Image Source: The Indian Express/ Chetan Nayak)

Pictures shot in both day and night had a lot of detail and colors had just the right amount of pop to them and did not appear to be unrealistic. At night and in low-light, the camera does a great job of eliminating noise. The result is pleasing photographs irrespective of the time of day and setting. 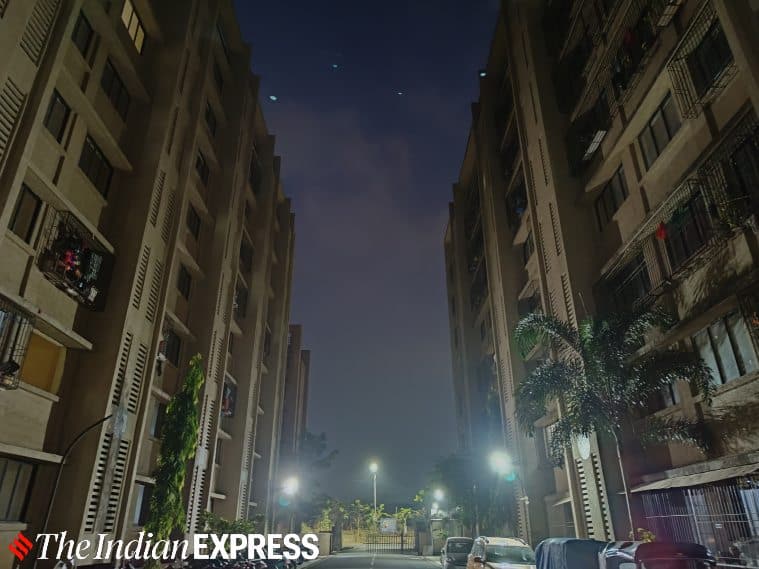 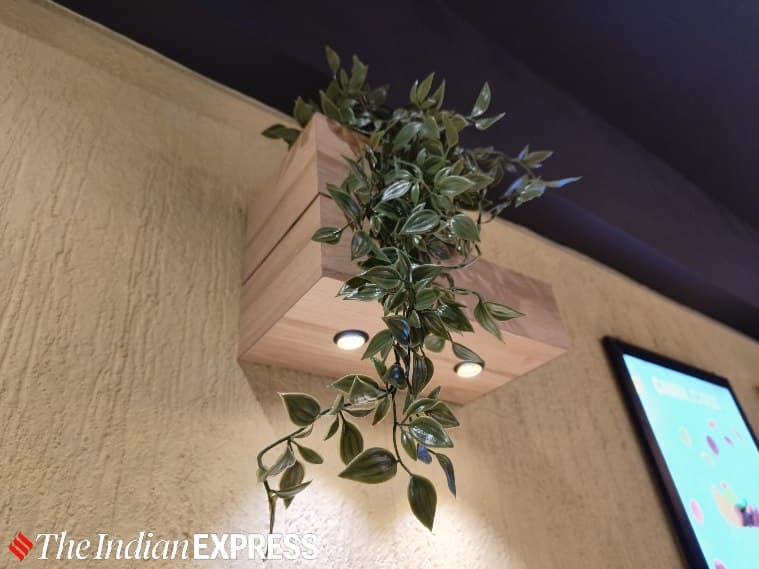 However, the ultrawide camera isn’t so great with night-time pictures so you may want to stick to the main sensor. The front camera is great during the day, capturing good amounts of detail and accurate skin tones, but low light selfies were often soft and lacked detail.

Before I get to the 150W fast charging, let me reiterate that there are two variants of the phone, the 80W charging variant that comes with a 5000mAh battery and the 150W variant that comes with a 4,500mAh battery. I would personally recommend the 5000mAh battery variant any day because an extra 500mAh of battery beats the minutes you’ll save with faster charging. I’m often traveling and rely on my phone for navigation, which is a serious battery drainer, so for me, the extra battery is a must. However, if you’re always close to a charging port and would prefer faster charging, the 150W variant is a good bet.

The 150W unit is unsurprisingly quick. Watching the phone climb multiple charging percentage digits on the lockscreen is no less than magic. Most users will end up with a half-charged battery within 10 minutes and a fully charged phone in between 17 and 20 minutes. 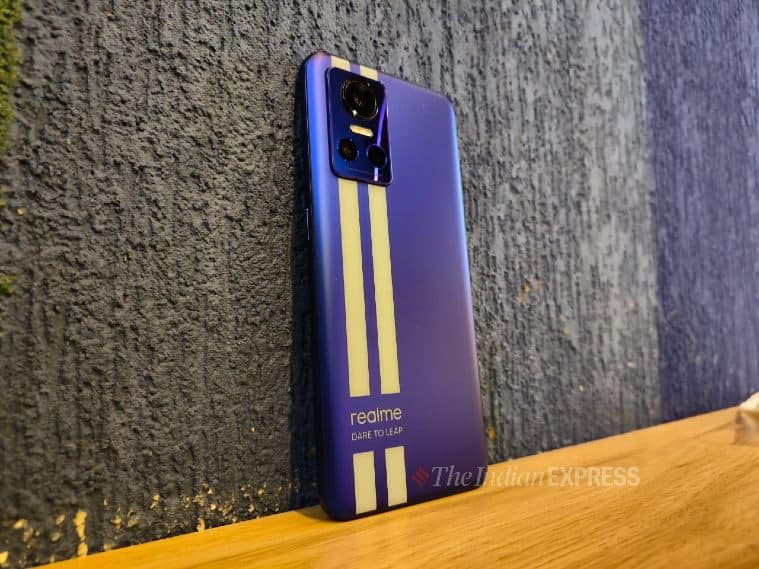 The device is also efficient once charged and users can easily pull a day’s usage here and you don’t even have to charge the phone at night. Plug it in before you brush your teeth next morning and by the time you’re dressed for work, you’re good to go.

The Dimensity 8100 chipset is one that ensures smooth performance, no matter how much you push the phone. It can handle multiple heavy applications with ease and felt fast throughout my testing. Both casual and resource-heavy games can also be enjoyed here just as easily. The FRealme GT Neo 3 also doesn’t heat much with day-to-day tasks.

Battlegrounds Mobile India only runs at up to HD graphics and high frame-rates here, which is a letdown. For a chipset that is in the league of flagships like the Snapdragon 800-series, I expected the device to run HDR graphics and Ultra frame rates. Weirdly, there are no such limitations with Genshin Impact, perhaps the most resource-intensive title on Android right now, which makes me wonder if this is simply a case of lack of optimisation. If that is the case, we should see a BGMI update in the future that unlocks higher graphical settings. For now, the phone is stuck at HDR/High.

The phone comes with Android 12 and Realme UI 3.0 out of the box. Realme UI is in its usual feature-packed avatar here and users get a lot of customization to set their phone exactly how they want it. However, it’s still sad to see a phone pegged to be a flagship come with multiple bloatware apps. Thankfully, you can get rid of most of these. The phone also will get only two years of Android updates, so that’s another not-so-flagship element right there.

I also found the fingerprint sensor placed way too low for a tall screen like this one. This meant someone with average hands like mine may find themselves shuffling hand positions at times to reach the sensor. The phone also skips on a headphone jack, which may be a disappointment for hardcore gamers who like to stick to wired earphones/headphone to eliminate latency.

The Realme GT Neo 3 is a promising package and doesn’t lack in many areas, except for the few hiccups that I have mentioned above. The device excels in charging, day-to-day performance, also packing a capable camera setup. This is an easy phone to recommend to most people looking for the flagship experience without spending too much.